Written by: Matt Joyce
Photos by: Will van Overbeek

Written by Matt Joyce, Photographs by Will van Overbeek | From the October 2015 issue | Updated: September 16, 2015 | Filed Under: Culturemade in texas 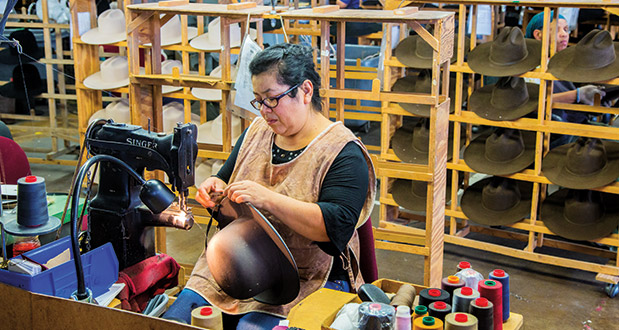 Amid the hiss and hum of century-old machines, hat-makers steam, press, and sew felt and straw into headwear both fashionable and utilitarian at the Hatco factory in Garland. Their craft hasn’t changed all that much since the early 1900s, when American men would no sooner leave home without a hat than without their pants.

In fact, some of these very machines made hats that found fame atop the heads of celebrities from Will Rogers to George Strait, and VIPs from Lyndon Johnson to Ronald Reagan.

“As we go through this tour, you’ll realize that we have a working museum,” says Dan Brown, vice president of Hatco, which today makes Stetson, Resistol, Dobbs, Charlie 1 Horse, and other brands. “Some of these presses were made at the turn of the century, and some of the sewing machines are from the ’20s and ’30s.”

This year, Hatco began offering guided walking tours of its 1938 plant in Garland—partly to provide an inside look at the hat-making process and partly to celebrate the 150th anniversary of Stetson Hats. Founded in Philadelphia in 1865, the John B. Stetson Hat Company dominated the hat industry for decades, hitting its peak in the 1920s with 5,000 employees and annual production of more than 2 million hats. Hatco acquired manufacturing rights to the Stetson brand in 1987 and moved production (along with some of Stetson’s old machinery) to its Garland plant in 2004.

“I have had so many people over the years coming in wanting a hat just like their grandfather’s, and fortunately, Stetson still makes hats like they did back in the ’20s,” says Abe Cortez, owner of Paris Hatters, a downtown San Antonio shop that’s been selling Stetsons since it opened in 1917. “Stetson keeps an eye on their quality at all times because they want to protect the integrity of the name, and they have. It’s held up very well.”

The Hatco tours meet in the factory’s outlet store, a 7,500-square-foot building filled with cowboy boots, Western apparel, and thousands of hats—felt and straw Westerns, fedoras, wool outdoors hats, and linen flat caps, among others.

First we watch a 10-minute video that recounts the history of Stetson back to 1850, when John Batterson Stetson left his New Jersey home for Colorado to mine gold in a climate that might ease his tuberculosis. Struggling in the harsh elements of the High Plains and Rocky Mountains, Stetson called upon the skills he had learned from his hat-maker father and used age-old felting techniques to make a water-repellent fabric out of rabbit fur. He made blankets at first, and then hats. He designed a wide brim to protect the face and neck, and a tall crown to trap warm air and provide insulation. Legend has it that Stetson sold his first hat, which he later dubbed “The Boss of the Plains,” to a mule driver for $5.

The tour then enters the 78,000-square-foot felt hat factory, where Brown passes around samples of beaver and rabbit fur, both of them soft and smooth to the touch. Hatco begins the hat-making process in its Longview plant, he explains, by felting 7.5- to 8.5-ounce bunches of fur into hat bodies using steam, suction, and a forming machine. The company then dyes the raw bodies, which look like felt cones, and delivers them to Garland.

The tour proceeds through the felt hat factory and the neighboring 23,000-square-foot straw factory. Brown says Hatco ships from 750,000 to 1 million hats per year, about 60 percent of them straw and 40 percent felt.

As we see the hats take shape, Brown explains the steps along the way. Craftsmen block the hats with wooden molds to give them their size and form, stiffen the felts with shellac (straw hats are stiffened with lacquer), and heat and press the hats to shape the brims and crease the crowns. Seamstresses sew in sweatbands and linings, and attach decorative bands with glue or bar tacks.

While the historical machines are impressive, making hats is a hands-on endeavor. Hatco employs about 400 people, many who have been there for decades and some from families that have worked in the plant for generations. And while the factory uses vintage equipment, Brown says Hatco is vigilant about improving its processes in the face of competition from hat-makers in the United States, Mexico, and China.

“You would think after 150 years, there wouldn’t be anything to change, but we’re changing daily,” Brown says, noting the recent addition of two chromometers to ensure consistent coloring of the hats.

Memorable anecdotes and insights emerge throughout the tour. Brown explains Hatco’s “X” system, a rating system for felt quality and price, from an “entry-level” rabbit felt 5X up to a 1,000X beaver and chinchilla felt with a gold-and-diamond buckle set. (Other hat companies also use X ratings, but there’s no industry standard for its meaning.) In the felt factory, we come across a stack of familiar-looking taupe hats with five-inch brims. Hatco makes these (in)famous Resistol cowboy hats for Texas State Troopers.

In the straw factory, we come across a batch of distressed hats with brims that swoop down over the eyes—Hatco makes them for country musician Brad Paisley’s Moonshine Spirit brand. Another group of hats are bedazzled with feathers and carved leather—it’s the Charlie 1 Horse brand that was popularized by racecar driver Richard Petty and that is a favorite among barrel racers on the rodeo circuit.

It’s nearly impossible to walk through the thousands of hats in the Hatco factory and not feel compelled to wear one home. Not convinced? Consider Brown’s favorite pitch: “It takes a confident person to wear a hat. You just have to put it on and go.”