True, Texas: What is it? Where is it? 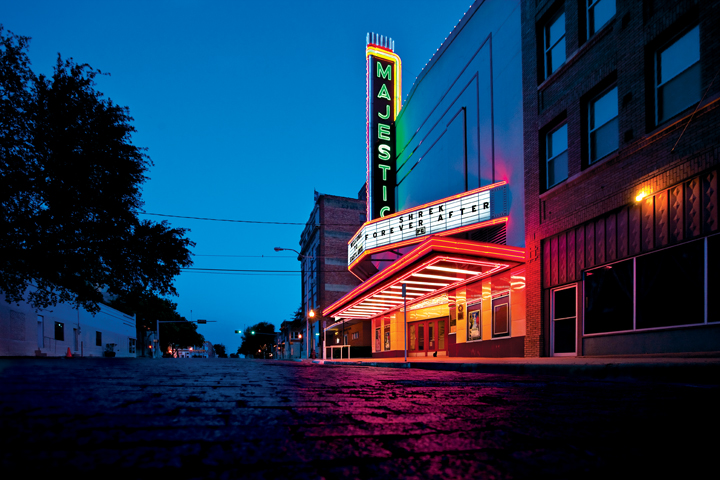 What is True, Texas?  The bold-faced greeting from a gleaming water tower. The creaky, timeworn floors of a rural dance hall. Local chatter and clatter from the kitchen at a road-side diner. The roar from fans in the stands at a high school football game. The whimsical fiberglass homage to the local mascot that you pass every day. All of these elements symbolize True—a collective community of the imagination.

True may be your hometown, or the one you wish you had.

Where is True, Texas? Experience the True community in towns as tiny as Fischer (pop. 20) or in bustling cities like El Paso (pop. 751,296). True comes to life in the architectural grandeur of the restored Donley County Courthouse, the community core of Clarendon; in the craftsmanship of bootmakers such as Henry Camargo in Mercedes; and in the echoes of laughter and applause resonating through Eastland’s Majestic Theater.

Of course, in a state as big as Texas, there are many more examples of that special state of being, construed to be the quintessential town of True.

Constructed in 1947 in the style known as “Tin Man,” Bandera’s 50,000-gallon water tower is emblematic of the water towers that stand sentry (both literally and figuratively) at the heart of many Texas towns.

Essentially a practical device for storing water, the tower also serves as a landmark and a unifying symbol for the community. Most water towers have the town’s name emblazoned on the side; many add the name and image of the high school mascot. Some bear a catchy slogan (“Remember Goliad”) or pay homage to a famous native son (“San Benito: Hometown of Freddy Fender”). A few towns have even designed their water towers to reflect local symbols (Luling’s watermelon, Poteet’s strawberry, Kermit’s frog).

How important is this municipal billboard? When the Bandera City Council decided to refurbish the town’s Tin Man in 2008, it initially declined to spend the extra money to repaint the local football team’s claim to fame on the side. A minor uprising ensued, boosters soon raised the necessary funds, and today, the words “State Champs 2002” still greet visitors driving in from the south.

“These magnificent governmental buildings reflect the independence and fortitude of a resolute people determined to create order and permanence out of a vast wilderness … ,” writes former U.S. Congressman and preservationist Michael Andrews in Historic Texas Courthouses (Bright Sky Press, 2006). And nowhere was such order better maintained than in the Donley County seat of Clarendon, founded in the late 1870s as a Christian Temperance Colony by a Methodist minister and his brother-in-law. With no saloons or other dens of debauchery, the Panhandle town earned the nickname “Saints’ Roost.” In the late 1880s, citizens moved the townsite six miles south to be next to the railroad, and along with other signs of a thriving community, the Donley County Courthouse soon appeared. The 1890 Romanesque Revival-style structure, built of St. Louis-pressed bricks and limestone, underwent extensive restoration in the early 2000s, which included reconstruction of the third floor and the return of a corner tower and other architectural details. The impressive edifice shines among the 230 historic Texas courthouses still serving as centers oflocal government—and symbols of community pride.

Proof that El Paso’s eclecticism extends beyond the multiculturalism you might expect in a thriving border city. Case in point: The funky and welcoming H&H Car Wash—an unlikely car-wash-diner founded by Syrian immigrants in 1958, serves some of the best carne picada in town (and offers an impeccable $12 carwash, to boot).  “Originally, we served sandwiches, burgers, and tacos,” says Maynard Haddad, who runs H&H with his brother Kenny. “But we focus now on Mexican food. A friend in Missouri told us about a cut of meat called tri-tip—that’s why our came picada is so good. We cut it in cubes, then cook it with tomatoes, onions, and jalapeflos.” Or maybe it’s so good because H&H hasn’t changed much in half a century—it still sports the same three turquoise tables and countertop, still the same 12 chrome barstools, still the same handwashed finish on your car. And El Paso still offers plenty of fun for the adventuresome traveler.

If you’re just looking for shelter as you travel from Point A to Point B, any nondescript lodging will do. But if atmosphere and amenities count, more sophisticated accommodations are in order. While grand structures such as Hotel Galvez in Galveston, or The Driskill Hotel in Austin, spring to mind, don’t discount the possibilities of a more intimate space. Especially if it’s an historic hotel in the rolling hills of picturesque Fayette County.

The 10-room Olle Hotel lies in Flatonia, a tiny town along Interstate 10, smack-dab between San Antonio and Houston. Constructed from 1899 to 1901, the two-story Colonial Revival-style building was first used as a hotel in 1915. (A wood-frame boardinghouse built in the early 1880s occupied the site until the current brick structure replaced it.) Otto and Agnes Olle purchased the building in 1926 and opened the original Olle Hotel, which operated until 1967.

Except for a brief time, the hotel then sat vacant until it reopened to enthusiastic visitors in 2005. Owner Kathryn Geesaman offers guests an intriguing combination of understated luxury and local flavor: pillow-top mattresses and pigs-in-a-blanket from a Czech bakery, signature fine toiletries and antique bathtubs, high-speed wireless internet and fresh flowers. Nearby diversions include artisan shops, museums, and painted churches. The restful, country setting will take you away …. 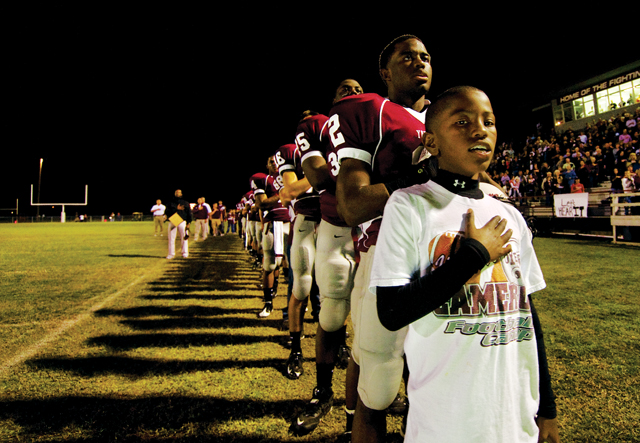 Texas high school football is a massively popular, all-inclusive enterprise. Its governing organization, the University Interscholastic League, includes well over 1,000 member schools. From cheerleaders and marching bands to team mascots and helmet logos, the game provides a tradition of touchdowns and town pride throughout the Lone Star State.

C.H. Yoe High School’s team, the Yoemen, serve as our representative example of this enduring fall favorite. Charles H. and Caroline (Carrie) Meyers Yoe were active philanthropists in the Milam County town of Cameron and financed a new high school in 1921.

C.H. Yoe preserves plenty of history with 30 district football championships, a state title in 1981, and an annual rivalry with neighboring Rockdale for the “Battle of the Bell.” More than half of the boys in Yoe’s student body are part of the team, which boasts a school mascot/ logo of a Robin Hoodstyle archer. The Houston Astros’ CEO Drayton McLane Jr. is a proud Cameron Yoe graduate.

Texas high school football season is on the way. As the Beach Boys suggested in their 1963 hit, be true to your school.

In 2007, Preservation Texas proclaimed historic small-town theaters as that year’s candidates for the state’s most endangered places. And Eastland’s Majestic Theater might easily have joined the ranks of other terminally endangered movie palaces except that a dedicated band of enterprising preservationists joined forces with the local government to take over the building more than 20 years ago and bring the operation back from the dead.

These days, through the guidance of the Eastland Fine Arts Association, the Majestic comes to life anew every Thursday through Monday night, casting its lavish neon spell on moviegoers.The Majestic is rather more grand than most smalltown theaters, in part because town father C.U. Connellee first built it as a performance venue for variety shows during Eastland’s original boom years of the 1920s. Because of that early grandeur and the addition of the multistory marquee in the late 1940s, the Majestic can seat 800 customers (although 500 ticket sales now define a good weekend). 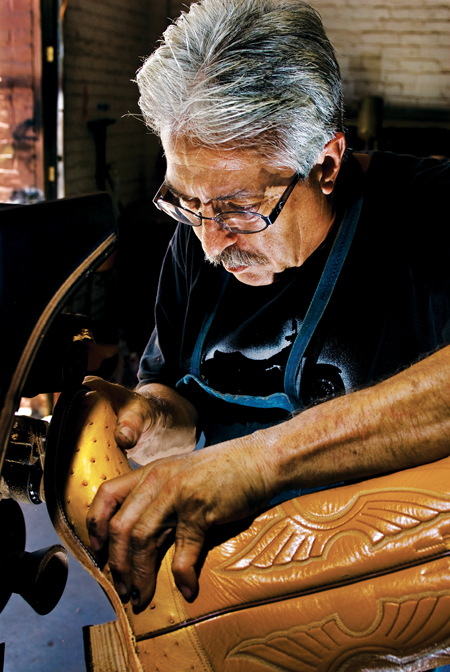 Texas is home to dozens of outstanding custom bootmakers, like Henry Camargo of Mercedes. (Photo by J. Griffis Smith)

Texas is home to dozens of outstanding custom bootmakers, and the image of the single artisan practicing his or her personal brand of magic at an individual workbench stands clear as an embodiment of the small-town state of mind.

Today’s bootmaking operations often focus as much on flash and glamour as they do on practical bootmaking. Even so, a family-owned boot shop is the antithesis of the assembly line of mechanized construction, and the door to the shop opens onto a world where time is reckoned differently than it is in any kind of contemporary digital framework.

Even though movie stars and business moguls spend thousands on a one-of-a-kind pair of boots, some bootmakers offer custom options that fit the average person’s budget.

Of course, the custom bootmaker serves a different market than the typical shoe repairman, or the harness maker of times gone by. Stories abound about how the early bootmakers set up shop along the cattle trails. When cowboys came through headed in one direction, the bootmaker would measure their feet. When the trail riders returned on the way home, their boots would be ready. It’s reassuring to know that artisans still establish personal relationships—and preserve their ties to history—today.

When you walk through the screen doors of T.C. Lindsey & Company General Store, brace yourself for a captivating trip back in time. Since the store opened in 1847, some important things have stayed the same—regulars keep coming to this heart of Jonesville, and tourists still find their way here to absorb its anachronistic essence. The store, started by town namesake William Jones, has been in the Vaughan family (T.C. Lindsey was an in-law) since 1870. Today part general store and part museum, T.C. Lindsey features well-stocked aisles with run-of-the-mill goods and a few hard-to-find items such as old tools, bonnets, rare jellies, and hoop cheese portioned with a 100-year-old cutter.

Look beyond the tool-lined walls to discover a mesmerizing lair of antiques. The museum’s collection began with a few rusty farm tools in the 1960s; it now features thousands of items, including farming equipment and outmoded household items, from an old cotton gin to a well-worn dentist’s chair.

Back on the front porch, the echoes of conversations from Texas’ early days are almost palpable. From here, it’s clear that T.C. Lindsey & Company continues to embrace its simple authenticity.

Sightseers exploring the famous Devil’s Backbone, the scenic stretch of Farm-to-Market 32 between FM 12 and Blanco on the western edge of the Hill Country, often stop midway at the former trading-post town of Fischer (population today, fewer than 20) to wonder about its barn-style, whitewashed dance hall. Erected in the late 1800s by the Fischer Agricultural Society as a community gathering spot, Fischer Hall still serves as a venue for weddings, reunions, and other social events. If you’re lucky enough to receive an invitation to an event held here, or to chance into an ad hoc tour (ask at the adjacent nine-pin bowling alley), don’t miss the opportunity to tour this relic from Central Texas’ rural history. Inside the simple hall, there are no central support beams; instead, the builders relied on a German method of using laminated, curved wooden arches on the ceiling-an architectural style that lends itself to unimpeded dancing.

Muleshoe. Memorable, fun to imagine, and a name that conjures up multiple Clint Eastwood Westerns.

The iconic symbol of the West Texas town of Muleshoe is the lovable, mighty mule, of course. And, Muleshoe has the tangible artifacts to honor its famous beast of burden: an impressive, life-size memorial that begs a photo; a muleshoe archway at the Muleshoe Heritage Center; and Benny Douglas Stadium, where the Muleshoe High School Mules make playoff runs (they were the undefeated 2008 2A, Division 1 football state champions). It all makes for a celebratory combination of happy horse “whinny” and delighted donkey “hee haw,” a good kick, and a Lone Star State salute.

Smart, stubborn, and tough, the mule is cool.

What does True, Texas, mean to you? Write us at [email protected] highways.com or find us on Facebook or Twitter.