A Sense of Plates

Comfort Food with a Side of Nostalgia at Po Po Restaurant 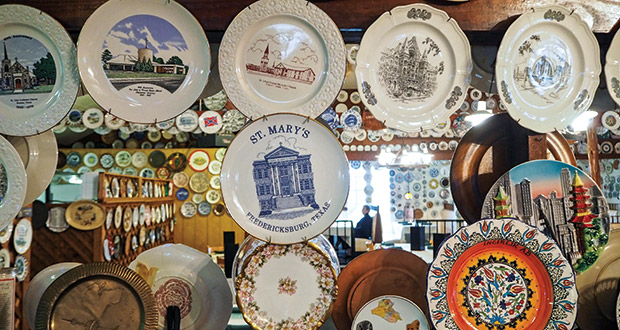 As a road-trip enthusiast with more than a few miles on my trusty Honda, one of my favorite things about traversing this expansive state is discovering new roadside stops, particularly of the edible persuasion.

Discover Welfare Cafe in a small town with rich flavor.

A pleasant 40-minute jaunt northwest of San Antonio on Interstate 10 will lead to the exit for the community of Welfare, where the feeder lane quickly turns into an unassuming country road leading right up to Po Po Restaurant, a welcome sight for hungry eyes.

The building’s weathered stone facade and maroon-striped awnings contrast with the red neon of capital letters on a sign announcing “EATS.” Below the sign, an equally straightforward explanation reads “CHICKEN STEAKS SEAFOOD,” and the entire scene is framed by the branches of a rather protective-looking live oak.

But nothing can prepare a first-time visitor for the scene inside: thousands of mismatched plates, suspended in meticulous rows across the walls, dividers, and ceiling beams. And just when you think you’ve taken it all in, you realize you’re still in the lobby and the fantastically obsessive collection continues in the dining room.

Despite the busy decor, the ambience inside Po Po is surprisingly Zen. Big-band music plays softly while dining partners chat leisurely in cream-colored, diamond-tufted booths as Tiffany lamps cast a warm glow above heaping plates of comfort food. This is a place where you’re meant to settle in and stay awhile, and the staff lets you know it as you enter. A sign on the door reads:

“Welcome to Po Po Family Restaurant. We are not fast! We try very hard to be good, cheerful and courteous, but we are not fast! For fast, go to New York. Here we are south of the ‘tension line.’ So relax. Take time to smell the flowers. And give us the time to prepare your order with tender loving care.”

But this spacious dining room, with its high ceilings and sunlight filtering in through large French windows, was not always a place of peace and quiet. It was originally the Nelson Dance Hall, opened by rancher Edwin Nelson in 1929 (as evidenced by the discreet keystone above the entrance).

A platform at the back (now a row of elevated tables) indicates the location of a stage where bands used to play. The lobby where hostesses now heartily greet each guest was once a reception area where soda pop and hamburgers sold for five cents apiece. And while Po Po now boasts a full bar and cocktail list, the original dancehall saw its heyday during Prohibition. (Back in those days, I’m told, obtaining alcohol was as easy as purchasing moonshine by the shot or gallon from a bootlegger just outside the entrance.)

But after the Great Depression hit and the economy continued to worsen, most visitors could no longer afford the gas to make it out to the dance hall, let alone food, drink, or tips for the band. Nelson Dance Hall shuttered until a rancher named Edwin “Ned” Houston came along in the early 1930s and purchased the space, renaming it Po Po Cafe. Houston was known for exporting cattle and mules to Latin America, and it is said that the quirky name Po Po was an abbreviation of Popocátepetl, Mexico’s storied active volcano.

The restaurant changed hands several more times before 1950, when German immigrants Luther and Marie Burgon left their dairy farm in Minnesota to buy land in Texas, acquiring the property where Po Po was located.

“That’s when it became the family restaurant it is today,” says Sam Bournias, Po Po’s current owner. “Ma” Burgon, as Bournias fondly refers to her, developed the recipes for both Po Po’s exquisitely crunchy fried chicken (which she claimed to have shared with Bill Church, who went on to open Church’s Chicken in San Antonio) and the popular chicken-fried steak.

“But you would have to specifically ask for gravy on the side because Mr. Burgon would not allow it to be served on the steak,” says Bournias. “He was from Germany, where they had schnitzel, and schnitzel didn’t come with gravy unless you did a jägerschnitzel, and even then it wasn’t a cream gravy.”

Though Bournias never had the pleasure of meeting Ma and Luther Burgon, their daughter Ileen worked at the restaurant until she passed away a few years ago, and their granddaughter Carol still drops in from time to time. Both have kept the Burgons’ legacy alive through the years.

For years, Ma and Ileen worked side by side in the kitchen and baked treats for the restaurant out of their house next door. “Ileen said she could remember back when they’d have to sleep on the floor because they’d have so many cookie sheets everywhere— on the bed, on the tables, on the kitchen countertop,” says Bournias. “Cookies everywhere! That was back in the day, when they could do that, of course.”

Bournias, who bought Po Po in 2004, had been working in the hotel and restaurant business for more than 20 years, in both Dallas and San Antonio, when he decided he wanted to run his own establishment. “So I started looking around and found a place that was for sale,” he says, “and the first time I walked in here, I said, ‘I think I’m home! I think this is where I want to be for awhile.’”

Since Bournias came aboard, he has made a few changes to the restaurant, such as switching to USDA choice steak and sourcing seafood from Texas vendors in the Gulf of Mexico. These days, instead of offering homemade German baked goods, cooks make their own cobbler and bread pudding from scratch. Soon, Bournias hopes to build a new banquet room to replace the current one. “It was a pole barn where you store hay and they just put walls up. It’s not really meant to be a banquet room,” says Bournias. “You can only put lipstick on a cow for so long!”

Now that 2,346 plates adorn just about every inch of space in the restaurant, another several hundred have started to accumulate in the current banquet hall. The collection began when the Burgons closed the restaurant each June and traveled around the world, returning with souvenirs in the form of plates. Guests continue to add to the treasury, some shipping dishes from across the globe and others making a pilgrimage to Po Po to carefully unwrap an heirloom they wish to donate.

“People bring in all sorts of different plates that mean something to them,” says Bournias. “They understand that, unless somebody takes a crazy elbow to it, it’s going to be here for a long, long time.”