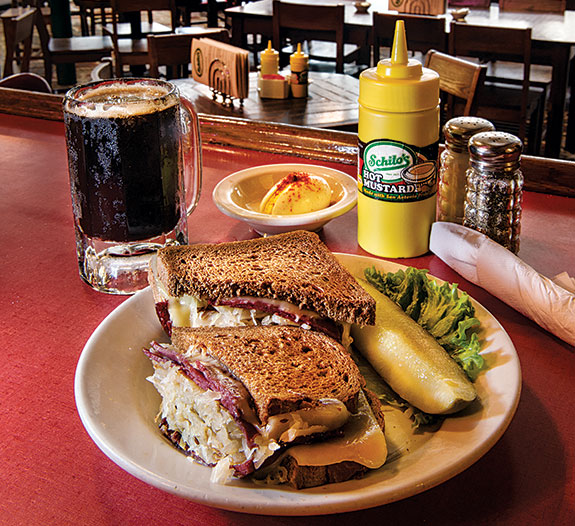 San Antonio has so many historic places it could take an out-of-towner a lifetime of visits to see them all. I made dozens of Alamo pilgrimages over a half-century before I discovered one of the city’s tastiest—and most historic—locales: Schilo’s Delicatessen, on Commerce Street just west of the famous Commerce Street bridge and within bugle range of the Alamo itself.

Celebrating its 97th year as a San Antonio restaurant, Schilo’s claims to be the oldest operational eatery in town. German immigrant Papa Fritz Schilo opened Schilo’s saloon in Beeville in the early 1900s and moved the business to San Antonio in 1914. He began serving food a few years later when the 18th Amendment outlawed the sale of alcohol.

“We still have what we believe are Mrs. Schilo’s original recipes,” says Bill Lyons, whose family bought the traditional German deli from Papa Fritz’s daughters in 1980. Open Monday through Saturday for breakfast, lunch, and dinner, Schilo’s serves up bratwurst, wienerschnitzel, braunschweiger, and other authentic German fare. For less adventurous diners, the restaurant offers more Americanized vittles, such as bacon and eggs, hamburgers, and beef stew. The “Papa Fritz” sandwich combines ham and turkey with Swiss and American cheeses.

Pronounced “Shee-lohs,” the deli boasts of world renown for its split pea soup, homemade root beer, Reuben sandwiches (corned beef, sauerkraut, and Swiss cheese), and hot mustard. “When Prohibition hit and San Antonio Germans could no longer savor their schooners of beer, Papa Fritz developed a supercharged recipe for root beer,” Lyons says. “Our root beer is made by Son Beverages of San Antonio using the same formula, and we add egg whites to give it that special Papa Fritz kick.”

Judy Julian, a Schilo’s regular and fan of the restaurant’s root beer, describes it this way: “It’s full-bodied and creamy, with a stronger root-beer flavor than most,” she says. “It’s sweet but not overly so.”

After doing business at a couple of other locations in San Antonio, Schilo’s moved to its present address in 1942. Constructed decades earlier as a bank called Mayo Money Exchange, the building also served as a pet store before the deli moved in. It retains the vintage tile floor, pressed tin ceiling, and wood and limestone interior that contribute to an atmosphere of Old World charm. The former bank vault now serves as the restaurant’s walk-in refrigerator.

“Though we can’t document it, we believe the antique mirrored oak bar is from Papa Fritz’s first saloon in Beeville,” Lyons adds. “And many of the tables and chairs are from San Antonio’s Original Mexican Restaurant, operated by the Farnsworth family on Losoya Street from 1899 to 1959. The three oak booths nearest the street came from a late 1800s ice cream parlor, and the antiques collector who sold them to us said that before that, they were in a Class A bawdy house in San Antonio’s red light district.” Pointing to the words “Lillian the rat” carved into one of the booths, Lyons explains that back in the day, San Antonio authorities classified local houses of ill repute as being Class A, B, or C. Lillian, he surmises, was a madame who must have done something to anger the carver.

Historic photos of San Antonio people and scenes adorn the restaurant walls, including a 1910 panoramic image of the Pearl Brewery, along with framed vintage postcards from Germany.

Papa Fritz Schilo’s nephew, 87-year-old Forest Rees, visits the restaurant whenever he can, although he now lives in Fredericksburg. He points out that a photo of the founder near the cash register still gazes out upon his roomful of diners. “I grew up around Schilo’s, and my mother worked there for about 53 years,” Rees says. “She could speak German, and she had a shortwave radio on which she monitored the insane ravings of Adolf Hitler. So when she saw how the war was going, she had the foresight to order enough Swiss cheese to last the duration of the war. They kept it cool in the restaurant’s basement.”

Rees recalls the traditional extra step that made Schilo’s split pea soup so special. “They had someone come in early every day and debone a ham,” he explains. “Then they would put the bones into the soup.” Today, the hearty, creamy concoction, which is served with a slice of rye bread, is a warming cup that’s equally as satisfying on a cold or hot day. Ham bones are no longer part of the preparation, but the current recipe calls for a helping of bacon drippings.

Though his family name is Irish, Lyons’ heritage is three-quarters German. “My father spoke German until he was 12 years old,” Lyons says. “And we used to have some World War II brides—German ladies who’d married American G.I.’s—working here as waitresses. They found comfort in the German atmosphere.”

The Lyons, who also own the now-historic Casa Rio Mexican restaurant on the River Walk, exemplify the sense of multiculturalism that distinguishes San Antonio. It’s a proud tradition at Schilo’s. Rees notes that Papa Fritz was something of a multicultural pioneer himself. “They developed a special kosher potato salad,” he says. “And Schilo’s was the first place in San Antonio to routinely serve kosher foods. That’s something for a German delicatessen.”