Belle of the Brazos

Frech Country Fare at the Brazos Belle in Burton 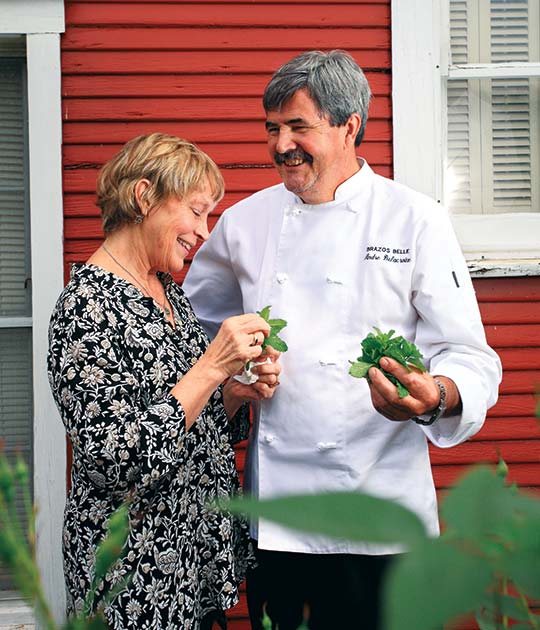 When you think of romantic French country fare, the Central Texas town of Burton (pop. 302) may not immediately come to mind. Yet this blink-and-you’ll-miss-it burg, situated on US 290 amid the pastoral rolling hills of Washington County, is home to the Brazos Belle—a cozy weekend bistro serving French-inspired cuisine in a former 1871 general store.

On a typical evening, the aroma of simmering garlic and savory herbs greets visitors as they walk on creaky pine floors past an antique bar to the dining room, which is furnished with simple wooden tables and ladderback chairs. Framed avian prints, Old-World landscapes, and vintage maps of Texas and France hang on the blue-gray walls, and a glass case filled with antique farming implements speaks to the building’s period as a general store. Brass chandeliers bathe the interior in a diffused, romantic glow.

Just after twilight, the Saturday-evening diners start drifting in. Before long, the dining room bustles with a mix of groups enjoying conversation, families celebrating special occasions, and couples tucked into intimate corner tables. In between courses, Chef Andre Delacroix emerges from the kitchen to walk the dining room in his white chef’s coat, greeting diners with a warm smile. In fact, the Brazos Belle has a fair contingent of regulars. Andre says that after 20 years, he can recognize many diners simply by their ticket. “I know my customers,” he says. “Sometimes when a member of our wait staff brings the order to the kitchen, I know who’s there by what they’re eating.”

Growing up in Tricot, France—a small agrarian village in the Picardy region north of Paris—Andre developed an appreciation for garden-fresh ingredients from an early age. “We had rabbits, chickens, eggs, and vegetables. Everything was from the garden. Everything was fresh,” he says.

As a teenager, Andre apprenticed at local restaurants and then later served in the French army as a cook. Next, he worked at the upscale restaurant Georges V in Paris, where he prepped, cured, and marinated meats and made sausages and patés. He later spent five years as a chef with Club Med. “Every six months I moved and met a new team of people,” he says. “Different country. Different culture.” In the late 1970s, he met his wife, Sandy, and the couple eventually moved to Houston, where Andre served as the chef de cuisine at the Four Seasons hotel.

In 1989, the couple was searching for a weekend home in Burton when they learned that one of the town’s oldest downtown buildings—the home of a former restaurant called the Brazos Belle—was for sale. Andre and Sandy had dined there years ago, and as they surveyed the vacant space, inspiration struck. They decided to buy it, gradually fix it up, keep the nostalgic name, and open their own restaurant.

In 1993, all that hard work paid off, and they reopened the Brazos Belle.

Colored by the culinary traditions of his childhood, Chef Andre employs classic French techniques, but he emphasizes lighter ingredients than the heavy cream and butter some people associate with French fare. For example, he coaxes lush flavors with herbs and red wine. He hand-selects his vegetables every week from local and Houston-area markets, and he harvests herbs and seasonal vegetables from his home garden in Burton. His staff cooks beef bones for up to 36 hours to make a base for sauces and soups. “It’s a lot of labor, but it’s worth it,” Andre says.

The Brazos Belle’s menu features a small but carefully chosen medley of beef, pork, fish, and chicken selections, along with a wine list with choices from Oregon, California, Australia, and Europe. Dining highlights include French comfort classics like duck-and-sausage cassoulet and lighter choices such as garlic chicken and lemongrass salmon with tomatoes and capers.

Seated at a romantic window table on a recent visit, my wife, Beth, and I started our meal with a basket of fresh bread, a crisp salad with house vinaigrette, and the paté maison—a savory country paté served with mustard, cornichons, and toast points. For our main courses, I opted for the steak au poivre verte, a perfectly cooked beef filet
topped with a sauce punctuated by whole green peppercorns and paired with roasted vegetables and potatoes. Beth set her sights on the baron d’agneau, a tender grilled lamb loin with a savory crust of herbs and Dijon mustard, rounded off with seasoned rice and baked tomatoes topped with breadcrumbs and Parmesan cheese.

For dessert, we shared the chocolate mousse, whose sweetness was complemented by a tangy layer of orange glaze. Reveling in each spoonful, we pretended to be civil as we insisted the other take the last bite.