The skinny on a Texas classic 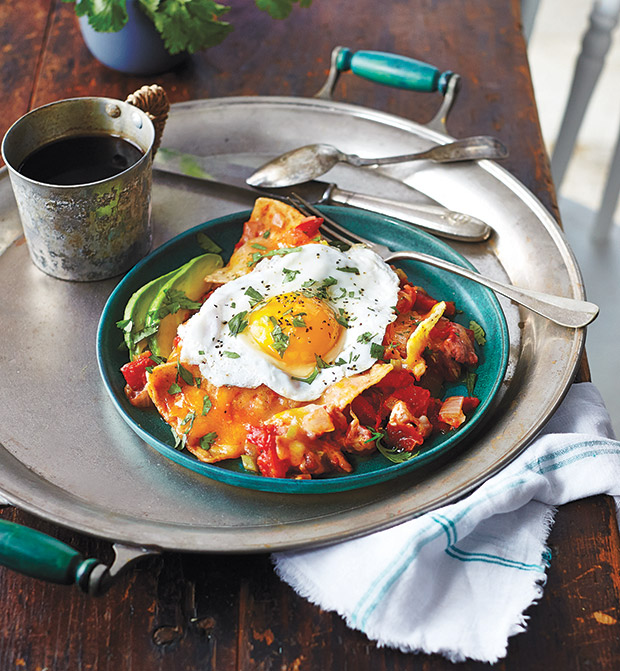 In Texas Highways’ new Plates/Cook department, which debuts with this story, we’ll aim to explore Texas’ vast culture of cooking—including recipes, techniques, and tips—and we think there’s no better place to kick it off than with fourth-generation Texan Jessica Dupuy’s latest cookbook, United Tastes of Texas: Authentic Recipes from All Corners of the Lone Star State.

Originally, Dupuy tells us, the publisher approached her about writing a Tex-Mex book. “Instead,” she says, “I suggested that it would be much better to look at the state from a historical perspective, organized around how and where it was settled. Tex-Mex is only a fraction of what our food is about.”

And so United Tastes—divided into the state’s five distinct culinary regions (Central, Coastal, East, South, and West)—presents a geographical guide to recipes and techniques any true Texan should have on hand, ranging from San Antonio puffy tacos to Texas pralines (crunchy, never chewy!). The list includes chilaquiles, a classic Mexican breakfast casserole that proves supremely adaptable. “Chilaquiles are all about using leftovers,” says Dupuy, whose recipe (see page 31) highlights the satisfying alchemy of tortilla chips, tomatoes, cheese, eggs, and jalapeño. “I like it because it’s easy, and it’s a way to spice up your average fried eggs for breakfast,” says Dupuy. “Once you get a feel for it, you can be creative.”

A lot of the recipes in United Tastes are family recipes, including a beef brisket recipe passed down by Dupuy’s father and gumbo and jambalaya concoctions from her husband’s kin in Louisiana. “Food is about coming together,” says Dupuy. “In my family, when we plan a gathering, the first question everybody asks is, ‘What are we going to eat and who’s bringing what?’” Fittingly, the book’s final chapter, “Texas Shindigs,” includes a lineup of cocktail recipes featuring Texas ingredients followed by suggested menu items for gatherings on Thanksgiving, Christmas, and other holidays.

Throughout the course of her research, Dupuy unearthed a cornucopia of misunderstandings about Texas cuisine, as well as a few things that Texans take for granted in the kitchen—or at the grill. “I went with my dad’s brisket recipe because it’s what I grew up with,” says Dupuy. “And when I sent it off to the test kitchen, I said that it’s imperative we use an offset smoker. That became a bone of contention, and finally I told them that I would be kicked out of the state and written out of my dad’s will if we didn’t.”

Texas’ culinary pride revealed its multicultural complexity as Dupuy investigated chili (the state dish; no beans here, please!) potato salad (mustard-based or oil-based?), the nebulous history surrounding the classic King Ranch Chicken casserole (it’s not from the King Ranch, y’all), and seemingly simple dishes like the nacho. “Contrary to what many may think,” writes Dupuy, “an authentic nacho is a simple tortilla chip topped with a slice of Cheddar cheese and, oftentimes, a slice of fresh or pickled jalapeño. That’s it.”

And what about the popular Texas tradition of eating black-eyed peas on New Year’s Day for good luck? Not only does Dupuy highlight the work of New Yorker-turned-Texan Helen Corbitt in elevating the humble black-eyed pea to society status with her famous “Texas Caviar” recipe, but she also credits the late pea-lover (and father of actor Rip Torn) Elmore Torn of Taylor with reviving the “eat peas for good luck” tradition as part of his founding role in the International Black-Eyed Pea Appreciation Society.

“One of my favorite chefs to interview was Melissa Guerra,” says Dupuy. “Her ranch in South Texas has been part of Mexico and then part of the United States multiple times in its history.” Guerra, who has written several cookbooks herself and operates a housewares shop in San Antonio called Latin Kitchen Market, contributed her family recipe for tamales, which makes three dozen. And so Dupuy faced another challenge in the test kitchen, as it’s unusual for cookbooks to feature recipes that make three dozen of anything. “We couldn’t tweak the recipe so it makes a dozen,” Dupuy says. “That would undermine the whole reason that people make tamales! Tamales are very much about getting together as a community.”

Melissa Guerra receives a dedicated profile in the book, where she shares her view of the evolution of South Texas cuisine, noting,“Food has always been about more than sustenance. It has a story to tell. It follows the history of what kept people alive, not what killed them.” Other chef profiles include Jack Allen of Austin, Johnny Hernandez of San Antonio, and Buffalo Gap chuckwagon chef Tom Perini, who says, “When you get a good piece of beef, season it with a little rub and cook it over a mesquite flame. All of a sudden, you have something magical.” Seventh-generation rancher/chef Lou Lambert weighs in, too, noting of his stints in New York and Chicago: “Being away from home made me realize what a rich food culture we really have in Texas.”

Join us as we explore that rich food culture. There’s a spot for you at the table.

It would be a noble exercise to compare chilaquiles in every restaurant across the state, but the research would take a lifetime or more. And if you ask 100 people what makes a good plate of chilaquiles, you’ll get 100 answers. The chilaquiles at Paco’s Tacos in Austin, a ramshackle joint on 51st Street just north of the Dell Children’s Medical Center, are just about perfect. Strips of corn tortillas are lightly fried in oil then simmered in a blend of the restaurant’s green and red salsas until they’re soft but still maintain texture (the “al dente” of tortillas), then served with an egg over-easy and a choice of rice or refried beans. Are chilaquiles the Frito pie of breakfast fare? You be the judge.

As Jessica Dupuy writes in her book, United Tastes of Texas, the only complicated thing about chilaquiles—
pronounced roughly as “chill-ah-kee-les”—is its name. Dupuy makes the point that the flavor is similar to nachos, though I’d say it’s more like “breakfast Frito pie.” This recipe is slightly adapted from the recipe in the book.

1. Preheat oven to 350 degrees. In a large, nonstick skillet over medium-high heat, sauté onion, jalapeño peppers, and garlic in 2 T. oil for 5 minutes or until tender. Stir in tomatoes, reduce heat to medium, and cook 10 minutes until thickened.

4. Meanwhile, heat 1 T. oil in a large, nonstick skillet over medium heat. Gently break 4 eggs into the skillet and cook 2-3 minutes or to desired degree of doneness. Remove from skillet and repeat with remaining eggs and oil.

5. Cut casserole into 8 squares, and top each with a fried egg. Serve warm with salsa, avocado, cilantro, and other toppings as desired.

Find United Tastes of Texas: Authentic Recipes from All Corners of the Lone Star State (Oxmoor House, an imprint of Time Inc. Books) at bookstores or online.

SidesMain CoursesDessertsDrinks
From the August 2016 issue