At Nostalgia in Bowie, lunch comes with a side of Antiques

Written by: Scott Jarrett
Photos by: Will van Overbeek 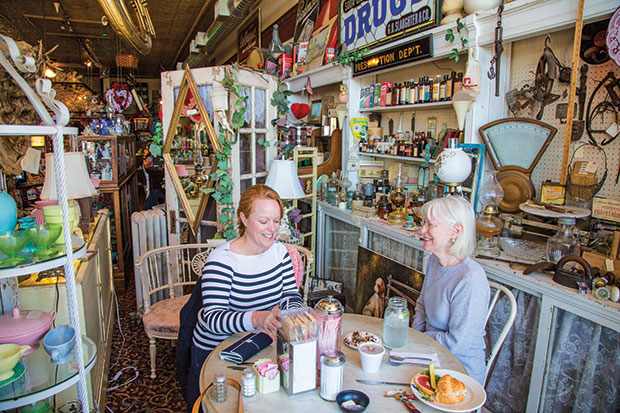 Thousands of antiques, ranging from milk-glass lamps to vintage medicine bottles, inspire lunchtime conversation. The honey for sale at Nostalgia comes from a local beekeeper.

I’m standing with my wife and young son in front of Nostalgia Antiques/Soda Fountain in Bowie, a town some 47 miles west of Gainesville, when it hits me: Should we really take our eight-year-old into an antiques shop?

My better judgment says no, but the lure of old-fashioned sodas and other edible delights is too much. We push through a pair of wood-and-beveled-glass doors and find ourselves in an 1890s time warp.

To our left are shelves of antique pottery and knickknacks behind a dozen or so café tables with mismatched chairs; to our right is a timeworn pine countertop that stretches nearly 18 feet. Co-owner Lanny Hunt welcomes us and leads us to “The Coke Box Table,” named because it sits just behind a working 1960s Coke machine, which Hunt bought from a drugstore in nearby Ringgold. It is one of hundreds of relics at Nostalgia that prompt an, “Oh yeah … I remember that!”

As country tunes from the ’40s and ’50s emanate from hidden speakers (was that Kitty Wells singing about honky-tonk angels?), we order a trio of Nostalgia’s signature sodas, which the Nostalgia staff create using classic recipes: a cherry-vanilla Coke for me and vanilla cream sodas for my son Christopher and my wife, Ani. They arrive in quart-size Mason jars, loaded with ice and mixed with the perfect balance of slight fizz and flavorful syrup.

The building’s original proprietor, a doctor’s son named Tubby Wilson, ran a pharmacy and soda fountain in the same spot in 1894. He was famous for a drink called the “Old 400,” and I imagine he would be proud that it’s still a popular spot for sodas and other treats. Nostalgia honors Wilson’s memory by replicating the Old 400 recipe for modern diners, who rave about the combination of crushed ice, ice cream, and milk served with whipped cream, nuts, and a cherry. After Wilson died in 1961, the building briefly housed a shoe store and a dress shop, then sat idle until 1993, when Hunt and a local pastor named Larry Cox purchased it and brought it back to life.

Both Cox and Hunt still enjoy finding treasures for Nostalgia at area estate sales, though these days some of their inventory comes from “pickers” throughout North Texas.

The pair had met at church and discovered a mutual love of antiques, and they aimed to restore the structure as much as possible to its 1890s condition. Though the old marble countertop was long gone, they knocked out a dropped ceiling to showcase the original pressed tin. They also tracked down and reinstalled the original transom and front doors bearing the mortar and pestle stenciling from Tubby Wilson’s pharmacy era, as well as an ad for Pangburn’s Candy in Fort Worth. Still, they weren’t completely sure what they’d do with the space.

“This was just going to be a little antiques store,” says Cox, explaining that memories of his grandparents’ mercantile store in Georgia inspired him to add food and drinks.

Both Cox and Hunt still enjoy finding treasures for Nostalgia at area estate sales, though these days some of their inventory comes from “pickers” throughout North Texas. “Lanny kind of buys 40 miles that way,” says Cox, motioning west toward Wichita Falls. “And I buy this way. That way we don’t cross territories.”

Today, Nostalgia serves many roles: part café (free coffee) and part town museum (its flashiest artifact is a 20-foot mural, painted for the 1936 Texas Centennial, that features the now-defunct M. Johnson Poultry Ranch, once one of the largest such operations in the world). It’s also an informal community center and a favorite for post-church gatherings and ladies’ groups. “A whole lot of hugs get handed out here,” says local florist Sue Awne.

Many big groups choose to gather around an 18-foot, late-1800s oak harvest table known as “The Heard,” named after the local hardware store it came from. Cox points out a weathered hand-written sign nailed on its side: “Mule Shoes: 11 1/2 cents.”

Soon, our lunch orders are ready, and Cox delivers them himself. My stew, loaded with carrots, onions, potatoes, peas, and chunks of beef, has just the right dash of pepper. My son’s turkey-and-Swiss sandwich comes with a little plastic sword piercing a watermelon triangle, which makes him smile. And my wife gets a sandwich called the “Famous Stack Up”—turkey, ham, bacon, and beef topped with lettuce, tomatoes, onions, and Swiss and American cheeses. A bite tells me why it’s one of Nostalgia’s best sellers, though other classics like the Reuben and club sandwiches also rank high. 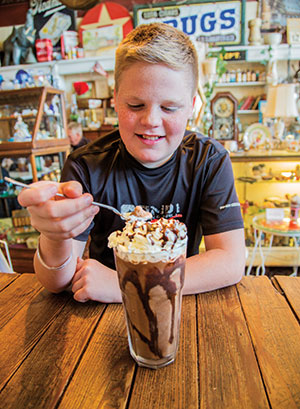 A milk shake called the “Old 400” honors the legacy of pharmacist Tubby Wilson, who served a similar ice-cream concoction in this building more than a century ago.

After lunch, Hunt encourages us to explore (and even touch) some of the antiques, and I love the sense that I am burrowing through my grandparents’ attic. Deep in Nostalgia’s recesses, my son and I discover a British phone booth plastered with signatures; somehow (with Hunt’s encouragement) he finds space to add his own. I show him an old-fashioned apple corer and we have fun thumbing through vintage family portraits and a Radio Orphan Annie Secret Society booklet.

Our treasure hunt is the perfect break before dessert. We go for warm banana pudding subtly flavored with vanilla. We also try Nostalgia’s trademark: bread pudding made daily from Cox’s grandmother’s recipe. It is spongy and slightly cinnamony, and it’s served warm and topped with rich caramel sauce.

Eyeing my son’s three-scoop banana split, which is served in a glass dish and laden with pineapple, chocolate and strawberry syrups, whipped cream, nuts, and cherries, I encourage him to go check out some old Life magazines while I quickly steal a few bites. It’s delicious, of course. Hunt tells us that it’s not uncommon for customers, drawn by the old-fashioned presentation, to drive from the Dallas-Fort Worth Metroplex to enjoy a Nostalgia banana split.

Two hours have flown by and I can’t help but feel that we’ve left several sections of the store (and menu) unexplored. Still, I find comfort knowing that not only have we not broken anything, we’ve found another favorite getaway spot.