With the help of new owners, the beloved restaurant and bar bounces back following a tragedy

Written by Peter Obering | From the February 2019 issue | Updated: February 7, 2019 | Filed Under: DiningPeople 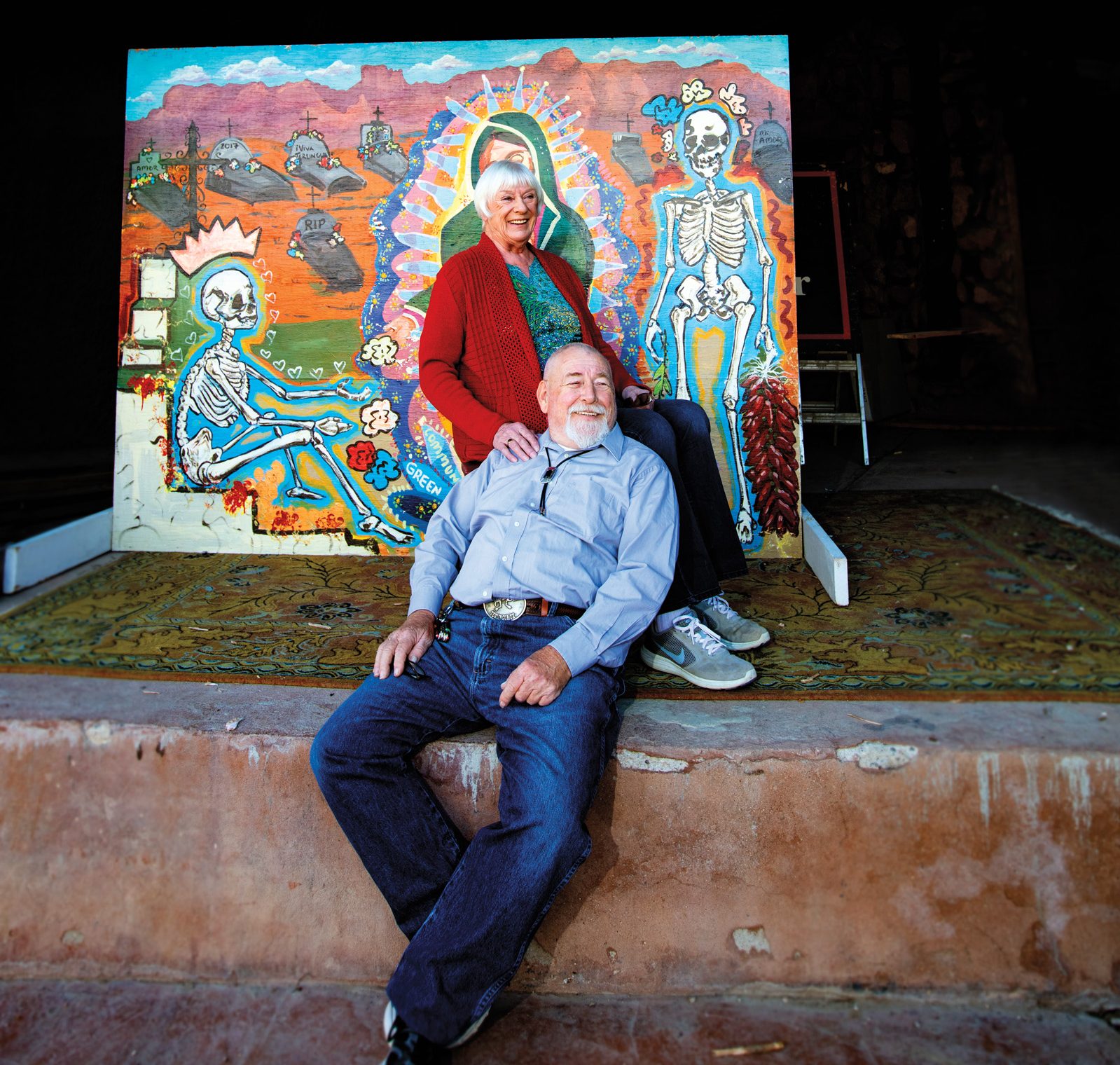 Josie and John Holroyd, the owners of La Kiva bar and restaurant in Terlingua, renovated the beloved space after a sudden and tragic closure. Photo: E. Dan Klepper

On the banks of Terlingua Creek, a ramp leads down into La Kiva, one of the most famous bar/restaurants in the Big Bend area. In Hopi culture, a kiva is an underground chamber used for religious and political meetings. But this kiva is a meeting place for the dreamers, lost souls, river guides, and tourists who are drawn to the old mining town and surrounding desert.

La Kiva feels almost subterranean with its soft lighting, stone walls, and wood beams. The kitchen turns out excellent food at reasonable prices—burgers, pizzas, steaks, and barbecue. Wednesday is open mic night, Thursday night features a guitarist, and on Friday and Saturday nights rock ’n’ roll acts take the stage. But in an area of the world this remote and sparsely populated, what really keeps people coming back is the sense of belonging.

On any given night, the most unusual people in La Kiva are owners Josie and John Holroyd. A proper British couple, the Holroyds began coming to Big Bend (“snow birding,” John says) in 1981 and fell in love with the Chihuahuan Desert and the Chisos Mountains. Josie, 78, is tall and stately with white hair. John is a bit younger and less rectilinear. At 74, he’s a dignified man with a white goatee. A biotech engineer by trade, he came to the United States in 1980 to work with dialysis and ultrasound machines. Over his career, he traveled to 59 countries, teaching doctors to use ultrasounds. The Holroyds first came to Big Bend to get away from a snowstorm in Oklahoma City, and then winters in Wisconsin and Minnesota, where they still own a house on a golf course and where their children and grandchildren live. After a day of hiking, they would stop at La Kiva for dinner.

The couple bought La Kiva four years ago after Glenn Felts, the former owner, was killed during an after-hours fight with a customer. The gruesome story made national headlines.

“The situation here was delicate,” John notes. “We had to tread lightly.”

The bar had been closed for six months. The roof was on the verge of collapse; walls had to be rebuilt; a new sewage system was needed—and the community needed to grieve the loss. The couple didn’t want to change La Kiva. They wanted to restore it, make it happy and cheerful again. “The place is riddled with unbelievable stories,” Josie remarks.

The Holroyds are in the stage of life when buying a condo in Florida makes more sense than taking on the challenges and stresses of running a bar and restaurant. John was recovering from open-heart surgery when they bought La Kiva. “It’s a community center hugely important to many people,” Josie says of their decision. 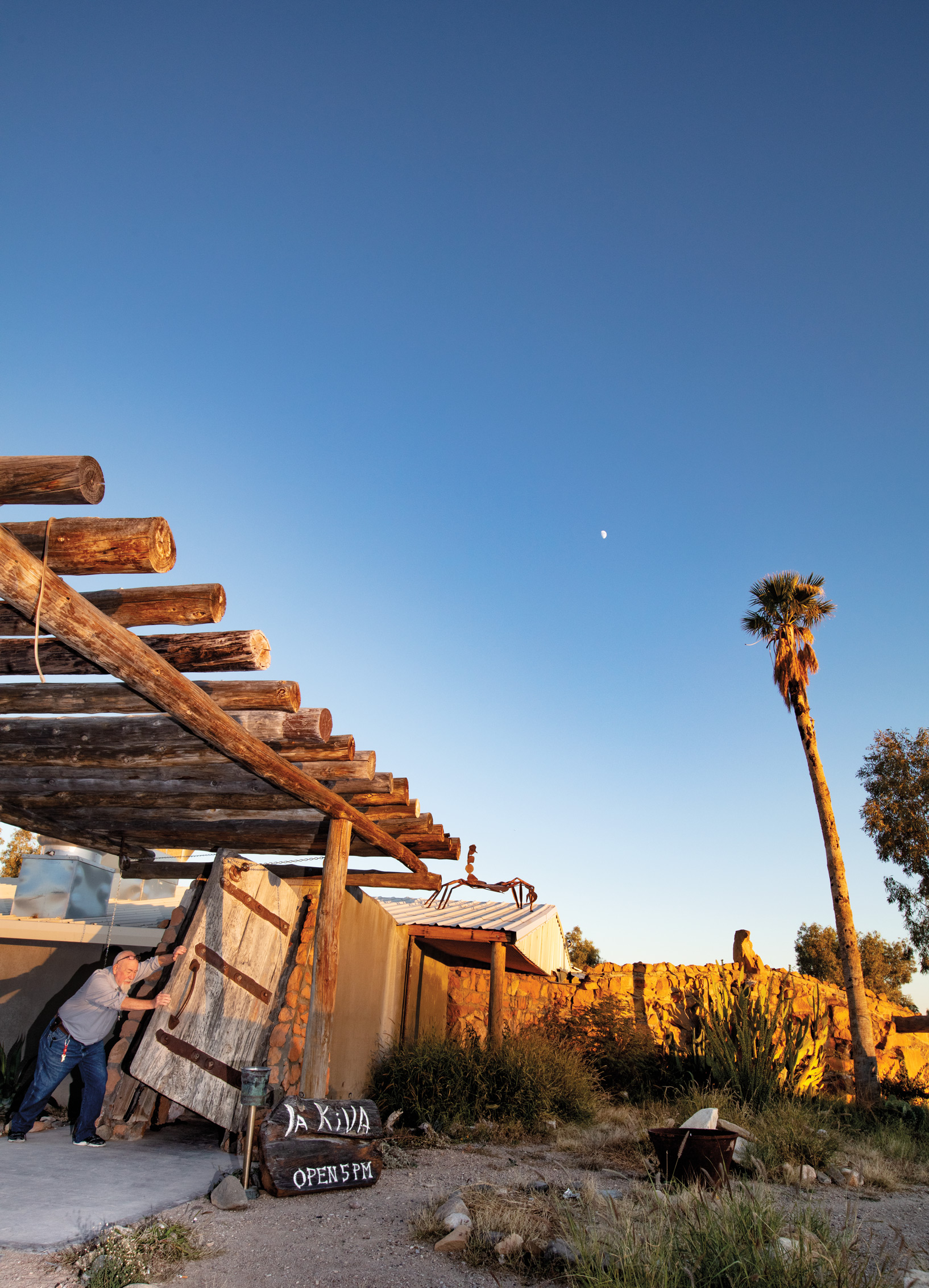 As they show me around the restaurant during a visit in November, they tell me about Gil Felts, the man who built La Kiva. He came to Terlingua in the late ’70s when people began moving into the ruins left by the quicksilver mine that closed during World War II. Looking at a stone wall Gil constructed, John says of the handiwork, “all eyeballs. No rulers.” Nearby are tables that Gil made from giant redwood trees he had trucked in from the Russian River Valley in Northern California. An Army vet and a social science teacher, Gil intended La Kiva to be a gay bar, according to the Holroyds, building an underground steam room, showers, and a hot tub on the patio.

For a moment, the Holroyds hesitate then understand what I’m getting at. “Oh, yes,” John replies. “With 58 people on the census, if there’s one lesbian couple and Gil, that would make three.”

La Kiva never took off as a gay bar, but eventually became the biggest party in Terlingua. Gil was a charismatic entertainer who wore a parrot on his shoulder. When he died of AIDS in California in 1989, La Kiva went to his nephew Glenn, an engineer in Dallas who’d studied at MIT. Regular customers were skeptical of the new owner, but Glenn let his hair grow and began promoting La Kiva as a live music venue. A slight man with curly hair and a big smile, Glenn’s untimely death five years ago traumatized the community. “One woman tried to come back four times,” John recalls of a distraught patron. “The fifth time she managed to come in from the parking lot, crying on a friend’s shoulder.”

The couple didn’t want to change La Kiva. They wanted to restore it, make it happy and cheerful again.

More improvements and upgrades are in the kitchen, which they have expanded and upgraded with pizza ovens and a smoker for barbecued brisket, chicken, and pork ribs. Their staff fluctuates between 12 and 35 as the high season runs from November through March. They don’t have trouble finding workers, but affordable housing is a problem because a lot of homeowners rent their properties on Airbnb. To compensate, the Holroyds let their employees camp on the 35-acre property behind the club in RVs and tents. John and Josie live on the lot, too—in a 45-foot-long motor home. “You can’t underestimate being kind to people,” Josie says. “If you give someone a place to start, to put up a tent, that means a lot. They can save money and improve their situation. And they’re loyal.” One of the employees calls Josie “Mom.”

Two days later when I stop by again, John and Josie are sitting on the patio where John is telling two friends how he jumped on top of a customer who was attacking one of his staff—a rare bar fight. “I put him in a choke hold.” He puts his arms around Josie’s neck to demonstrate. “And I put him to sleep.”

“He carries,” Josie says, referring to her husband’s pistol, raising her eyebrows.

After dark, John and I hop into his red Jeep and drive along the creek where the headlights pick out campsites. It isn’t unusual for people around Terlingua to live in their cars or trucks. We see small RVs and two-wheel trailers. He slows the Jeep as we pass a big sturdy tent that has gone up. Some of the campers have outlined their areas with rocks, making paths and firepits.

When we get back to La Kiva, we sit in the Jeep and talk for an hour or so, not about anything in particular, but it’s the kind of conversation you have in the desert at night—lingering, quiet, listening. I keep wondering why they would sacrifice so much to restore La Kiva and help the community heal.

When we get out of the Jeep, we look up at the black sky, at the bright stars and the white swirling mist of the Milky Way. This is a harsh and beautiful place—a kind of place that draws people like the Holroyds to act in ways that are both foolish and noble. This is a challenge; a new adventure.