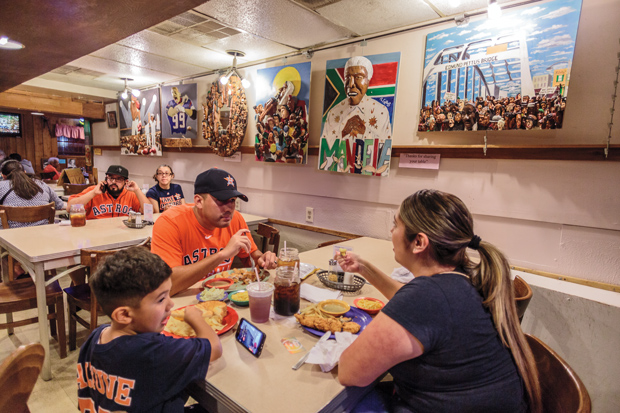 Hickory Hollow’s Heights location features local art on the walls and live bluegrass, country, and folk music on the weekends.

In Texas’ booming restaurant scene, new eateries seem to spring up overnight, and sometimes they fall by the wayside just as quickly. But one of my local favorites, Hickory Hollow in Houston, has managed to endure over the years, not by keeping up with the times but by offering the one thing that never seems to go out of style: old-fashioned comfort food.

Its original location was established in 1977 on Fallbrook Drive in northwest Houston, and the “new” location in the Heights opened more than 30 years ago. Whereas the Fallbrook restaurant resembles an old farmhouse and is situated on more than an acre, Hickory Hollow in the Heights occupies a nondescript red-brick building on the corner of a busy intersection on Heights Boulevard. But don’t let the exterior fool you—the inside offers a rustic retreat filled with the smells, tastes, and even sounds of classic country cooking.

The moment I step into Hickory Hollow in the Heights, I’m transported by the enticing aroma of pecan-smoked meats wafting from the kitchen. A sign on the wall near the service counter advertises a menu of spicy sausage, sliced or chopped beef, smoked turkey, barbecued chicken, and pork ribs, among other entrées, plus an array of home-style side dishes. These include Southern green beans, crispy fried okra, creamy coleslaw, seasoned pinto beans, chunky potato salad, and spuds served fried, mashed, or baked whole and stuffed with all the fixings. But above all, the restaurant is known for its chicken-fried steak, which comes in three sizes: small, medium, and ridiculous. The biggest, called the “Rancher,” fills a 14-inch pizza pan and weighs about 1 1/2 pounds. The outsized dimensions of the Rancher have attracted the attention of national media outlets, leading to the restaurant’s appearance on the Food Network’s Outrageous Food series in 2011, and more recently on the Travel Channel in an episode of Man v. Food.

The Hickory Hollow on Fallbrook Drive shares the same gut-busting menu and the unpretentious “country cozy” décor, with old farm tools hanging from the walls. However, I like the Heights location because it offers music to match the ambiance. Every Friday and Saturday night, bands performing bluegrass, country, Western Swing, or folk music take over the small stage in the back room and entertain diners during their meals. And every Wednesday night, professional and amateur musicians alike flock to the venue for a weekly bluegrass jam. The first time I happened to come to the restaurant on a jam night, I felt as if I had accidentally wandered onto the sound stage for the TV show Hee Haw. A ring of musicians were picking banjos, mandolins, and guitars at a breakneck pace, accompanied by a fiddler and a thumping bassist, and in between songs everyone stopped to joke around and swap stories. 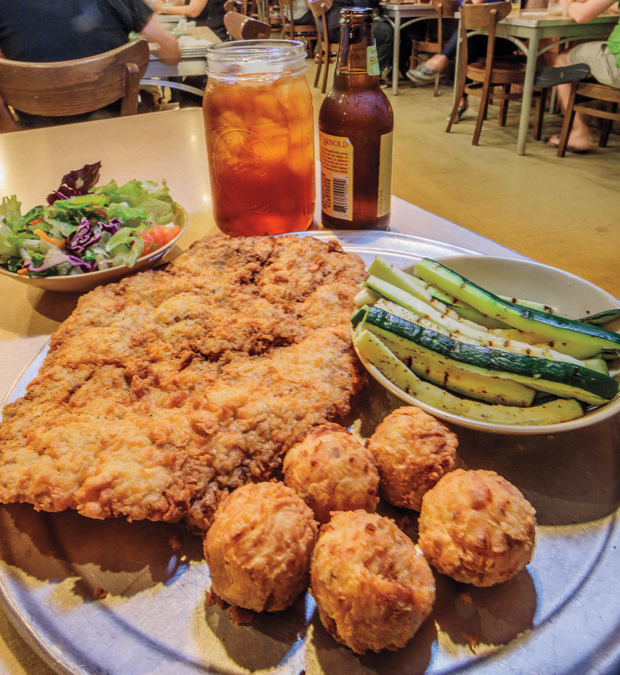 Comfort food has never gone out of fashion at Hickory Hollow in Houston, whose “new” location in the Heights dates back more than 30 years.

Tony Riedel, who purchased Hickory Hollow from the original owners in 1979, says the music was added as an afterthought. He had launched the Heights location in 1987 in an attempt to expand the business. But back then, the Heights was still a relatively industrial area, and Riedel says it was sometimes a challenge to fill tables in the evenings. In the early ’90s, he decided live music might draw a different crowd. Since he could play guitar, he formed an impromptu band with one of his employees to get the ball rolling. The idea caught on, and before long he was approached by some bluegrass musicians who were willing to play for meals.

Today the restaurant enjoys a loyal customer base of people who like the combination of down-home cooking with down-home music. Riedel says, “We’re known as one of the only acoustic venues in this area that has no cover and no minimum.” In addition, the popularity of the bluegrass jam has led to a bimonthly ukulele jam, which takes place every first and fourth Thursday.

Today the restaurant enjoys a loyal customer base of people who like the combination of down-home cooking with down-home music.

Nevertheless, the food continues to be the main attraction. I like to enjoy my comfort food sans discomfort, so I skip the Rancher challenge and instead settle on the three-meat combination platter ($14.79), picking and choosing as I please. Inevitably, one of my choices is the tender chicken-fried steak, which even at the smallest “Plowman” size lives up to its fame. The breaded beef cutlet is topped with the restaurant’s signature “Texas River Bottom” gravy, made from a peppery chicken-stock roux. Other top contenders include the juicy smoked turkey and the sliced brisket, both of which are particularly delicious when doused in tangy barbecue sauce and eaten with a slice of white bread and onions and pickles. The delicate scent of pecan wood permeates the meat, which is cooked on-site in a giant smoker. From the side options, I invariably go for the “hot tots”—deep-fried puffs of potatoes mashed with bacon, cheddar cheese, sour cream, and diced jalapeños—and then wash them down with sweet iced tea. On the rare occasions when I leave room for dessert, I find it hard to resist the gooey pecan pie, although the lay-er cakes and locally made fruit pies tempt me, too.

Over the years, as the Heights has evolved into a happening part of town, full of hip bars and trendy restaurants, Hickory Hollow has managed to stay relevant with its throwback menu of traditional Southern fare.

“Fortunately, what we do is timeless in Texas. Blue collar, white collar—we appeal to the full spectrum,” Riedel says. He attributes the restaurant’s longevity to one thing: consistency. “We’re really consistent in our food and in the level of service. We have low turnover, and we don’t change a lot. We maybe add some-thing to the menu every three or four years,” he says.

In a world full of flux, there’s something comforting about that. Houston has countless up-and-coming restaurants to explore, but I return to Hickory Hollow when I’m craving the familiar flavors of country cooking. It’s like a homecoming for my tastebuds.