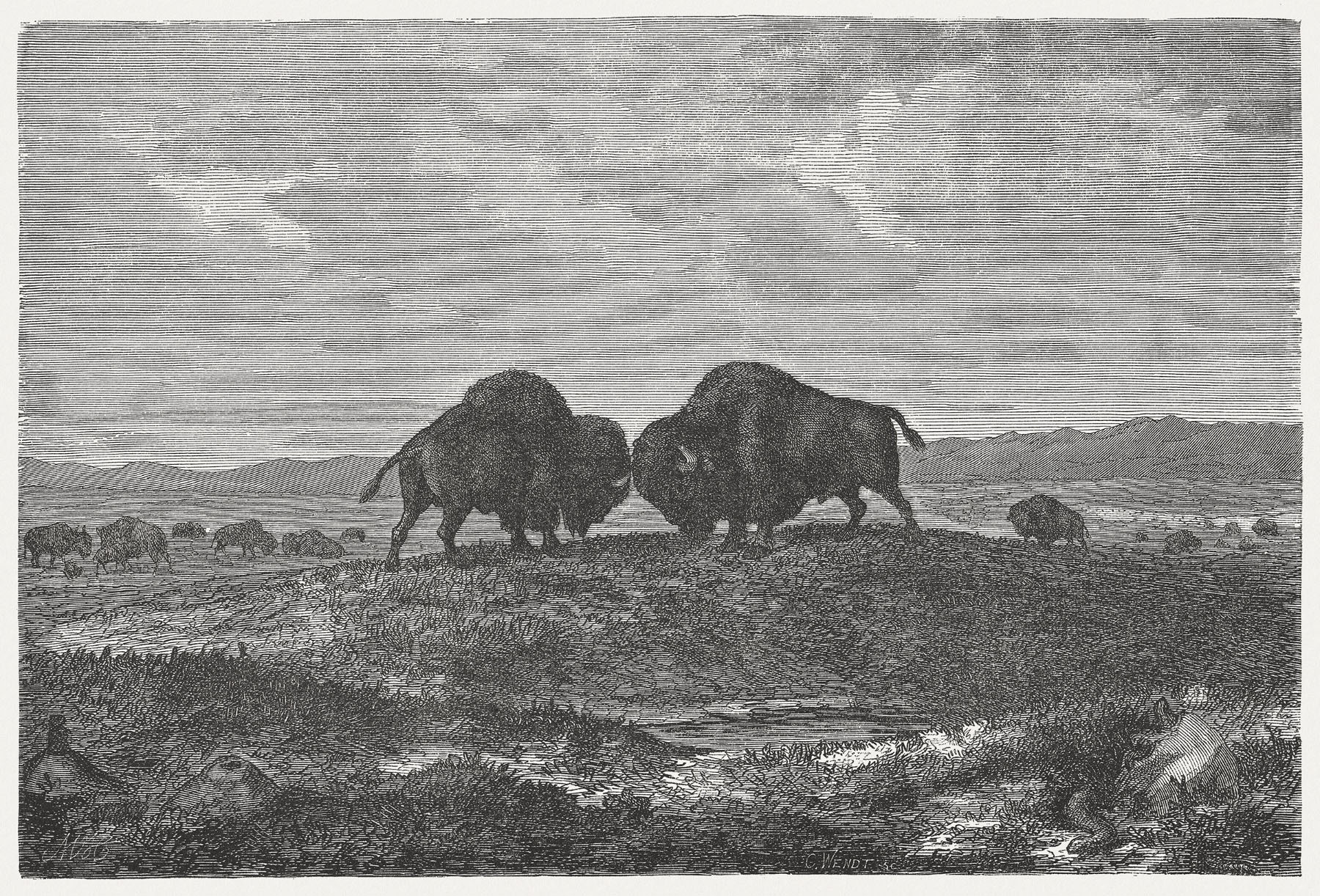 People have lived in the area we now call Texas for at least 13,000 years and have resourcefully transformed the landscape’s plants and animals into food in all seasons. Early inhabitants hunted mammoth, horses, camels, and the Bison antiquus—a much larger forerunner of today’s animal—until the herds were supplanted by modern bison around 7,500 years ago. Indigenous people also hunted pronghorn, deer, rabbits, turkeys, and quail. They harvested persimmons, mustang grapes, and pecans; and ground acorns and mesquite pods into flour. They ate catfish, turtles, freshwater mussels, and crawfish, as well as large land snails. By about 1100, several peoples, including the Antelope Creek in the Panhandle, the Caddo in East Texas, and the Jornada Mogollon near El Paso, had made forays into agriculture. They planted crops that included, at different times, corn, beans, and squash.

Many of Texas’ first foods are no longer part of mainstream diets, but others steadfastly remain on the menu. Venison, catfish, and pecans are still staples of Texas cuisine after thousands of years. Today’s diners can imbibe prickly pear margaritas and slather their toast with agarita jelly made from the same plants people harvested millennia ago. Still other traditional ingredients are prepared by descendants of Texas’ Indigenous people, who maintain a connection to their ancestors and the land through the foods on their tables. 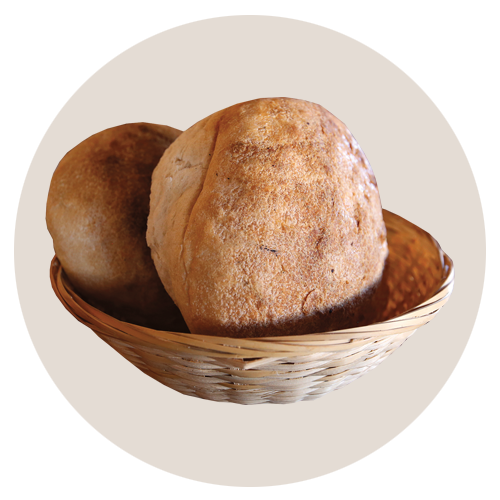 The Tigua people of the Ysleta del Sur Pueblo have been baking their traditional crusty bread in hand-built, outdoor adobe ovens for more than 300 years. Visitors to the tribe’s cultural center in El Paso are invited to watch bakers mix the ingredients by hand, without a recipe or measuring cups, and carefully place the loaves in the mesquite-fired ovens. Baking demonstrations start at 8 a.m. on second and fourth Saturdays each month. While the bread bakes, visitors can explore a museum exhibit, watch dance performances, and visit tribal shops. By 11 a.m., the fresh bread is ready for purchase. ysletadelsurpueblo.or

Cooking time for tubers in an earth oven 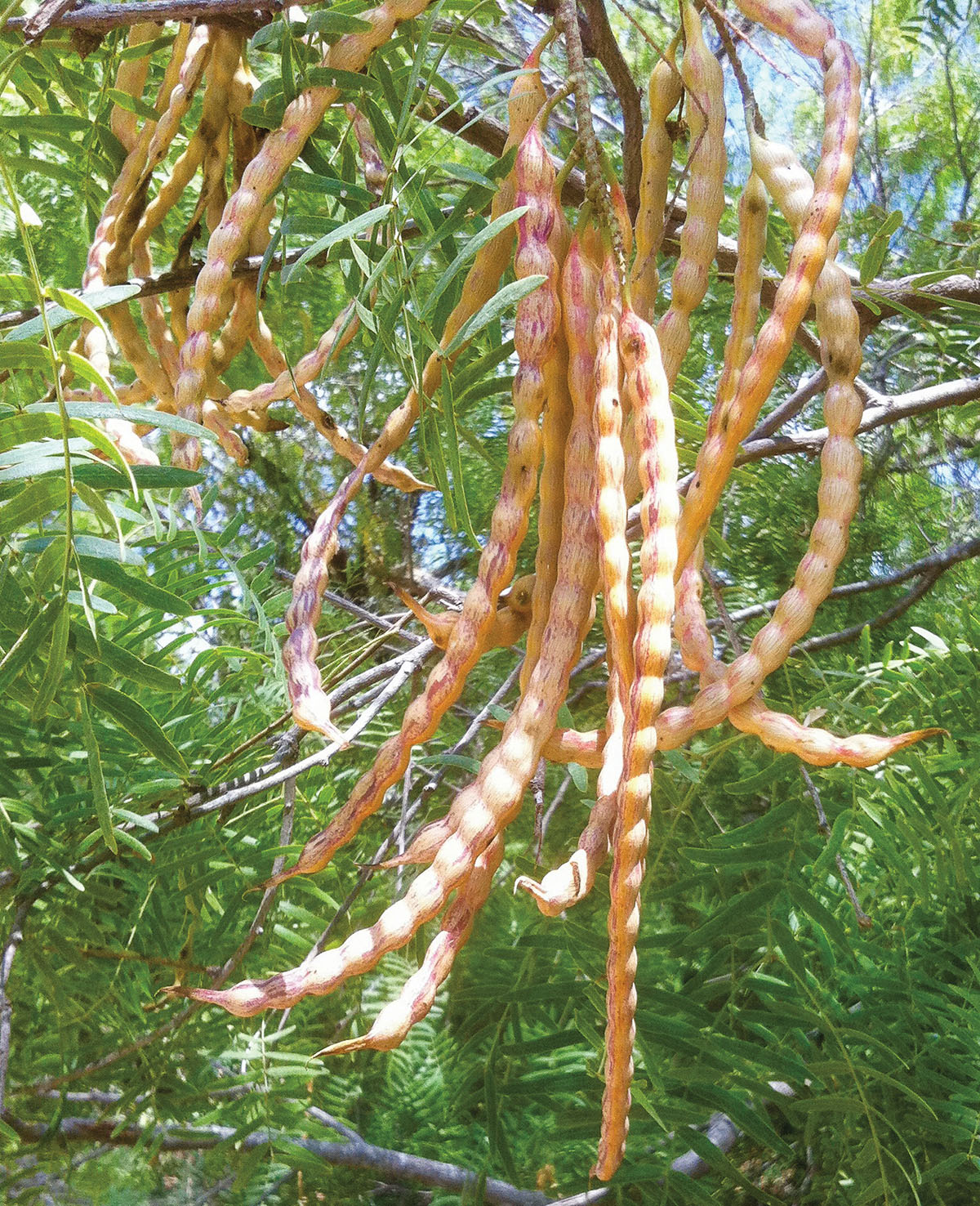 From Mesquite to Wheat

Indigenous people in many parts of Texas—including the San Antonio area—relied heavily on the mesquite tree. When the tribes collectively known as the Coahuiltecans moved into Spanish missions in the early 18th century, they continued eating traditional foods, including mesquite. “Mesquite is considered our arbol de vida, our tree of life, because so much of our ancestral survival depended on this one tree,” says Manuel Davila, the cultural arts program manager for the American Indians in Texas at the Spanish Colonial Missions. In the spring, young, green mesquite pods could be fermented into a molasses-­like sweetener. The summer heat dried the pods into brittle beans, which the Coahuiltecans ground into a woody, sweet flour they baked into cakes or mixed with turkey eggs to batter yucca blossoms. The cultivation of wheat, the Spaniards’ preferred grain, marked the end of the mission Coahuiltecans’ reliance on mesquite.

In the Lower Pecos region, coprolites—ancient feces—preserved in dry caves reveal what the inhabitants ate 1,500 to 9,000 years ago: snakes, lizards, prickly pear pads, persimmons, walnuts, amaranth. “We see it as a desert, but to them it was a veritable garden,” says Harry Shafer, curator of archaeology at the Witte Museum in San Antonio. In the museum’s Peoples of the Pecos gallery, visitors can see life-size dioramas of early inhabitants building an earth oven, working in a hunting camp, and living in a rock shelter. The Witte partners with the Rock Art Foundation to offer reservation-only tours of Lower Pecos sites including the Bonfire Shelter, where early hunters killed hundreds of bison by driving them over a cliff. wittemuseum.org/rock-art-tour-calendar

At Alibates Flint Quarries National Monument in the Panhandle, carbon dating of partially burned corn stalks and squash and bean seeds indicates approximately when the Antelope Creek people became farmers. Today’s visitors can see a “living exhibit” of the gardens they planted. nps.gov/alfl

Excavations at the Lubbock Lake Landmark have uncovered bison, pronghorn, and deer bones bearing marks that suggest the animals were butchered and processed. The site welcomes guests to programs and exhibits at its interpretive center and trails and, in summer, the excavation area. depts.ttu.edu/museumttu/lll 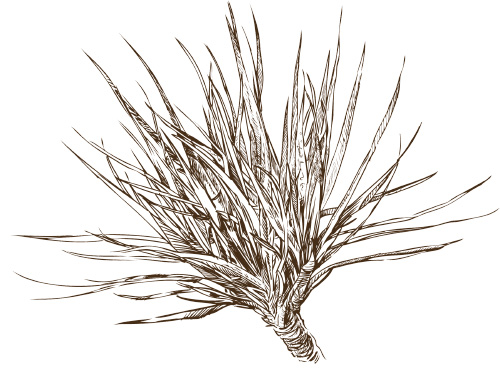 The earliest Texas ovens were built at least 8,000 years ago, and the remains of these ingenious appliances dot the landscape from central to west Texas. To build an earth oven, people would dig a pit, build a fire, and cover the coals with rocks that retained the heat. They would top those rocks with a layer of insulation, such as damp leaves; place the food atop those leaves; and cover the food with more insulation and dirt. Over 12 hours to three days, the hot rocks would slow-cook the food: sotol and camas bulbs, lechuguilla, yucca, wild onions, and occasionally meat from deer or small game. Today, some South Texas pitmasters continue the tradition, cooking barbacoa in hand-dug ovens.

“Food does not have nationality; food has roots,” Medrano says in an interview. “If you think about food in landscape terms instead of geopolitical terms, it makes more sense because food comes from nature.” For instance, nopales—cactus paddles—were gathered by Native people for thousands of years before Spanish colonizers arrived in the land now called Mexico and Texas.

Medrano’s recipe for Ensalada de Nopalitos combines the herbal, slightly acidic flavor of cactus paddles with tomatoes and onions—also indigenous to Texas—and chiles. A sprinkle of queso fresco is not a native food because it’s made from cow’s milk, but it adds a complementary creaminess.

Bison were a staple food – and a source of clothing, tools and shelter – for many Indigenous peoples for thousands of years. In the late 1870s, professional hide hunters slaughtered millions of bison in a deliberate attack on Native survival. Bison descended from a small remaining herd now roam Caprock Canyons State Park. Visitors can spot them on a drive or hike, or attend the seasonal “Bison Supercenter” presentation, which explains how Plains people including the Apache and Comanche obtained all their “groceries” from the animal. tpwd.texas.gov/state-parks/caprock-canyons/bison

Method
1.  Hold the cactus paddles with tongs and remove the spines using a sharp paring knife or a potato peeler. Wash well and cut the cactus pads into ½”x 1” strips.
2.  In a saucepan, cover the cactus strips with water and bring to a boil.  Cook for 10 minutes until the cactus is tender but still firm.  Drain, and let the cactus to cool to room temperature.  (Some Mexican American home cooks tell  me that the water makes a nutritious drink that lowers blood pressure).
3.  In a bowl, combine all the ingredients, except the avocado, and mix well.
4. Arrange the avocado slices around the edges of the salad and sprinkle them with a little salt.

Serve at room temperature or chilled.