It Started with Chips 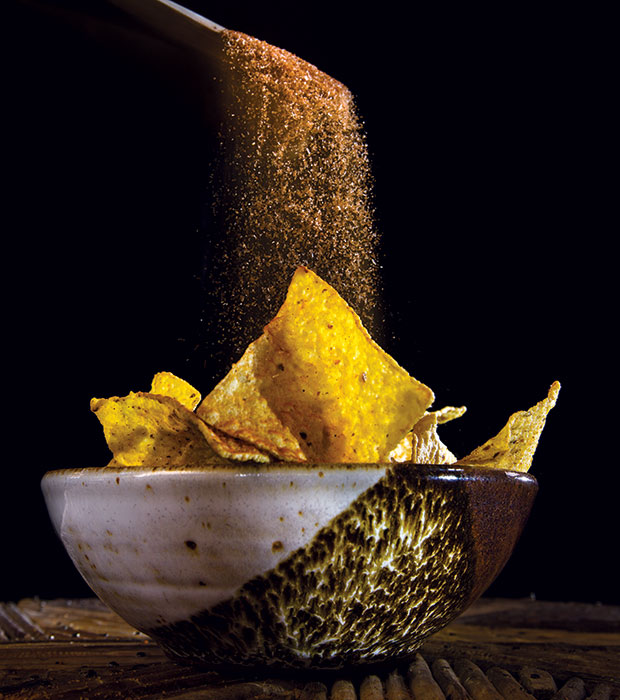 The smell of corn chips permeated the Garcia household in the formative days of the family corn-chip business. “I would go to school and the kids would tell me, ‘Man, you smell good,” recalls Miguel Garcia, who woke up early to fry corn chips in the family kitchen to help make enough for his father, Julio, to sell at a convenience store and for his mother, Lilia, to deliver for catering jobs.

The Garcias didn’t choose the corn chip business as much as it chose them. With 10 children to feed, Julio and Lilia relied on their kitchen skills to make chips and salsa to supplement their income, starting in the 1980s. Customers came knocking on the door of the Garcias’ home in residential Del Rio; sales were transacted at the kitchen counter. By 2002, the chips had grown so popular that Miguel opened a factory with a Mexican restaurant in front. Nowadays, the restaurant is a bustling hub of Del Rio, and you can find Julio’s chips and salsa at big grocery stores across Texas.

“Without them, this would never have happened,” Miguel says, referring to his parents’ hardscrabble hustle. “They made all the sacrifice for us. Everything we do now with the creating and the cooking, it comes from way back. It’s hereditary—in the blood, I guess.”

Julio Garcia, now 83 and retired from the business, was born in Crystal City and raised in Acuña, Mexico, the city across the Rio Grande from Del Rio. When he was about 15, he ventured north to find work.

Julio eventually landed in a restaurant kitchen, learned to cook, and made a career in the food industry. His biggest gig was as chef at Del Rio’s Branding Iron Steakhouse in the 1970s. Cooking in an open kitchen where he could interact with customers, Julio would pound on pots and pans to the rhythm of an old-timey piano in the steakhouse, belting out Spanish classics like “El Rancho Grande.” People ate it up. It was also during this time that Julio developed a simple seasoning mix of salt, black pepper, garlic, paprika, and cumin. The same blend flavors Julio’s seasoned chips today, and plays a part in many dishes at Julio’s restaurant.

But the restaurant business is fickle, and over time, Julio found himself out of work and in debt. He took a job working the graveyard shift at a convenience store, where he noticed that the late-night crowd, returning from the bars in Acuña, loved the store’s nachos, the processed ballpark kind with plastic-like cheese. Having learned to make tortilla chips at restaurants, Julio thought the customers might prefer fresh, seasoned chips. He was right. Demand grew, and within a few years, the family modified their detached garage, bought a fryer, and opened a storefront selling chips and salsa to go.

Miguel Garcia, now 47, still opens the tiny, canary-yellow shop next door to his boyhood home, but most of the action is at Julio’s restaurant, a colorful eatery on US 90 set in a yellow metal-sided building with red trim. The walls of the 1,500-square-foot restaurant reflect the culture of the town. There are framed photos of volleyball and football players from Del Rio High School, tributes to Our Lady of Guadalupe, pictures of Laughlin Air Force Base servicemen chomping Julio’s chips in the Middle East, and autographed promo shots of Tejano music stars. Families, mechanics, prison guards, businessmen, and airmen fill the tables, the drive-through, and the to-go line.

Miguel draws the crowds with a menu featuring Tex-Mex standards like tacos ($1.99 for a fat taco in a 12-inch flour tortilla), carne guisada and enchilada plates ($6.99), and brisket and steak plates ($9.99).

Having learned to make tortilla chips at restaurants, Julio thought the customers might prefer fresh, seasoned chips. He was right.

The Huevos Rancheros plate ($4.99) features two eggs over-easy on a bed of Julio’s chips and topped with a spicy jalapeño-tomato sauce. The barbacoa on the side—cooked soft but with crisp edges—reflects the salty spice of Julio’s seasoning mix, which is offset nicely by the garnish of cilantro and onion. The helping of carne guisada, cooked in Julio’s salsa with added garlic, carries a compelling, earthy tomato essence.

Del Rio residents Orlando and Letty Polanco have been Julio’s customers since the garage store opened in 1985. They stopped at the restaurant recently to pick up some chips and an order of Tacos Tapatios to deliver to their son in San Antonio. “The Tacos Tapatios are tasty, they’re crispy, they’re fresh,” Orlando says. “I could eat a dozen and I don’t feel over full.”

Miguel says the Tacos Tapatios are a variation of the dish that he would eat during visits to Acuña as a child. The tacos are brisket wrapped tightly in corn tortillas, which are deep fried and then garnished with seasoned sour cream, shredded cabbage flavored with lemon and jalapeño juices, and tomato slices. Orlando’s right—they’re delicious and refreshingly light for Mexican food.

Behind the restaurant, Julio’s 5,000-square-foot production facility is churning out chips and salsa as fast as it can. “We start production at 5 a.m. Monday and keep going through 3 a.m. Saturday,” Miguel says. “On Sunday, we clean and grease the machines.”

And so it grows. Miguel improvises as necessary, as the business has done from its inception. He’s eyeing more space, bigger and better machinery, more efficiency. “The demand right now, it’s a little hard to keep up with, but we’re able to get it done,” Miguel says. “Now we need a more modern building, and that’s going to be my next step. I hope I can do it before I’m 80.”