Leave it to Bevers 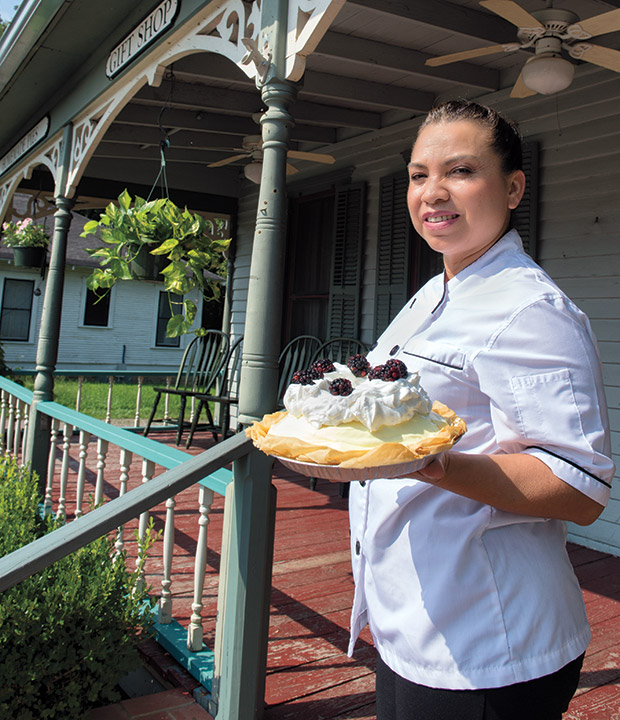 Alejandra Ray started working at Bevers Kitchen in 1987 as a cook, and she eventually became the restaurant’s “pie lady” and owner.

When in need of sustenance on my frequent travels around Texas, I seek out local places—establishments where I know the food will be fresh and I can count on a few locals hanging around to make me feel welcome. For example: Bevers Kitchen in Chappell Hill.

Get more comfort food recommendations from our readers.

On a recent Saturday night, I arrive to meet my friend Debbie Jenkins, who lives a few miles away and had first turned me on to this local favorite. For the Saturday dinner special, the restaurant offers three types of enchiladas—beef-and-cheese, verde (chicken in tomatillo sauce), and chicken-and-spinach. I choose the latter, two corn tortillas stuffed with tender pieces of chicken topped by a creamy cheese sauce with flavorful bits of spinach.

Debbie’s grilled chicken salad comes in a large bowl, and it’s a generous mix of fresh greens, morsels of chicken, and Gouda cheese. Our waiter leaves her a bottle of house-made raspberry vinaigrette dressing. While we nibble and catch up, the restaurant’s two dining rooms fill up and a line forms on the covered porch, its worn boards creaking beneath people’s feet.

The restaurant’s namesake, Ann Bevers, bought this 1907 Victorian-style cottage in 1984, shortly after she and her husband Ken moved to the area from Midland to be closer to their parents. Ann originally opened a real estate office in the building, but with business slow, she decided to use one room to sell sandwiches, soup, and ice cream. When delighted locals asked for more than this limited menu, she began cooking plate lunches.

The first few years, it looked like the café might not succeed. But Ann kept cooking, eating many of those plate lunches herself, while Ken worked in Houston to pay the bills.

Meanwhile, current owner Alejandra Ray arrived to Texas from the tiny state of Colima, Mexico. In 1987, she made her way to Chappell Hill and found a job at the café. When the restaurant’s pastry chef walked out one day in 1989, Ann recalls, she turned to Alejandra and said, “You’re my new pie lady.”

Alejandra protested at first. “Pies were something I didn’t want to do,” she says. “I don’t like to do things I don’t know how to do. But she said to keep trying; that I was going to be good at it.”

By 2001, Ann’s real-estate business had taken off, and she decided to sell the restaurant to Alejandra. “I loved working at Bevers so much, I had decided I wanted to have my own restaurant,” Alejandra says.

Diners with dessert on their minds face an abundance of pie options ranging from coconut meringue to apple-pecan-praline. In a tall, circular case near the front door, whole pies tempt with layers of fluffy meringue towering higher than a beehive hairdo. More line a bakery case across the back of the dining area. Alejandra adds new flavors on a regular basis—the latest a white-chocolate strawberry—with some 30 or 40 choices in all. During the holidays, the restaurant sells 400 pies a week; in a slow week, about 200 go out the door. Each and every one comes from a small kitchen in the back, made with the help of Alejandra’s daughter, Olga Keese. Ann Bevers remembers that when Olga first started helping make pies, she was so little that she had to stand on a stool to reach the countertop. 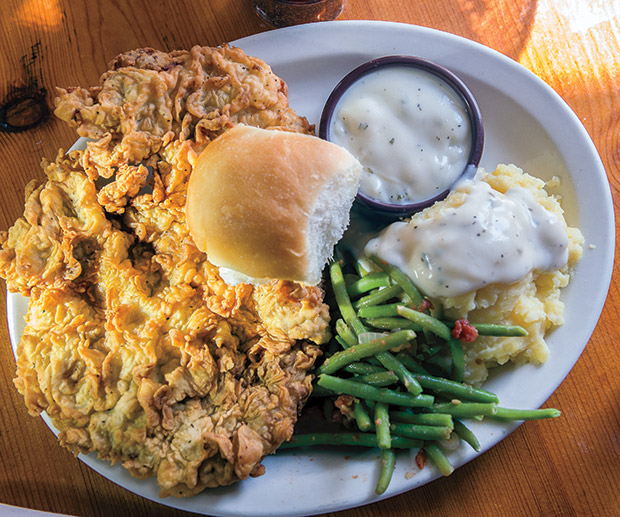 In addition to enchiladas and pies, folks come here for Friday’s dinner specials, fresh-baked bread, and other favorites, including pinto beans seasoned with jalapeño, cilantro, and onion. “People love my pinto bean recipe,” Alejandra says. “The key is finding a pinto bean that cooks well, because not all of them do.”

Growing up on Mexico’s central Pacific coast, Alejandra and her family raised most of the food they ate. Poor in the traditional sense, she says she felt rich when it came to food. “Everything was fresh. My father was a fisherman, and we ate fresh fish almost every day. When I came here, I added more fresh things to the menu. I always try to find the best ingredients, too. I use real vanilla and real butter and mostly fresh vegetables.”

And the secret to her savory, bright enchilada sauce just might be fresh garlic and real butter, which adds a piquant kick and a silky mouthfeel. Debbie and I leave nary a bite on our plates, but we still order pieces of French silk and apple pie. Some versions of French silk pie are topped with a mere dollop of whipped cream, but this one has a creamy snowbank of it over a deep layer of chocolate. The apple pie wins us over with thick, cinnamon-tinged slices of fruit nestled in a flaky, buttery crust.

Alejandra hopes to expand her always-crowded kitchen, but plans to keep the restaurant itself small. “That way I can be in touch with everything,” she says. “I’m grateful for the faithfulness of my customers, and I really enjoy cooking for them.”