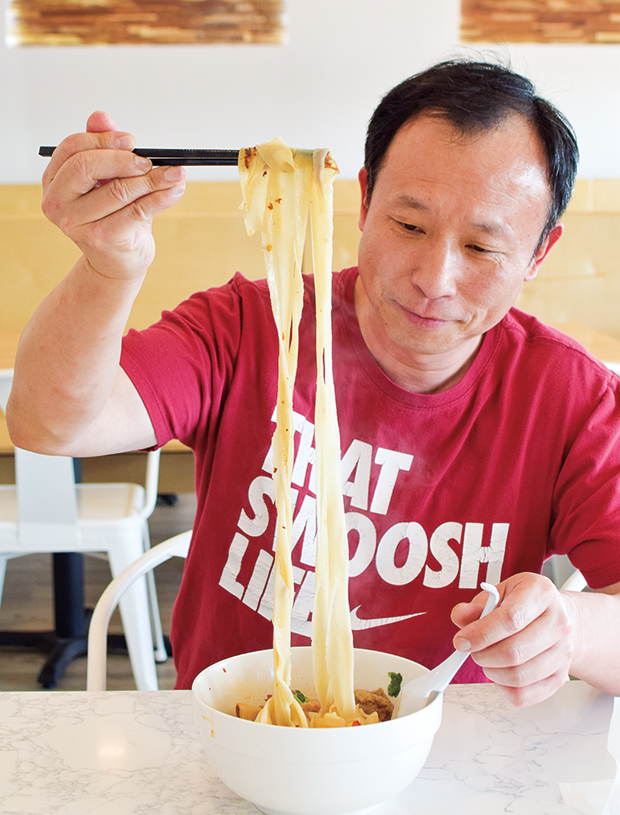 Forget most things you’ve learned about table manners, and embrace the slurp in Houston’s Chinatown.

On a sleepy Thursday afternoon just after the lunch rush, Let’s Noodle, a hand-pulled noodle shop in Houston’s Chinatown area, is quiet except for the slurping noises coming from the restaurant’s communal table. A man sits there hunched over a bowl of noodles, his concentration fully focused on the food in front of him.

He takes a sip of broth with a soup spoon, then uses his chopsticks to pull the noodles high and long—at least a foot up into the air from the rim of his bowl. When the long strands reach a point near the top of his head, he stops lifting them, and then proceeds to tuck them in his mouth, noisily slurping the entire length of the noodle. He then repeats the process—sip, pull, tuck, slurp —until his bowl is empty.

In Houston, hand-pulled noodle joints began sprouting up in 2015. Prior to that, people hankering for this Chinese specialty in the states would have had to visit places like New York City, San Francisco, or Los Angeles. The trend has since spread to other Texas cities, but Houston has the most options, including Let’s Noodle, Kuen Noodle House, Strings Noodle, and most recently, Niu Yi Zui Laman (the first outpost of a chain from mainland China), which opened last month.

Let’s Noodle, which debuted last fall, stands out among the rest because it’s the first to serve a type of wheat noodle from the Henan province called hui mian. (Most restaurants serve noodles called la mian, which come from the Lanzhou province.) Hui mian noodles are about 3/4-inch wide, like Italian pappardelle, but are thicker and denser than their European relatives, with good elasticity and chew. The texture of the noodle is important because its traditional preparation is in the form of a noodle soup; the noodle has to be able to stand up to the broth without getting soggy. I’m happy to report that the Let’s Noodle versions succeed with flying colors.

The restaurant itself has a fresh Scandinavian feel, with white walls, pale wood tabletops and built-in booths, white metal chairs, and a white marble-topped community table situated just in front of the entrance. Diners order at the counter, then find a seat for the short wait.

Designed by Cori Xiong of Mala Sichuan Bistro, who owns and operates Let’s Noodle with her husband, Heng Chen, and their partner Zhiguo Cui, the restaurant has another major draw: a viewing window into the kitchen. The window frames the kitchen, where customers can get a direct view of the cooks doing the highly enter-taining noodle-pulling.

The process is mesmerizing: Taking a piece of pre-proportioned dough, the cook pulls it horizontally, stretching it into a wide band spanning the length of his arms before tossing it up and down rapidly to form an arc that gets wider, longer, and thinner with each toss. In just 20 seconds, this yields two long continuous strands of hand-pulled noodle. It’s amazing to see, like a magic trick where your eyes never quite catch what’s happening.

There are six hand-pulled noodle dishes on the menu, but the most famous is a lamb noodle soup ($9). “We make our broth from scratch; we don’t use a powder base,” Chen says.

The broth is milky and hearty, with an earthy lamb essence. Wood-ear mushrooms, sweet potato vermicelli, shredded tofu, and sesame oil give each spoonful added flavor. The other five noodle dishes (two noodle soups, one chilled noodle, and one stir-fry noodle) also cost roughly $8-$10 and can serve as excellent one-bowl meals any time of day.

Xiong sources the lamb from local Halal butchers, explaining that lamb is popular in Henan cuisine because the largest ethnic group in that region doesn’t eat pork. She admits, however, that she overestimated how many customers would order lamb, so the menu features other options, too.

There’s also a chalkboard hanging behind her cash register, written in Chinese and English, that explains daily specials. “We run specials to figure out what people like, and sometimes we add them to the regular menu,” she says.

Customers love the flatbread sandwich filled with shredded pork and cilantro, which Xiong calls a Chinese Porkburger ($3). It’s a savory hand-held snack that can be ordered as an appetizer or as an on-the-run light lunch. The flatbread is crispy and toasted, and the meat is braised in Chinese spices to a consistency sim-ilar to that of a sloppy joe.

Spicy-food enthusiasts will love the Mala Big Plate Chicken or Rabbit. Braised in a blend of spices hat include cumin and Sichuan peppercorns—the latter imparting a tongue-tingling, lip-numbing steady heat—both varieties are served on a round platter with two portions of noodles, to be shared family-style.

In fact, more than half of the menu is meant to be eaten family-style. Stir-fried vegetarian dishes like the wonderfully textured Chinese-eggplant-and-green-bean dish (see recipe above) demonstrate how simple ingredients and good technique can combine to create something special. I’m also fond of a comforting stew made with braised pork belly and boiled eggs.

Still, the biggest “pull” at Let’s Noodle are the noodles. The best time to experience them is during lunchtime on the weekends. That’s when the restaurant is busiest, and also when you’ll see the noodles in action—not just in the kitchen, but also in the dining room as happy customers fall into rhythm: Sip, pull, tuck, slurp.