5 Must-Try Restaurants in Port A 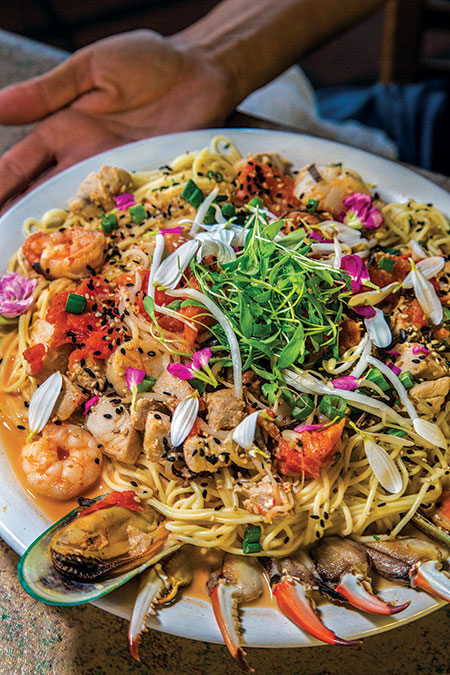 My annual summer vacations to Port Aransas consist of two things: beach-bumming and restaurant-hopping, and I’m not sure which I look forward to more.

With sunscreen-sticky skin and sea salt-infused hair, we can breeze into our favorite eateries wearing flip-flops and sit down to a fabulous meal. As the island’s dining options continue to multiply, dishes span well beyond fried seafood platters paired with umbrella-adorned cocktails. Diners can find authentic taqueria-style tortas, barbecue, fresh baked goods, and even Northern Italian fare. My restaurant must-visit list grows with every trip, but Shell’s, a nine-table eatery loved by locals as well as in-the-know tourists for its seriously good food, remains a front runner.

“Tuna tacos,” my friend Ashley says to our waiter once we’re seated inside the tiny eatery, which lies a few blocks from the beach.

“Same,” her sister Lindsey adds, without looking at the menu.

I follow suit, because the popular blackboard special—coriander-and-chili-crusted Ahi tuna that’s seared, sliced to expose a rare center, then enveloped in corn tortillas and served with avocados, black beans, and a tangy cucumber-jicama slaw—always sells out quickly. We make sure to arrive right before Shell’s opens for lunch, as this entrée isn’t on the dinner menu. I think it’s the accompanying salsa, made with fresh orange juice, thyme, garlic, and chipotle peppers, that makes the tacos so addicting. 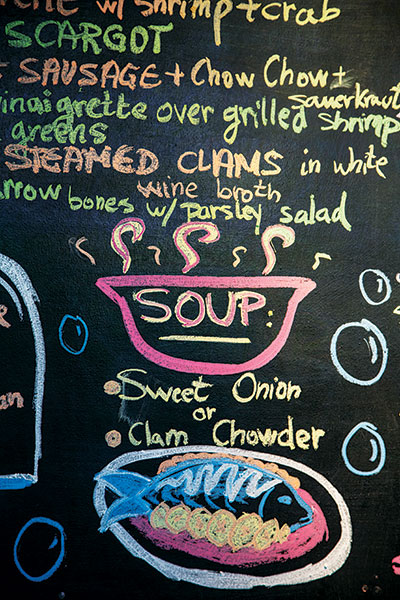 “I’ve always liked the ocean,” says Heber Stone Sr., who left a well-established culinary career in Austin to pursue life at a more leisurely pace in Port Aransas. He and his wife, Karen, opened Shell’s in 1996. The longtime chef, who had also worked in restaurants in Hawaii, California, and on the west coast of Canada, was raised in Brenham and says trips to the coast were frequent when he was a child.

“When we moved to Port Aransas, I wanted to do something small,” he says. “Karen does the pastries and bakes all the bread, and my son Heber Jr. is a chef, too. He’s been in the kitchen with me since he was 12 years old, and now he and his wife, Robin, take care of the business at night.”

The restaurant’s platter of roasted olives, doused in olive oil and coated in fresh herbs, is served with grilled, house-made foccacia. We often order it as our table’s shareable appetizer. Sometimes a member of our group will stray from the tacos and order a bowl of mixed seafood tossed with buttery Alfredo sauce served over linguini, or the blue crab cake sandwich, which features a flaky patty of local blue crab meat formed with a light touch of breadcrumbs. It’s served open-faced, atop more of that thick foccacia, then drizzled with a Key lime aioli. Karen’s desserts change often, but the tart Key lime pie remains the most popular, Stone says.

While I do love fishing, it falls second to lazy lounging on the beach. Not so for my husband Josh, who hits the surf to cast for sea trout and redfish while we watch from the shore. When he reels them in, that means we’re likely headed to Castaways Seafood and Grill for dinner.

Open since 1986, Castaways is one of the island’s most popular tourist destinations, so we usually visit on the late side—around 8:30—to avoid the crowds. With his filleted fish ice-packed in a cooler, Josh hands over his catch to our waiter for preparation upon seating. When you don’t live in or near a beach town, this process is very cool, as it’s rewarding for the fisherman and for those with whom he’s sharing his bounty, and seafood doesn’t get much fresher.

“There is something magical about catching your own dinner,” says Castaways owner Jay Jones, who bought the restaurant in 2005. “We’ve seen it all—from piggy perch to great big sharks.”

Castaways will fry, grill, or blacken your fish (bring it in cleaned and ready) and serve it family-style with sides like fried okra and cole slaw along with hot bread and crispy hushpuppies. But if the fish aren’t biting, Castaways’ menu runs the gamut of beach-town fare, including crab-stuffed flounder, grilled mahi mahi, and fried shrimp po’ boys. We usually make a point to order coconut shrimp, whose light batter contains just enough coconut flakes to complement the sweetness of the shrimp.

At the Crazy Cajun, eating with your hands is encouraged.

When we’re up for making a hot mess, we visit The Crazy Cajun, Port Aransas’ go-to spot for boiled shrimp, crab legs, sausage, and crawfish in season. We usually order a family-style sampler called The Hungry Cajun, which includes a spicy assortment of seafood, sausage, crawfish, new potatoes, and corn-on-the-cob, which servers dump onto tables covered with white butcher paper in traditional shrimp boil fashion. Eating with your hands is encouraged, and the loaves of sourdough bread, which come with whipped butter upon arrival, are worth elbowing over. With its eclectic décor and informal atmosphere, this touristy restaurant is just plain fun, especially when we get to use small wooden mallets to pound those tricky crab legs.

“We have people who came when they were six or seven years old, and now they bring their kids,” says Phyllis Capps Layne, who opened the Crazy Cajun in 1987. “Eating here is an experience you remember, because it’s different.”

When my parents accompany us, they’ll often order a bowl of crawfish Creole to share. Spicy crawfish tails stewed in a rich tomato sauce made with chopped celery, onions, and bell pepper generates a piquant aroma that turns the heads of the rest of our party. It’s a flavorful dish we promise to order for ourselves next time.

When the island is in full summer swing and the streets have gone golf-cart crazy, most restaurants will have a substantial wait time during standard dining times. But Avery’s Kitchen, opened three years ago by longtime islander Avery Hernandez, sits off the island’s main drag and off the radar of tourists—so far. The exterior resembles a trailer home, and the interior is similarly minimalistic, with walls free of neon beer signs or beach-themed décor. Avery’s doesn’t even have a liquor license, so if you want beer, wine, or something stronger, you’ve got to bring your own. Despite the lack of traditional restaurant trappings, Avery’s Kitchen is fast building a reputation for quality beach cuisine with a home-cooking flair.

On my lunchtime visit, I ordered the fried oyster po’ boy with seasoned fries, and I was glad I did. The plump oysters were lightly battered and juicy, especially delicious after a liberal squeeze of lemon to add acidity. The accompanying side dish of crispy, seasoned fries proved the perfect foil. We’re eager to return for breakfast.

On our most recent Port A trip, we finally made reservations to experience the lively scene at the Venetian Hot Plate, where gregarious owner Linda Halioua can often be heard offering wine recommendations with boisterous enthusiasm. Originally from Venice, Linda brings authentic Northern Italian gourmet dishes to the Texas coast, but that wasn’t her original intention when she and her late husband, Maurice, opened the restaurant almost 20 years ago. 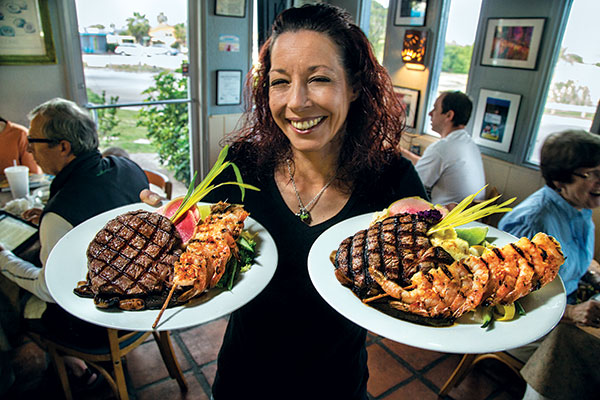 “We thought we would open a restaurant in Florida,” says Linda, who considered Port Aransas at the persuasion of her father-in-law. “But we fell in love with the funkiness of the island immediately.”

But bringing true Italian cuisine and more than 85 wine selections, at least half of which are Italian varietals, to Port Aransas hasn’t been without its challenges. “We’re thou-sands of miles from Italy, so it’s sometimes hard to find certain ingredients,” she says. “But it pays to be stubborn and tell our vendors, ‘No, you have to bring in this specific brand.’”

Filet medallions topped with creamy gorgonzola sauce “go like hotcakes,” Linda says, adding that regulars have learned that if they want a slice of the Hot Plate’s lasagna, layered with rich Bolognese meat sauce, velvety béchamel, and Italian cheeses, they should reserve it in advance, by phone, as it almost always sells out.

I’ll make sure we do that next time. But right now, the wine is flowing and we can’t get enough of the misto mare, a hot skillet of sautéed Gulf shrimp, diver scallops, blue lip mussels, and clams in a garlicky white wine sauce that we’re sharing as an appetizer. This dinner will commemorate the end of another food-centric trip to Port Aransas for us, and once again, another must-visit restaurant has been added to the list.