A treasure trove of heirloom recipes 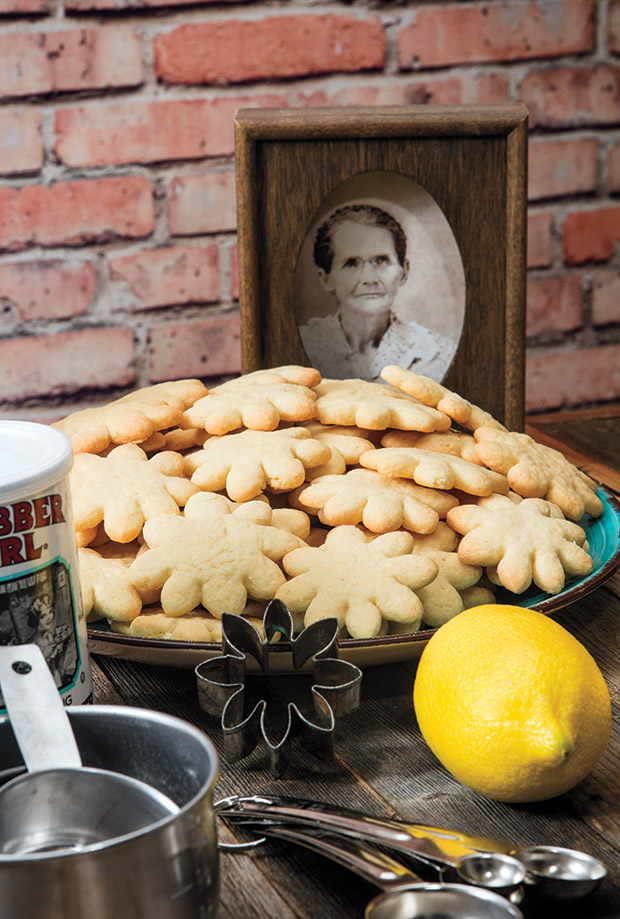 Not too sweet and sometimes flavored with lemon zest, tea cakes may be the ultimate heirloom treat.

In her new cookbook From Tea Cakes to Tamales: Third-Generation Texas Recipes, journalist and former Texas Highways editor Nola McKey returns to her roots as she explores how recipes, cooking, and food bring families and communities together.

See www.texashighways.com for tips on preserving your own family recipes.

(Adapted from the book From Tea Cakes to Tamales: Third-Generation Texan Recipes by Nola McKey)

1. Cream butter and sugar together in a large bowl. Add eggs and beat well. Stir in vanilla and lemon zest.

2. Blend flour and remaining ingredients together and add to butter mixture; mix well. Place dough on
a floured board and roll out to 1/4-inch thickness;
cut into 2-inch rounds or use a cookie cutter to make special shapes. Place cookies on a lightly greased baking sheet and bake at 375˚ for 10-12 minutes, or until edges are golden brown. Remove to wire racks to cool. Makes about 3 dozen cookies.

From Tea cakes to Tamales

“About 20 years ago, my son Clay came home one evening and told me that he needed a traditional family dish to take to school the next day,” says Nola. “I hadn’t thought about my Grandma McKey’s tea cakes in decades, but they were the first things that came to mind.”

A tea cake—a simple sugar cookie sometimes embellished by lemon zest or other flavorings—was a common treat baked in households across the United States in years past. “Grandma kept them in a ceramic container next to the spoon jar, and one of the things I always associated with going to Grandma’s house was that I could have tea cakes,” recalls Nola.

“I had written down some of her recipes when I was in college, but I hadn’t touched them since then,” she continues. “But as I made my grandmother’s tea cakes that night, and the kitchen filled with the familiar smells, the memories came back. Taking them out of the oven brought even more memories. When we tasted them—thick, pillowy, with a hint of lemon—it was almost like a visit from Grandma.”

The power of scent to recall memory has been well-documented anecdotally and in literature. French novelist Marcel Proust famously described the phenomenon in his novel Remembrance of Things Past (also known as In Search of Lost Time), in which a character describes a similar olfactory memory-jog in response to the delicate butter cakes known as madeleines. Science bears this out, too: Aromas, it turns out, are first processed by the olfactory bulb, which starts inside the nose and runs along the bottom of the brain, with direct connections to the amygdala and the hippocampus, areas of the brain that have strong associations with emotion and memory.

“After that first experience with the tea cakes,” Nola says, “I started reflecting on the power of family recipes to connect us with people who had passed on, and I also started wondering how many people cook with heirloom recipes. So when I retired a few years ago, I started working on the cookbook.”

As contributors sent her family recipes—scalloped potatoes, egg noodles, gingerbread, watermelon-rind pickles, wild mustang grape jam, and dozens more—they also trusted her with their colorful family stories, and Nola took on the unexpected role of family historian. “One woman shared a recipe for her grandmother’s laborious chicken-and-dumplings,” Nola says. “After she rolls out the dumplings on the kitchen counter, she drapes them over the backs of chairs to dry, and the process reminds her of being a child at home with her mom and grandmother.”

With help from UT-San Antonio’s Institute of Texan Cultures, Nola eventually found contributors from more than a dozen of the many ethnic groups that inform Texas’ rich cul-ture. Recipes from Germany, Poland, Italy, and other countries complement traditionally Southern recipes like red velvet cake and cane syrup pie.

One of the book’s most compelling tales relates the story of the spirited Marie Sophie Victoire Lebel Commins Stewart (1842-1915), a young Belgian girl who was sent to a convent because her parents deemed her too tall—at more than six feet—to marry. She learned to cook at the convent, but eventually escaped with an equally rebellious friend and made her way by ship to America, where she married and ran a spa called the Fairfield Inn in Mineral Wells. Marie Sophie’s recipe for French plum pudding, submitted by her great-great granddaughter Anne Shannon Lewis Isham, appears in the “Desserts” section, which Nola says proved more difficult to whittle than others, as contributors shared more heirloom dessert recipes than any other category.

The book also includes tips on how to preserve your own family recipes, a chapter on festivals and museums where readers can learn more about Texas’ culinary history, and a trove of black-and-white family photos that speak volumes about the state’s multicultural influences.

Another entertaining theme emerges if you pay attention to contributors’ names: Such affectionate nicknames as “Big Mama,” “NanNan,” “Momie,” “Gran,” “Maw-Maw” and “Nannie” seem as universal as the tea cakes that started Nola’s journey.

“At some point, in fact,” says Nola, “I had to start turning away tea cake recipes. It turns out they are the quintessential Texas heirloom recipe.” Slightly sweet and infinitely adaptable with additions ranging from anise to lemon zest, these time-tested nibbles hit all the pleasure centers with their sweet, buttery simplicity.

Try baking some yourself; you may create a new family tradition of your own.