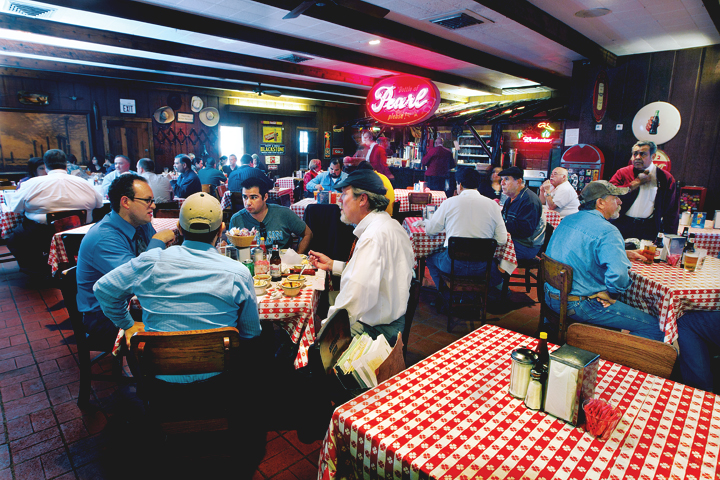 At 3 p.m. on a Wednesday, I find the parking lot at Joe Cotten’s Barbecue in Robstown (founded in 1947 and home of arguably the best barbecue in South Texas) crowded with pickup trucks. I smile at the nearly lifesize plastic cow and pig perched on the edge of the roof, clomp across the wooden porch, and enter next to the placard proclaiming: “No credit cards, no checks, no separate checks.”

I take a seat at a table covered in a red-and-white tablecloth, and soon my waiter, Robert Elizaldi, arrives, spiffily attired in the Joe Cotten’s uniform: black pants, white shirt, maroon coat, and a black bow tie.

“Stringy beef,” I say, and in my mind I can already taste the tender brisket, so succulent that it pulls apart in strings. “And potato salad.”

There are no menus here. If you haven’t eaten here before, your waiter will give you the rundown: brisket—lean or “stringy”—sliced pork shoulder, pork ribs, and sausage. (They won’t mention it, but if you call several hours in advance, they’ll smoke you a chicken.) You can order one, two, or three meats, and whatever you mention first, you’ll get the most of.

Today, my husband, John, accompanies me. We note the usual crowd: locals in gimme caps, tourists in sneakers, and the occasional border patrol officer and sheriff’s deputy.

Elizaldi drops a sheet of butcher paper in front of me. On it rests a pile of glistening brisket with a quarter-inch pink smoke ring and a ribbon of fat as big as a string bean. A hefty slice of pork shoulder sits beside it. The meat arrives with a cup of unadorned pinto beans, two pieces of bread (one white, one wheat), dill pickles, a jalapeño, and a slice each of tomato and sweet onion.

Elizaldi, who has been with the restaurant since 1975, tells us that some diners have mistaken the barbecue sauce—a chunky, tomatoey mixture with a tiny bit of onion and jalapeño mixed with brisket drippings—for salsa or soup. It’s nothing like the sweet or vinegary barbecue sauces elsewhere.

The late Joe Cotten founded his place in 1947 on Robstown’s Avenue A (FM 665) as a beer joint and gambling hall, adding barbecue to keep his customers from getting hungry.

“Back then, gambling was a misdemeanor,” says Joe’s son Cecil Cotten, who runs the place now. When gambling became a federal offense, Joe turned his attention to smoking barbecue with locally plentiful mesquite. Cecil says Joe tinkered with the recipes, adding “It took him eight years to get the sauce the way he wanted it.”

In 1969, Joe built the current, decidedly unfancy wooden building on the edge of US 77, the main highway to the Rio Grande Valley. Its three rooms can, and often do, seat 360 people. When Joe died and Cecil took over, he was smart enough to leave everything exactly as it was.

Only once in recent history have customers at Joe Cotten’s been distracted from the meat—when Dallas Cowboys quarterback Tony Romo dropped in on his way to a hunting trip in 2008. Diners summoned friends and relatives by cell phone, Cecil says, and soon a traffic jam formed on US 77 as folks filled the parking lot.

“The police weren’t directing traffic,” Cecil says. “They were inside getting autographs.” I’m guessing they didn’t leave without a little stringy beef.