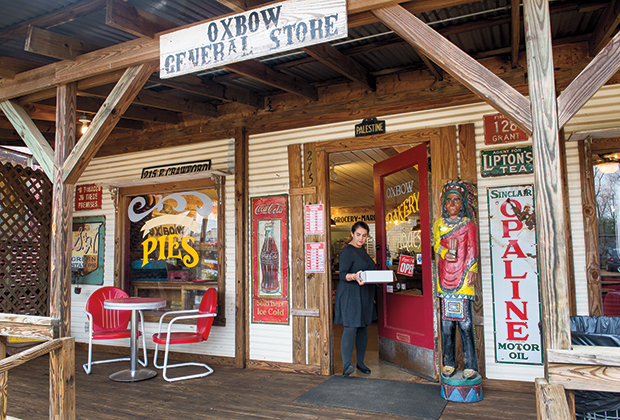 More than a dozen varieties of pie await at Oxbow Bakery in Palestine.

There is a sweet spot in East Texas where mile-high meringue and heritage are folded into the ultimate dessert experience. Nestled along the banks of Caddo Creek in Old Town Palestine, Oxbow Bakery is a slice of old-timey heaven and a portal to nostalgic memories. 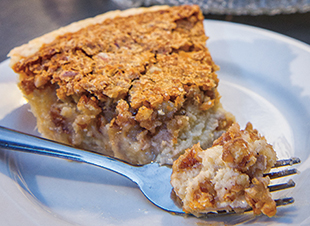 For the crust, use your favorite recipe or a good commercial piecrust.

Melt butter and place in a large bowl. Add sugar, flour, salt, and nutmeg. Beat with a mixer, then add eggs, vanilla, and buttermilk, scraping sides and bottom of the bowl. Sprinkle chopped pecans on the crust, then pour the mixture over the pecans. Bake at 350 degrees for 10 minutes, then reduce heat to 300 degrees. Bake until filling sets, about an hour.

Becky and David Wolfe, a mother-son pie-making duo, quickly earned a following after opening Oxbow—originally a simple antiques store—in 2009. The building, once a mule barn, seemed perfect for showcasing collectibles from the past. “We wouldn’t do this anywhere else,” David says. “It’s a jewel down here in Old Town.”

Stepping inside the Wolfes’ shop, I notice subway tiles sparkling from the kitchen area, bordered by antique pie cases and seed bins. Vintage signs hang on the walls, and an impressive buffalo mount guards the retail shelves, which are stocked with edible gifts, including duck-fat caramels, bread and cookie mixes, and bags of local coffee.

Soon after opening the antiques store, Becky realized the business needed “a little something extra” to increase traffic, so she decided to bake pies. She started with a handwritten chocolate meringue recipe she found tucked away in her mother’s notebook and then began tweaking family recipes until she got them just right. “I started with one chocolate meringue and one coconut pie,” she recalls.

“Every few months we added more flavors until we had about 15 pies,” says David, who makes piecrust several times a day. Over the last year, David also has learned how to make the fillings “just like mama made them.” These days, the antique Oxbow pie cases offer at least a dozen delectable flavors at any given time.

My first flavor was meant to be strawberry. Late one afternoon a few years ago, I ventured into the bakery in search of the much-talked-about strawberry pie. David smiled, told me he was out, and suggested I come earlier next time. Disappointed at first, I snagged the last slice of banana blueberry pie, and tasting it, I had an epiphany. Pie was no longer just for the holidays.

I returned the following week, earlier this time—but not early enough. In lieu of strawberry, I settled for pineapple meringue. As I slid my fork through the towering meringue and pineapple filling to the flaky crust, the trifecta of textures and tropical flavor made me grin from ear to ear. A few weeks later, arriving before noon, I finally got to try Oxbow’s strawberry pie; the combination of sweet berries, a delicate crust, and whipped cream tasted like springtime on a plate. Since then, I’ve learned the best way to eat Oxbow pie is with friends, so you can sample multiple flavors at once. (I’ve also learned if you show up to any gathering with an Oxbow pie, you will leave with new friends.)

While the Wolfes have perfected the art of pie making, small business ownership has provided other challenges. During the Wolfes’ sixth year of pie baking, disaster struck. After historic flooding in spring 2016, the Wolfes arrived to their shop in Old Town to find almost a total loss. Most of the Old Town businesses were damaged, but Oxbow was inundated to within feet of the ceiling. “We lost almost everything,” David says.

As the Wolfe family transformed the old mule barn once again, customers waited with bated breath for the Oxbow pie drought to end. After cleanup and repairs, David and his wife, Breezy, began to execute their vision for the business’ new look.

On October 23, 2016, Oxbow reopened. The bakery, now complete with a commercial oven and modern kitchen features, allows the Wolfes to bake 50 to 60 pies daily, practically doubling pie production. An open kitchen allows patrons to see how the pretty pies are made. The wooden tables and benches have been replaced with vintage diner booths and retro tables and chairs. Even the front porch got a makeover: Vintage metal lawn chairs encourage guests to linger and get to know each other.

Today, Oxbow has risen from the sludge and looks better than ever; more importantly, the pies taste as delicious as they always have. The pie cases beckon with more than a dozen delectable flavors, ranging from pecan praline cream to coconut meringue. Other favorites include the popular strawberry pie (when in season), banana blueberry, and traditional flavors such as chocolate meringue and buttermilk. You can try them all, slice-by-slice, in Old Town Palestine.