The unusual combination works wonders for this Belton joint 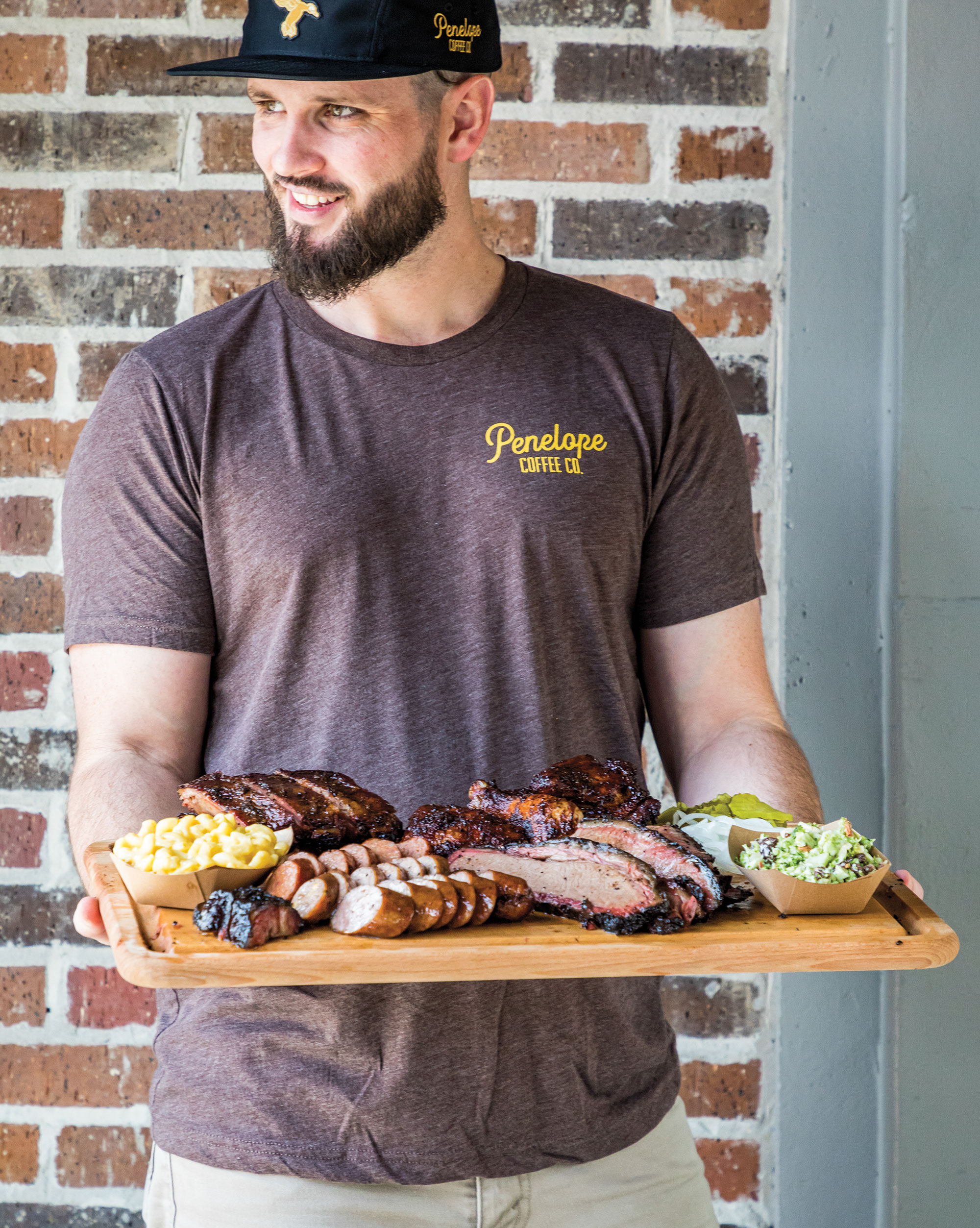 Brisket is an easy sell in small-town Texas, but try adding a $5 latte to that three-meat combo plate, and you’ll likely never hear the end of it from the locals. At Miller’s Smokehouse in Belton, though, no one complains much.

Located just a few blocks from Interstate 35 and catty-corner to the town’s one-screen movie theater, the barbecue restaurant opened in 2008 when Dusty Miller convinced his father, Dirk Miller, to let him use gear and real estate from his deer processing and taxidermy business in the off-season. Dusty, then a sophomore studying accounting at the University of Mary Hardin-Baylor, used his sausage-making equipment to prepare sausage wraps and borrowed a smoker to cook pulled pork and brisket, making for a sparse menu. After graduating, Dusty juggled his job as a CPA in Austin while expanding his offerings, until he built a loyal local following. Soon enough, the rest of the Millers joined in—six family members now help operate the booming restaurant.

“It was all trial and error,” Dusty says. “We don’t take any shortcuts—[we] buy high-quality meat, smoke it, that’s it.” Dusty and his team run five 1,000-gallon smokers around the clock. The father-son pair is involved in every aspect of the restaurant, from front-of-house duties to quality control.

Dusty chose a good time to open a business in Belton. Of the 13 restaurants now operating downtown, none existed when he graduated high school in 2007. The town grew 21 percent between 2010 and ’19, according to the Belton Economic Development Corporation.
“We have a perfect storm where it’s not that expensive to buy real estate, build a business, and live, but we have access to more customers than you’d normally find in a rural town of about 20,000, so it’s an interesting market,” Dusty says. 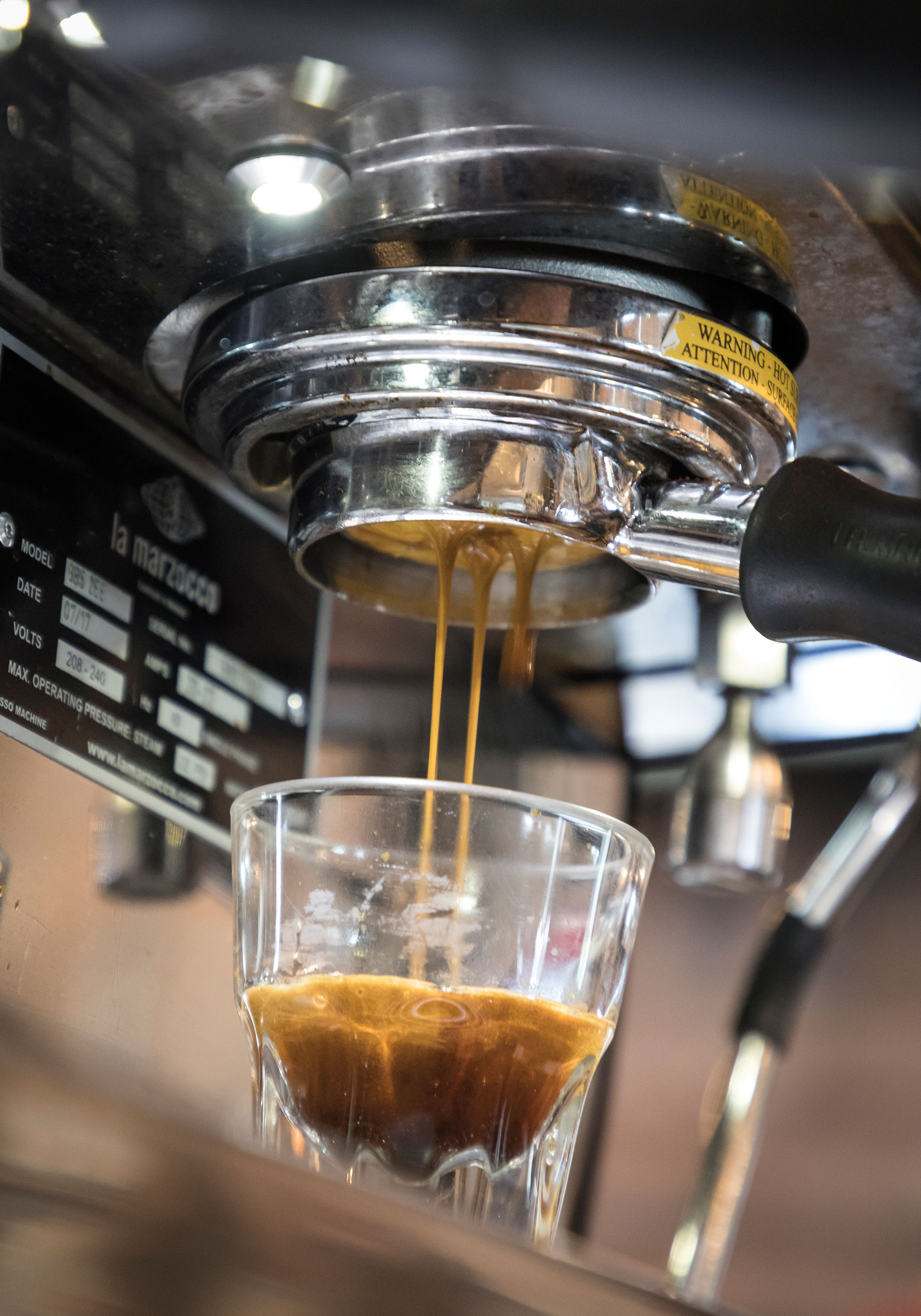 Order a cortado for a pick-me-up. Photo: Eric W. Pohl

Dusty spent three years commuting from Austin to Belton—about an hourlong drive—to run the restaurant. While living in Austin, he became accustomed to the culinary comforts of a bigger city, including specialty coffee. He decided Belton could benefit from lattes and cortados (espresso with a small amount of steamed milk), and in 2018 installed a sparkling La Marzocco espresso machine on a small counter in the restaurant.

“We try to keep it simple with the barbecue, but where we get more complicated is with the coffee and desserts,” he says.

The Millers opened Penelope Coffee Company, which roasts all its beans in a nondescript warehouse a few blocks away on South Main Street. The boutique operation produces a lighter style more in line with millennial tastes than the old-school dark roast that appeals more to drinkers raised on 69-cent gas station coffee

“This area is very nostalgic when it comes to their coffee,” says Chazz McAdams, head of coffee development. “People grew up on dark Italian and French Folgers roasts, no cream. There’s a lot of bite back when you charge $2.71 for a small coffee.”

It’s been an uphill battle, but they’ve been swaying locals with a medium-roast Guatemalan bean that mimics the chocolate flavors found in darker brews. They also offer beans grown in Kenya and Ethiopia, favoring natural processing techniques that maintain funky and complex flavors like blueberry, honey, and mulling spices. Their approach seems to be working—roughly 40 percent of their beans are sold in retail bags for home-brewing.

“Coffee is an important part of my everyday routine,” says Tyler Studinka, a regular who manages a nearby car dealership. “I used to drink three to four cups of a commercial dark roast, but Penelope roasts great coffee and knowing them and the passion they have for the product makes it that much more enjoyable.”

Coffee and barbecue may seem like an odd combination, but the acidity of the coffee makes an excellent complement to smoked meat. “I feel like the saltiness of the barbecue, if you’re sipping espresso or a cortado, accentuates the sweetness in the coffee,” Dusty says. Most order it after lunch as a pick-me-up before heading back to work.

Completing the trifecta of offerings are Lisa “Momma” Miller’s desserts (yup, Dusty’s mom). She started by baking one pie a day, but now her full bakeshop features some specialties drawn from her grandmother’s recipe book, including a chocolate pudding cake and the current bestseller, a sopapilla cheesecake with crust on top and bottom, and a sprinkling of cinnamon sugar.

“When she’s here, you can feel her energy in the building,” Dirk says of his wife while taking a break between talking to customers. “She thinks it’s all about the desserts, and I think it’s all about the barbecue.” No matter which takes center stage, they both pair well with a great cup of coffee.