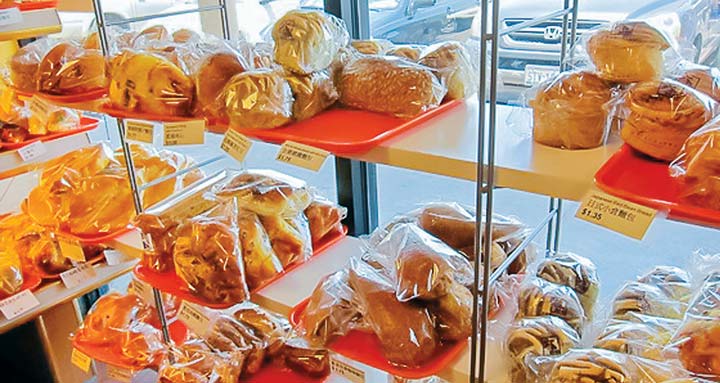 It takes a sense of adventure, as well as an adventurous palate, to explore ethnic dining areas as vast and sprawling as Houston’s Chinatown. Unlike Chinatowns in New York or San Francisco, which span several, walkable blocks, Houston’s Chinatown—which migrated from cramped and expensive midtown and downtown locations in the mid-1980s—now encompasses an eight-mile stretch along Bellaire Boulevard on the southwest side of Houston.

Dun Huang Plaza is at 9889 Bellaire Blvd., on the south side of Bellaire less than a block east of Beltway 8 (also known as the Sam Houston Tollway). Restaurant hours vary widely, but the vast array of options here mean you won’t be disappointed even if your first choice is closed. Most spots do not have websites but have a presence on Yelp and other sites. Find addresses here.

For those without a personal guide, venturing into this area—where signage is usually in a language other than English—is not only daunting but confusing. That’s where Dun Huang Plaza, located at 9889
Bellaire Boulevard less than a block east of the Sam Houston Tollway (Beltway 8), comes in.

One of the largest commercial retail complexes in the area, the plaza itself—comprised of four two-story buildings anchored by the Dun Huang Supermarket—is its own small Chinatown community, a one-stop shop where you can find groceries, dining, and entertainment. In this one plaza alone, approximately 30 restaurants offer everything from Chinese to Vietnamese, Taiwanese, Korean, Japanese, Malaysian, and Cantonese fare.

Once there, you can park your car and explore on foot. Though mornings tend to be sleepy at the plaza, one benefit for early birds is the abundance of options at Six Ping Bakery, including the whimsical Super Kawaii breads, which are pastries shaped like animals such as pigs, lobsters, and Hello Kitty. Everything costs less than $2, so it’s a fun place to shop for edible gifts to take home, or a quick breakfast on-the-go. Do like the regulars do: Grab an orange plastic tray, and pick up anything that looks good. I love the breads topped with sweet and salty shredded pork, the whisper-light sponge breads, and small oval loaves of Japanese cheesecake. In the refrigerator case, don’t miss the hokkaido cream puffs: The bite-size cakes are like an Asian version of a Twinkie, soft and moist, and oozing with an ultra-light cream filling.

For lunch, one of my favorite places is Fu Fu Cafe, a Chinese restaurant that is so popular, it opened a second location in the same plaza. The lunch specials are an excellent bargain here, when dishes such as caramelized fish in a clay pot, Mongolian beef, and salt-and-pepper shrimp can be had for $5 or $6. I especially like the xiao long bao soup dumplings, which come four to an order and are delivered to the table in a small metal steamer. When you pick up a dumpling, it sags with the weight of the soup inside, and then as you take a bite, the gingery pork broth gushes pleasingly in your mouth.

Another standout at Fu Fu is the pan-fried rice noodle pancake with beef and gravy. Topped with mounds of beef and greens in a complex brown gravy, the dish is spectacular thanks to a contrast of flavors and textures: crispy yet chewy, smoky and garlicky.

For Korean fare, try Tofu Village, which specializes in bubbling tofu hot pots known as soondubu jigae. Nearby, Café 101 draws couples and groups to gather for drinks and trendy Taiwanese cuisine to a soundtrack of Korean or Japanese pop music. For Malaysian food, both Banana Leaf and Mamak are solid choices, though Mamak is newer and more spacious. Mamak even has a viewing window into the kitchen, where you can watch the cooks toss the roti canai (a type of flatbread that is common street fare in Malaysia) high in the air like pizza dough; it’s quite the spectacle. Roti canai is usually ordered as an appetizer to be eaten with your hands; you break off pieces and dip them into a curry sauce.

Across the way, the tiny Tiger Den is Houston’s best spot for authentic Japanese Hakata-style ramen and robata (grilled) items such as yakitori (grilled chicken). Tiger Den opens at 5 p.m. and doesn’t take reservations, but any wait is well worth it. The spicy miso ramen and the black bean ramen are deeply flavored from 24 hours of simmering and are absolutely delicious—and a bargain for just $9 a bowl. Tiger Den’s grilled items, such as the beef tongue, chicken skin, or whole squid, are also extremely consistent, tasty, and very affordable. Finish with an order of the pandan donuts—crisp, fried squares of dough served with a green custard flavored with pandan leaves; they taste like a cross between a donut and a beignet, only better.

For late-night dining, in my opinion the coolest spot to check out is Giau Bar ’n Bites. Essentially a Vietnamese tapas restaurant, Bar ’n Bites is usually filled with Vietnamese Houstonians who gather to “nhau,” or snack, while drinking beer and cocktails. Not only can you sip on a cosmopolitan at Giau, but you also can dine on exotic dishes such as lemongrass-steamed black-pepper whelk (a type of escargot) or chargrilled Manila clams topped with peanuts and drizzled with oil and scallions. The clams, beautifully presented on a narrow porcelain plate, exhibit a delightful smokiness and a strong umami flavor, and pair immensely well with an ice-cold glass of Tsingtao or Heineken beer.

Dun Huang Plaza also happens to be a rewarding destination for dessert. Juice Box and Gelato Cup are popular spots for milk-tea bubble drinks and fruit-topped Taiwanese shaved ice bowls. For a special treat, however, find your way to Nu Cafe, where the claim to fame is something called “snowflake ice.”

To make this Taiwanese specialty, big round blocks of ice in flavors such as peanut butter, green tea, taro, and strawberry are placed on a spinning machine that shaves them into ribbon-like flakes, eventually forming a large triangular mound. Each order can be customized with a sauce and topping of choice (mochi balls, custard, lychee jelly, fresh fruit, and many others). Whether your choice is peanut butter ice with coffee jelly (highly recommended), or a strawberry ice with fresh mango and banana, the dessert is so unusual it’s worth the trek to Dun Huang just for the experience. Each bite of the snowflake ice dissolves on the tongue almost immediately, a sensation like eating icy-cold spun air.

So the next time you’re visiting Houston and hesitate because you want to try real Asian food but don’t know where to go, visit Dun Huang Plaza. Once you get there, it’s easy: All you need to do is speak the language of food.