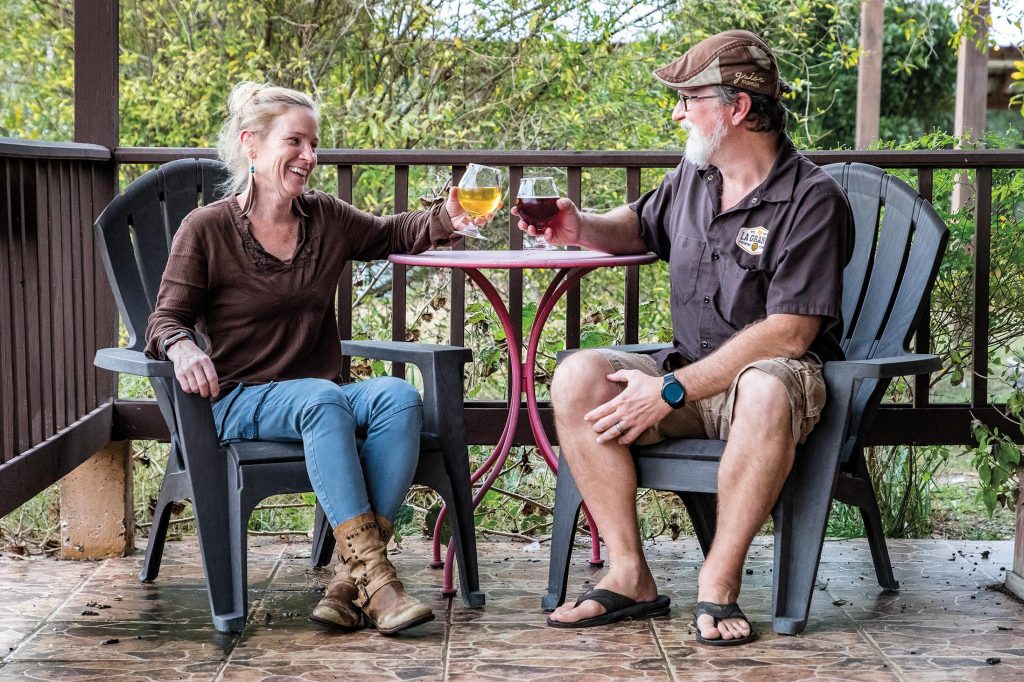 Rohan Meadery’s bucolic setting in La Grange entices guests to linger long after they’ve finished their pints of mead. The pastures, fruit trees, and grapevines that dot the rolling hills seem to glow in the late afternoon sun. Patrons gather under the sprawling live oaks and on the two open-air patios, where the sounds of laughter, clinking glasses, and live music mix with clucks, squawks, and quacks. The free-range chickens, ducks, and guinea fowl earn their keep by controlling insects on the farm and providing entertainment. 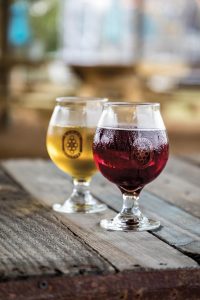 “We created the family-friendly place we longed for when our children were small,” proprietor Wendy Rohan says. She co-founded the meadery and Blissful Folly, the 30-acre organic farm on which the meadery sits, with her husband, John Rohan, in 2009. “We built the farm with the hope of creating a community around craft beverages.”

Mead is just one of the beverages they make and serve on-site, alongside wine and hard cider. Mead is mankind’s oldest fermented beverage, with the earliest archeological evidence of it dating to 7000 B.C. Like grain in beer or grapes in wine, honey is the main source of fermentation for mead.

The Rohans left Houston in 2008 to give their children the small-town upbringing they both enjoyed. As the couple contemplated what kind of business they could start, they settled on producing mead.

John first experimented with making mead (but not drinking it) in middle school. He was inspired by his great-great-grandfather, an immigrant from Moravia (a historic region in the eastern part of the Czech Republic) who settled in La Grange in the late 1800s and took up homebrewing. John went on to study chemical engineering and kept bees as a hobby. Wendy, a former high school science teacher, was knowledgeable about fermentation from her college lab courses on fungus, yeast, and micro-biology. The couple searched for mead recipes and began experimenting with one from the 16th century. Today, the Rohans use wildflower honey from the 20 or so hives on their farm as well as honey from Bee Wilde Bee & Honey Farm in Montgomery.

“We love the art and science of fermentation, which is the heart of it all,” Wendy says. “For us, it’s not about being the biggest business in Texas, but about how much we have our hands on it and in it.”

Rohan Meadery’s 14 styles of mead range from sweet to dry, with six to eight available at any given time. The myriad flavors include apple, cranberry, grapefruit, blackberry, and peach, and they can be sampled by ordering a flight. The meadery also offers pizzas, nachos, and traditional and vegan charcuterie boards. Live country music is a weekend staple.

Frequent customer Jill Hood, who lives about 30 minutes away near Columbus, first visited Rohan Meadery six years ago with her then-teenage sons. They were delighted by what they found.

“It’s just a happy, friendly place where you can get a healthy, delicious drink served by happy, friendly people,” Hood says. “Even if you don’t feel like talking, you can catch the breeze, watch the chickens running around, listen to music, and just breathe.”