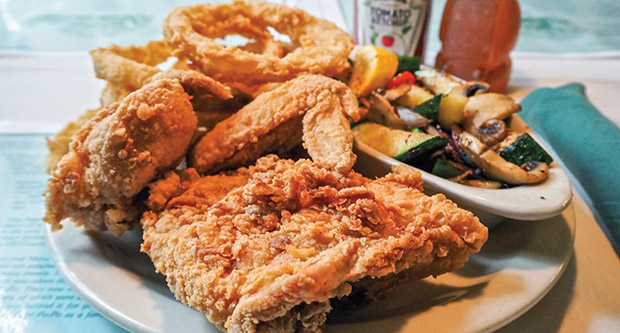 Though PoPo Restaurant is located just off the exit for Welfare, it’s actually on the edge of Boerne. But continue down the I-10 feeder as it curves to meet Waring Welfare Road, past the picturesque grazing longhorns of Don Strange Ranch, and you will arrive in Welfare, Texas.

The micro-community is marked by a historic white house bearing a wooden-railed front porch and a spray of prickly pears. The structure, originally a general store and post office in the 1880’s, was abandoned for twenty years before Gabrielle McCormick purchased the land, then launched the Welfare Cafe in 1998.

“I was working in San Antonio doing property management and I just decided one day I wasn’t going to do that anymore,” she calls. “Instead, I was going to open this as a cafe. And I didn’t know what I was doing. I just did it!”

The wood-rich dining room is filled with relics from the past, all found on sight. Framed black and white photos adorn one wall, while vintage ads for cough syrup and corn flakes hang from another. One shelf displays a collection of grocery items— a tarnished basket, cans of beans and peanut butter, an archaic canned ham, curvy glass bottles— and next to that, some curious hand-powered kitchen tools hang from a strip, looking sturdy as ever. The former postal office is still set up as a work space, draped with leather bridals and belts and crowned with one fitting cowboy hat.

A biergarten, where local musicians can be heard playing on the weekends, wraps around the restaurant, and a network of paths and barnwood fencing connects to a red barn event space, an organic garden and pens for chickens, goats and PeeWee, an extremely well-fed potbelly pig.

While McCormick maintained as much of the original property’s integrity as possible, her menu is a different story. When she first opened, she knew she wanted to honor her German heritage, but through her own unique lens.

“I wouldn’t be happy just doing schnitzels,” she says. “There’s more to me than that— I’m more creative than that. And once I figured out I could do it, I just kept going.”

The Welfare Cafe menu certainly features staples of both Texan and German cuisine, like wedge salad and crispy potato cakes served with apple sauce and sour cream, but McCormick also creates fun mash-ups like sausage sauerkraut balls with poblano ranch and featherweight pork schnitzel topped with accoutrements like artichoke hearts, lemon and butter or asparagus, ham and a fried egg. And a large suspended chalkboard displays the days specials, which vary depending on the yields of her own garden and the local farmers and ranchers from which she sources.

As the final course in a very satiating meal, I’m taking a bite of her fresh apple strudel, the farm dog snoozing at my feet, when I ask McCormick the question that’s been on my mind: how big is Welfare, Texas exactly?

“We count ourselves and the people next door and the animals, so it’s probably up to 15 or so,” says McCormick before pausing with a thought. “Maybe 17, counting the rescue horses.”