The Boiling Pot in Rockport 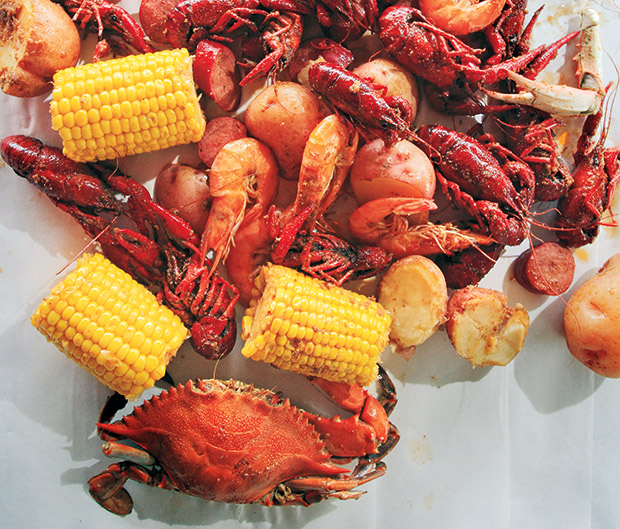 No fork and knife needed: At the Boiling Pot in Rockport, waiters spill buckets of spicy seafood directly onto your table.

Few places embody the spirit of a city more convincingly than The Boiling Pot, which recently celebrated its 30th anniversary in the coastal village of Rockport. Known for its fresh seafood, served boiled with Cajun spices, The Boiling Pot is arguably Rockport’s most popular dining establishment. Over the years, the space has taken on its own character, drawing from both area history and local tradition while becoming a coastal institution in its own right.

Outside, the building is wrapped in corrugated metal, a facade punctuated by a weathered white sign bearing the restaurant’s name and a black pot simmering over flames. Surrounding the parking lot, palm trees sway in the steady breezes rolling inland off of Aransas Bay.

Inside the restaurant, neon beer signs create a warm glow around tables of hungry diners. Butcher paper covers the tabletops, with handfuls of crayons at the ready, so patrons—young and old alike—often color and doodle as they wait for their feast to arrive. The resulting drawings—hundreds of them—have been stapled to the walls between surfboards and other coastal memorabilia, layered one on top of the other, like the scales on a fish.

The late Dorothy “Dot” LeBlanc started The Boiling Pot in 1985 after recognizing that people were looking for a place in town where they could eat simple, well-prepared boiled shrimp—not fried shrimp, blackened filets, or other preparations common to the few surrounding local restaurants. Dot, who was then selling fresh shrimp, oysters, and other seafood at a small market in town, began to cook a few items on-site, and her customers loved it. Soon thereafter, Dot opened The Boiling Pot. Today, the restaurant is still known for its fresh, boiled-to-order seafood; everything on the menu—save for the gumbo and a few à la carte items—is boiled. Furthermore, The Boiling Pot’s food is known for its zesty seasoning, a complex combination of salt, garlic, and a house-made blend of Cajun spices.

“It’s Dot’s special spice,” said Manager Ramona LeBlanc, Dot’s daughter-in-law. Ramona and her family have carried Dot’s legacy forward since her passing in 2013. “I think my mother-in-law made it very special for so many people,” says Ramona of the restaurant’s enduring customer loyalty. “She was always here tending to customers and making sure they were happy. That was her big thing; making sure everybody was enjoying themselves.”

Today, The Boiling Pot continues to serve some of Rockport’s most famous food, prepared from recipes that haven’t changed in 30 years. Regular customers and newcomers alike find it hard to pass up the “Cajun Combo,” which includes a blue crab, a half-pound of shrimp, a half-pound of sausage, boiled new potatoes, and crunchy corn on the cob.

“The Super Duper” (a bucket full of boiled corn, potatoes, sliced sausage, crab, crawfish, and shrimp) is another fan favorite, and other popular menu items are the gumbo, the key lime tart, and of course, The Boiling Pot’s roster of more than 80 different beers and wines. On an average weekday, the restaurant will go through almost 60 pounds of shrimp alone, with surging numbers on the weekend.

The Boiling Pot is a high-volume, family-style dining experience where standard utensils aren’t required; depending on what you order, waiters will dump your feast directly onto the table. You’ll tackle crawfish, sausages, stone crabs, king crabs, boiled potatoes, and ears of corn piled into a mini mountain tinted fiery orange and red by cayenne and other Cajun spices. If you don’t know how to eat a crab, the waiters can show you; each diner receives a small wooden mallet to crack the shells. Diners who don’t want to go home with splattered shirts tie plastic bibs around their necks to deflect the juices, and rolls of brown paper towels stand at the ready, too. But nobody seems overly concerned about a little mess; orange-tinted fingers and red lips are evidence of a good time.

For above all, The Boiling Pot offers friends old and new a casual spot to eat tasty boiled seafood, enjoy cold beer or a glass of wine, and join together in a decades-old coastal tradition. For some people, the appeal stems from the satisfying sound of a crab shell cracking beneath a mallet. For others, it’s the smooth, salty taste of the sea that lingers on the tongue after slurping down a Gulf oyster. And for others still, it’s the simple pleasure of being present in life, awakened to the flavors of Rockport’s charms. This is perhaps The Boiling Pot’s most endearing gift, and one that has shaped the experiences of all who come for a taste.