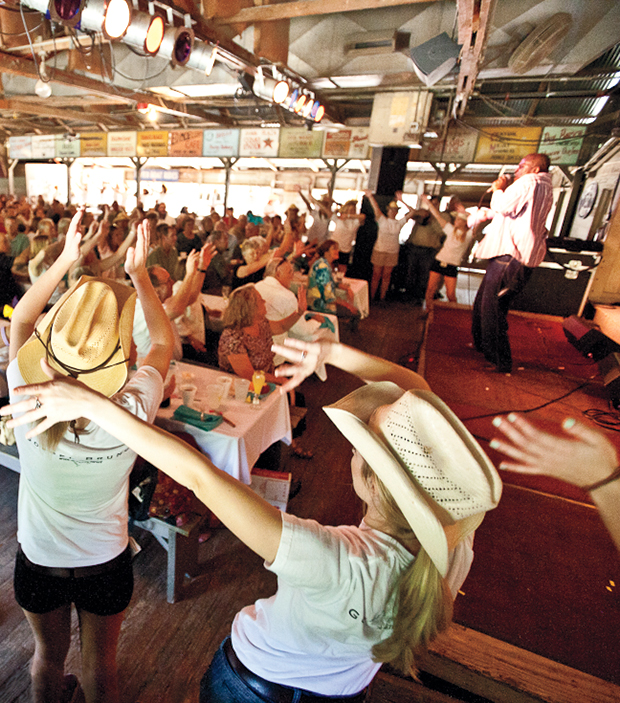 Ready yourself for a buffet of breakfast and the Holy Spirit at Gruene Hall’s Gospel Brunch with a Twist. (Photo: © Jim Flynn/Courtesy Gruene Hall)

People pack the wall-to-wall tables in Gruene Hall, and the band has hit full swing when I walk in one summer Sunday morning. Folks clap along to the music as they dig into plates of bacon and eggs, roasted turkey, and mashed potatoes.

While I find a seat, singer-songwriter Bret Graham launches into Kris Kristofferson’s 1970s hit, “Why Me, Lord?”—sounding uncannily like Kristofferson himself, who has in fact played here.

Gruene Hall’s monthly Gospel Brunch with a Texas Twist started 18 years ago with a birthday celebration for Pat Molak, co-owner of the New Braunfels dance hall and The Gristmill River Restaurant next door.

“We had a party the night before and did brunch on Sunday morning at the Gristmill with a gospel music band, Bells of Joy,” recalls Mary Jane Nalley, Molak’s business partner. “Pretty soon, we started doing it every month, then moved it to the dance hall because it grew bigger than the restaurant could handle. It’s a tradition now.”

Early on, Molak asked Graham to emcee the event, which is based on a New Orleans-style gospel brunch.

“I had played at Gruene Hall for about a year, and Pat knew I threw some gospel music into my sets,” says Graham, who lives in the nearby community of Canyon Lake.

As the show took shape as a monthly offering, the Austin-based Bells of Joy stayed on board, and Nalley called Buckner Fanning, retired longtime pastor at Trinity Baptist Church in San Antonio, and invited him to give a brief sermon. Nalley had heard one of Fanning’s radio segments and read his book, God Drives a Pickup Truck.

“I just called Fanning up cold, told him about the brunch, and asked if he’d come and give us 10 minutes of uplifting words of wisdom,” she says. “When he said yes, I couldn’t even believe it.”

The Gospel Silvertones, also from Austin, later replaced the Bells of Joy, whose members had mostly retired over the years. Fanning passed away in 2016 at 89, and the show has yet to fill his impressive shoes. But Graham says the event just keeps getting better.

“I think it was sort of meant to be,” Graham adds. “I went to Nashville back in the early ’90s with hopes of making it, like a lot of people. I prayed for direction and really feel God led me to continue what I was doing, but some place I liked better. Texas seemed like that place. When Pat asked me to emcee the brunch, that gave me an opportunity to try to become this thing I set out to be—a guy who can play guitar and sing and entertain, all at the same time.” 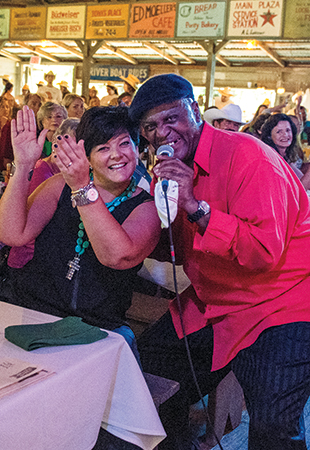 After singing for about 30 minutes, Graham and his four-member band turn the stage over to the Silvertones. “I can’t say enough good stuff about the Silvertones; they bring real high energy, soul, and passion,” Graham says.

As if to prove his point, when the Silvertones break into “This Little Light of Mine,” all over the hall people wave their index fingers in the air and sing along. Some also join in when lead singer Brian Murphy belts out “People Get Ready,” a 1965 hit by The Impressions: “There’s a train a-comin’; you don’t need no ticket, you just thank the Lord.” The band follows that with a rousing version of the Doobie Brothers hit “Without Love.” Hands clap, little kids and the servers dance along, and I even hear a few shouts of “hallelujah!”—not something you’d normally expect in a bona fide honky tonk.

“To me, there is a spirit to Gruene Hall, a good feeling when you walk in,” Graham says. “It takes you back in time, to how it used to be in Texas. Great food and great music.”

No doubt this spread would impress the German settlers who built Gruene Hall in 1878, making it one of the state’s oldest dance halls. The building served as a community center, hosting weekly dances and everything from high school graduations to badger fights. By the 1970s, with the dance hall and surrounding structures endangered by plans for housing development, preservationists managed to secure Gruene’s listing in the National Register of Historic Places.

Nalley and Molak got involved when both became disenchanted with their jobs in San Antonio—Nalley in banking and Molak in real estate. Together, the friends prowled the Hill Country looking for a dance hall. Molak bought Gruene Hall and later rescued the nearby water tower and a former cotton gin and gristmill building that became the restaurant. Nalley joined the business within a couple of years.

Gruene Hall found its groove nurturing many former “new talents,” such as George Strait and Lyle Lovett, while offering big names—Willie Nelson, Merle Haggard, and Kristofferson among them—the chance to play in an intimate venue with historic character.

During my visit, Graham rejoins the Silvertones onstage for the final few songs. The morning ends, as always, with “When the Saints Go Marching In,” a New Orleans tradition and fitting benediction. Servers in cowboy hats and boots lead dancers through the picnic tables, napkins swinging above their heads in time with the music.

You definitely want to be in this number.