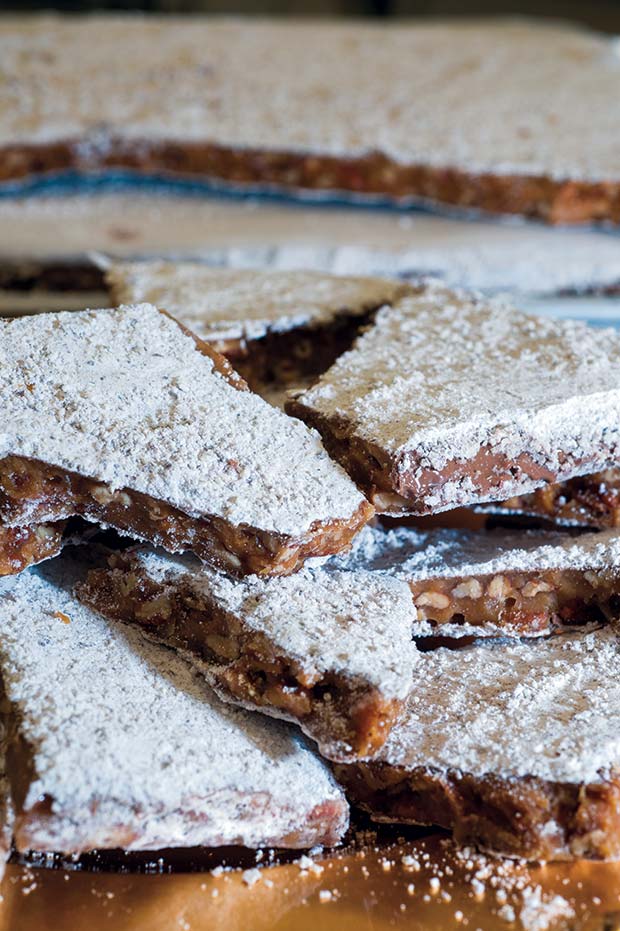 The first thing I notice when I walk in the door at Susie’s South 40 Confections is the unmistakably sweet scent of candy—the rich, buttery aroma of caramel; the sharp, earthy scent of chocolate.

As I stand in the entryway, in the shadow of a 22-foot working windmill that owner Susie Hitchcock-Hall brought in for “eye candy,” I’m struck by the bounty of real candy. Soon, a couple and their young son walk through the door behind me. “Yum!” the boy exclaims. You said it, kid.

Housed in a brand-new, 15,000-square-foot building in the shadows of Midland’s downtown skyscrapers, Susie’s factory store is a working confectionery that’s also open to tour groups and individual candy-lovers looking for a sugar fix. Hitchcock-Hall, a dynamo with an obvious love of life (and a serious sweet tooth), happily offers tours to anyone interested in learning more about the candy factory’s operations.

In the 24 years that she’s been in the business, Hitchcock-Hall tells me, she has shipped handmade chocolates, pralines, and caramels to customers in all 50 states, as well as to 37 countries (and even a few U.S. presidents). Right now, in fact, some of her employees are putting the finishing touches on hundreds of bags of Texas Trash (a blend of cereals, pretzels, and pecans coated in white confection) for attendees at an upcoming event in Houston.

Looming over the candy factory’s entryway is a giant Texas-shaped cookie cutter, 10 feet across at its widest point. Hitchcock-Hall sees me gawking at it, and tells me that it once held the 1.5-ton piece of toffee that she made to celebrate the 2002 opening of her last factory. The two-million-calorie candy was so big it had to be made in the back of a flatbed truck; it even garnered a mention in the Guinness World Records. After the opening ceremony, it was donated to appreciative local charities.

Fortunately, Hitchcock-Hall is also committed to making candy in more modest portions, and the factory store is an ideal way to get a behind-the-scenes look at the process. One hundred feet of windows allow visitors a full view of all the work that goes into making the dozens of candy varieties that Susie’s South 40 is known for. About a dozen employees bustle about, performing the various jobs that make the factory run smoothly. As we look on, a woman carefully dips strawberries into melted Belgian chocolate; another takes a tray of caramel and begins slicing it into cubes; a third carefully apportions candies in cellophane bags to be tied with bright red ribbons; and a fourth drizzles white chocolate onto a tray of fudge squares.

For all the pleasure it may bring, candy-making is a serious business that requires precision and attention to detail. As we gaze out at the factory floor, Hitchcock-Hall points out the many features that allow her employees to ensure consistency and quality between batches, including stainless-steel tables with built-in, water-based refrigeration systems. The process has evolved monumentally since the business started in 1991, when Hitchcock-Hall made toffee in her home kitchen on a 40-acre ranch just south of Midland.

When you visit, budget time to stop by the extensive gift shop; Manager Kathleen Curtis offers every visitor who comes in the door a piece of Texas Pecan Toffee. The toffee, rich and buttery with just the right amount of crunch, was Hitchcock-Hall’s first recipe; it’s best served straight from the freezer, Curtis says. While nibbling on toffee, visitors can browse the shop, which offers gourmet foods such as olive oils, specialty salts, and all manner of condiments in addition to candy. One corner features children’s candies, with shelves dedicated to giant rainbow lollipops, jawbreakers, and old-timey favorites such as Slo-Poke caramel chews and Nick-L-Nip syrup-filled wax bottles. Interspersed throughout are small plates offering bite-size versions of all the different candies, so you can taste before you buy. Hitchcock-Hall also takes pains to decorate the store for every holiday; on my visit before Valentine’s Day, it was festooned with red ribbons, heart-shaped balloons, and teddy bears.

Hitchcock-Hall has put her personal stamp on each of the many different products that Susie’s South 40 has for sale. She’s involved in coming up with the names for every new kind of candy, as well as unusual packaging such as Texas-shaped boxes. Each variety has its own distinct look. “Winners,” which are caramels enrobed with Belgian chocolate, earned their name when an early taste-tester deemed the recipe “a winner.” They come in an elegant black box with an image of a gold trophy on the front. “Kickers” pralines come in a cute cowboy boot-shaped box; the packaging is red, in honor of Hitchcock-Hall’s favorite pair of dancing boots.

Susie’s South 40 also does a brisk business in gift baskets, which can be tailored to any taste. Hitchcock-Hall points out a few of the more creative basket shapes hanging on the wall, and I wonder: Where else in the world can you get a gift basket shaped like an oil derrick or a pump jack? “Out here, we’re all in the oil business, even if you are the local sugar pusher,” Hitchcock-Hall says.