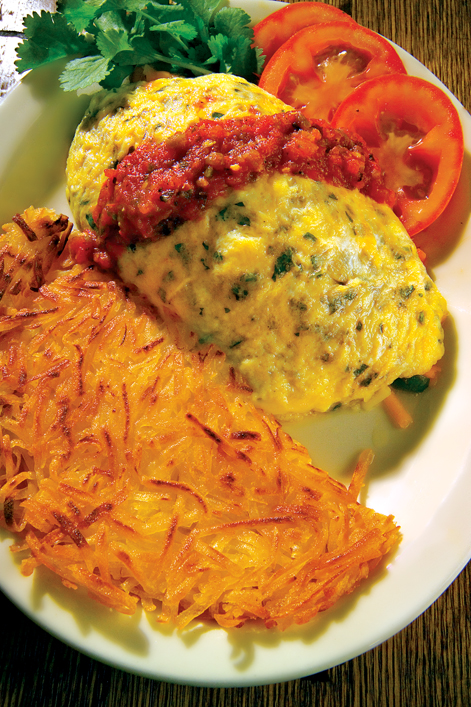 Breakfast at the stockyards: Youngblood’s tops its green c hile-packed omelet with freshly made salsa. (Photo by J. Griffis Smith)

At first glance, Youngblood’s Stockyard Café in Amarillo appears to be your everyday rural coffee shop. If you spend a little time here, however, you realize that the unassuming café is the heart and soul of Amarillo’s legendary stockyards, where more than 300,000 head of livestock are bought and sold each year. And the food here is a cut above what you’d expect to find at a restaurant attached to an auction barn.

Wandering in on a chilly Wednesday morning, I find a sea of diners in roomy barn coats, gimme caps, and cowboy hats. Ranchers and farmers fill half of the two dozen tables; they’re catching up on news and laughing a lot, lingering over cups of joe. Turns out, I’m a day late for the really big crowds, which coincide with Tuesday morning’s cattle auction.

Nevertheless, the café has a lively, warm ambiance that I find comforting. The interior cinderblock walls are hung with photos of John Wayne, a barbed-wire display, frying-pan art, and a couple of buffalo heads, one sporting a straw cowboy hat and the other a plastic flower tucked behind one ear. The back wall features a painted Texas flag. Burlap sacks serve as curtains. Obvi-ously, this café doesn’t take itself too seriously.

I hear a man order coffee for himself and a Dr Pepper for his little girl, who’s in pigtails. And then, just when I believe time stopped here 30 years ago, I see a rancher pull out his iPhone to take a call.

Still, there’s no finding fault with a place that serves breakfast all day. One bite into my biscuits and gravy, and I nearly swoon. The creamy blanket over the fluffy biscuits has clearly been made with bacon drippings. Then, I taste my omelet, stuffed with grated cheddar-jack cheese and at least a cup of green chiles, and I close my eyes in a moment of rev-erence. On the side, there’s a bowl of chunky salsa I’m sure was made that morning.

So, how did a coffee shop next to an auction barn come up with such memorable food? Enter Tim Youngblood, café owner and 1988 graduate of the Culinary Institute of America in New York. When he took over the Stockyard Café nine years ago, Youngblood decided to raise the bar a bit for his meat-and-potatoes customers.

‘The food isn’t high-dollar, but I use the same principles I learned in culinary school. Nothing is made ahead of time.’

A native Texan whose family has owned restaurants for three generations, Youngblood credits his maternal grandfather, John McGill, with teaching him the value of cooking from scratch. “Grandpa was a baker in the Army during World War I, and he always wanted to cook at the Waldorf Astoria in New York,” he recalls. Youngblood was in his 30s, cooking in Amarillo, when he made a decision: “I thought, if I want to continue in this business, I’ll be working for people who graduated from culinary school, so I may as well go myself.”

During his two years at the CIA, he followed his grandpa’s dream by talking his way into a culinary-school externship at the Waldorf Astoria Hotel. After graduation, he worked for six years in New York, where one of his jobs was executive chef at the Harbour Lights restaurant. At the time, The New Yorker touted it as the best restaurant in the Wall Street area.

Youngblood eventually returned to Amarillo, opening a small eatery in the late 1990s. In 2001, he purchased the Stock-yard Café, and created a menu with a range of homespun favorites, all cooked to order, plus items such as posole, shrimp-and-chicken gumbo, and New York strip. However, his chicken-fried steak—made from top sirloin, tenderized on-site, and sautéed on a flat grill—is the bestseller.

“The food isn’t high-dollar, but I use the same principles I learned in culinary school. Nothing is made ahead of time,” Youngblood says. “We don’t cook it until you order it, and we use fresh ingredients.”

The café’s reputation for superior CFS grew to the extent that the Travel Channel’s Man Vs. Food program featured it last year. “We saw more out-of-towners—and a 35 percent increase in our chicken-fried steak orders—after the show,” says Youngblood. Catering has become big business, and the restaurant now serves 1,200 to 1,400 customers a week.

Tim Youngblood shares the spotlight with his wife, Vicki, whose own version of CFS—it’s topped with a green chile gravy—is the house specialty on Friday evening. About a year ago, the couple opened a second café called Vicki’s Place in the historic Amarillo National Bank building downtown. It offers some of the same dishes, plus sandwiches and other light fare.

Traffic at the Stockyard Café picks up when team-penning and roping events take place at the nearby fairgrounds. And when horse shows come to town, crowds of visitors find their way to eat here.

Finished with my delicious breakfast, I pay the cashier and head for the interstate, happy to keep the snapshot of farmers and ranchers fresh in my mind, and the memory of savory green chiles with me all day.