What the Heck is Pepper Steak?

One editor’s quest for the southwestern Hill Country delicacy 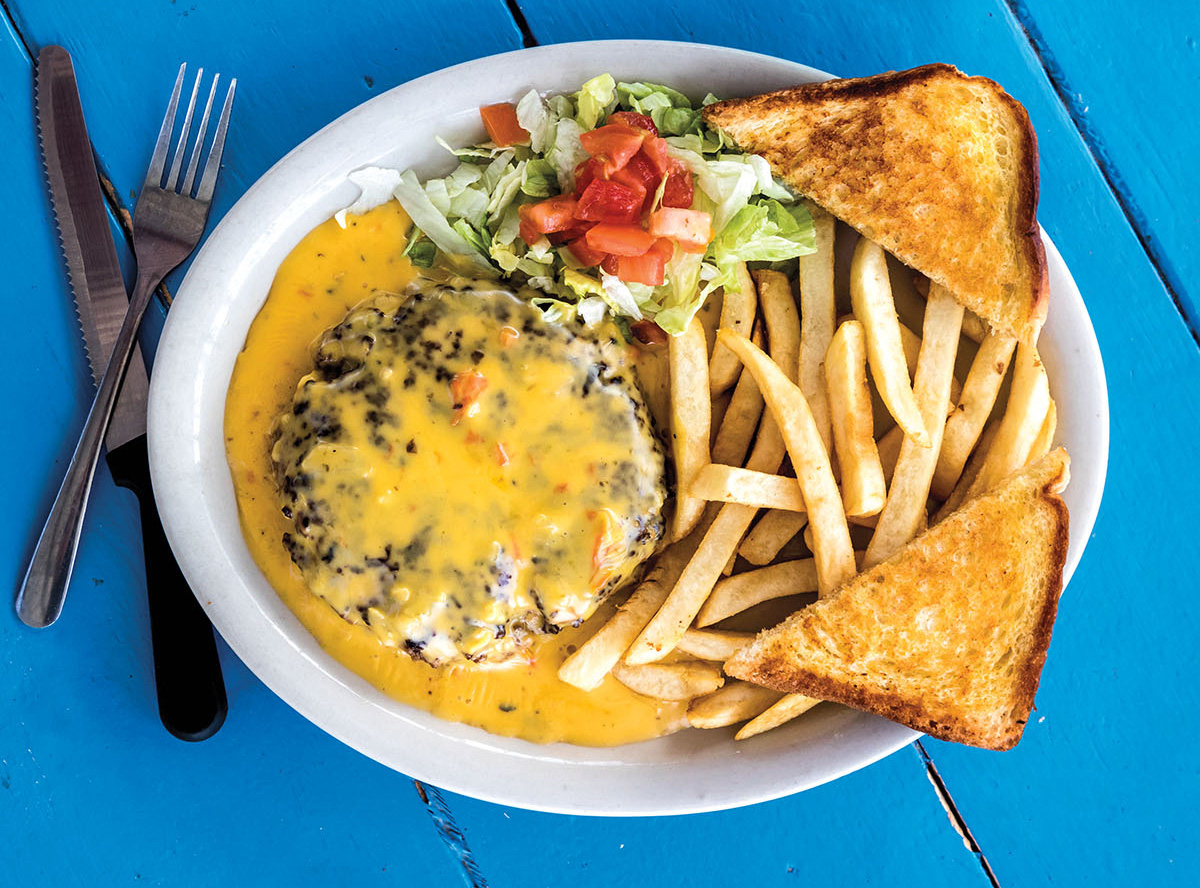 On a trip to the Frio River nearly a decade ago, I pulled into Mama Chole’s Mexican Restaurant in Leakey and perused the menu, thinking I’d end up with a plate of enchiladas or another Tex-Mex standard. Then something different caught my eye: pepper steak. Not the stir-fried American Chinese version you might think of, but a dish described on the menu as ground beef stuffed with jalapeños and cheese, and then grilled and bathed in more cheese. Intriguing—and delicious.

The next day, as I studied the menu at Neal’s Dining Room, a 94-year-old café perched on a bluff of the Frio River, pepper steak appeared again. This version was an oval pocket of ground beef stuffed with serranos and cheese, grilled and served with more melted cheese and serranos on top. Another home run.

“What gives?” I thought to myself. It was like I’d discovered the secret hippie love child of a Salisbury steak and a cheeseburger that got together after a spicy day of tubing on the Frio. I grew up on Tex-Mex, yet I had never heard of “pepper steak,” a dish worthy of comfort-food stardom.

The memory of pepper steak stuck with me, a rare personal discovery in an era of food-media saturation. So last summer, I set out to see what I could learn, returning to the southwestern edge of the Hill Country in pursuit of my new go-to Tex-Mex dish.

It took only a couple of phone calls to determine that my first stop should be Hermann Sons, the self-proclaimed home of pepper steak. Using a custom blend of hamburger from Dziuk’s Meat Market in nearby Castroville, Hermann Sons’ “Original Alvin’s Pepper Steak” is a two-third-pound beauty stuffed with onions, peppers, cheese, then grilled on a flat top. My steak arrived with a crisp brown sear and a small streak of cheese hinting at the goodness inside. 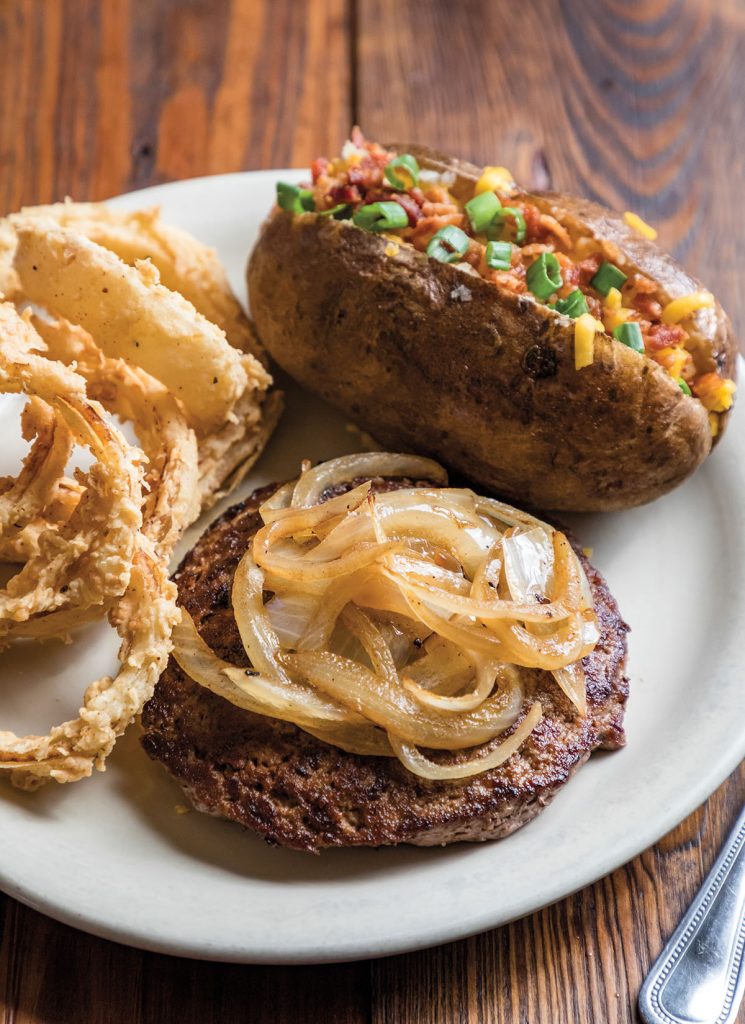 Hermann Sons in Hondo claims to be the originator of pepper steak. Pictured is their Original Alvin’s Pepper Steak alongside onion rings and a baked potato.

“My grandpa just came up with it; how he did, I don’t really know,” says Bryce Britsch, the third-generation owner of Hermann Sons. Framed newspaper clippings recall Alvin Britsch’s entry into the restaurant business in 1937, when he opened Bobcat Grill in Hondo. Alvin opened Hermann Sons in 1946, and pepper steaks have been a favorite ever since.

“It’s always been our staple,” he says. “We like to say we invented it, but it’s not rocket science. The cheese gives it the flavor, and when the onions are baked in the cheese on that grill…it just does something. If I had a dollar for each one I ate, I’d never have to work again.”

In a town increasingly populated by tourists and part-time residents, Jimmy Albarado is a certified local. His family has been around since his great-grandfather moved to Rio Frio (about 7 miles from Leakey) in the 1890s. Jimmy married the girl next door, Alma, and the couple opened Mama Chole’s in 1998.

Taking its name from Jimmy’s grandmother—Chole is a nickname for her name, Soledad—the restaurant is a family affair. All four of the Albarados’ children have worked for the restaurant, and when I visited, Jimmy was hosting and Alma was cooking.

Alma prepared my pepper steak—grated cheese and pickled jalapeño slices folded between two quarter-pound hamburger patties—on a flat-top grill, where it sizzled alongside fajitas. Alma says she’s seen an uptick in pepper steak orders with the popularity of low-carb diets.

Jimmy ate his first pepper steaks as a kid when his mother made them at home, but Mama Chole’s didn’t add them to the menu until about 10 years ago. “The reason we put the queso on ours is sometimes I felt it didn’t have enough cheese,” Jimmy says. “And for me, the cheese is what makes it good.”

When Tom and Vida Neal opened Neal’s Lodges tourist camp on the Frio River in 1926, they reserved a prime location for the café. Guests visiting the seasonal Neal’s Dining Room today can sit at the same cedar-post tables that have been around since the beginning and take in a view of the sparkling Frio River and juniper-green hills beyond.

Chase Roosa, the Neals’ great-grandson and fourth-generation manager of the café, still serves classics like fried chicken and chicken-fried steak that have been on the menu for nearly a century. Added in the 1980s, pepper steak is a relative newcomer, but it holds its own.

Neal’s version tucks fresh serranos and cheese inside an 80/20 hamburger steak weighing two-thirds of a pound. The seasoned meat comes off the flat-top grill as a flavorful pocket, juicy and cheesy.

Roosa says pepper steaks are Neal’s second or third top-selling item (behind chicken-fried steak, naturally). “You go to some restaurants, and they’ll just pile the peppers and cheese on top of it—that’s a hamburger steak with cheese and peppers on it,” Roosa says. “There’s a difference.”

Tacy Redden had no experience running a restaurant when she and her husband, Rusty, bought Lost Maples Cafe in 1986. “I learned by the seat of my britches,” Tacy says. One of her early lessons came from a man who ordered a hamburger steak. He griped about the onions served on top and then suggested putting cheese and peppers in it.

“I never again put onions on a hamburger steak—I grill them and put them on the side,” Tacy says. “And we’ve had a cheese pepper steak ever since.”

Set in a 1907 building that once housed a doctor’s office and a pharmacy, Lost Maples Cafe has that small-town feel where the waitresses know everybody, and the walls are filled with antiques, trophy deer, and local photos.

Lost Maples Cafe makes its pepper steaks with 80/20 ground chuck from the Reddens’ Mercantile Meat plant just down the road. The seasoned meat, stuffed with cheese and pickled jalapeños, arrives hot off the charbroiler with melted cheese and a toothpick-speared jalapeño on top. Tacy says the juicy pepper steaks are popular with older people who have difficulty chewing steak cuts, as well as with her grandchildren when she makes them at home.

“Sometimes I wrap them in bacon—they’re really good like that too,” she says. “Kids love it.”

In fact, pepper steaks are easy to make at home, and I’ve been experimenting with my own version (see sidebar). I’ve yet to see pepper steak on a menu in Austin, San Antonio, Houston, or Dallas, but my eyes are now wide open to their prevalence in the southwestern Hill Country. I may be late to the pepper steak party, but I’m glad I got here when I did.

Pepper steaks are as simple as they look. Lean ground beef doesn’t shrink as much, and it generates less grease, which is convenient if you’re using a frying pan.

INGREDIENTS
Two ground-beef patties, about one-quarter to one-third pound each
Seasoned salt of your choice
A handful of grated cheddar cheese
Pickled or raw jalapeños or serranos, sliced or diced

DIRECTIONS
Form two beef patties as you would for hamburgers. On one of the patties, place the cheese and peppers. Press the second patty on top to encase the cheese and peppers. Crimp the edges to contain the good stuff. Cook the steak on a grill or frying pan as you would a hamburger. Garnish with more grated cheddar, peppers, or chile con queso.