For Quiet on the Coast, Escape to the Mother Lagoon

When you’re skimming the surface of the Laguna Madre at 30 miles an hour, nature doesn’t just rule. It overwhelms.

Shortly after daylight on the most remote stretch of the South Texas coast, husband-and-wife captains Aubrey Black and Sally Moffett zip past concentric circles marking spots where mullets work the surface. A redfish wiggles its silvery, one-black-dotted tail above the water to dine on shrimp in the seagrass, and squadrons of sea trout push by in semi-organized vees.

As we approach a sandbar in our inches-drafting catamaran fishing boat, a swirling swarm of several hundred ducks launches into the sky above us. 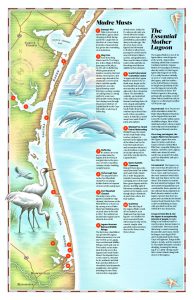 The horizon line vanishes. I can’t figure out where the water ends and the sky begins. When the morning sun finally climbs high enough to burn through the overcast, it pierces the gray gloom with bright-yellow rays shooting between the swiftly scudding clouds coming off the Gulf of Mexico. Pretty soon, patches of blue peek through, and the gray falls away. In full sunlight, the tranquil water appears startlingly clear.

There are few places in and around Texas where the visible fish—plus dolphins, peregrine falcons, and brilliant-pink roseate spoonbills—outnumber the people viewing them. The Laguna Madre is one of those places, the only body of water in the state that truly qualifies as extreme.

A skinny, elongated bay, the laguna extends from near Corpus Christi south 130 miles to Port Isabel at the southern tip of the state. No more than 7 miles across at its widest point and with an average depth of less than 4 feet, the “Mother Lagoon” separates Padre Island—the longest undeveloped barrier island on the globe—from the most severe, remote mainland along the coast: the South Texas brush country historically known as the Wild Horse Desert.

Fortunately, most of the hardy souls willing to make the effort to get on the water know this is not a place to run out of fuel or get stranded. And they know it’s worth the trouble for a quiet alternative to the lively resort towns just up the coast, like Port Aransas, or down the coast, at South Padre.

“It’s a fascinating body of water,” says Buzz Botts, a naturalist and education coordinator for Padre Island National Seashore. “If you take a boat out there, it’s a beautiful place to come just to get away from it all.” 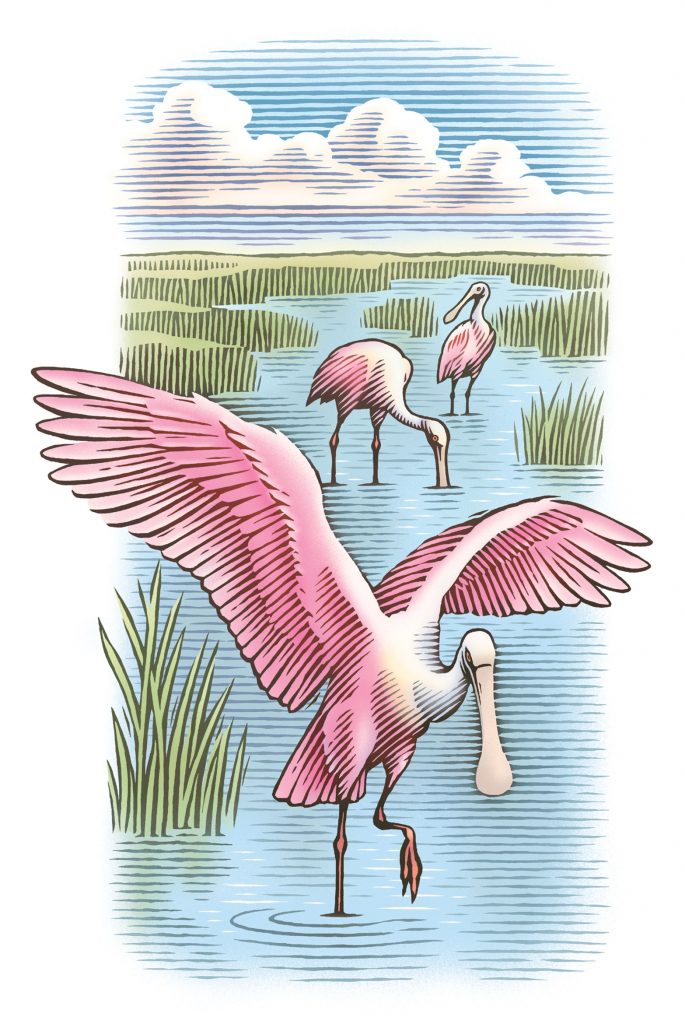 For our journey into the heart of the Laguna Madre, Captains Black and Moffett launch their speedy boat from a county park at Loyola Beach on Baffin Bay, the major inlet of the laguna, next to the couple’s three-year-old resort, the Baffin Bay Rod and Gun Club.

Baffin Bay can be intimidating. It’s tricky to navigate due to the presence of reefs created by petrified colonies of serpulid worms, which can shred a boat bottom like coral and make the bay extremely treacherous if you don’t know where you are going. Baffin’s waters are even more saline than the Mother Lagoon, because freshwater inflow is limited to direct rain runoff in the drainages. The conditions are ideal for record-size speckled seatrout and redfish, which drew Black and Moffett here about a decade ago.

“This is the mecca of Texas kings,” Black waxes poetically as he steers the boat deftly through channels he’s memorized. “This is the place people talk about. It’s full of rocks. It’s a mystery.” 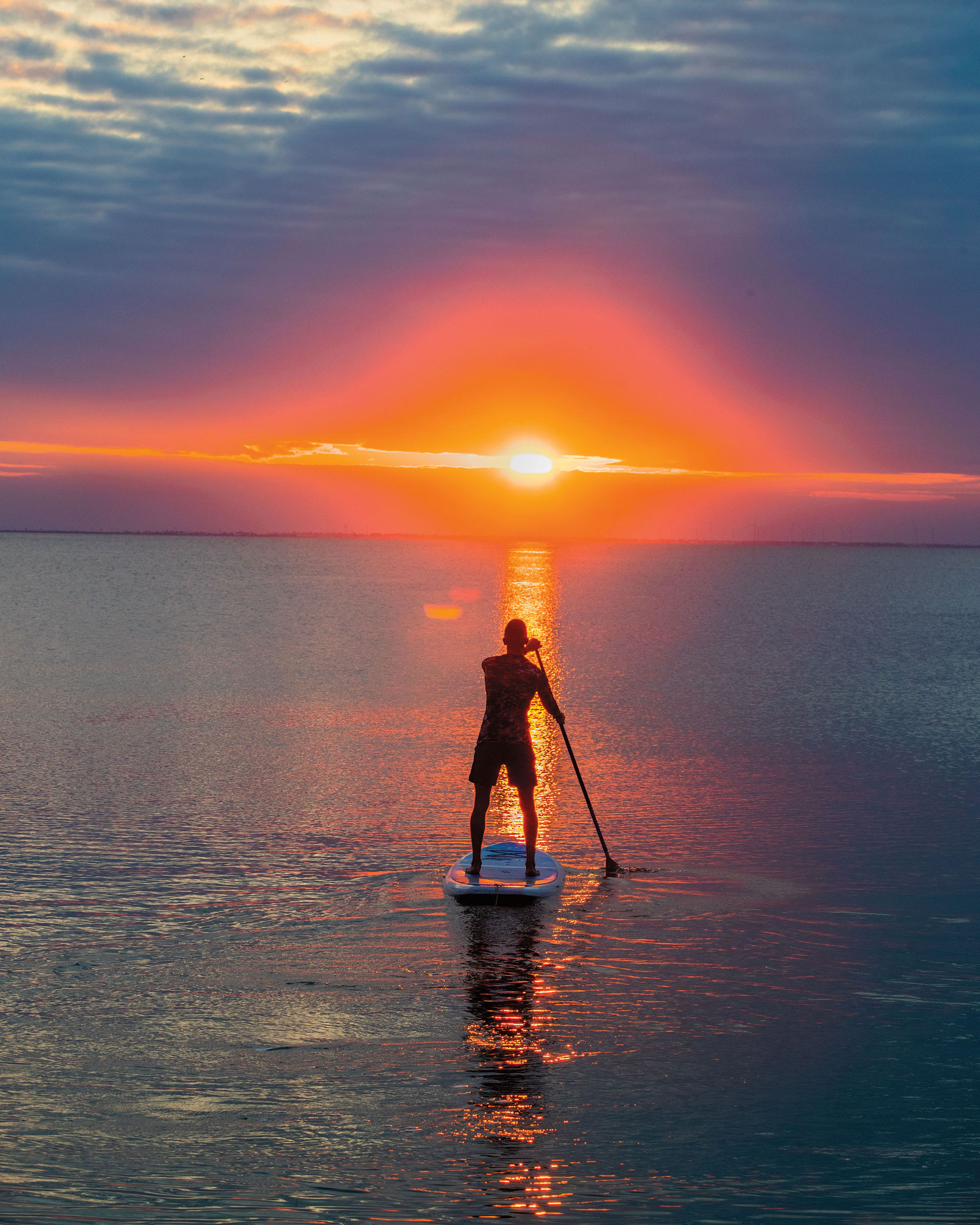 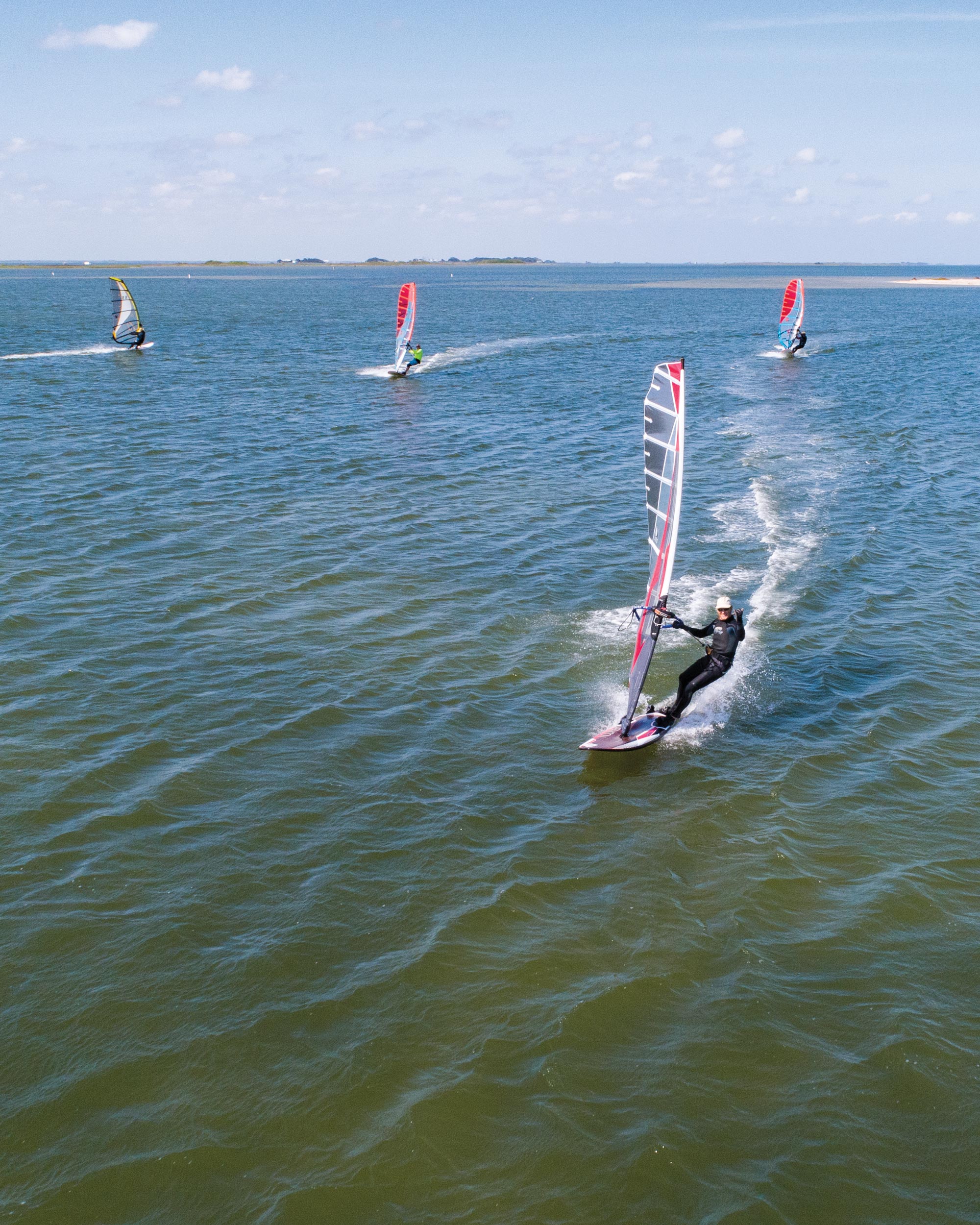 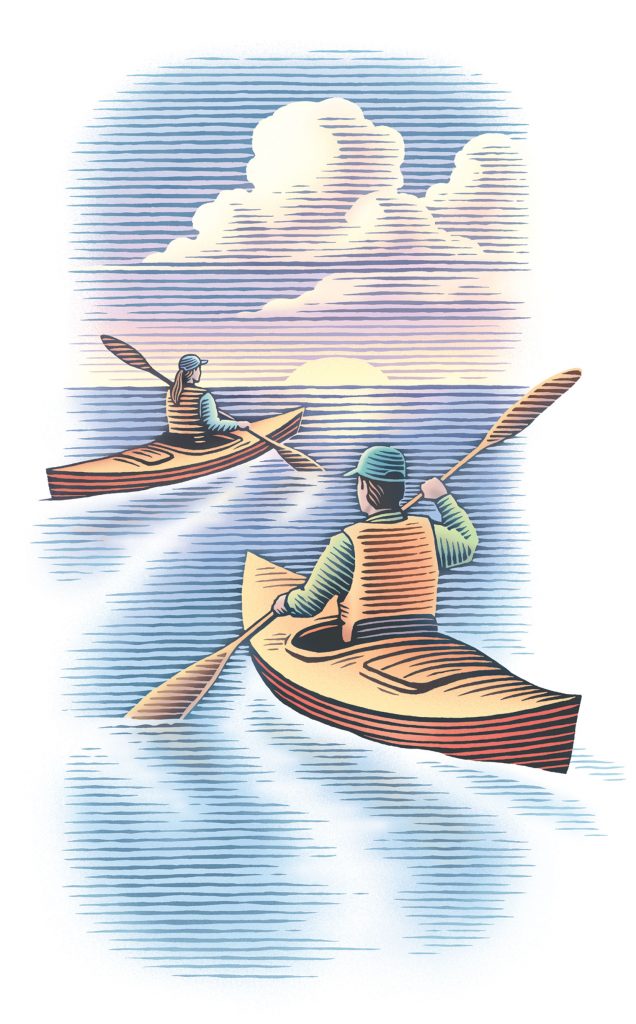 The shore around Baffin is lightly populated with a scattering of several low-key fishing lodges and motels, an RV park, the landmark King’s Inn restaurant, some Airbnbs, and the county park where most boats launch. The construction of the Baffin Bay Rod and Gun Club, which opened in 2016, was a game changer, offering luxurious amenities for up to 21 guests including a swimming pool, open bar, and on-site chef.

They didn’t intend to be so highfalutin.’

Moffett, the first female fly-fishing guide on the Texas coast, and one of the first to guide in kayaks, achieved celebrity status when she was based in Rockport, appearing on ESPN, NBC, and CNN and other national media, and writing the book, Saltwater Kayak Fishing, The Texas Way. Shallow saltwater fishing enthusiasts knew Black as the monster trout whisperer, having landed more than 120 speckled seatrout longer than 30 inches.

The couple merged their guiding services in 2009 and married the next year, setting up shop in a funky geodesic dome with an upstairs platform to accommodate five overnight guests, and five more guests in the garage.

On April 30, 2014, the dome caught fire and burned to the ground. Rather than take the insurance money and run, the couple decided to go large, living 28 months in a travel trailer while constructing the fishing destination of Black’s dreams. As for Moffett, Black says, she was “crazy enough to go along with me.”

By going long and large, the lodge became the only Texas destination offering fishing and wing-hunting to receive a prestigious endorsement from Orvis Fly Fishing Outfitters. “It’s not how many fish you put in the box,” Black says. “It’s everything else. It’s all about the hospitality. The fishing takes care of itself.” 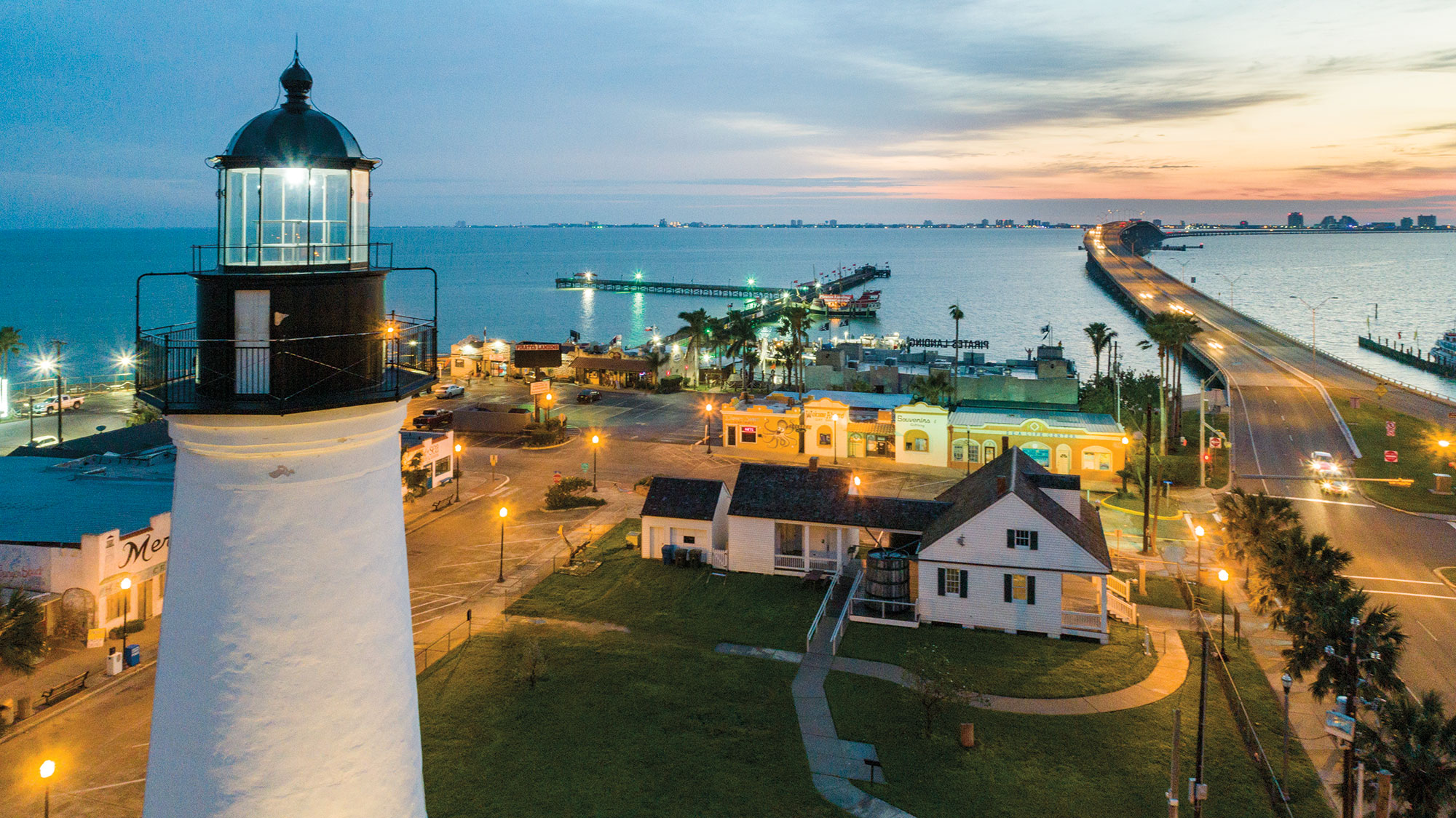 The boat passes through Roloff’s Cut and Hap’s Cut, dependable channels in otherwise shallow parts of the laguna, on our way to Nine Mile Hole, 35 miles south of Corpus. At the hole, we tool around, looking for places where the captains can take clients. Black and Moffett spot schools of fish where I just see chop in the surface. It pays to be with someone who knows what they’re looking at.

Back in Baffin, we explore its extension into Alazon Bay, with nary a boat in sight. Hundreds of pelicans, blue heron, ibis, sandhill cranes, seagulls, and all kinds of ducks—14 species in all, Moffett says—congregate on the sandbars and in the shallows.

Watching the Laguna Madre recede behind us as we head back toward land, a sense of calm washes over me. We’d been out where nobody else was, one of those rare places where cell phones don’t work and the wildlife is noisier and more abundant than the humans who come to see them.

It feels like the middle of nowhere, here in the cradle of the Mother Lagoon, or the middle of everywhere if the goal is to get away from it all.