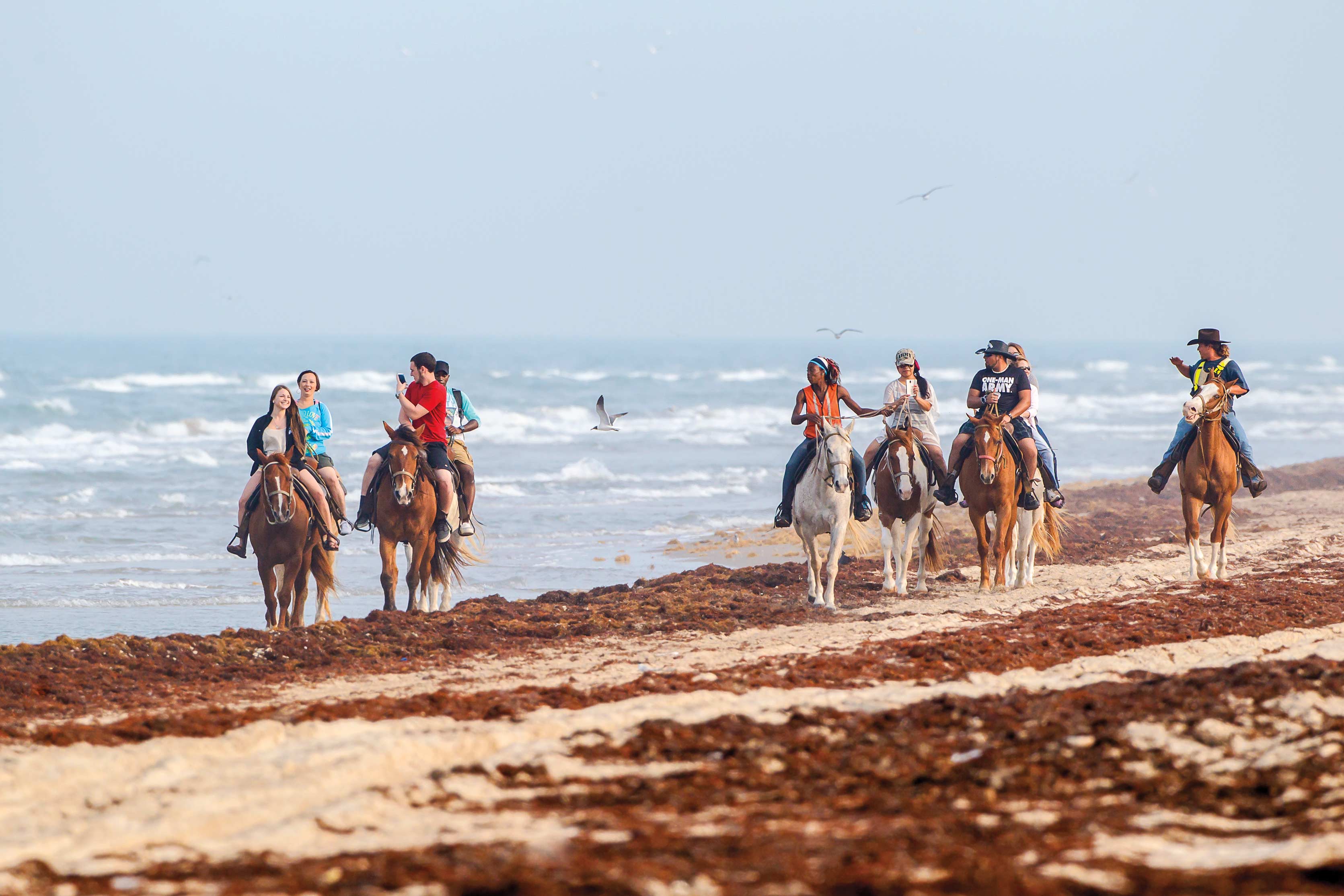 I get my first clear view of South Padre Island from the summit of the Queen Isabella Memorial Causeway. At 85 feet above Laguna Madre, the bridge reveals the island stretching majestically on a north-south line, like a thin ribbon of sand floating in a cobalt sea.

State Park Road 100 spans about 13 miles from the Queen Isabella Memorial Causeway to its terminus on South Padre Island.

To the south I can see the jetties and the ship channel cutting through to Brownsville and Boca Chica Beach. Tracking north, South Padre’s sweep of beachfront hotels and high-rise condos give way to white dunes that eventually disappear in the island haze.

That’s where I’m heading today as I descend from the bridge onto South Padre Island to explore State Park Road 100, known in town as Ocean Boulevard. The island’s main artery, 100 starts on the west side of the Queen Isabella Memorial Causeway and runs about 13 miles to its end among the dunes. The route may have the most varied real estate of any short road in Texas: Ritzy homes and condos occupy the south end in the heart of town; at the north end, coyotes, ghost crabs, and pelicans inhabit a remote moonscape of dunes.

Before venturing north, I pull into Blackbeards’ Restaurant, which opened as a burger shack in 1978 and has since expanded four times into a sprawling restaurant. Though Blackbeards’ is now known mostly for seafood, I opt for the half-pound hamburger with guacamole and onion rings. USA Today once ranked Blackbeards’ burgers among the 10 best in America. Trust me, that ranking is well deserved.

After lunch, I head north another mile and a half to Sea Turtle Inc., an open-air rescue facility dedicated to rehabilitating injured sea turtles and educating the public about these endangered creatures. Ila Loetscher, aka The Turtle Lady, launched the nonprofit in 1977 in her backyard before moving it to a bigger space in 1999.  For years she received contributions in the mail addressed simply to “The Turtle Lady—SPI, TX.”

Here the organization rescues all types of sea turtles, says employee Sanjuana Zavala, “about 400 a year beached for various reasons,” such as shark-bite injuries to their fins. Most of the rescues are Kemp’s ridley turtles, an endangered species that lays thousands of eggs annually on Padre Island. When possible, staff members nurse the turtles back to health and release them into the ocean. But some insist on returning: One turtle was released three times well out to sea and yet three times found its way back.
Visitors can take self-guided tours of the 25,000- and 40,000-gallon sea turtle tanks and observe daily “Turtle Talks” in the 300-seat amphitheater.

Today, though, I’m bound for the end of State Park Road 100 and head ever northward into a shallow canyon of dunes. Glittering white in the bright sun, the dunes tower as high as 40 feet above me. Kids love to climb and roll down these dunes, over and over, until they look like they’ve been heavily sprinkled with flour.

I park the car and climb to the top of a dune for a view. With strong gusts sweeping over the hills, I lean into the wind and stuff my cap in my back pocket. To the east, dozens of anglers cast into the waves of the gulf. To the west, three kite boarders surf Laguna Madre, their red and yellow “power kites” billowing brilliantly against the blue waters. Kite boarders and kite surfers say South Padre Island is one of the best places in the country to find consistently strong winds.

To the east, dozens of anglers cast into the gulf. To the west, kite boarders surf the bay, their “power kites” billowing brilliantly against the blue waters.

I slide down a sand chute from the top of the dune and head north again. As I take it slow on the four remaining miles of Park Road 100, I watch front-end loaders toil in their Sisyphean struggle against the sand and wind. I can’t help but think of my own variation of Robert Frost’s Mending Wall poem: “Something in sand that doesn’t love a road.”

A Texas Department of Transportation crew clears sand from Park Road 100 every day, says Bill Taitague, a maintenance technician. After Hurricane Gilbert 30 years ago, “it took us more than four months to clear the road,” he says. “The sand was 4 and 5 feet deep for 4 or 5 miles.”

Gene Paull, a retired geoscience professor at the University of Texas Rio Grande Valley, adds, “If it weren’t for the railroad vines and other types of dune vegetation, the dunes would just migrate across the island and disappear into the bay.”

Venturing north for the final two miles of Park Road 100, I can see the ocean intermittently between the enormous dunes. The surf is up. Boiling white foam crashes onto the sandy beach, and sea mist rises into the clear air. I pass the South Padre Island Adventure Park, a generator-powered business with zip-line towers and horseback riding on the beach. 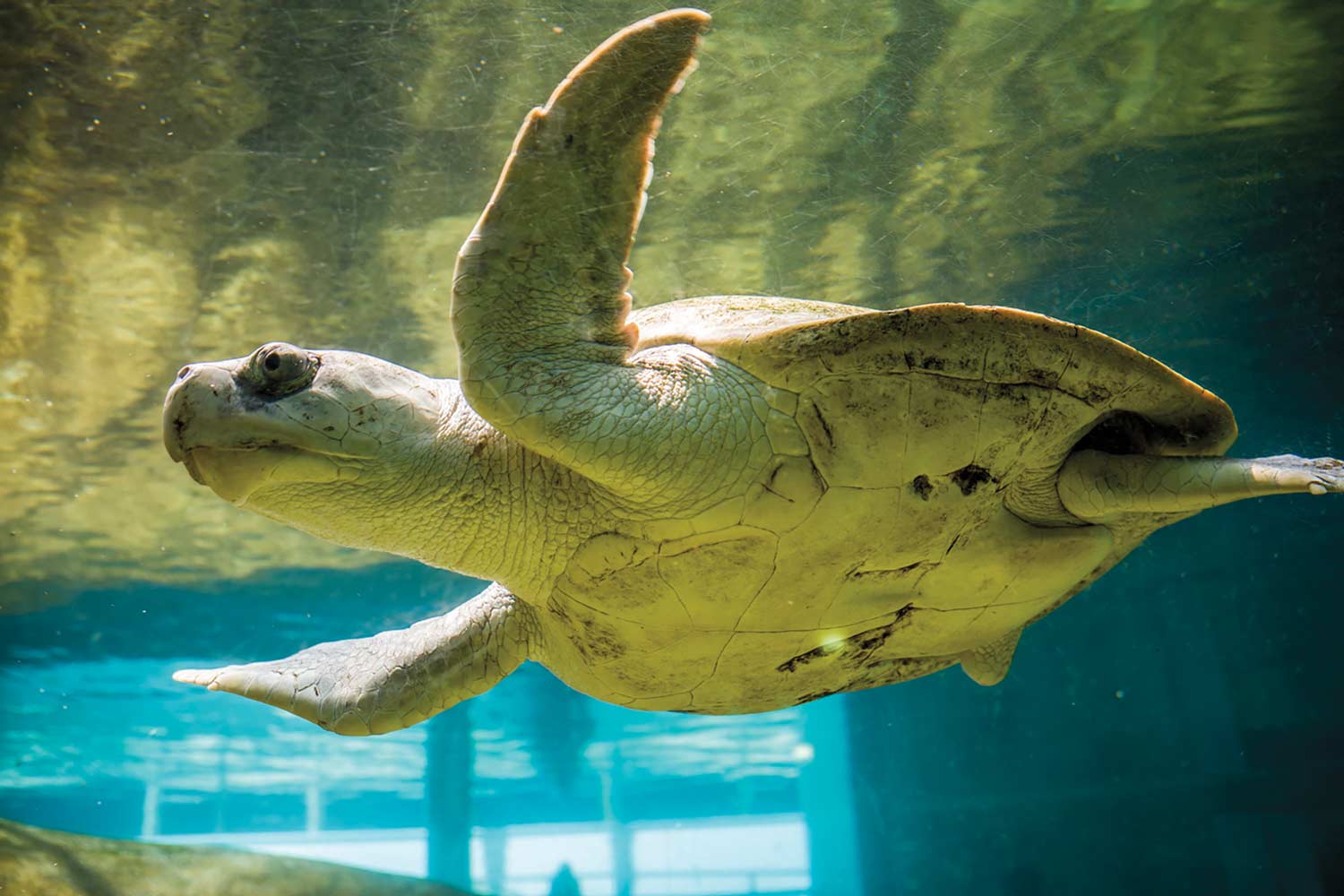 A Kemp’s ridley like those at Sea Turtle Inc. Photo: Kenny Braun

Reaching the end of Park Road 100, I park and look north at the tracks continuing through the sand. (The beach continues another 20 miles to the Port Mansfield Channel; four-wheel drive vehicles are recommended.) It’s hard to believe in this sandy world that Padre José Nicolás Ballí, the island’s namesake, and other ranchers grazed large herds of cattle here in the early 1800s.

About 100 years after that, in 1926, World War I veteran and railroad developer Col. Sam Robertson rallied local businessmen to join him in the construction of an “Ocean Side Highway” all the way up Padre Island. “We can have 150 miles of the most beautiful highway in the world,” he urged the Rio Grande Valley Commercial Club.

While Robertson’s idea proved to be impractical at the time—and likely still is—he was definitely on to something. The 13 miles of State Park Road 100 make up one of the most memorable drives in Texas.