Beavers are the unsung heroes of Texas’ wetlands 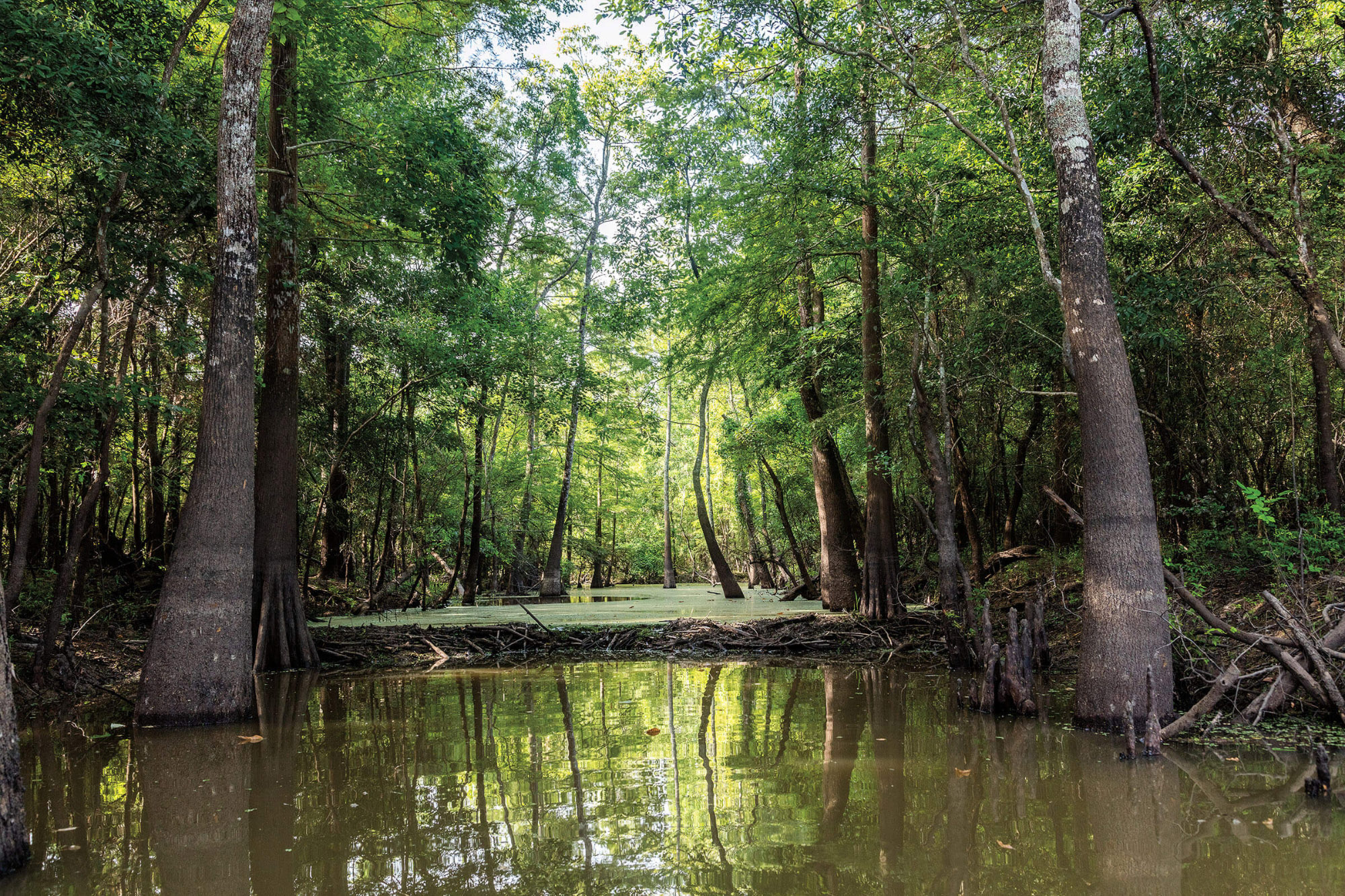 East Texas’ swampy wetlands and biodiversity wouldn’t exist without beavers. The 25-to-70-pound rodents build dams to stay safe from predators and create a home to call their own, inadvertently shifting the landscape and constructing wetland habitats where diverse plants and animals thrive (see illustration). Ancestors of the modern-day rodent, with its sharp orange front teeth and scaly tail, are thought to have first arrived in what is now the U.S. about 7.5 million years ago. Until the 1600s, hundreds of millions of beavers built dams across the country. These constructions diverted water from streams across large landscapes, including much of Texas, creating vital habitat for waterfowl, amphibians, and other living things. Then, starting in the 1600s, fur trappers caused the North American beaver population to dwindle to near extinction.

Restoration efforts begun in the 1900s have recovered some of their population, but without beavers’ maintenance work for centuries, coupled with human alterations of the landscape, America’s wetlands couldn’t function as they used to. Beavers even once made homes in arid areas near the Rio Grande and its tributaries, supplying the surrounding land with fresh water and shaping the local environment. That’s because beavers are what scientists call a “keystone species”—an animal that engineers an ecosystem to the point that, if it disappears, the habitat they formed may disappear as well. For this reason, Native Americans called beavers “sacred centers” of the land.

While beavers create habitat for many species, their dams can also come at a cost. Flooding the wrong areas can damage crops, like pecan orchards, or roadways, according to Michael J. Bodenchuk, the Texas state director for the USDA Animal and Plant Health Inspection Service’s Wildlife Services, which handles complaints about beavers. “Ninety-nine percent of the beavers in Texas don’t do anything wrong,” he says, acknowledging that most of what beavers do is beneficial. “There are few animals that modify their habitats like humans and beavers do.”

Where to See Beaver Activity

East Texas is prime beaver-viewing habitat, as they build and maintain dams along streams to help form the area’s signature wetlands. North of Dallas, Beaver Pond Paddling Trail in the Lewisville Lake Environmental Learning Area is a good spot to see evidence of beavers at work maintaining their habitat. The mile-long trail includes interpretive signage and views of herons, egrets, ducks, turtles, frogs, deer, and other wildlife.

After nearly going extinct due to the 200-year fur trade, beavers now protect the wetland habitat crucial to many threatened and endangered species’ survival. 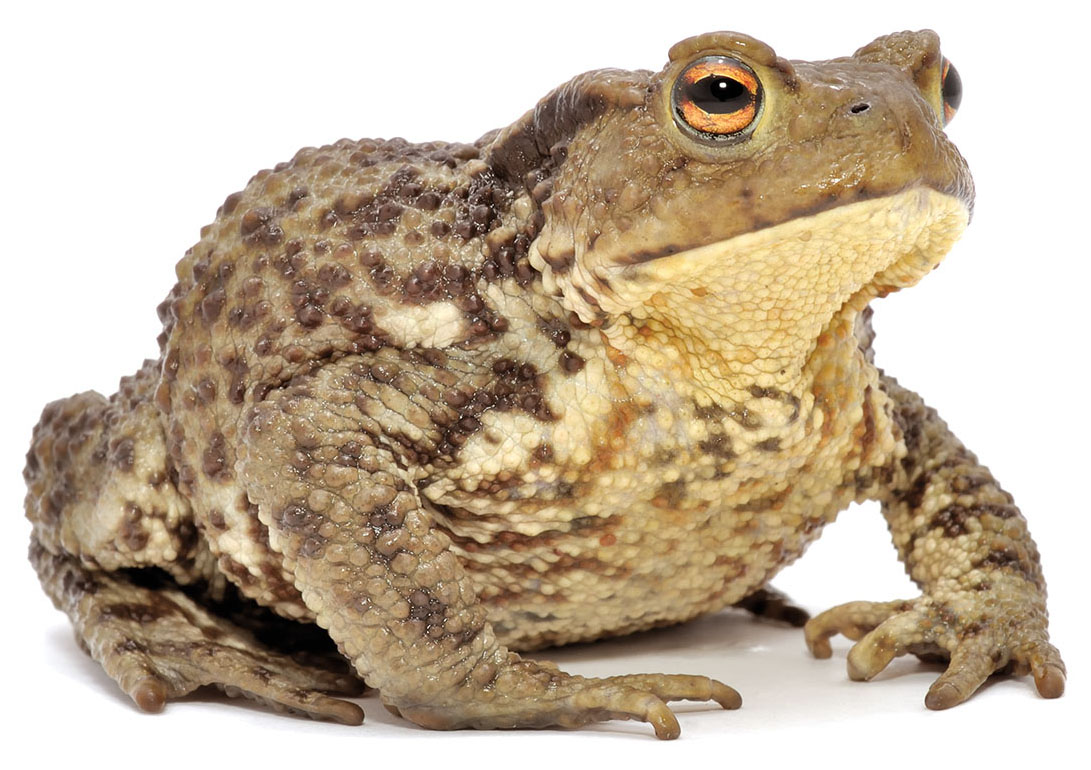 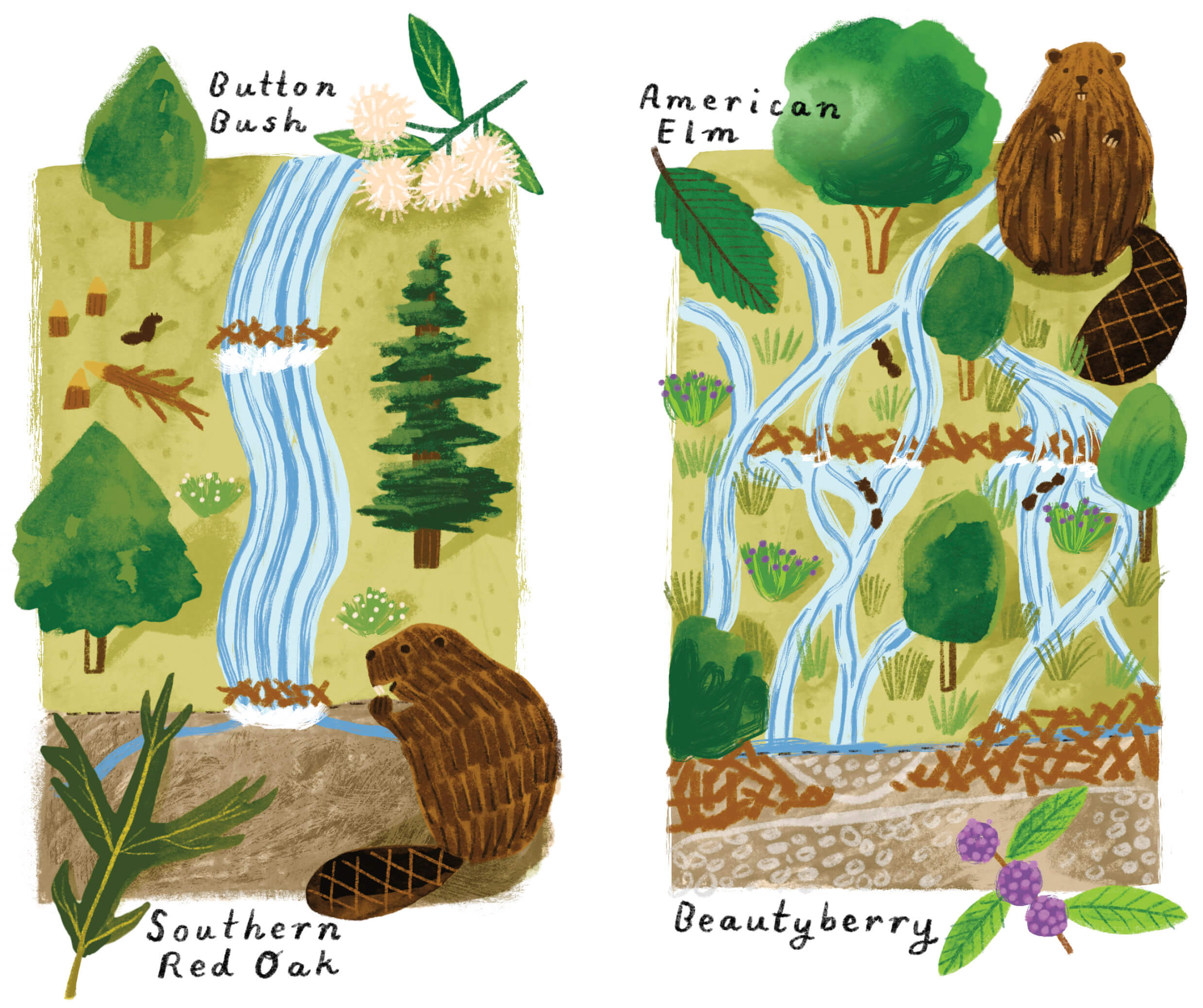 Beavers build dams using logs, twigs, mud, and plants along rivers and streams, creating a pond where new plants and animals can thrive. Once a dam bursts, grassy wetlands form, creating even more habitat for wildlife. Illustrations by Katie Vernon

Michael J. Bodenchuk, the Hondo-based state director for the USDA Animal and Plant Health Inspection Service’s Wildlife Services, has been working with beavers since 1977. As a self-proclaimed fan of the rodent, much of Bodenchuk’s job has been promoting harmony between humans and beavers.

Beavers were nearly absent from the state after the fur traders came through. How are there so many now?
This is actually a pretty good conservation success story. Beavers were extirpated by the time settlers came through and the Hudson’s Bay Company was formed around trapping beavers. The state started reintroducing beavers in 1950, and there are now more beavers today than there have ever been in Texas.

You said beavers mostly cause issues by flooding roadways.
Beavers will build based on the sound of running water. When they start a dam, wherever it trickles is going to be the lowest spot, and wherever they hear that noise they’ll patch it up. That’s part of the problem. With roadways, if they hear water rushing through a culvert, they want to plug the culvert up.

How do Texas’ beavers differ from those that live in colder climates?
Southern beavers with a lot of food availability don’t always follow the rules. Usually, a beaver colony is an adult breeding pair and last year’s offspring and the year before’s offspring. I’ve seen three breeding females working the same dam in the same colony. And the [stereotypical] lodge is the exception to the rule for southern beavers. They almost always have bank dams.

What are some nonlethal ways to deal with beaver activity like flooding and tree eating?
In Buda, developers had put in retention ponds in what used to be a farm area, and the beavers were building dams against the retention pond, which was threatening to flood. We installed flow-through structures as a demonstration project. You could build these yourself. You can take latex paint and mix sand in it—as much sand as it will hold—and paint the base of the tree. When a beaver goes to chew on that, the sand will get in their teeth. You can also put a few feet of chicken wire up to stop them from getting at your trees.