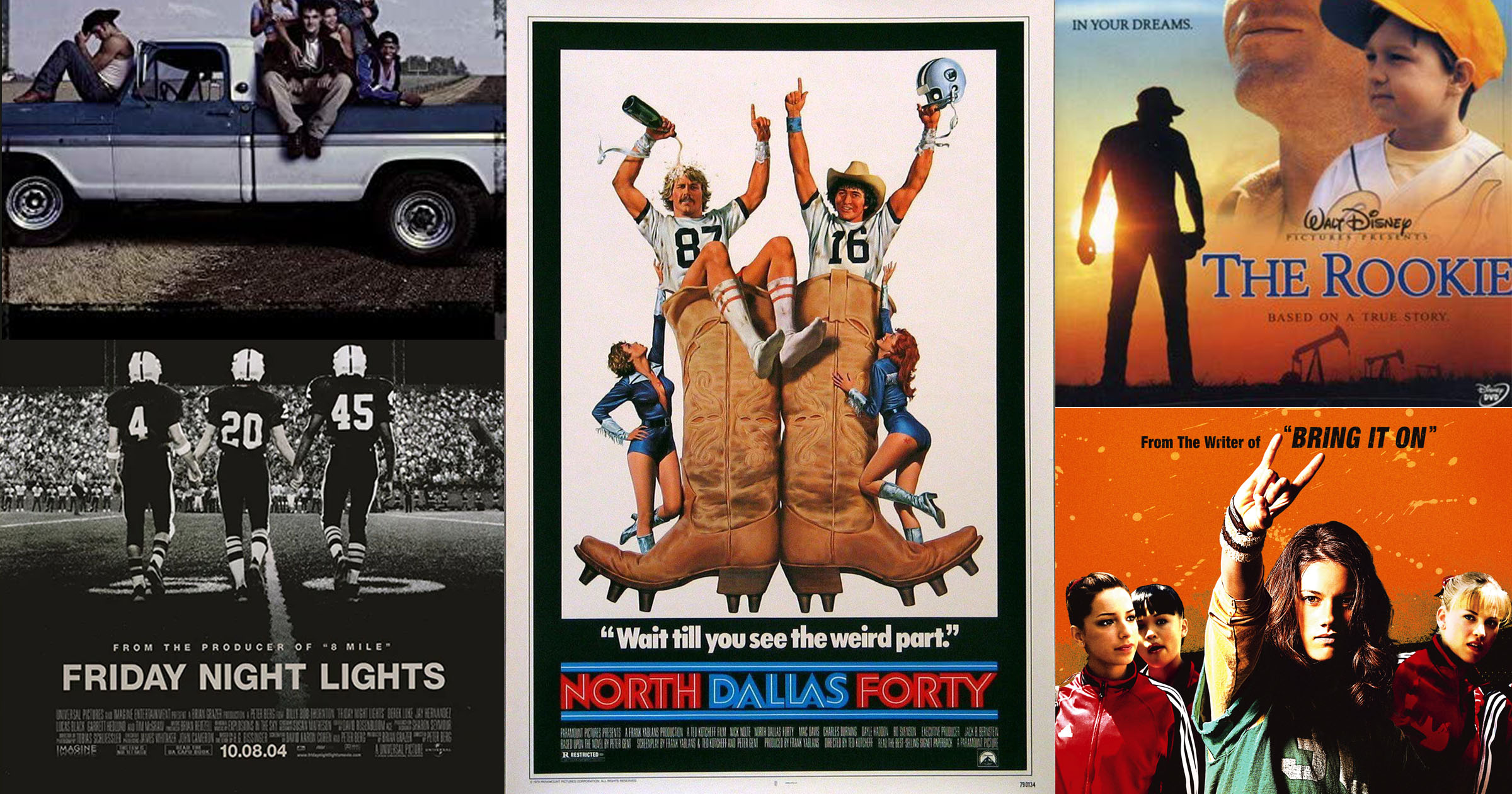 It’s a well-known fact that Texans are passionate about sports. From larger-than-life personalities to sensational backstories to famous come-from-behind wins, sports in the Lone Star State are particularly well suited for film adaptations.

Just when you think all the good stories have been told, a whole new slate of films based on Texas sport legends are in development. These include a new McConaughey movie about the Dallas Sting soccer team, the first American soccer team to win a major international tournament; an A24 film about Dallas wrestling family the Von Erichs, starring Zac Efron; and a big-screen adaptation of Humberto G. Garcia’s book Mustang Miracle, a true story about five Mexican-American golf caddies from San Felipe High School in Del Rio who went on to win the Texas State High School Golf Championship in 1957.

With high school and college football season upon us—and while you await the release of these new movies—here are several sports films based in Texas we believe are worth revisiting, plus some underappreciated picks.

No list of sports movies could possibly be complete without Friday Night Lights. The real-life story of the Permian Panthers captivated audiences first in H.G. Bissinger’s 1990 book. Fourteen years later, the film adaptation came out. Written and directed by Deepwater Horizon’s Peter Berg, the film stays true to the story of Odessa’s high school football team and their difficult journey to the state championships. The film captures the love Texans have for football, demonstrating how the hopes and dreams of a small town can rest heavily on the shoulders of young players. Two years after the release of the film, the TV series debuted to critical acclaim, with Kyle Chandler as Coach Taylor and Connie Britton as his tough-as-nails wife, Tami.

Though the TV series ran for five seasons and may have been more popular, the film laid the groundwork for its iconic status in pop culture with a careful balance of real-life grit and drama that’ll keep you on the edge of your seat.

Part sports drama, part cynical comedy, North Dallas Forty is more interested in the behind-the-scenes of football than it is in the typical underdog story. Based on the 1973 novel of the same name by Peter Gent, the film follows Phil Elliott (Nick Nolte), a wide receiver for the North Dallas Bulls pro football team (a close match for the Dallas Cowboys). Though the aging Elliott is an excellent player, he sustains his career through the use of painkillers and frequently parties with other players while their coaches look the other way. The film portrays the debauched world of professional football in the 1970s and balances entertaining storytelling with a brutally realistic depiction of the era.

If you’re looking for more of a feel-good watch, try The Rookie. Houston native Dennis Quaid stars as Jim Morris, a high school science teacher and baseball coach who lives with his family in Big Lake, after an injury takes away his dreams of playing Major League Baseball. In a simple game of catch with one of his players after practice one day, Morris throws a fastball, and the team urges him to try out again. They agree that Morris will give his professional career another shot if they make state playoffs—and then they do. Morris attends a tryout for the Tampa Bay Devil Rays, and is offered another chance at a major league career. The film is based on the true story of Morris, and was filmed almost entirely in Texas.

Not a gymnastics fan? Oh boy, you’re missing out. According to Vice magazine, there is only one great sports movie about gymnastics and that is the comedy-drama Stick It. The directorial debut of Bring It On writer Jessica Bendinger, the film stars Missy Peregrym as rebellious ex-gymnast Haley Graham, who is ordered to return to competitive gymnastics after destroying a construction site in Plano. She’s forced to train with the legendary coach Burt Vickerman (Jeff Bridges) in Houston, and with his help, Graham makes her return to competition—and puts her own bold spin on it. Full of grit, sass, and unexpected charm, the film gives audiences an entertaining look into the world of Texas gymnastics and all the drama that comes with it.

A small town where football is more lifestyle than sport, an injured star player, and big dreams—sound familiar? Though Varsity Blues may share some plot points with Friday Night Lights, the former takes the standard underdog tale in a different direction. Jonathan “Mox” Moxon (James Van Der Beek, who recently moved his family to Lake Travis in 2020 after falling in love with the Lone Star State while making this movie) is a backup quarterback for the West Canaan High School Coyotes and dreams of escaping his small town for Brown University. When the brutal philosophy of their coach (Jon Voight) results in the injury of their star quarterback, Mox must lead the team to victory in the district championship while fighting back against his coach’s abuse. Though the film follows the typical trajectory of a sports movie, there’s a deeper theme simmering below the surface—maybe there’s more to life than football.

While not a particularly subversive sports film, Necessary Roughness is a goofy, endearing watch. After the Texas State Armadillos are punished for NCAA violations, having all of their coaches and all but one player banned from the team, their new head coach Ed Gennero (Héctor Elizondo) must put together a new team or have the football program scrapped by Dean Phillip Elias. Though Elias tries to sabotage them by preventing many of the good athletes from joining due to poor academic standing, Generro pieces together 17 players for the team, including a 34-year-old former high school star, a women’s soccer player, and a graduate teaching assistant. Fun fact: Necessary Roughness takes place at Texas State University, which at the time was a fictional school. There was no college called that until 2003, when Southwest Texas State University changed its name.

Based on the true story of the 1966 NCAA Division Championship, Glory Road follows the Texas Western Miners, the first basketball team in the NCAA with a starting lineup composed of black players. Coach Don Haskins (Josh Lucas) must assemble a national championship team, but lacks the funding to bring in polished players. The team ends up having five white and seven black players, which draws the attention of racist fans who try to demoralize the team. Despite the hatred they receive, the players work hard to prove themselves and make a run for the NCAA finals. A triumphant underdog tale about the historic team, the film won the 2006 ESPY Award for Best Sports Movie and was nominated for the Humanitas Prize.

The directorial debut of Drew Barrymore, Whip It sets a heartwarming coming-of-age tale in the gritty world of roller derby. Bored of small town life in the fictional Texas town of Bodeen, shy teenager Bliss Cavendar (Elliot Page) is introduced to the sport when she attends a derby in Austin with a friend. Cavendar tries out and gets the derby name “Babe Ruthless” from her teammates on the Hurl Scouts. Her participation in the team drives her to display more courage in her personal life while the Hurl Scouts slowly improve in time for a championship match with their rivals, the Holy Rollers. The film was nominated for several awards, including the Women Film Critics Circle Awards and the Dorian. Some scenes in Whip It were filmed in Austin, and the screenplay was written by former Austinite Shauna Cross, who based it on the city’s roller derby scene.

Written and directed by Richard Linklater, Everybody Wants Some!! is a cheerfully relaxed comedy and an informal successor to the Texan filmmaker’s 1993 film Dazed and Confused. The film, set in the summer of 1980, follows the antics of a Texas college baseball team. (Linklater’s own experience playing college ball served as the foundation for the story.)  Enjoying their last weekend before the start of college classes, the team spends their time drinking, attempting to pick up girls, and occasionally playing baseball. In the classic Linklater style, the film spends most of its time enjoying its vivid characters and the nostalgic setting rather than rushing them into an action-packed plot. After all, these are the best years of their lives, their chance to spend a little more time playing baseball and having fun before facing the real world. As the tagline for the movie reminds its viewers, Everybody Wants Some!! is “here for a good time, not a long time”—and it sure is a good time.