In the 1930s, when megawatt stations like XER popped up along the border, listeners couldn't get enough of the mind readers 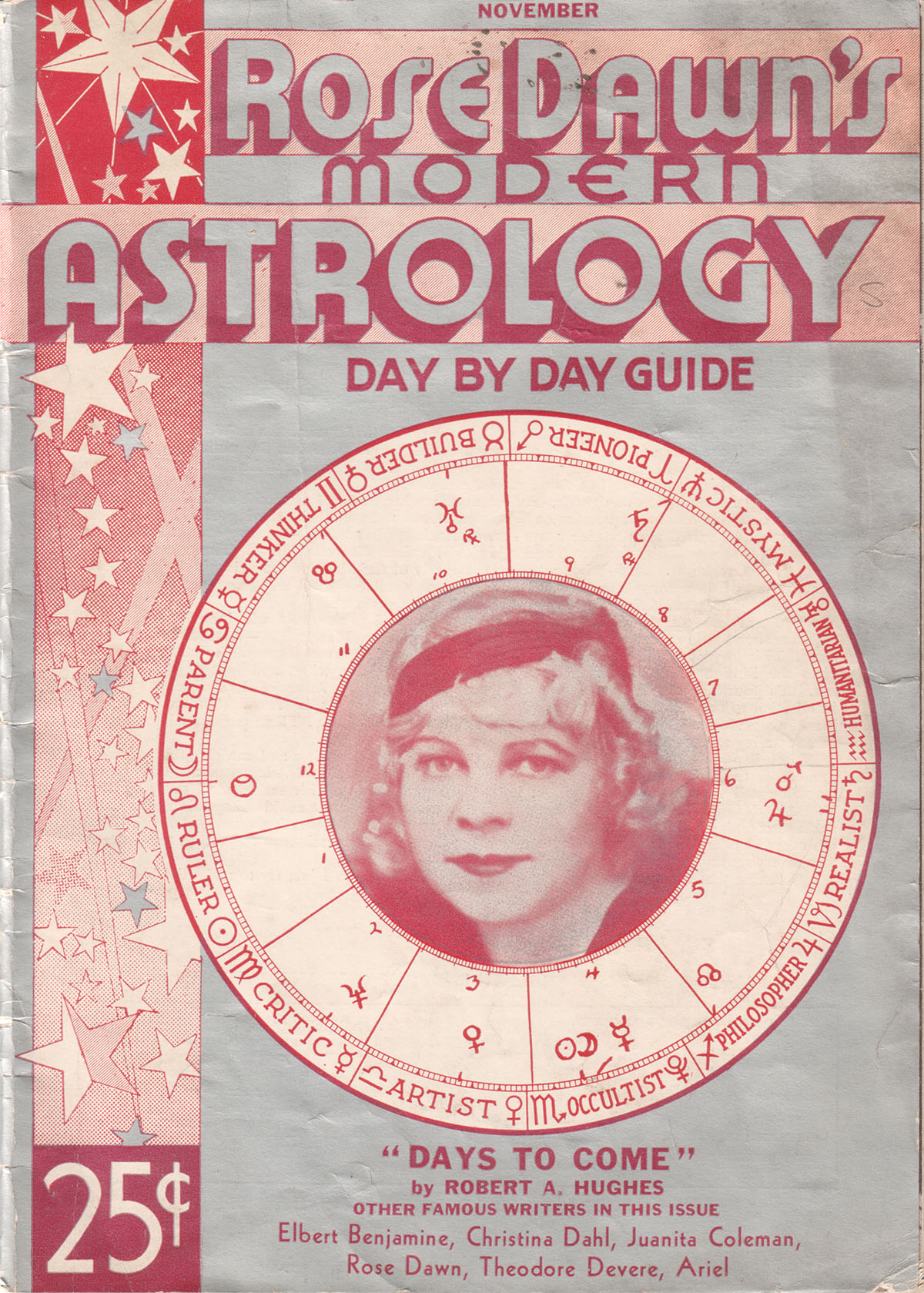 The borderlands between Texas and Mexico have always been steeped in mystery and romance. Despite the fact that most residents on both sides of the Rio Grande are simply hard-working, regular folks, a thick layer of frontier myth has encrusted la frontera pretty much from the time when human beings first laid eyes on the great river.

On occasion, the region has even lived up to its legend. In the 1930s, for instance, psychics, mentalists, and fortunetellers flocked to the border. Some of the mind readers and clairvoyants came because they had been forced off of radio stations in Texas and other states. Others arrived to take advantage of the vast audience available on the fabled mostly American-funded radio stations that set up megawatt transmitters just south of the Rio Grande on Mexican soil. A new book, Radio Psychics, by Georgetown-based author John Benedict Buescher, who is also co-director of the International Association for the Preservation of Spiritualist and Occult Periodicals, tells their colorful stories.

“When psychics and station owners were forced out of the U.S., they were free of FCC restrictions on stations’ maximum power restrictions,” Buescher explained in a recent interview. “As a result, the stations they built straddling the Texas-Mexico border were deliberately designed to blast out their broadcasts at unheard-of levels of power that covered the entire continent of North America, with the Rio Grande [region] of Texas being ground zero of that explosion.”

Some of the radio psychics went by names like “Marjah, the Famous Mystic,” or “Dr. Mel-Roy, the Apostle of Mental Science.” Many donned turbans and other exotic attire. But even when they went by their more mundane real names, such as Gayle Norman, who broadcast on XEPN out of Piedras Negras, Mexico, and Eagle Pass, the “spooks,” as they were called, impacted the South Texas landscape as well as American culture. According to a 1930s edition of the long-defunct Eagle Pass Daily Guide, the Maverick County hamlet of Normandy was named for Gayle Norman. And, oh yeah, they also hauled in buckets and buckets of dinero.

Two of the most famous radio psychics were a married couple, “Rose Dawn” (real name, Isabelle Coutant Taylor) and “Koran” (William Perry Taylor). The Taylors arrived in Del Rio in 1933 to perform on XER. Known later as XERA, this was the Villa Acuña radio station of Dr. John R. Brinkley, who had become world famous during the Roaring Twenties for a rejuvenation procedure he called the “Goat Gland Proposition.”

Born in Ohio in 1897, Koran, “the Master Mind of the Ages and Supernatural Soothsayer,” had a background in vaudeville mentalism and mind reading when he hit the border. He had often engaged in the somewhat popular psychic stunt of “blindfolded driving” an automobile. Rose Dawn, an Indiana native also born in 1897, had a varied showbiz resume that included opera and jazz singing. On XERA she became known as the “Star Girl” and began publishing a nationally distributed astrology magazine in Del Rio. My late friend Dallas Turner, a pitchman, metaphysician, and singing cowboy on the border radio stations, once told me that when his father lost a cow on their Nevada ranch, he wrote to Rose Dawn and, via her radio program, she told him where to find the animal. 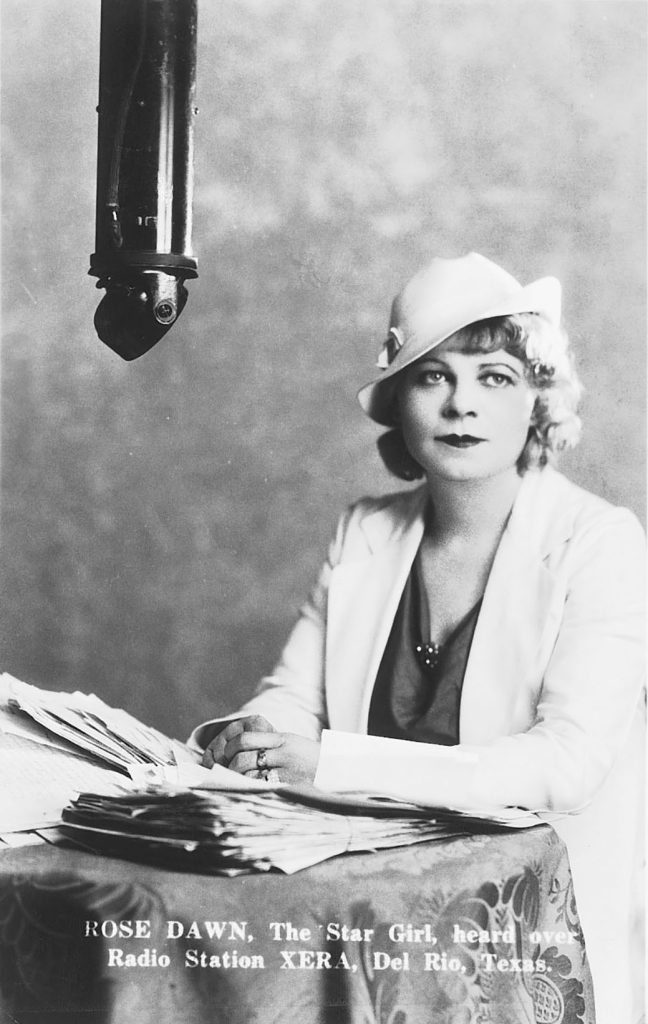 I was already familiar with Rose Dawn and Koran, having researched the couple for my book Border Radio. I found a Time magazine article, which Buescher cites in his book, that described Rose as “a blondined uplifter.” A Del Rioan who worked in her letter-answering factory recalled, decades later, that she resembled Mae West and would come in once a day to ask, “What’s the take?” (It was usually several thousand dollars.) Another Del Rioan who worked at her and Koran’s home recalled that “people from Hollywood” frequently trekked to the border city to party with the glamorous mystics.

Viewed nearly a century later, Rose Dawn seems to have made a slightly greater impact than her husband. “What interests me most about her,” Buescher said, “is how she could convince listeners that they could trust her, but also to believe she had access to cosmic secrets about them.”

Mentalism historian Diego Domingo, to whom Buescher dedicated Radio Psychics, unearthed vintage audio of Rose Dawn in the National Archives. (On that same research trip, Domingo was in the Library of Congress on the morning of Sept. 11, 2001. He went into the building before the World Trade Center attacks, and when he came out, the world was going crazy.) The recording had been made by U.S. communications authorities, who kept tabs on the border psychics and worked tirelessly to get them off the air. Though she spoke of spiritual enlightenment, Rose Dawn sounded like a gal who didn’t suffer fools as she hawked her book, The Miracle Power.

While living in Del Rio, Rose and Koran ventured far south into Mexico, ostensibly gathering arcane information on the ancient and advanced Mayan civilization. Back on the border, they founded a radio-and-mail-order metaphysical self-help business called the Mayan Order. A booklet the couple published in 1936, The Revelation Secret of the Mayans of Del Rio, Texas, offered a syncretic blend of wisdom from many of the world’s great religions and authors. Cleverly marketed to help readers get more out of life, including moola, it also provided a quick summary of Mayan advancements in medicine, economics, literature, spirituality, and more. The booklet invited initiates to subscribe to Mayan Order lessons for $2 a month.

In 1938, writes Buescher, the Taylors purchased a ranch in Bandera and named it the “Mayan Dude Ranch.” The mystics “decorated its rolling landscape with a few tributes to Mayan stone structures,” and while the dude ranch continues to host guests today under the same name, the Mayan iconography is apparently long gone. In a 1939 ad in the Del Rio Evening News, the radio psychics invited Val Verde County folks to attend the Bandera County Rodeo at their ranch.

The Taylors moved the Mayan Order operation to San Antonio in 1941, where they purchased a home owned by the English-born conjoined twins Daisy and Violet Hilton, who had become famous as sideshow and vaudeville figures. The San Antonio Express reported that the large house of “Oriental-Colonial architecture” featured “Egyptian lily ponds” and “fountains and statues from China.”

In the early 1950s, the Taylors sponsored an archaeological expedition by respected Mayanist Frans Blom. The project investigated some ruins near the Moxviquil Mountains and unearthed, among other items, ceramic burial urns of Mayan nobles. Back in San Antonio, a large red electric sign that read “MAYAN ORDER” stood on Fredericksburg Road, marking the business’ continuation by Mayan Order members for many years after the couple’s deaths in 1953 and 1964.

When asked how he got interested in radio performers like the Taylors, Buescher recalled his days organizing and directing the Voice of America’s Tibetan Broadcast Service from 1990 to 2007. “I thought a lot about how radio connects the person behind the mic with listeners, no matter how far away they are,” he said. “I don’t mean the technological side, but the mental side. It seems like telepathy, like a psychic connection. When commercial radio began, many people found it uncanny, and when I looked into that early period of broadcasting, I found a surprising number of professional mind readers and fortunetellers who exploited that weird aura around the radio to convince listeners that their psychic powers were genuine.”

One of the most fascinating aspects of the performative metaphysics explored by Buescher concerns the psychics’ perspective on the then-still-new medium of radio. The electronic mass communication gizmo still seemed magical to many people, and Dr. Mel-Roy (who also lived in San Antonio at some point) was one of many who played up that angle. In his pre-border station days, an ad for a 1928 series of appearances that ran in The Rusk Cherokeean, The Albany News, and other Texas newspapers, the touring vaudevillian advanced the theory that “mental telepathy or what is commonly known as mind-reading is merely an advanced step in the principles of radio.” The ad promised that Mel-Roy would “demonstrate his unique claim” onstage, in a display known as “Human Radio attuned to a mysterious Unknown.”

Want more radio psychics? Writer Gene Fowler and Bill Crawford will play an excerpt of the Rose Dawn recording during their live webcast, Border Radio: A Nuevo Vaudeville Documentary Performance, at the Allen Public Library Civic Auditorium at 7:30 p.m. on May 12. Log on here.