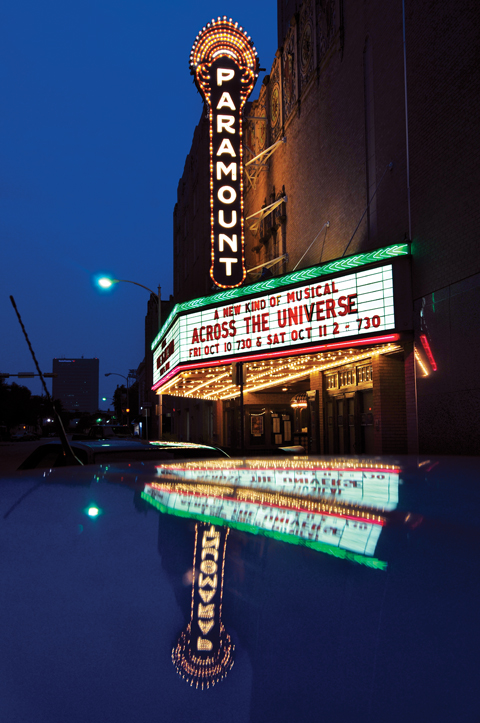 Built in 1930 and restored in 1986, the Paramount now hosts movies, theater performances and live music. Photo by J . Griffis Smit

September—when the autumnal equinox brings an official end to summer and temperatures start to cool, ever so slightly at first—is my favorite time to visit Abilene. Here, on the broad plains that once nurtured vast herds of buffalo, the shifting light bathes the urban landscape in a warm glow—the handsome brick buildings that rose downtown in the early 20th Century in the wake of the railroad’s arrival; the homes in the historic Sayles District, built by affluent merchants and bankers as wealth spread beyond the city’s core; and certainly the many restaurants, museums, and shops that now attract visitors to a destination that touted itself in 1881 as a “Future Great City of West Texas.”

Seasonal fluctuations aside, I visited last fall to learn what other changes were afoot in Abilene.

Perhaps no creatures here are as sensitive to nature’ s preamble to fall than the animals that live at the Abilene Zoo. And thanks to a recent expansion here, visitors have more than 160 species to study in spacious habitats. The monkeys and lemurs pace their play throughout the day now, the black rhinos leave their cooling mud pit to show off their impressive horns, and the black bears—grunting and scratching themselves without concern for etiquette—curiously investigate their human onlookers. Even the giraffes—inquisitive year round—gallop friskily to a suspended walkway designed so that visitors can view them (and feed them) eye-to-eye. But the pair of African lions-a well-muscled male named Botswana and a female called Saba-inspired the most intrigue on my fall visit. As Saba pounced and prowled like an athletic, 450-pound housecat, Botswana—his mane lush and shaggy—staked out a high spot where he could survey his surroundings, and let out a resonating roar that sparked both fear and wonder. “We’re hoping the two will breed,” says Liz Kellerman, the zoo’s mammal supervisor. “He’s calling out to learn if there are other females in the area, and also to let it be known that this is his territory.”

The gregarious Terry Browder is also tuned into cycles of change. A former quilt dealer who got to know West Texas through his travels as a title abstractor, Browder watched area tourism increase with the 2004 opening of downtown’s Frontier Texas, a multimedia museum showcasing the 1780-1880 Texas frontier. Browder soon traded his plat books for a guest roster at the Sayles Ranch Guesthouses, a cozy compound of four rental houses he developed in the historic Sayles District. The largest guesthouse, a four-bedroom home that Browder decorated in what he calls a ”John Wayne at Starbucks” aesthetic (think leather sofas and hand-wrought mesquite beds, antler chandeliers and modern art), also has a private pool. Each guesthouse has its charms, though, from a sunny screened porch to an upstairs sleeping loft contracted in the 1920s by actor Joan Crawford’s father. (Nearly all the decor and artifacts have intriguing  stories, which Browder will share  with minimal arm-twisting.)

While all four Sayles properties have elegant and practical kitchens, Browder doesn’t serve food, like a traditional bed-and-breakfast does. ”We’re not zoned for that;’ he told my husband, Randy, and me, “but also, I know that when I travel, I don’t want to get dressed before breakfast.” Browder recommended a preemptive trip to McKay’s Bakery, a downtown sweet shop whose bestsellers include Italian cream cakes, poppyseed muffins, and divinely sticky, pecan-studded coffeecakes.

Abilene’s downtown area, a compact grid of streets lined with buildings that date to the 1900s, has much to offer year round, but especially so in September. Across from the restored 1910 Texas & Pacific Depot, the Grace Museum celebrates the 100th anniversary of its now-restored, Mission Revival building with an exhibition called Texas Art Seen (Sep. 26–Jan. 14), which will focus on early 20th-Century artists. The Center for Illustrated Children’s Literature hosts a groundbreaking show of oversize, Japanese pop-up books. A few blocks away, the restored Paramount Theatre, built in 1930 and on the National Register of Historic Places, continues its year-long film series with screenings of classics like 1954’s Oscar-winning Sabrina and the independent, coming-of-age, Sundance smash Son of Rambow. 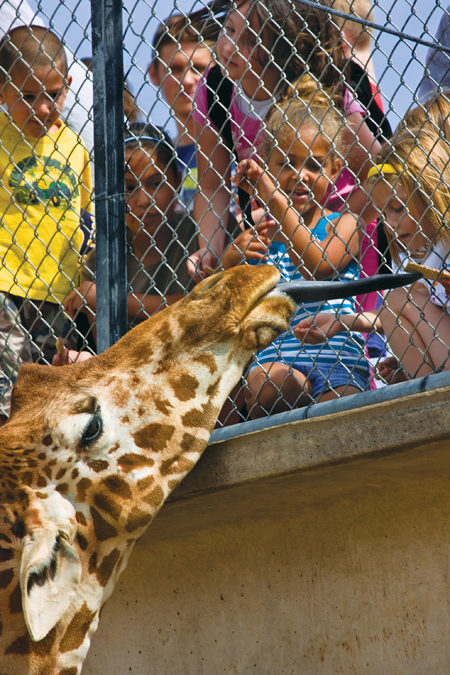 Abilene Zoo. And thanks to a recent expansion here, Visitors have more than 160 species to study in spacious habitats at the Abilene Zoo. Photo by J. Griffis Smith.

Restaurants in the historic district range from sandwich shops that cater to students at Abilene’s three universities to upscale eateries like Cypress Street Station, a white-tablecloth place where salads and pastas share menu space with entrées like seafood risotto. You’ll find more exotic fare–Thai, Japanese—on the West part of town, due to the international influences of Dyess Air Force Base. But thank goodness I’m not a vegetarian, as beef is king in this part of West Texas. That much hasn’t changed.

So, after our tour of downtown, we made tracks to Joe Allen’s Bar-B-Que, which forthree decades has served mesquite-smoked meats to a devoted customer base of wheat farmers, oil-industry types, military personnel, university professors, and electrical engineers from the area’s huge wind-power plants. Joe Allen’s is not the only barbecue restaurant in town; Allen’s ex-wife Sharon Riley puts her own spin on things at the nearby Lytle Land & Cattle Co., and a place called Harold’s draws fans for turnip greens and brisket.

But Joe Allen’s has a heartfelt, old-school appeal that inspires loyalty. A neon sign illuminates the parking lot, which is likely jammed with 4 x 4 trucks and fragrant with wood smoke. In the dining room hang a slightly askew collection of equestrian portraits and Western scenics—windmills, Longhorns, cactus-studded vistas, and racehorse profiles. Owner Joe Allen is also an avid horse breeder, and photos of his many winning Thoroughbreds hang in the foyer and bar area, the latter dedicated to Allen’s undefeated, six-year-old mare, Peppers Pride.

Randy and I had missed the earlier hubbub—cheering and rounds-all-around as patrons and employees tuned in to watch the horse win her record-breaking 19th consecutive North American race. Thankfully, we weren’t too late for dinner—heaping plates of smoked turkey and peppery sausage, plus half-cup servings of hammy pinto beans and cabbage with bacon.

“When the trainer pilots from over at Dyess come in,” says Allen, who favors a medium-rare ribeye, “about half get the steaks, half get the barbecue.”

Abilene, in fact, stakes much of its economy on the base. More than 6,000 military and civilian employees work here, and hatmaker Damon Albus would like to sell each of them a hat.

Albus, who started leatherworking in college as a way to fund his “bad habit of rodeoing,” later apprenticed with Lubbock hatmaker Dean Leonard and eventually returned to his hometown of Abilene to open 5-D Custom Hats and Leather. “People come in and say, ‘I’d wear a hat a lot more often if they just looked good on me,” says Albus. “And I tell ’em, ‘You just haven’t had a hat that’s been creased right.’ There’s a hat person yearning to come out of everyone.”

I had brought Albus my grandfather’s old Stetson—a voluminous “cattleman’s with a mule kick”—and asked him if he could make it suit me. “There’s only so much I can do to make it smaller;’ he said, “but I can redo the crease and put in a snugger sweatband. And a braided hatband would give it a feminine touch.”

Afterward, I couldn’t help but smile at that crumpled old hat, reborn with a dash of Abilene flair. How’s that for a change?