Absent Since 2009, Piggly Wiggly Stores Are Reappearing in East Texas

The grocery store, a first-of-its-kind shop when it opened in 1916, has new locations in Athens and Paris 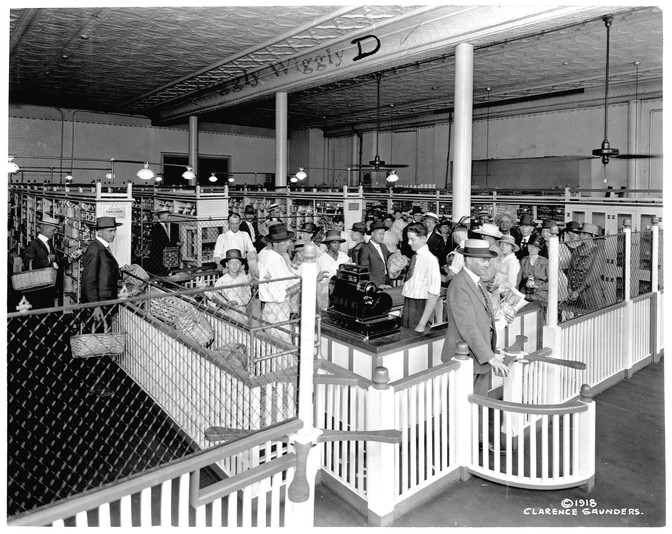 Shopping at the original Piggly Wiggly in Memphis, Tennessee, which opened in 1916.

The excitement rises with the temperature on a sunny June morning in the East Texas town of Athens. Though it’s been doing business for a few weeks, the local Piggly Wiggly is having its official grand opening. A Blue Bell ice cream truck sits in the parking lot as a man wheels cases filled with half-gallon containers into the store. Under a canopy near the entrance, children try out a side-by-side basketball shooting game. Workers stock a nearby concession trailer with wieners and buns.

When the main doors slide apart, a little before the advertised 8 a.m. opening, a bottleneck forms near the entrance. Shopping carts advance slowly, bumper-to-bumper, into the produce department, where the specials include fresh jalapeños and leaves from prickly pear cactus (good for grilling and salads). Two of the shoppers, Jimmy and Sherry Mitchell of Athens, arrived at 7 a.m. Years ago they shopped at a Piggly Wiggly in Denton, which was reportedly among the last in the state to close in 2009.

“Piggly Wiggly was our store,” Sherry says. “And now they’re back!”

The iconic small-town supermarket chain made its first reappearance in Texas this spring in Paris. The Athens store is the second to open, and there are plans for new locations in Texarkana and Sherman. The parent company of the chain since 2003—C&S Wholesale Grocers of New Hampshire—declined comment, noting the new locations are independently owned franchises. So we don’t know if more stores may be in the works. But even with only two currently up and running in Texas, folks are excited.

For people of a certain generation, the Piggly Wiggly brand offers plenty of nostalgia along with stocked shelves. There is something about Mr. Pig, the friendly looking porker in the white hat and apron, emblazoned on the store’s banners, displays, and even merchandise such as hoodies and golf balls—that seems to make people happy. To paraphrase one of the chain’s slogans, they dig the pig.

Over a century ago, Piggly Wiggly was the opposite of nostalgia. It began in 1916 with entrepreneur Clarence Saunders’ hog-wild idea for a grocery store where customers walked around picking items right off the shelves rather than telling a counter-clerk what they wanted. That first location, in Memphis, Tennessee, disrupted the industry and arguably created the modern American supermarket. Locations spread so fast that by 1920 there were five in San Antonio alone.

Today, Stacey Rogers manages the new Athens location. She tells me it will be offering greater variety than the Save A Lot store that previously occupied the space, which she also managed. And the variety extends beyond the items on the shelves. One customer has already asked for canned whole chicken. Though it wasn’t in stock, Rogers special ordered it for her.

It’s an important service because, like supermarkets you might remember from childhood, Rogers’ store has a modest footprint by today’s standards. You won’t overload your digital step counter going from parking lot to produce to frozen foods. But in an age of big-box stores, hypermarkets, and e-commerce, this offers something increasingly scarce—grocery shopping on a human scale.

As a chain Piggly Wiggly also seems to be staying true to its, er, hooves by sticking to smaller cities and towns. Don’t expect one in Houston or Dallas soon. But more than a decade after vanishing from Texas, the chain’s slogan, “Down Home, Down the Street,” once again holds true for a small and growing number of people in the state.