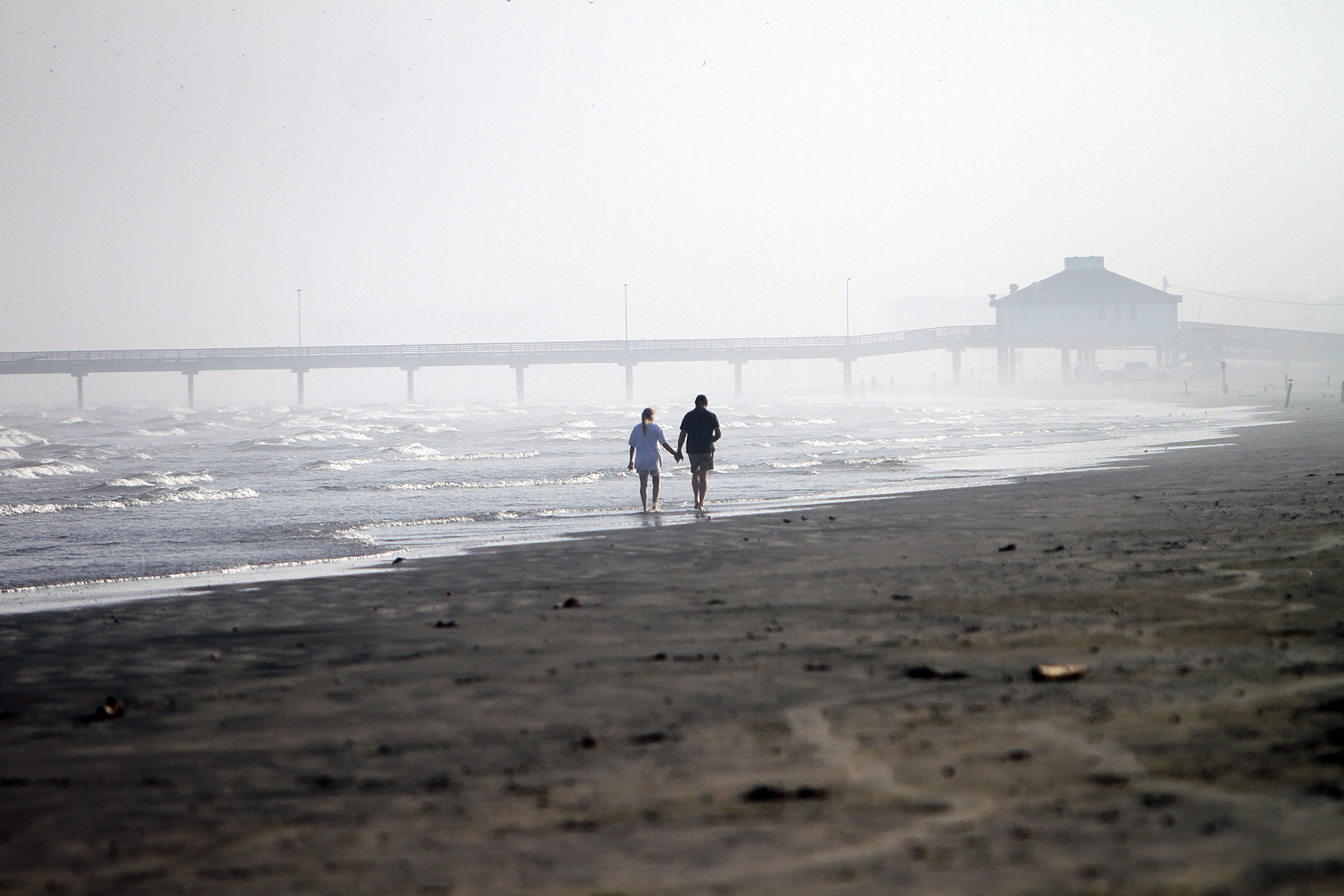 Hurricane Harvey invaded Port Aransas less than three years ago with the subtlety of a neutron bomb, wasting neighborhoods, destroying beloved venues and wrecking its close-knit citizens’ lives. Port A’s well-documented comeback led Tiana Worsham, chef and co-owner of The Phoenix Restaurant, to conclude this past winter, “Okay, we are going to make it.”

Then, in creeped COVID-19. It didn’t forestall 2020 spring-breakers, but it punished Port A’s tourist economy in weeks thereafter. “In some ways, the pandemic is more stressful than Harvey,” said Mary Henkel Judson, publisher of Port Aransas South Jetty News. “We don’t know when it will end. At least with Harvey, it came and went, and we knew what we were dealing with.”

Though some of the government restrictions were eased as May approached, April was, as poet T. S. Eliot wrote, “the cruelest month.”  The tweaks at the local level and the promises by Governor Greg Abbott of more loosening to come, including opening the state’s beaches, brought Port A optimism to the surface, no different than post-Harvey, but, as Judson said later, “This is a moving target, for sure.”

Texas Highways Magazine readers met Judson, Worsham and others in the June 2018 edition that described the challenges and aspirations of Harvey’s survivors. Speaking recently, they agreed with Worsham about the virus: “This is just a kick in the teeth.”

A headline in the April 2 edition of the South Jetty announced the city’s response to COVID-19 concerns: “Restrictions Designed to Reduce Tourism.” The newspaper listed measures like no camping or sunbathing on beaches—only walking, running, and biking—and no fishing in the surf, from the piers or along the jetty. Transient RVs were ordered to leave. Short-term rentals, whether in hotels or third-party options like Airbnb, were prohibited unless the customer claimed the stay was due to “essential business.” Thus, occupancy in tourism-centric Port A shrunk to under an estimated 10 percent by late April (for comparison, in April 2017, occupancy was at about 70 percent)  Shorty’s, the town’s oldest bar, closed until further notice.

The measures didn’t “make sense to those having a conniption fit because they can’t hang out at the beach unless they are exercising, or they can’t go fishing in the manner they prefer,” wrote Judson in South Jetty’s April 4 edition. But, she added, “Follow the %@g* rules!” 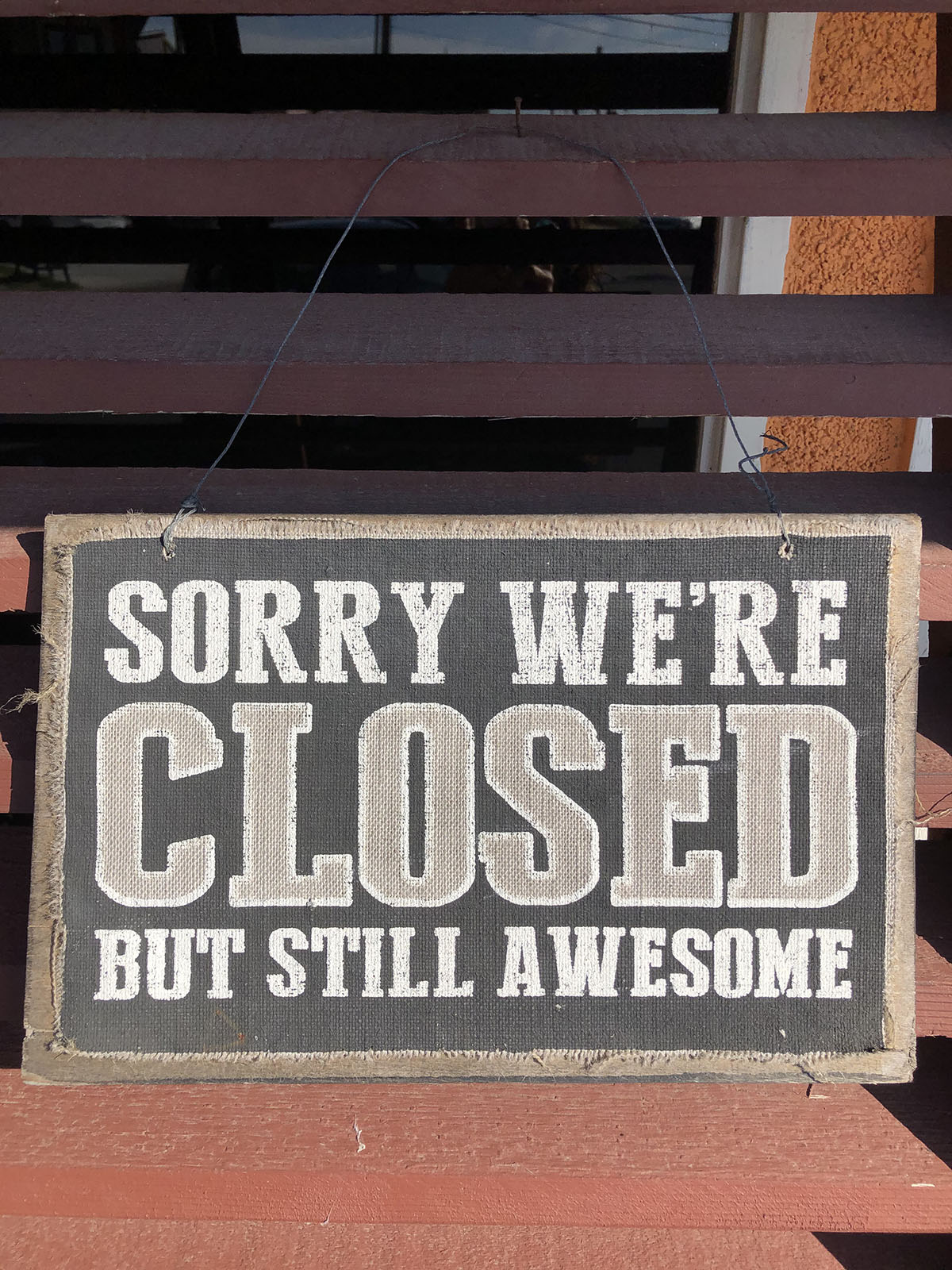 Following the rules, Farley Boat Work—a living history museum dedicated to Port A’s wooden boat industry—was “completely shut down to visitors, volunteers, and boatbuilding,” Manager Dan Pecore said. He added that April’s annual Wooden Boat Festival is postponed until the fall and work on restoration of a 19th-century scow schooner, a multiyear project, has been discontinued.

“It’s some kind of lonely here,” he said.

Posted after COVID-induced state and local constraints were announced, a sign outside another Port A institution, Venetian Hot Plate, read, “Sorry We’re Closed But Still Awesome.”  The restaurant’s owner, Linda Halioua, was also profiled in the 2018 Harvey revival story with other Port A chefs at “The Commune,” the name they gave a multi-bedroom townhouse they occupied after they lost their own homes to the storm.

“I’m Italian and [relatives there have been] telling me what was happening,” she said in mid-April of her native country. Hot Plate closed March 23 prior to government edicts. “In Italy, you kind of have an example. You are already thinking the worse,” she added.

Halioua, who rebuilt Hot Plate after Harvey and whose husband Maurice succumbed to cancer years ago, said COVID restrictions first caused anxiety, sleeplessness, and weight loss. “So, I said to myself, ‘Why are you thinking like this?’ I’ve already been through everything. Now, I know I’m going to make it. I’m going to reopen.” 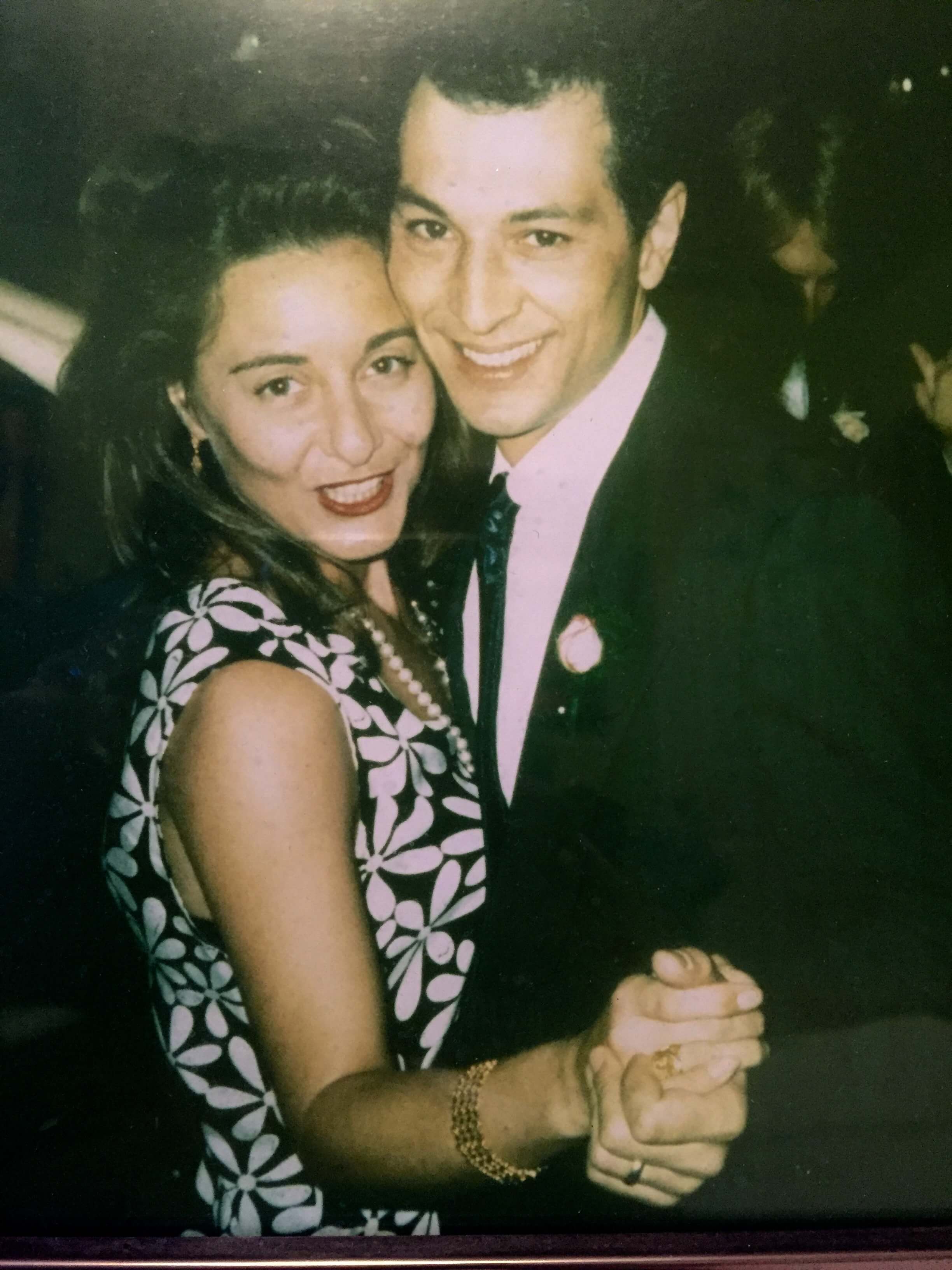 Linda Halioua and her late husband Maurice, who emigrated from Italy with her to help found Venetian Hot Plate. Photo courtesy Linda Halioua.

On April 21, that happened, sort of. Buoyed by a Small Business Administration loan and the approaching 25th anniversary of Hot Plate’s original launch, Halioua announced a new takeout service. “Through challenges big and small, hurricanes and pandemics, and spring break right-hand turns through traffic, we’re glad to be Port A Strong together,” she posted on Facebook.

Another former “commune” resident and Harvey veteran, Greg Villasana, owner of La Playa Mexican Grille, converted to takeout without closing, his combination seafood and Tex-Mex menu more suited to curbside service than fine dining. “We aren’t making half the money we used to make, but I’ve kept my employees,” he said.

Customers wanted margaritas with La Playa’s popular fajitas and seafood enchiladas, but Villasana said he was told by state authorities that alcohol for takeout had to be sold in original containers. La Playa’s solution: margarita kits of Patron Silver tequila and Grand Marnier liqueur that make up to five servings. Why premium brands? “We’ve got to keep our reputation up,” he chuckled.

If Harvey and COVID were a double whammy for most, Lee Roy Hoskins, owner of the historic Tarpon Inn, suffered a triple. He spent April recovering from a private plane crash near Dallas. Meanwhile, hotel manager Aimee Van Winkle took calls for summer reservations from home while the Inn was empty. “The big difference is with Harvey, I could see the end,” she said three weeks after officials announced initial regulations. “With this, we’re just sitting; we are just waiting. Our livelihoods are in their hands.”

So were the enterprises of Kelly and Beth Owens, including Deep Sea Headquarters’ fishing outfitting and excursions, three restaurants, golf cart rentals, a dolphin-watching ship, and the Red Dragon Pirate Cruise. “Never in a million years would we have thought that we would have another disaster less than three years apart,” Beth said in mid-April.

Beth’s challenges were threefold—the effect on the family business, her role as a Port Aransas City Council member, and her own bout with coronavirus, caught while on spring vacation. She and her family were self-quarantined while she recovered. Deep Sea closed and their restaurants converted to takeout. MacDaddy’s Family Kitchen staff volunteered to make grocery deliveries to shut-ins for the local IGA Family Center market.

Beth said she and her husband “built our businesses on faith, hard work and our employees, who we call our family and who worked so hard for our success. We are fighting for them to stay open.”

There have been some positives from the crisis though.

Cinnamon Shore, one of the newest mixed-use housing developments, reopened relatively soon after Harvey, incurring limited damage because its construction complied with the most recent hurricane-related codes. It’s current major expansion, along with property sales, hasn’t been interrupted by virus-related orders.

“Many of the owners have been here for some time, enjoying their homes with their families and staying for a while—no one knows how long,” said Cinnamon’s Jodi Peters, who added short-term renters converted to long-term. “Though times are tough, the sense of community and family are strong.”

Crime has been down for Police Chief Scott Burroughs’ force. Still in temporary headquarters since Harvey, Burroughs said of COVID enforcement: “When we encounter violators, usually all we have to do is ask them, ‘Do you want to be the one responsible for getting the beach shut down completely because you won’t follow the rules?’ That seems to put things into perspective for them.”

Another positive for Burroughs at the time of our conversation in mid-April – legal fishing off-shore on his day off, though outfitters like Woody’s Sports Center couldn’t sell bait. “Who needs live bait?” he said. “There is so little pressure on the fish right now, even I can catch them on plastics.”

COVID restrictions tested the administration of Mayor Charles Bujan, who strongly supported statewide shutdown rules and posed for a photo with his wife sporting face masks.  “Frankly, I’m tired of getting beat over the head with this stuff,” he said at an April 16 City Council meeting. At the time, the city had seven confirmed cases, the first of which were imported, and no deaths.

Discouraging Port A tourism made sense to at least one of Port A’s resident philosophers, Woody’s Sports Center owner Glenn Martin, who couldn’t operate his fishing charters and his dockside Back Porch Bar. “I kind of see the light at the end of the tunnel,” he said as May approached, though Woody’s was limited at the time to peddling marine fuel, mostly to law enforcement, and otherwise operating “like a convenience store.”

Martin was prescient because Bujan subsequently tweaked the local orders for the April 24-26 weekend to allow fishing charters, other off-shore excursions like dolphin watching,  live bait sales, and fishing from the jetty and shoreline as long as social distancing was practiced, masks were worn, and capacity was cut in half on the charters and excursion boats. He and Deep Sea Headquarters immediately announced the changes on Facebook—leading one user to respond: “Alright, Glenn, let’s rock and roll.”

Hot Plate and La Playa began preparations for reopening on-site dining in May, per Abbott’s indications that restaurants would be included in his next order. “We will do whatever he says we can do,” Villasana said. “But we will keep the health of our guests in mind to where we do a little more than we have to.”

Even so, Port A’s broader comeback from COVID awaits. “The main thing is not having the short-term rentals,” said Martin on April 23, referring to the ban the mayor didn’t remove when he authorized fishing for day-trippers. “It’s not wide open, but it’s better than it was 24 hours ago.”

Woody’s Sports Center facilities were pummeled by Harvey, and Martin’s condo at Cline’s Landing was destroyed. He nurtured Woody’s back to its former status as a Texas fisherman’s mecca. His future retirement home at Cline’s is yet to reopen, and he and his wife are still in a rental house. Nevertheless, like after Harvey, he is optimistic about the latest challenges:

“I think—probably I pray— once we get open, the people of Texas are going to have cabin fever so bad they are going to flock to Port A.”