Ahead of the 2022 Paralympics, Athletes With Texas Ties Discuss Their Journeys 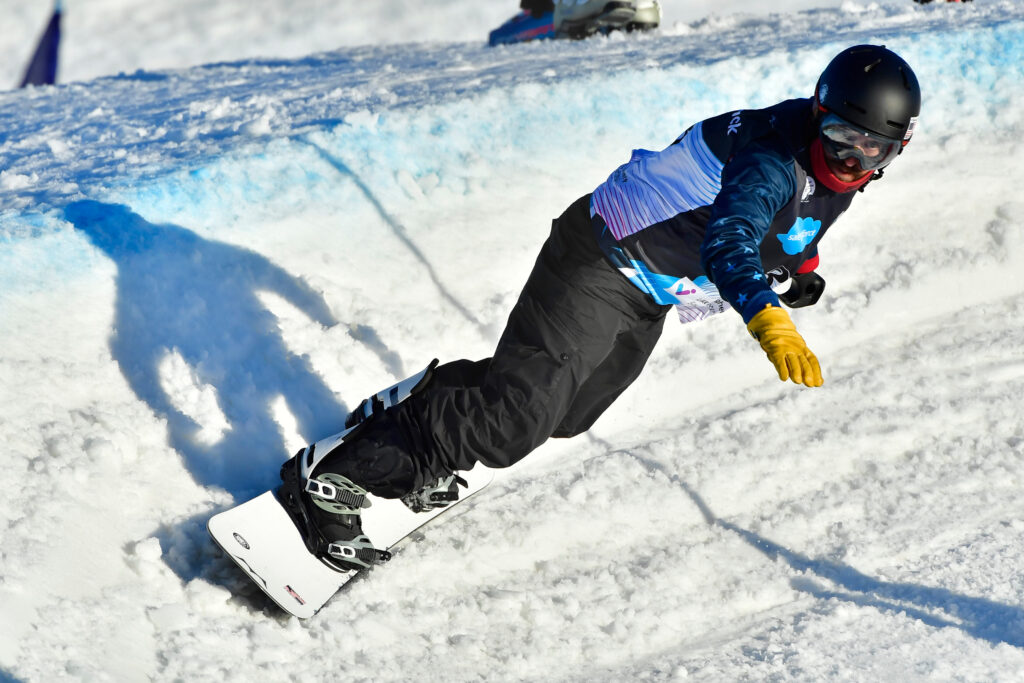 There were many narratives surrounding the 2022 Winter Olympics Games, but one that might have flown under the radar was the surprising success of Texas athletes at the games. Arlington native Sylvia Hoffman won bronze in the two-woman bobsled, McAllen-raised Katie Uhlaender finished sixth in women’s skeleton, and Ashley Cain-Gribble and Timothy LeDuc, who train together in Euless, finished in the top half of the pairs skating event. Not bad for a state where the average temperature in winter hovers around 65 degrees.

While the cauldron in Beijing was extinguished last month, the Olympic flame rises again Friday with the opening of the 2022 Winter Paralympics—and more athletes with ties to Texas are set to stand out on the world stage. Of the 67 members competing for Team USA in Beijing, three have called Texas home. Texas Highways caught up with Jen Lee, Josh Sweeney, and Michael Spivey to talk about their athletic journeys, the pride of representing their country, and how they got into their sports.

Spivey was born in North Carolina but moved to Abilene when he was about 6 months old. He lived there for 25 years before joining the Marines. While serving in Afghanistan in 2010, he was injured by an improvised explosive device and lost his left arm below his elbow. As part of his rehabilitation, he participated in many different activities, but it wasn’t until he drove from San Diego to Colorado in 2015 that he started committing himself to snowboarding. Three years later, he made the Paralympics squad for the 2018 Winter Olympics. He finished 18th in both the banked slalom and snowboardcross. An older competitor at 41 years old, Spivey missed making this year’s team about two weeks ago. But a day after finding out the news, he received another call: Because of his dedication to the sport and his success at the international level over the last few years, the coaches put in a petition for him and he was granted a spot on the team.

TH: What are your goals for Beijing?
MS: To do better than last time. I want to make it in the brackets. I’m shooting for top 10. I’d like to do better but I’m also a realist. Six or seven of the top 10 riders out of—not just my category but all the boardercross for the Paralympics—are in my category. I would love to get a medal. But like I said, I’m a realist, so I’m shooting for somewhere between fifth and 10th place. I want to race. I want to do as many races as possible. If I can make it all the way to the podium, that’s a bonus.

TH: What do you hope people see when they watch you compete?
MS: Throughout my entire life, there’s been like literally millions of reasons to quit, to stop, to just give up and not go on. Luckily, I’ve had a bunch of people in my life to support me and keep pushing me, to help me to achieve this stuff. I’d like them to see my ability to keep going, but I’d also like them to see my gratitude toward the people who have helped me to keep going.

The 2022 Winter Paralympics take place March 4-13, with five disciplines: alpine skiing, Nordic skiing (which includes biathlon and cross-country skiing), sled hockey, snowboarding, and wheelchair curling. All events can be streamed online at NBCOlympics.com, with 120 hours of coverage also being broadcast on TV.

TH: What does it mean to represent the U.S. at the Paralympics?
MS: It’s hard to describe. Whenever I think about it, I get choked up. It’s hard to put into words. It does make me happy. It fills me with a bunch of pride to wear that uniform for my country again. Basically, whenever I got injured, I was pretty much told that I wasn’t going to be able to be a [Marine] anymore. That hurt. That was heartbreaking because the Marine Corps was a major, major part of [my] life. So whenever I found snowboarding and found out there was potential to possibly represent my country—and then whenever they did tell me I was going to represent my country again—I don’t even know how to describe it. 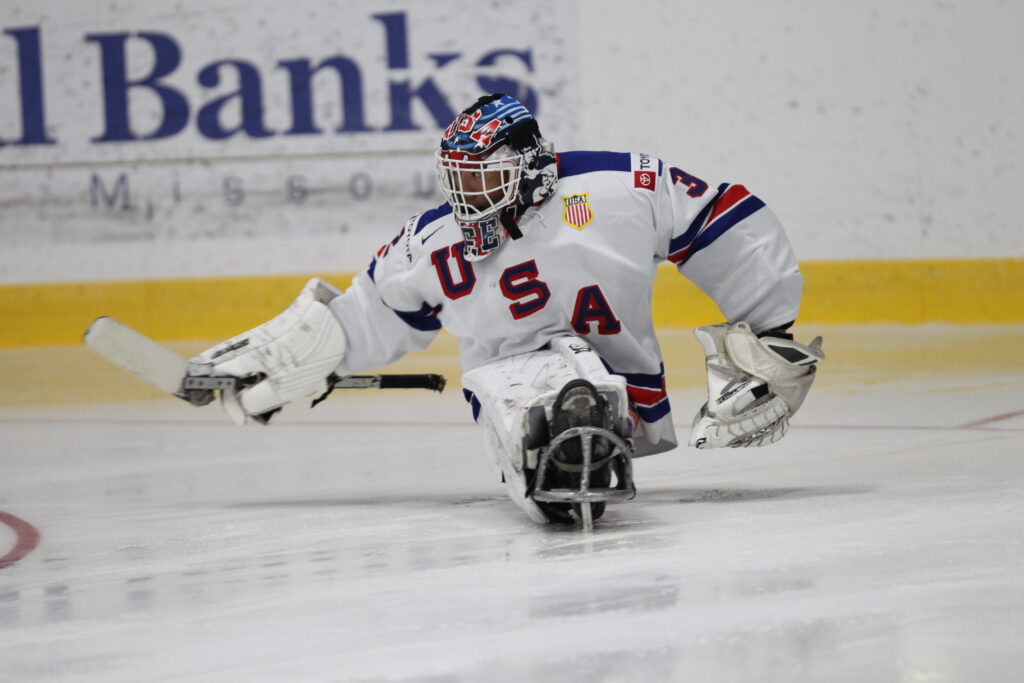 Born in Taiwan and raised in the Bay Area, Lee served in the U.S. Army until he had his left leg amputated after a motorcycle accident in 2009. For his recovery and rehabilitation, he moved to San Antonio, where he picked up sled hockey, playing with a team sponsored by the local organization Operation Comfort. An athlete in his youth, Lee took to the sport and made the U.S. national team soon after he started playing. He earned a spot on the Paralympic squads in 2014 and 2018 and won a gold medal both times. He has also won three gold medals at the world championships. In 2018, he graduated from the University of Texas at Austin with a degree in sports management, and he continues to live in the Alamo City. In his third Paralympics, Lee has a new role as the starting goalie. The U.S. has won the last three gold medals in the event.

TH: What was it like when you realized you could compete at this level?
JL: It was definitely a little bit hard to believe for sure, maybe crazy as well. I grew up watching the Olympics and had no idea at first what the Paralympics was. Disability was such a new thing for me. For them to say I have a good shot [of] making it and to continue to represent my country in a different way, it was one of those things that I knew was not going to be easy but definitely a new goal for me to try to attain.

TH: How did you end up becoming goalie for this year’s sled hockey team?
JL: I was the backup goalie. I had the opportunity—the honor—to watch my teammate, my brother, one of my best friends Steve Cash really dominate from the crease as the starting goalie. Last year, around September, he had to retire for personal reasons. Now I’m the starting goalie and will be playing more games. Unless something happens in Beijing, I’m the guy to fulfill that and just have to help my team to win every game.

TH: What does it mean to represent Texas?
JL: I always say that once my accident happened, that one chapter of my life closed and opened up another. I enlisted out of California—and just growing up in California until high school, that life was totally different, a totally different journey. Then when I joined the military, that itself was a different life and a different chapter. Then my new life, my post-injury life, started actually in San Antonio because that’s where my rehabilitation really began. I was getting one of the best medical treatments in the world down there in San Antonio. [It] had the friendliest people, who support military down there. It gave me another life, [a] new opportunity. 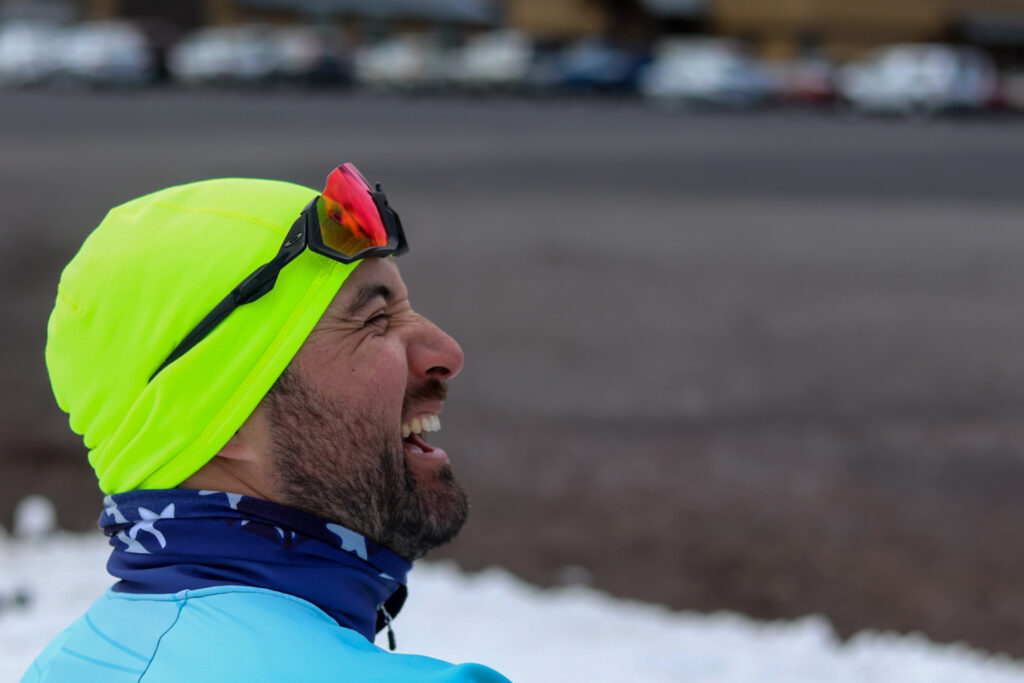 Sweeney first won a gold medal at the 2014 Winter Paralympics as a member of the sled hockey team. Like Jen Lee, he started in sled hockey after moving to San Antonio to receive treatment for an injury he sustained from an explosion while serving in Afghanistan in 2009. He played on the same club team as Lee and first made the national team in 2011. By 2014, he was a key contributor: In the gold medal match against Russia, in front of nearly 7,000 spectators, Sweeney scored the lone goal in a 1-0 U.S. victory. After moving to Boise, Idaho, where he currently lives with his wife and two children, he stopped playing sled hockey, but he still looked for ways to stay active, He took up paratriathlons, then picked up skiing 14 months ago, and earned a spot to compete in Beijing.

TH: You lived in Texas for about six years. Did you like it?
JS: Everybody honestly within Texas was super nice. If it wasn’t for family and other reasons, I probably would have just stayed there.

TH: How did you pick up skiing so quickly?
JS: Fortunately, it’s very similar to sled hockey in the motion and the muscles that you use. The biggest difference is just maneuvering. I really had to focus on that, but I was just lucky that a lot of the work that I’ve put in in hockey over the years could help me in this sport. So, I picked it up. I started skiing and fell in love with it and went to some races and realized I could be competitive.

TH: When you competed in the 2014 Winter Olympics, your children weren’t born yet. How excited are you that they will be able to see you compete this time around?
JS: I had to be in Bozeman for training for the last two weeks leading up to this, and every time I would FaceTime with them, they’d say, “Hey, are you gonna be on TV yet?” My son remembers being able to watch me play hockey. My daughter doesn’t. So it’ll be really exciting for them to both be able to watch me compete now and hopefully I’ll get some pictures of them watching TV, cheering for me.

TH: Is there anything you hope people can learn from your life?
JS: I didn’t really think about it too much until the other night when one of my [sled hockey] buddies sent me a message: “I just saw you’re going back to the games in Nordic skiing. I think it’s amazing that you aren’t afraid to draw outside the lines and get into new things and pursue different sports and things that you want to do. You’re not worried about letting go of the past or letting go of something that you’re good at.” That’s always what I’ve wanted. Whenever I talk to people, if they sound like they’re stuck in a rut or just not excited about whatever it is that they’re doing, it’s like, hey, there’s a lot out there. You don’t have to continue to do this. You could try something else. It’s hard to get outside of your comfort zone but I think if anyone can learn from my story, it’s that it’s always worth a try to see if it’s something that you want to pursue. If it’s not, that’s OK. At least you gave it your best shot.