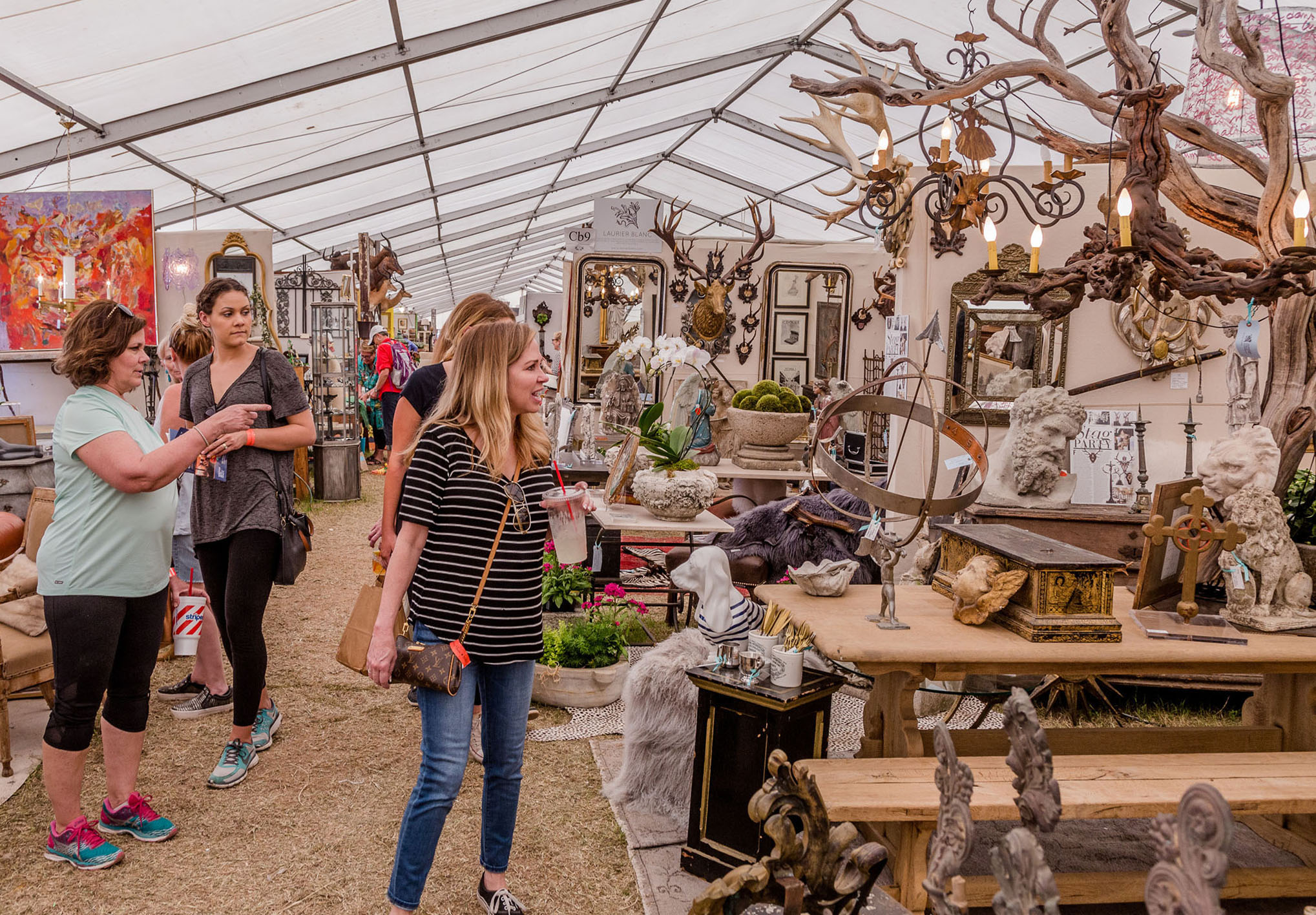 Antique shopping in Round Top. Photo by Will van Overbeek.

If you haven’t scoured the fields during one of Round Top’s miles-long, pastures-deep, overstuffed buying extravaganzas, well then, some may fairly scoff at your shopping chops. The massive biannual market has been taking place in this and surrounding towns for more than 50 years. And while it’s a misnomer to call it an antiques show these days, there are plenty of exquisite old things to be found, along with pricey Saarinen dining tables, Malian mud cloth, glasses of frosé, yard art, fine art, and handmade jewelry. If you’re a person who loves the hunt, the only question is… What does a newbie need to know?

“If you see something you love—buy it. It won’t be there when you come back.”

That’s according to my mom, Julia Coody, who has made the pilgrimage to Round Top from Tyler with her merry band of diehards for more than 30 years. She says the show—which runs now through April 3—has changed a lot since the old days, when antiques were all the rage, bargains abounded, the stretch of State Highway 237 between Brenham and LaGrange wasn’t plagued by citified traffic problems, and prices weren’t as, well, pricey.

“We used to complain that everything was a minimum of $100,” she says. Now, everything she wants is “triple that,” and midcentury modern has replaced primitive pine in many of the venues.

Some things—like fickle Texas weather and the benefits of traveling with a wingman—haven’t changed, she says. “We’re always willing to shop ’til we drop rain or shine, so we bring rubber boots, jackets, umbrellas, and lots of water.” Because the show gets bigger every year, she advises relying on pals when necessary. “It’s impossible to see all the great stuff, so tell your buddies if you’re looking for something specific because you’ll have more luck if they’re looking for you, too.”

Compared to my mom, Austin couple Britt and Mateo Barnstone are Round Top neophytes, but with more than 15 shows under the belts, they also have ample wisdom to impart—especially for like-minded folks who get wide-eyed at the prospect of massive-scale treasure hunting. Their most important tip: Make a plan.

“I was so excited the first time we came—I couldn’t believe such a place existed,” Britt says. After a few exuberant but amateurish attempts at navigating early on, Mateo says they got smart. “Geographically, the shows are lined up on a long, north-south road, so I recommend starting your day on one side and working your way one direction to avoid backtracking.”

The couple also suggests doing a little reconnaissance by reading up on some of the venues and choosing a few shows you know you want to check out. That said, Mateo says you should absolutely pull over and explore if you see a collection of dealers that looks interesting.

When the time comes to buy, it’s more than okay to haggle—but only if you do it fairly. “Make a reasonable offer, and it will be considered,” Britt says. “Vendors know what they paid for items and need to make a profit.” If you can’t commit on the spot because you need to measure a space or mull over a price, she recommends getting a written offer on the vendor’s card so you can remember how to locate your treasure later on.

Finally, both my mom and the Barnstones say to enjoy the thrill of the hunt, because the prizes you leave with may not be the one you set out to find. For my mom and her merry band of diehards, it’s not even about finding stuff anymore—it’s about camaraderie and having a good time. “It is a great experience,” she says. “The vendors are all Texas friendly no matter where they are from—just be prepared to do a lot of walking.”