Can We Preserve This Monument to Texas Independence? 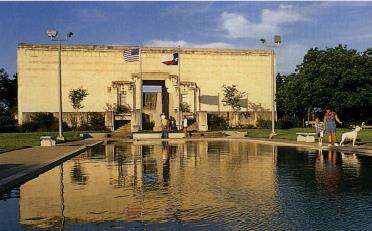 Restoring this 1936 monument to the Texas Centennial, which now serves as the Gonzales Municipal Museum, calls for $3.5 million. If you’d like to know more about the restoration plan, e-mail [email protected]

My anecdotal investigation tells me that most folks overlook the architectural gem that now houses the Gonzales Municipal Museum. The building is not well marked, so they breeze past on Alt. U.S. 90. This Art Deco limestone beauty, built in 1936 as a monument to the Texas Centennial, now languishes on a parkland city block, reflecting pool in front and amphitheater in back, awaiting the restoration it deserves.

But the overgrown shrubs, the stained exterior, and cracked stones do not obscure the outstanding design and finely wrought detailing. The Lone-Star-topped granite-and-bronze monument that sits in front of the building acknowledges ”The Immortal Thirty-Two,” the men from Gonzales who fought their way into the Alamo in response to Colonel William Travis’ defiant letter—the only Texians to take such dramatic action when confronted with a call to defend this raw land.

March is the ideal time to visit the museum and the town of Gonzales and to commemorate Texas Independence. Gonzales, a truly essential landmark in the Texas fight to free itself from Mexico, is known as “The Lexington of Texas” because the first shots of that war were fired here in The Battle of Gonzales in late 1835.

In mid-March of 1836, Sam Houston, newly appointed leader of the Texian army, received the news of the fall of the Alamo while in Gonzales. After ordering that the town be burned, Houston and his army retreated, stopping to regroup about 10 miles east. A majestic live oak, called the Houston Oak, marks that spot.

On a rainy and cool winter morning, I turned off Alt. 90, drove through an open gate, and stopped near the oak to spend a few minutes imagining how Sam Houston felt that gray, spring morning, with Gonzales a smoldering ruin and 400 or so volunteer soldiers looking to him for guidance as, all around, the rag-tag settlers fled for their lives.

When I returned to the museum, a sprightly mockingbird perched atop the Lone Star of the Immortal Thirty-Two Monument. Maybe one of that bird’s distant ancestors had given Houston just a glimmer of hope for the victory to come.