A Close Call in the Davis Mountains 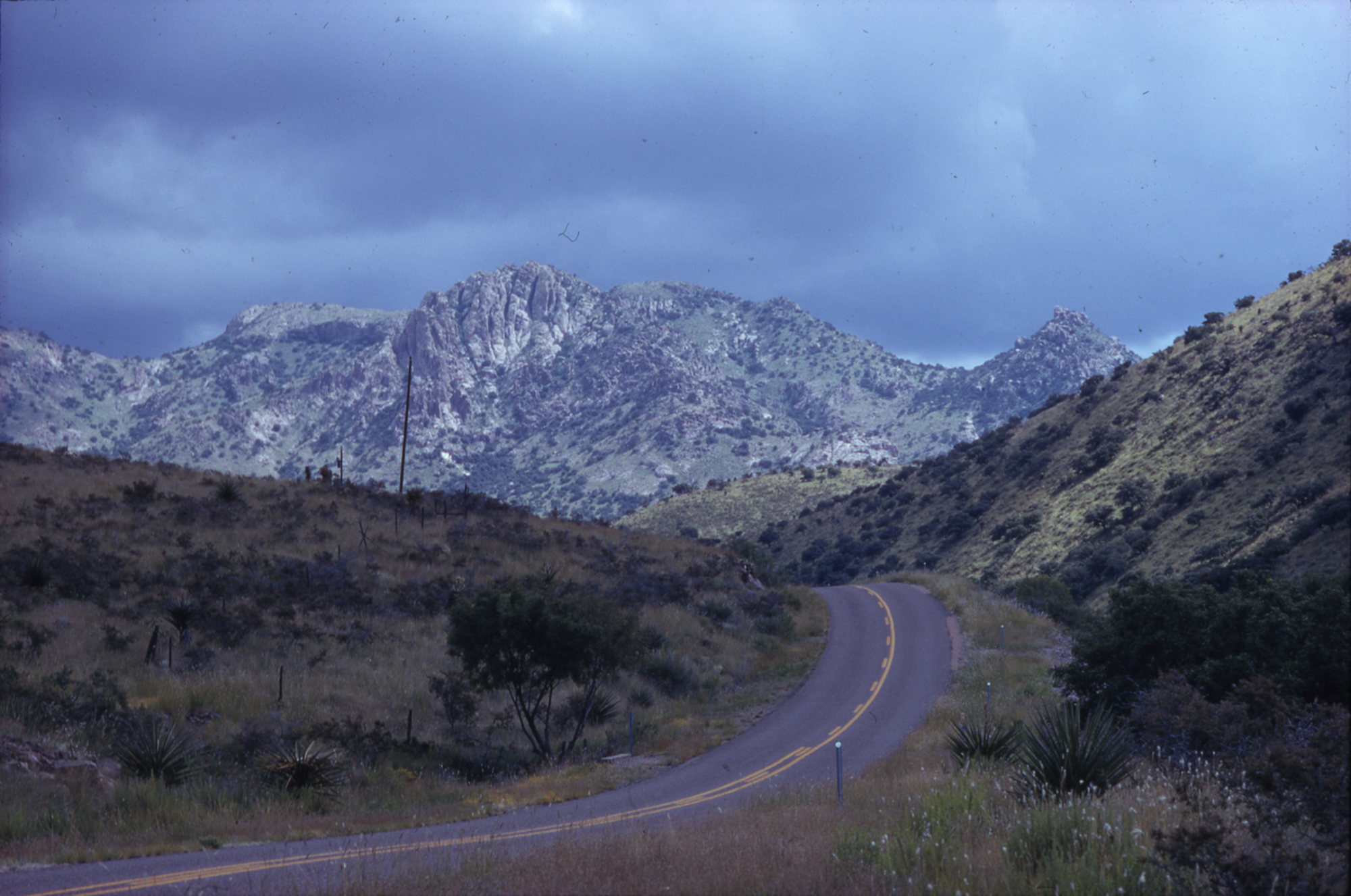 A road curves through the scenic Davis Mountains

It was late August 2020, a season when the pandemic felt both unfamiliar and inveterate. I was sleeping at my mother’s house outside of San Antonio, pacing the halls, rearranging sock drawers, itching to climb in my car and drive away. Drive where? Drive west. I had no plan, but the trunk was packed: A tent, matches, and blankets. A hammock, a coffee pot, and a Solo Stove. To-go packets of laundry detergent, pouches of ramen, a can of beans. On the road, I would go where I wanted when I wanted. On the road, I would take back control of my life.

I landed on my family’s doorstep that summer worn down by fear. First, little fears: The flash of a rat’s tail under the dishwasher in my Manhattan apartment, the rickety shake of an elevator from 1962. Then, bigger fears: The echo of a neighbor’s cough. The wail of an ambulance through otherwise empty streets. The concrete possibility of dying alone, thousands of miles from home. In June 2020, I flew from New York to Texas waving the white flag of defeat.

The move left me uprooted, unmoored. I was a Texan—I had a Texas birth certificate, a Texas driver’s license, a Texas accent—but it had been five years since I’d lived as one. Summers of Shiner Bock and Blue Bell felt like lost memories as I worked in skyscrapers and hailed cabs in the snow instead. Without Manhattan, without my ambition, without my big plans, who was I? Clad in holey sweatpants, wolfing down Whataburger on the couch, my past self and present reality seemed irreconcilable. Days passed in a slow, sweltering haze. I lay paralyzed with questions: Where would I live? What would I do? Who would I be? 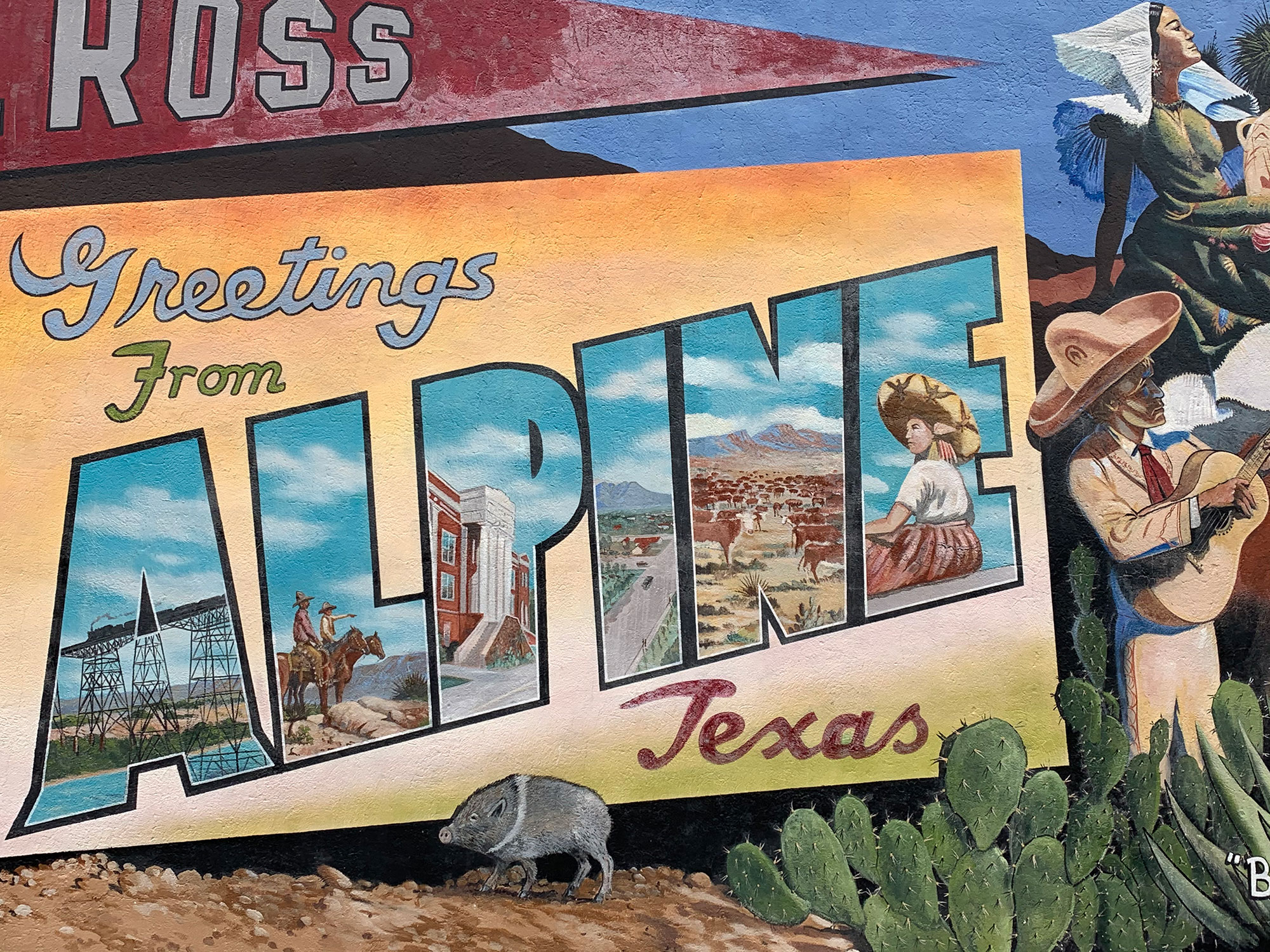 A mural on the side of the Kiowa Gallery in Alpine. Photo by Ali Montag

Slowly, my brain began to turn, designing a plan to reset the clock. A trip. It would be a class on resilience; my teachers the ​​creosote flats and scrubby mesquites of West Texas, my textbooks the main streets of Marathon, Alpine, and Balmorhea. I would remember how to pump gas, read a map, and pitch a tent. More than that, I would remember how to live.

I left home on the first Saturday in September, the first-morning cool air cut through stagnant, humid heat. I drove for six hours, putting distance between myself and my life with each of the 380 miles. I reached Alpine—a town of trim houses and vast sunsets that felt so peaceful, so orderly, and so civic it couldn’t possibly be a part of our national terror—by nightfall. I watched leaves fall atop a gazebo at the Brewster County Courthouse, peered at locals browsing Front Street Books, and checked myself into the Big Bend Biker Hotel. Crisp sheets, a view of the town square, and a dozen Harley-Davidsons parked outside. Isolation sank in: It was my first night alone on what would become a 30-day adventure. The freedom felt expansive, both geographically and emotionally. I’d liberated myself of the ever-present audience women must perform for: The eyes that remind us to wash our faces, tweeze our eyebrows, and comb our hair. Suddenly, there was no one around to care—no one to tsk if my thighs gathered a bit of new cellulite or if my chin produced a pimple. I ordered queso at the hotel bar and ate it with abandon.

For five days I did as I pleased: I hiked in Big Bend, explored Terlingua, and drove myself through the clean streets of Marfa. I ignored the small ache in my stomach—some twinge of loneliness, an unidentified longing—and busied myself with the work of travel. I changed my oil in Alpine, booked a campsite location via Hipcamp for Fort Davis.

By the time I reached the Davis Mountains the next day, green and shaded by pine, I was enraptured by that narrative of self-reliance. I piloted my car down State Highway 118 with confidence, turned down a dirt road, and reached its end. The directions told me the campsite would be at the top of the mountain. I stared at the final stretch of road, an unpaved half-mile at a sharp incline. “Four-wheel drive is a must,” the campsite instructions read. My car lacked four-wheel drive, but hubris left no room for doubt. I would make it to the top. I hit the gas, climbing up, up, up, my back pressed against the seat, the nose of the car right in front of the windshield, gaining momentum, gaining speed, gaining altitude. 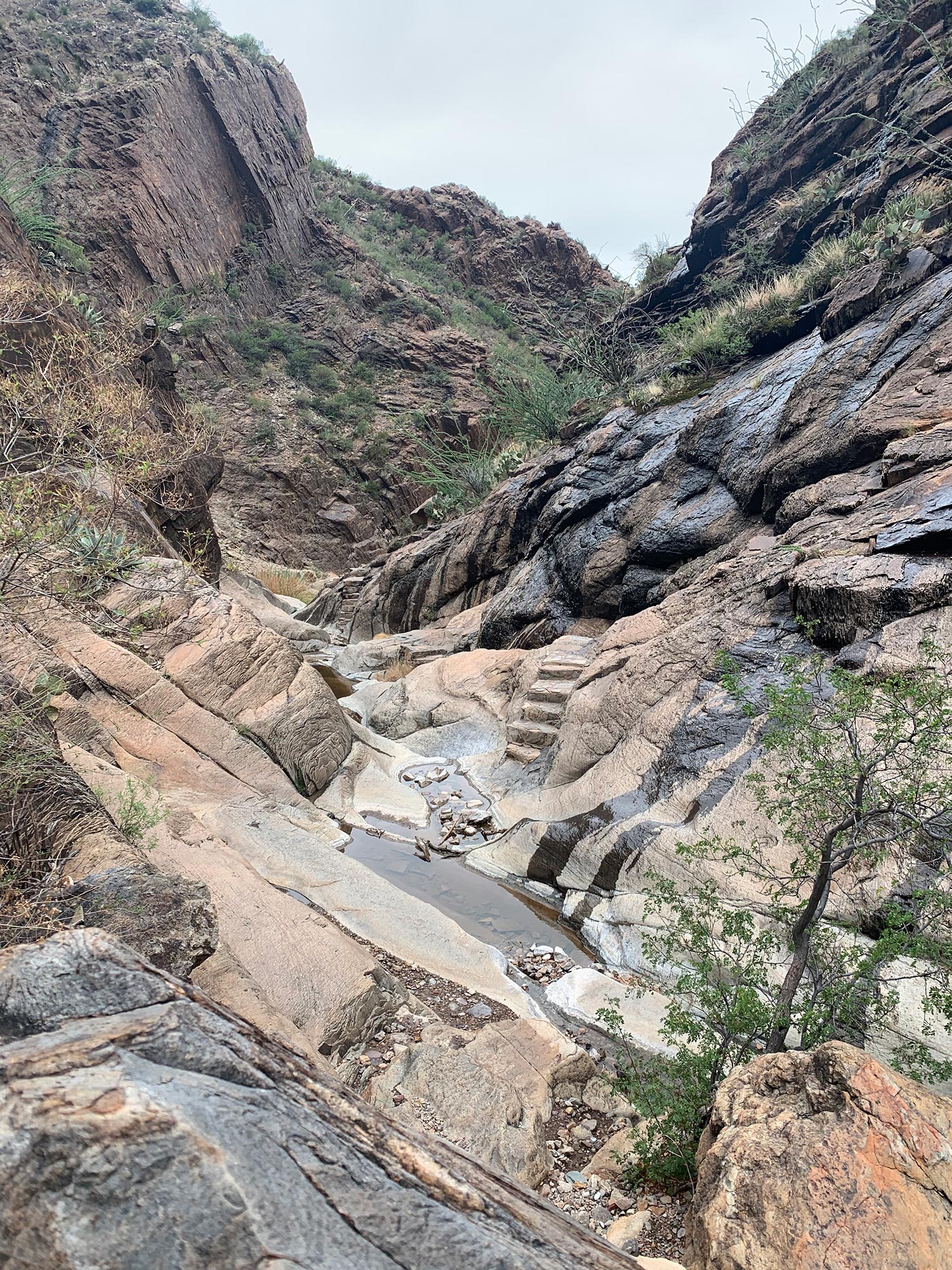 A rocky view on a trail at Big Bend National Park. Photo by Ali Montag

Then a skid. The sound of grinding. The smell of rubber. I was stuck.

I hit reverse and slid backward, suddenly out of control, the brake pressed against the floorboard but the car slipping, slipping fast. I tried drive, then reverse, then drive, praying to coax my tires out of the ruts I’d created, back and forth. Finally I hit the parking brake. I got out of the car to look at the road. What I saw made me sick: My car’s back right wheel rested on the edge of a cliff, inches from a drop-off. My hands shook. One more minute in reverse and … it would have been a long way down. That was it. No more. I locked the car doors.

So what was my plan? I had seen no other cars on this dirt road (no surprise, given the quiet nature of Fort Davis, a town with a population of 1,099). I checked my phone. No signal. Even with signal, the nearest AAA tow truck would be far away—perhaps in El Paso, three hours distant. The sun was beginning to set. There was nothing to do but walk.

As I walked, panic set in. On my quest for independence—for personal redemption—I’d found anything but. I was alone, on a dirt road. I was in trouble. And there it was, clear as a bell: I needed other people. I needed to ask for help.

Within a mile, I came upon an RV pulled caddy-corner to a teardrop camper. Dogs barked in the distance. Gathering my courage, mentally conjuring the sort of West Texas character I might find—a cattle rustler, outlaw, moonshiner on the run—I approached to knock on the door. I was greeted by a woman with long brown hair and kind eyes. She smiled. She called a few friends. They came quickly, with a 6-wheel truck, a chainsaw to clear surrounding saplings, and lots of laughter. They pulled my car out of its ruts. They gave me hugs and reassurance. They gave me back my keys. They gave without expectation.

Back on the highway, I was struck by the futility of my initial goal. I was never going to journey into the unknown, prove my strength and return a victor—not alone. No one achieves anything on their own. No one succeeds by themselves. Instead of reaffirming my ability to control my life, to take action, to bend the world to my will, my trip reaffirmed what has always been true: Hardship is unavoidable. Tires get stuck. Diseases ravage. The world changes. But we have to keep going. All we can do is turn to each other, lost and alone, and dig for the strength to ask for help.

As the sun set along Interstate 10, my car pointed still westward, I drove on toward San Francisco carrying this simple truth: No matter how far you go, you can’t outrun needing someone else.