Written by Sarah Thurmond | Updated: May 11, 2021 | Filed Under: CultureTravel News 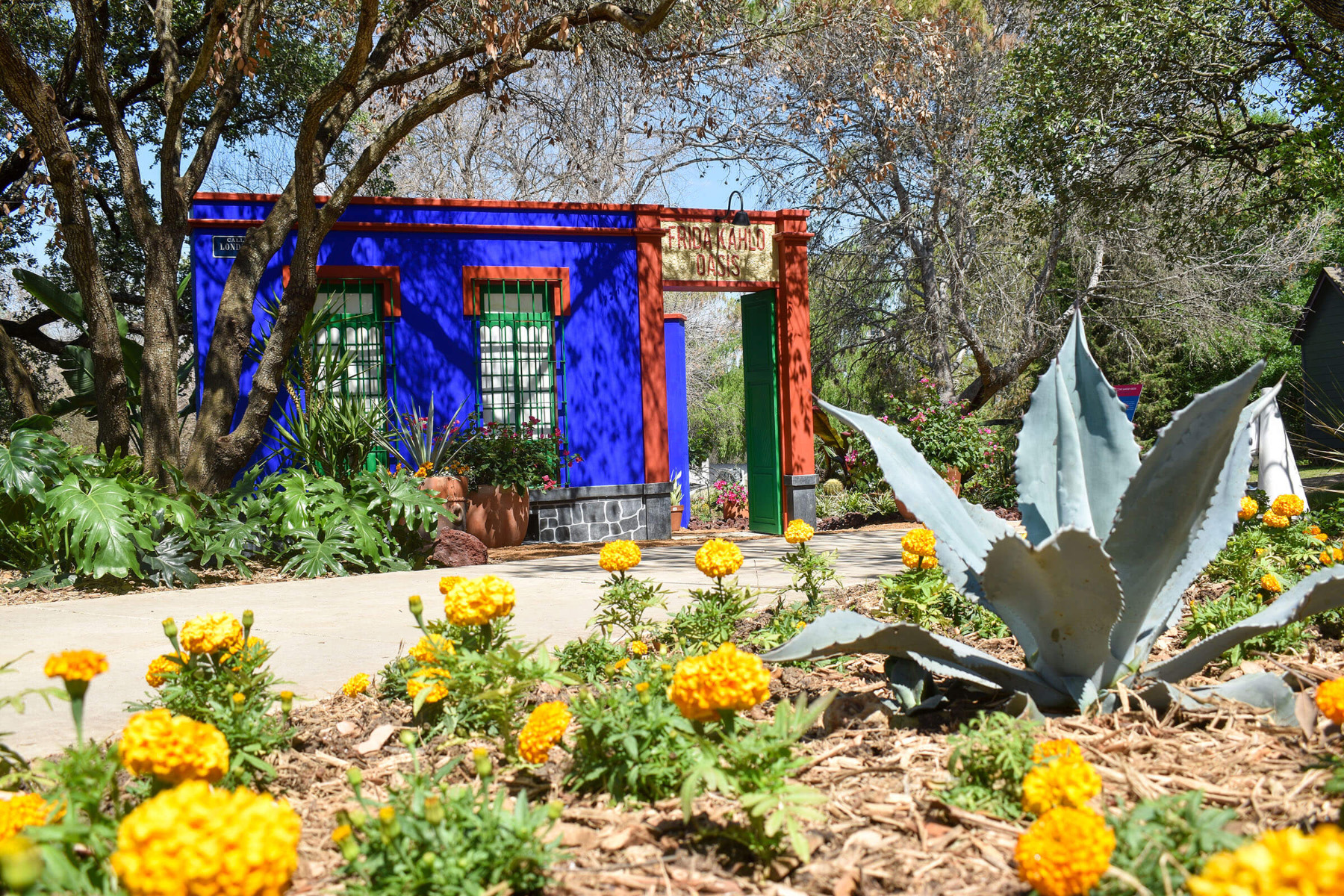 Known for her self-portraits, vibrant use of color, paintings that blended realism with a touch of fantasy, and that iconic unibrow, Frida Kahlo is considered one of Mexico’s greatest artists. Texans are getting to experience much of her works and artistic inspirations this spring, starting with the Dallas Museum of Art’s Five Works exhibition, featuring some of the artist’s lesser-known pieces (show closes June 20). Now, San Antonio hosts the world premiere of a new outdoor exhibition that transports visitors to her famous home in Mexico City.

La Casa Azul (“The Blue House”) is the place where Kahlo spent most of her life, growing up there surrounded by her family, living there with her husband, Mexican painter Diego Rivera, and even dying in the home at the age of 47.

After her death in 1954, Rivera led the effort to realize Kahlo’s dream of turning the home into a museum, and tourists have been flocking to Museo Frida Kahlo ever since. From May 8 to Nov. 2, Texans won’t have to travel to Mexico City to get a sense of Kahlo’s sanctuary, as the San Antonio Botanical Garden’s newest exhibit, Frida Kahlo Oasis, brings the Blue Home and its lush gardens to life, providing a sense of the place where Kahlo’s creativity flourished.

The garden at Casa Azul is an essential part of the museum, as it’s where Kahlo spent much of her time recovering from her numerous health problems, including contracting polio as a child and surviving a bus accident when she was 18.

“One thing about Frida that a lot of people don’t know is that she was an avid gardener,” says Emily Knapp, director of marketing at the San Antonio Botanical Garden. “The plants in her garden are reflected in many of her most important works, and the garden at Casa Azul is just as important as the home itself.” 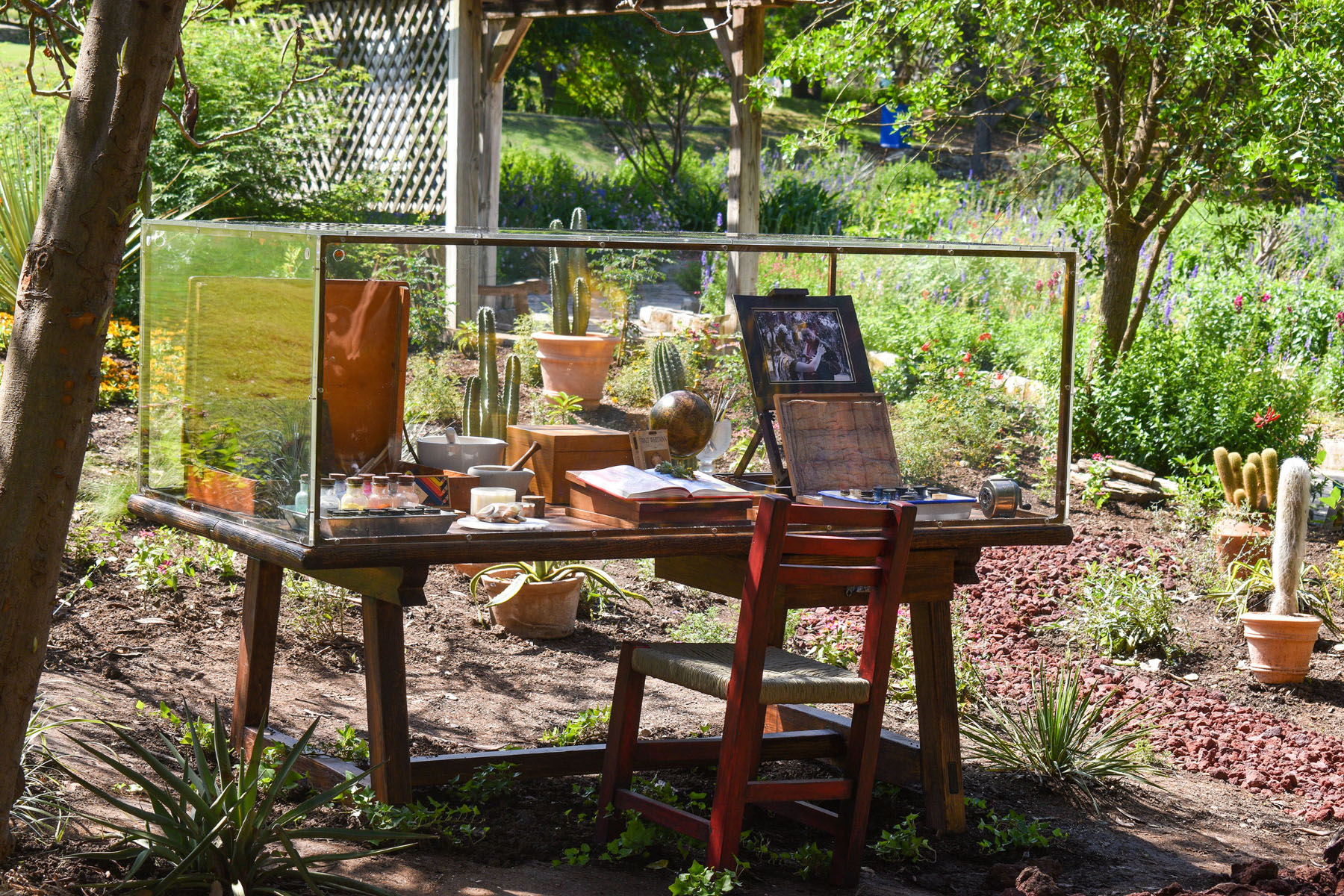 Working directly with Kahlo’s family for the exhibit, the botanical garden was able to learn important details about her life. “They were thrilled that we’re doing this because they wanted that story of her loving her plants to get told,” Knapp says. “They knew how happy her gardens made her, so they’re happy we are bringing that story to life.”

Visitors to the exhibit enter the 2,100-square-foot space in the gardens through the replicated Casa Azul front door facade, where they’re greeted with various garden beds containing plants like elephant’s-ears, agave, marigolds, and sky flowers. All plants throughout the exhibit are ones that Kahlo saw in her daily life at Casa Azul, or observed in nature, many of them appearing throughout her artwork.

Other Blue House facades are placed around the garden, including the Frida y Diego Vivieron en Este Casa (“Frida and Diego Lived Here”) wall. Famous landmarks from the home are also replicated, including the pyramid that displays pieces of Diego Rivera’s pre-Colombian artifacts collection, Kahlo’s desk and easel, and a frog-themed fountain. 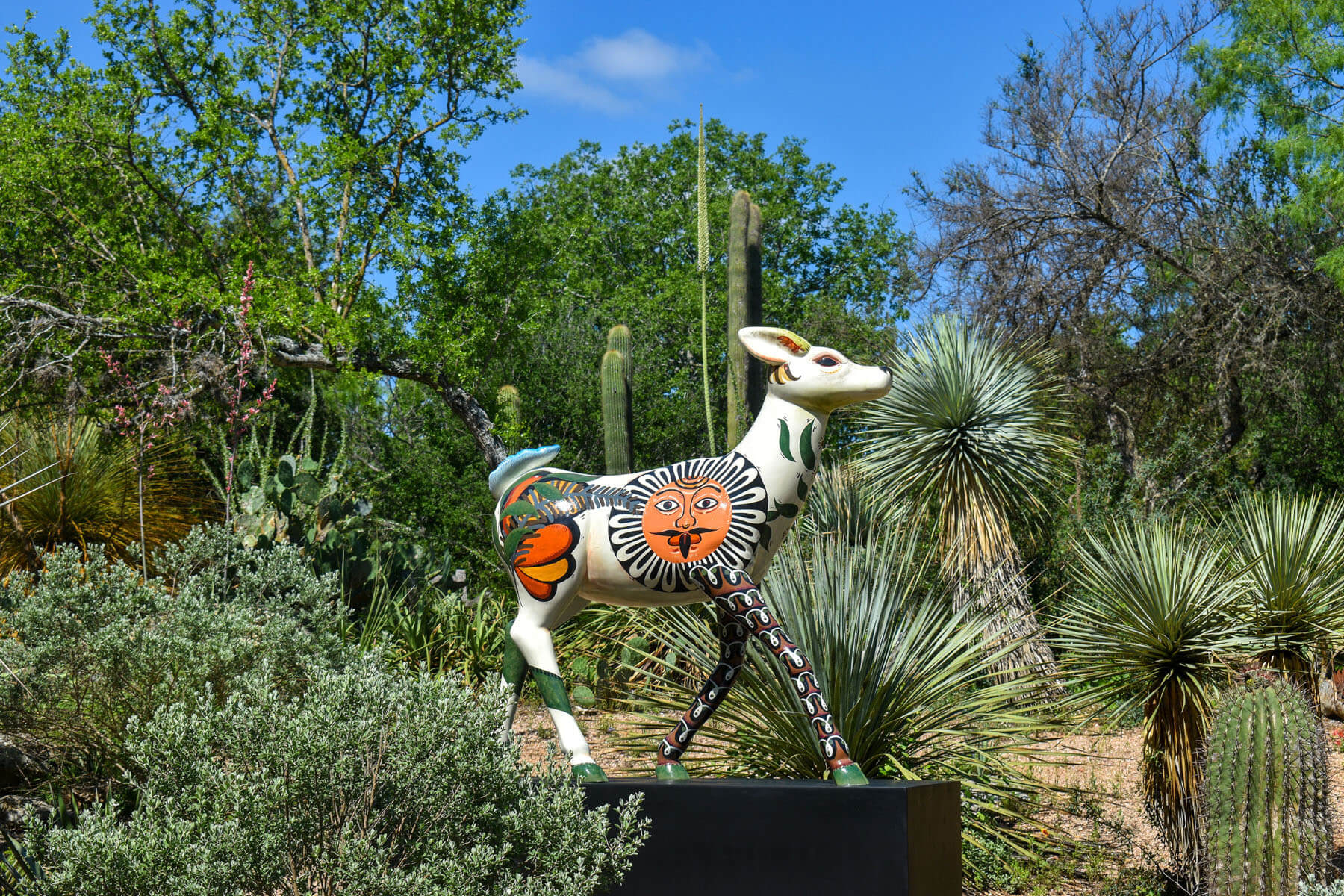 Knapp encourages visitors to explore the entire botanical garden, as it contains six sculptures of animals that Frida loved and incorporated into her work: a dog, monkey, parrot, hummingbird, deer, and butterfly. In the WaterSaver Garden, there’s the Botanical Fridas, a collection of six sculptures created by Mexico City sculptor Paul Zarkin and hand-painted with designs by various artists. Each one represents Kahlo in a different way.

“We have a metallic Frida, a whimsical Frida,” Knapp says. “The Botanical Fridas are having their world premiere here, as they were supposed to travel the world, but Paul wanted to debut them here in San Antonio before they travel elsewhere.” 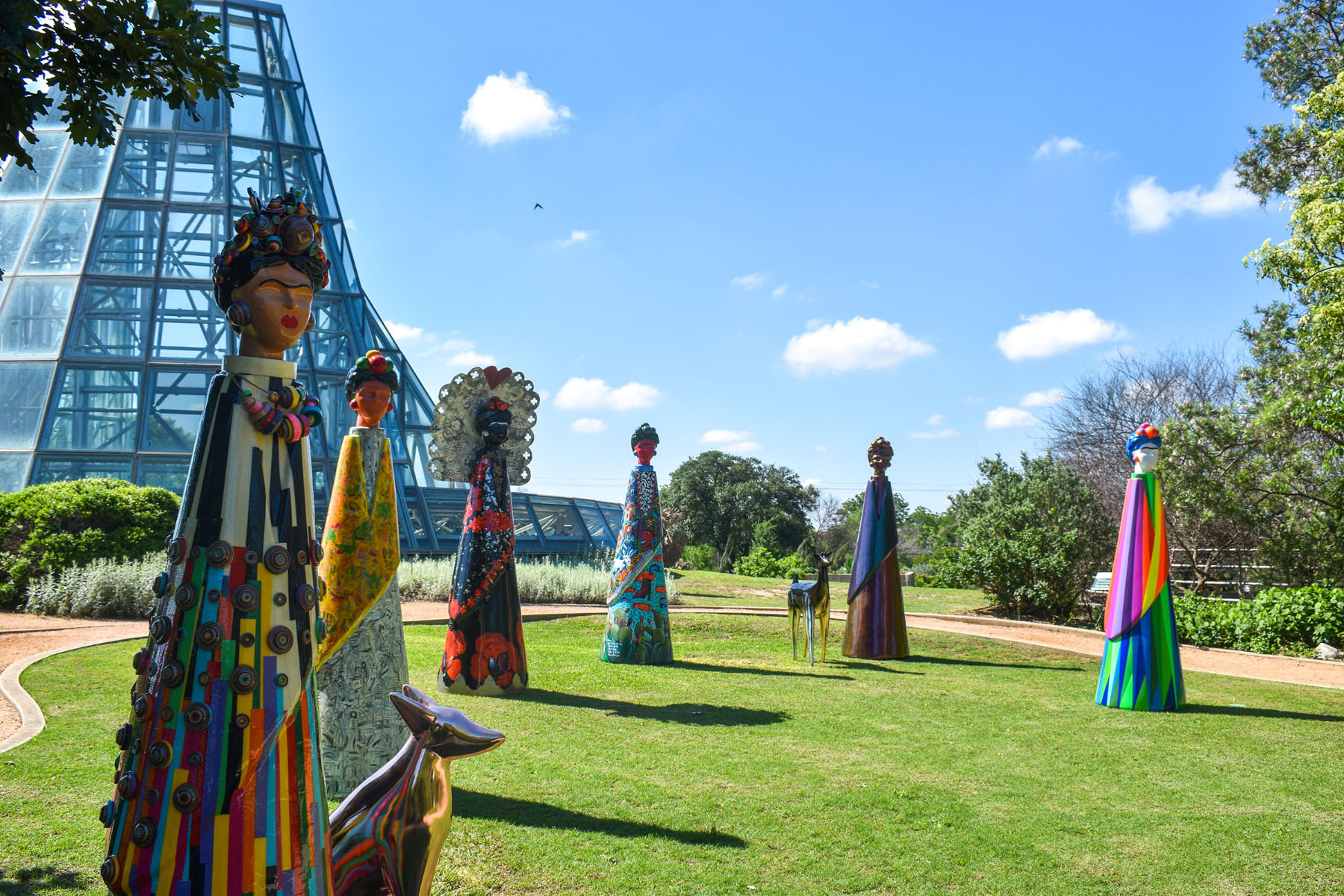 Numerous Frida Kahlo-inspired events and programs go alongside the exhibit, including culinary and cocktail workshops, art history lectures, and curated tours. Knapp recommends catching a Noches de Frida event (taking place on select Thursdays from May 13 to Aug. 26), where docent-guided tours of the exhibit pair with picnics and performances by local DJs.