Explore the Texas Panhandle with These Four Spring Daytrips

From the birthplace of Buddy Holly to Waylon Jennings' hometown, you'll see wide-open skies throughout these drives. 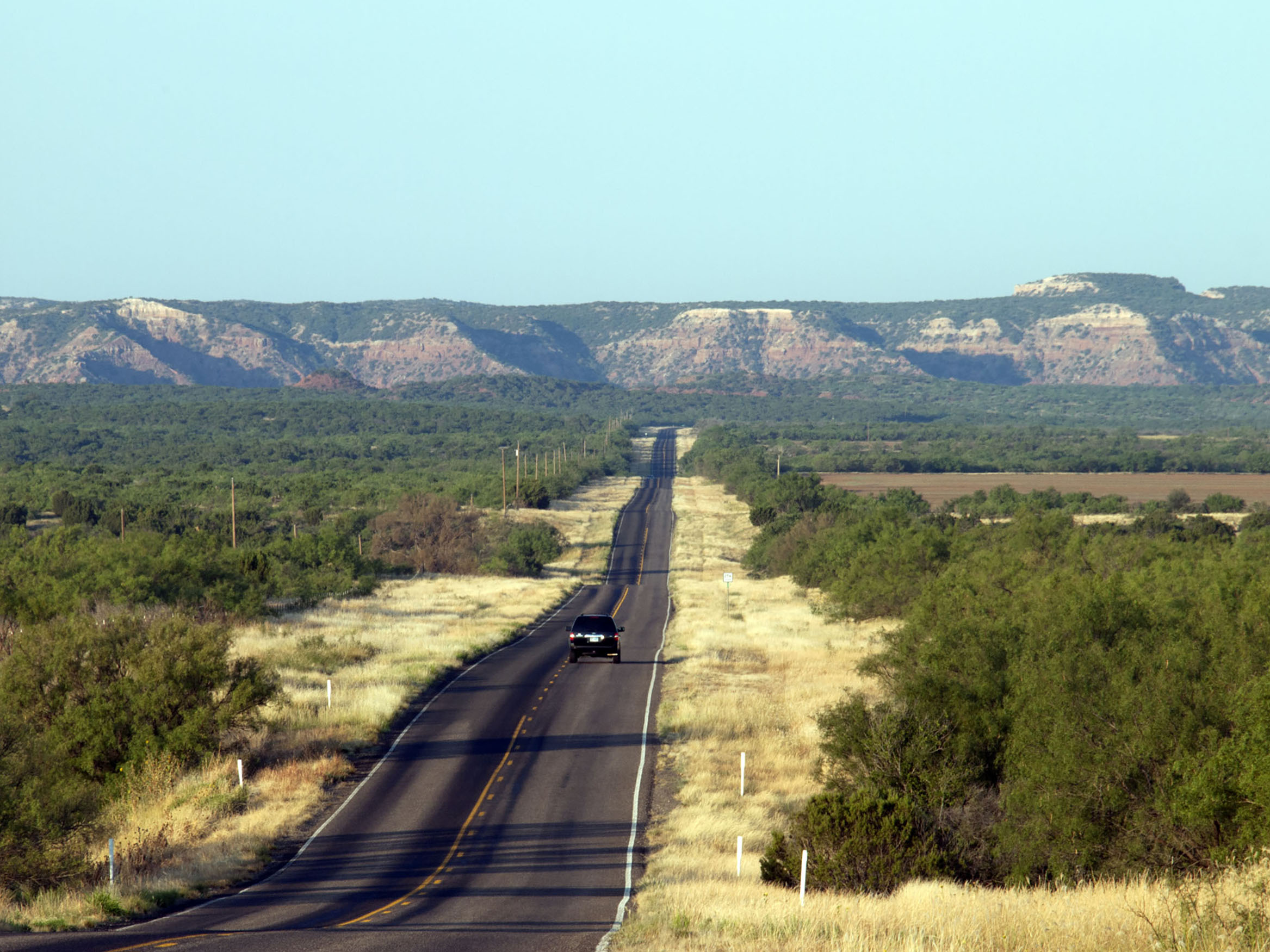 In the third part of our spring day drives series, we’re heading to the Texas High Plains. On these trips, you’ll see big skies, wind turbines, the top of the state, a roadside attraction honoring Woody Guthrie, and a museum exhibition about the children’s book series Hank the Cowdog.

The Lubbock-Fluvanna Loop
Trip time: About 3 hours, depending on stops

First, a small geography lesson: Lubbock is on the Llano Estacado, a flat, featureless plateau about 3,500 feet above sea level that sprawls across the South Plains, first described by conquistadors. This city is known for being the hometown of 1950s rock ‘n’ roller Buddy Holly, so a stop at the reopened Buddy Holly Center is de rigueur for any visitor. Here you can see the West Texas Walk of Fame and the famed bronze statue of the late musician.

Nicknamed Hub City because five major highways run through it, creating a wheel hub-like effect if you look at the city from overhead, Lubbock has more sky than any other city in Texas. That’s a brag you just can’t challenge. And if you drive an hour and a half south on US 62, there’s even more sky, plus the Caprock Escarpment, where the Llano Estacado dramatically drops to the Rolling Plains, with wind turbines galore.

“It is my favorite drive at sunup and sundown,” says Ayn Bowron, a local gadabout who used to manage Stubb’s Bar-B-Q in Lubbock and had her own joint, the Mean Woman Grill, before becoming the laundress at Lake Alan Henry Lodges in Justiceburg. “I am typically on that road Sunday nights as the sun goes down. I have seen the world, and I would pit our skies above any other.”

From Lubbock, if you drive south on US 84 about 40 miles to Post, you’ll find that the two-block Main Street, anchored by the Hotel Garza, merits a stroll. Then, continue on US 84 about 15 miles passing Justiceburg to Farm to Market Road 1269. The next few miles to Fluvanna climb up the Caprock through a maze of windfarms. At Fluvanna, take Farm to Market Road 612 east 5 miles back to US 84, dropping off the Caprock again. Those turbines on the east side of US 84 belong to Amazon, one of the company’s largest investments in renewable energy. Go east on Farm to Market Road 612, back to US 84 and loop back to Lubbock. 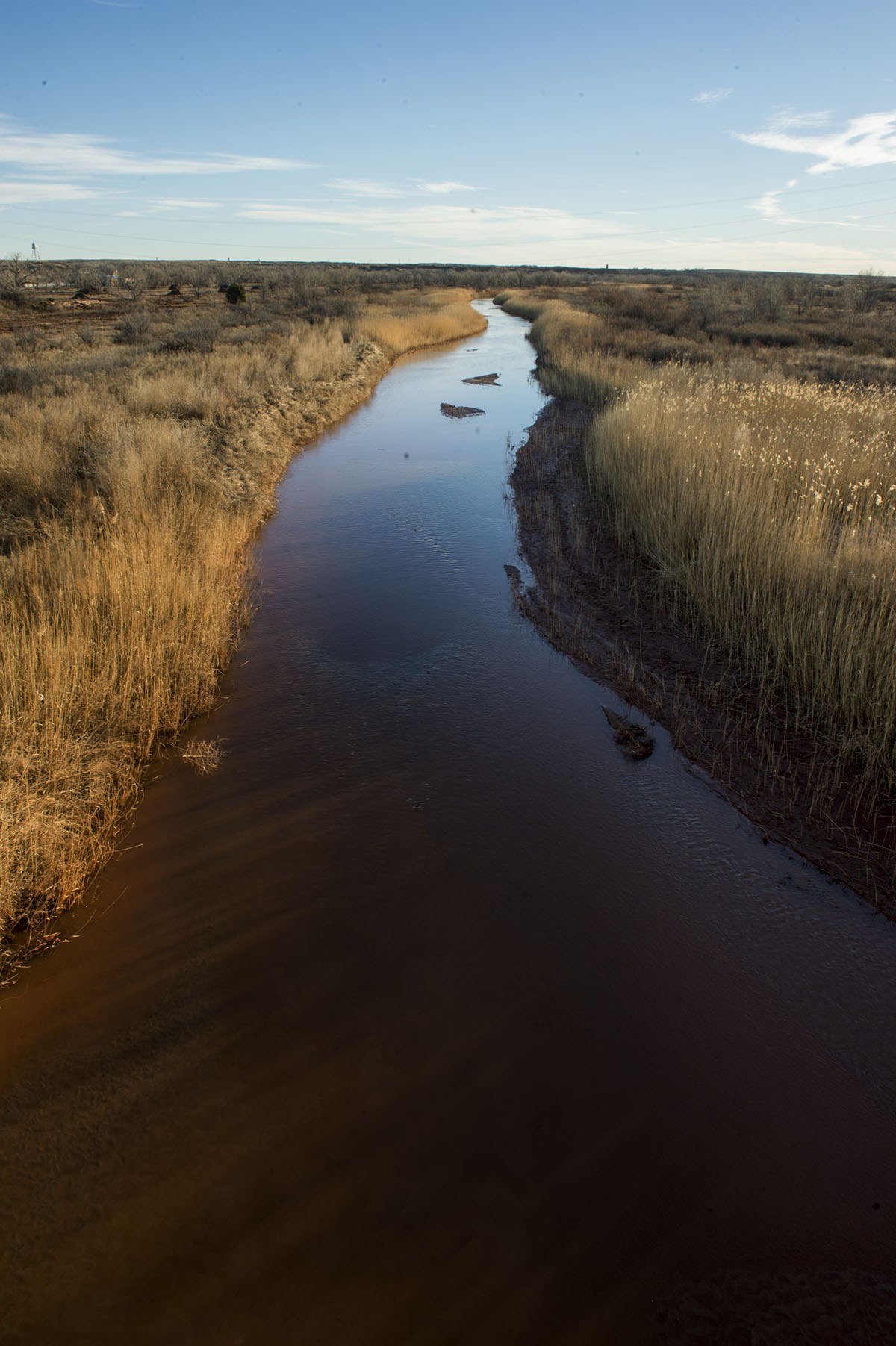 Booth Cemetery on the Canadian River in Oldham County. Photo by Michael Amador

From Amarillo, take Tascosa Road/Ranch to Market Road 1061 and head west 42 miles through the subdivision of Valle De Oro to Boys Ranch, where Cal Farley, a world welterweight wrestling champion and Amarillo businessman, founded a ranch and residential community for troubled youth in the 1920s. Parts of the road follow the Canadian River through treeless rolling prairie, gulches, and bluffs, hinting of the foothills of the Rockies looming farther west. Sunsets here are consistently stunning.

It’s all about being in the Big Empty, a landscape defined by prairie and sky. “Every time I drive the western side of the Panhandle I have to remember to take water and snacks,” says Pampa native and former Texas Monthly editor Anne Dingus. “There are no places to get coffee or lunch, just small homes and big spreads.”

Tascosa, or Old Tascosa, became pretty much a ghost town when the railroad never came, but at one time it was the capital of 10 Texas counties and a rival of Dodge City, Kansas. It also has a Boot Hill Cemetery, one of many final resting places for gunslingers who died with their boots on. At Tascosa, pick up US 385 and head north to Channing, the headquarters for the XIT Ranch, once the largest ranch in the world. From Channing, go east 15 miles on State Highway 354 to US 87 South. It’s 40 miles back to Amarillo. 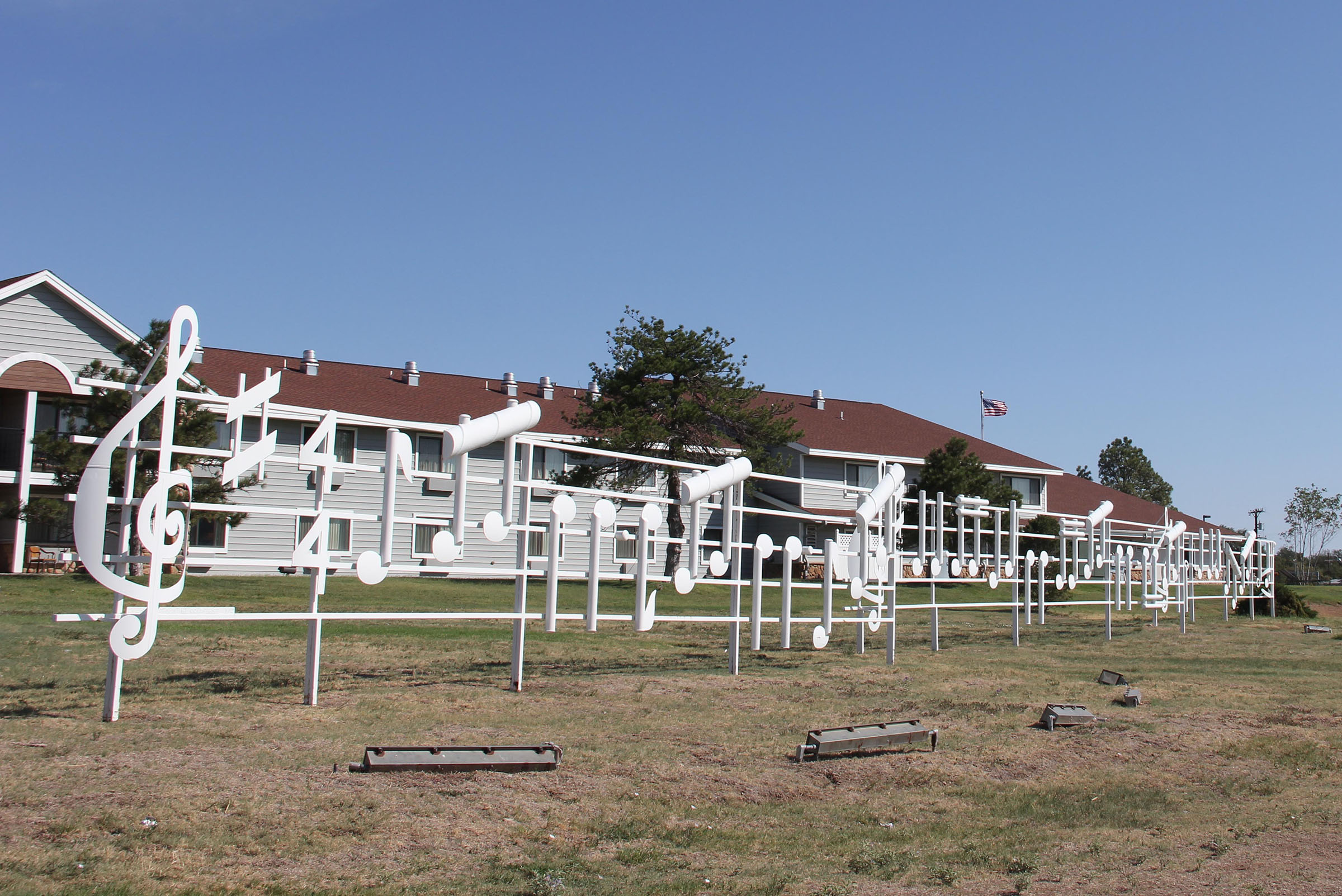 To the Top of Texas and Back
Trip time: About 4 hours

Start in Pampa by checking out the This Land Is Your Land metal sculpture off of State Highway 70 and the Woody Guthrie Folk Music Center in downtown, located at 320 S. Cuyler St. The iconic folksinger may have been born in Okemah, Oklahoma, but Pampa is where he came of age, learned guitar, voraciously consumed books, and hopped freight trains to California.

From Pampa, head 63 miles north on US 70 to Perryton. “You can almost immediately spot pronghorn on the east side of the highway once you leave Pampa,” Dingus says.

Lorne Loganbill, once a longtime Amarillo resident, describes the drive across the Canadian River valley “as bounding prairie that makes you yearn for a passing thunderhead or an imminent Blue Norther to contrast the beautiful countryside.”

Perryton, at the veritable top of Texas, 47 miles from Liberal, Kansas, is the home of the Museum of the Plains, an excellent small-town museum with exhibitions that range in subject matter from Native Americans to the Dust Bowl to Hank the Cowdog (the author of the series, John R. Erickson, is from Perryton). There’s also the Watonga Cheese Factory, which has a retail store open to the public with a selection of cheeses as well as honey, pickles, beef jerky, popcorn, and other items for sell.

From Perryton, go east on State Highway 15 for 20 miles through Booker and Darouzett, then south on State Highway 305 about 10 miles to the town of Lipscomb, population 37, where wild turkey saunter around the Lipscomb County courthouse lawn and almost every standing structure has a deep history.

Continue south on SH 305 another 10 miles, then pick up US 60 for 13 miles to Canadian, one of the prettiest small towns in Texas, with the Mansion at the Citadelle, River Valley Pioneer Museum, restaurants, and a rail-to-trail hiking path. Continue south on US 83 past the Gene Cockrell’s “Aud,” a 50-foot-long and 17-foot-tall concrete brontosaurus sculpture that overlooks the highway, then pick up US 60 and head west through windfarms and the town of Miami (pronounced “my-aa-muh”) on your way back to Pampa, about 45 minutes from Canadian. 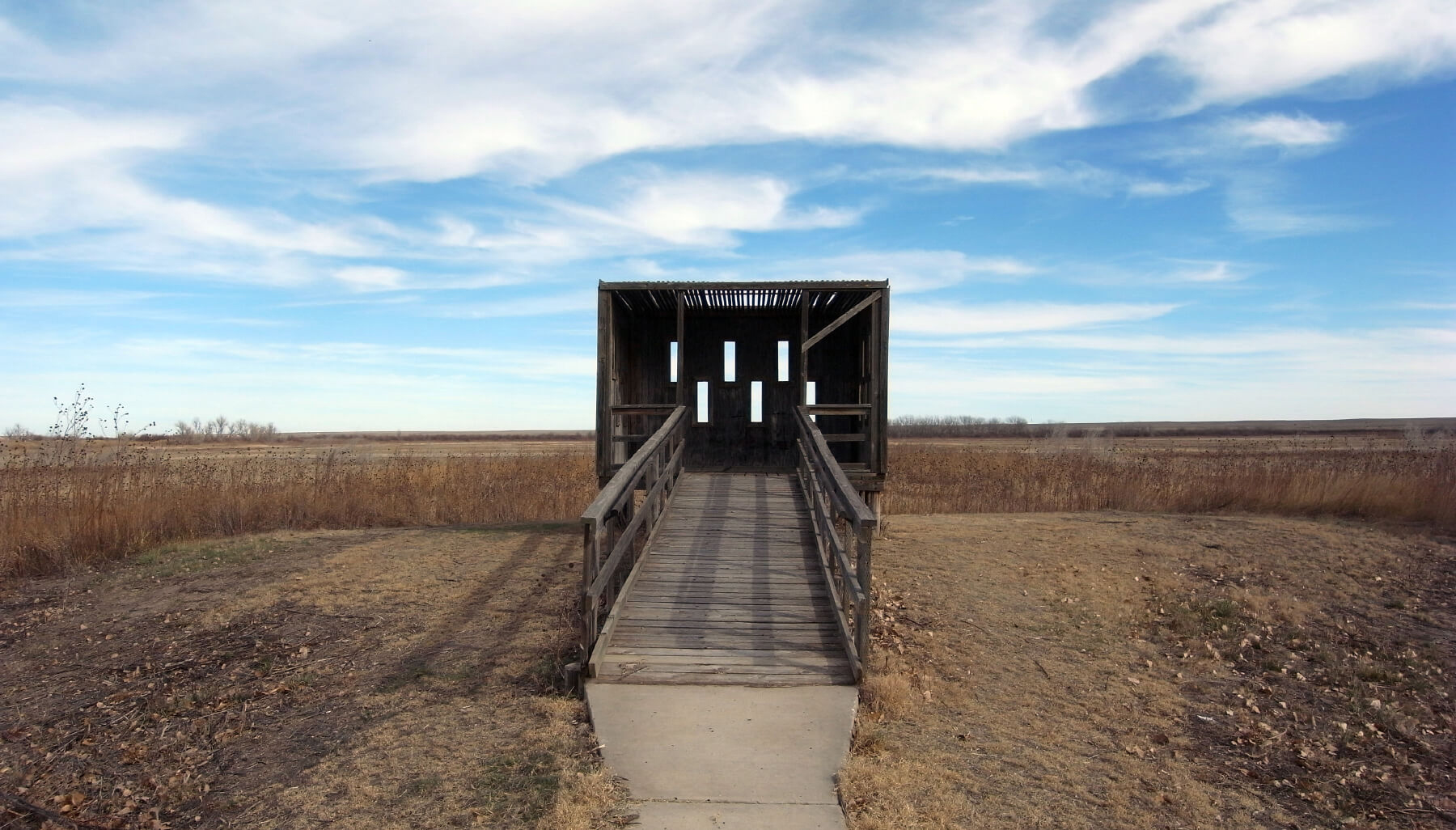 Amarillo native Wyatt McSpadden has been poking around back roads looking for subjects over his 40 years as a commercial photographer. One of his favorite drives is wheeling around the backroads from Amarillo to grab lunch at Evie Mae’s Pit Barbeque in Wolfforth, just west of Lubbock.

“It’s wonderful empty roads, two-lane blacktop. There’s nobody out there. Just big sky, straight roads, and Evie Mae’s,” he says, describing the food as “barbecue worth driving for.”

From Amarillo, head south on Interstate 27 to Canyon, then southwest on US 60 for 12 miles, turning south on Farm to Market Road 168 and driving 32 miles to Nazareth, passing through the Buffalo Lake National Wildlife Refuge and wind farms. Nazareth is home of the Holy Family Catholic Church, built in 1903, one of the only German-Catholic churches in the High Plains. Go west on State Highway 86 for 12 miles to Dimmitt, the Castro County seat where painted history wall murals tell the story of the town.

Continue west before turning south on Farm to Market Road 1055 to Earth, 26 miles from Dimmitt, a great place for Instagram photos, because, you know, it’s Earth. From here, drive south and pick up US 84 and go 25 miles to Littlefield, hometown of country music icon Waylon Jennings. Stop by Waymore’s Drive Through Liquor Store and Museum, owned by Waylon’s brother James and located on Hall Avenue at Farm to Market Road 54 (aka Waylon Jennings Boulevard).

From Littlefield, travel south 25 miles on US 84 to Shallowater, then pick up County Road 1400 and head 13 miles to Wolfforth and Evie Mae’s, located at 217 US 62. Warning: the place is open Wednesday through Saturday from 11 a.m. to when they sell out, so get there early.

Return to Amarillo on US 62. Drive 62 miles via Idalou and Ralls to Floydada, the “Pumpkin Capital of the World.” Then pick up SH 207 north for 87 miles, skirting the Caprock while passing through Silverton, Tule Canyon, and the eastern edge of Palo Duro Canyon to Claude. From Claude, head west on US 287 30 miles back to Amarillo. If you’re in the mood for classic burgers cooked on a flattop grill, visit Golden Light Cafe and Cantina, a 75-year old tradition on the original Route 66.