Homegrown celebrations from Gruene to Gilmer 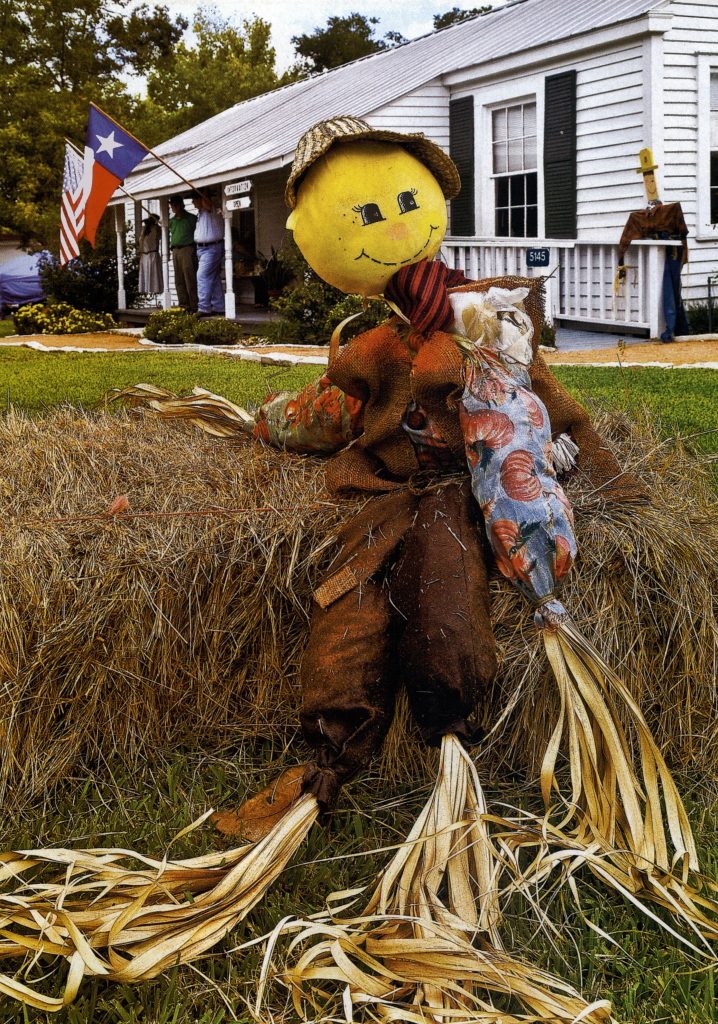 Fall. Small towns. Big celebrations. It’s a winning combination in Texas, where many communities still observe fall festivals that started decades ago. There’s something about the first hint of autumn that gets people out and brings them together. Maybe it’s a collective memory of harvest celebrations long past, or maybe it’s just a yearning to enjoy the outdoors after a long, hot summer. Whatever the reason, Texas small towns offer an abundance of fall festivals, each with its share of down-home delights and discoveries.

My personal favorite is the Texas Clay Festival, which takes place this year October 24-25 in Gruene, a picturesque hamlet about three miles north of New Braunfels proper. (Officially the Gruene Historic District, the village was incorporated into the city of New Braunfels in 1979.) Take it from me: You don’t have to dabble in pottery to dig the Clay Festival. For starters, the setting—spreading live oaks in the shadow of Gruene’s iconic water tower—couldn’t be more welcoming. Hay bales scattered over the grounds of Buck Pottery (owners Dee and Terry Buck helped organize the juried show 16 years ago) provide impromptu seating and mark pathways that wind among white tents and multicolored umbrellas, where potters sell their wares and talk about their work.

The atmosphere is equally relaxed—what would you expect from a group of people who make their living, literally, working with the earth?—encouraging conversation among accomplished potters and mere lovers of pots. Small groups of spectators form semicircles around master potters as they demonstrate wheel-throwing, hand-building, raku-firing, and other techniques.

You sense that these artisans genuinely enjoy sharing their craft with the enthusiasts gathered around them. It’s this “celebrate-the-medium” spirit that sets the Clay Festival apart from other art shows. Some participants have described it as “a two-day clay love-fest.” Call 830/629-7975 or 830/833-2860; www.texasclayfestival.com.

A one-time R&B performer, Baines says, “Blues songs have themes everyone can relate to. They’re about tough times and people getting through. When you hear something like ‘Every Day I Have the Blues’ or ‘Call It Stormy Monday (But Tuesday’s Just As Bad); the music reaches deep down into your soul and touches certain feelings that take you back to a certain place in time. You’ve lived those lyrics, and hearing those songs brings a remembering to your being. People just really respond to that.”

Festivalgoers set up folding chairs and spread blankets in the spacious, tree-shaded venue. “This event is popular with all ages,” says Baines. ”We have acts with performers in their late 80s, like Pops Carter and the Funk Monsters, and we have a Denton Blues Idol contest that attracts a young audience. The main-stage lineup starts with the contest, followed by performances by up-and-coming bands and other professional blues acts, a special hour for amateurs with a passion for the blues, spotlight numbers by winners of the Blues Idol contest, and finally, a concert by the headliner. This year, that’s blues guitarist Michael Burks, who’s a W.C. Handy Award-winner, which is a big deal in the blues world: There’s also a second stage that features hip-hop and R&B artists, professional dance troupes, and area rappers. And beyond the music, there’s face-painting, bounce houses, arts and crafts, and an amazing variety of food, from barbecue to burritos to beans and cornbread. A shady park, heartfelt music, and great food- the Denton Blues Fest is a beautiful thing. Call 940/ 382-9100; www.dentonblackchamberonline.org.

Whether your passion is blues or bluegrass, pottery or pumpkins, it’s a good bet that Texas offers a small-town festival that speaks to you. If you love a parade-complete with marching bands and elaborate floats-head to Gilmer for the 72nd annual East Texas Yamboree. Enjoy sampling different ethnic foods? Check out the delectable noodles at the 21st annual Wendish Festival in Serbin. Here, we offer eight diverse events to pique your interest. Do yourself a favor and celebrate the season by joining in the fun.

Oatmeal Festival, Bertram, (45 miles northwest of Austin), September 4-5. What started as a spoof of Texas’ many chili festivals has evolved into a full-fledged celebration. Sponsored by 3-Minute Brand Oats, the Oatmeal Festival includes a 3K run and other events that begin at three or 33 minutes past the hour; a parade, during which it “rains” oatmeal; a Miss Oatmeal Pageant; an oatmeal cookoff; and silly games for adults and children. The common denominator: zany fun. For an extra treat, make the trip to Bertram on the Oatmeal Flyer, boarding the train in Cedar Park (visit www.austinsteamtrain.org for ticket information). For festival details, call 512/355-2197; www.bertramtx.org.

Brownwood Reunion Celebration, Brownwood, September 18-20. This three-day extravaganza in Brownwood’s historic depot area includes continuous live music, nationally known entertainment (country musicians Tracy Lawrence and Brandon Rhyder, plus Johnny Dee & The Rocket 88’s), and activities from a SK run to a barbecue cookoff.Stages, tents, and booths spread over 23 city blocks. Started in 2001 to share “all the wonderful things about living in Brownwood,” the event is billed as the first festival to be hosted live worldwide via strategically placed Web cams. Call 325/998-INFO; www.brownwoodtx.com.com/event.

Bluegrass Festival, Wickett (40 miles southwest of • Odessa), October 2-4. Held in the auditorium of the Old Wickett School, this festival is all about the music, with bluegrass fans coming from as far as Houston, Amarillo, and New Mexico. This year’s event features Roy “the Fingerless Fiddler” Thackerson, the Triple L Band, and other bluegrass performers. RV parking is available, and the Wickett Volunteer Fire Department takes over the former cafeteria next door, offering breakfast, hamburgers, and drinks throughout the weekend, and barbecue dinners on Saturday night and Sunday afternoon (following a gospel-music service that morning). Call 432/943-3135 for details.

Punkin Day, Floydada (50 miles northeast of Lubbock), October 10. The West Texas town that bills itself as “The Pumpkin Capital, USA” has hosted Punkin Day for more than 20 years. Expect to see orange orbs on display from mini-pumpkins (eight ounces or less) to Big Macs (100 pounds and up). The fun includes cow-patty bingo, pumpkin bowling, and a pumpkin-pie-eating contest. Live entertainment, arts and crafts, food vendors, and a street dance are also part of the lineup. Call 806/983-3434; www.floydadachamber.com/punkin.htm.

East Texas Yamboree, Gilmar (35 miles northeast of Tyler), Oct. 14-17. One of the state’s oldest and most successful festivals, the Yamboree has it all, from a queen’s coronation pageant to a Saturday-night barn dance. With a livestock show, cooking contests, and a carnival that expands every year, it could compete with most county fairs. Throw in several parades, a car show, art show, quilt show, fiddler’s contest, photography contest, essay and poetry contests, children’s activities, and an array of great eats, and it’s easy to understand the Yamboree’s enduring appeal. Call 903/843-2413; www.yamboree.com.