Find Serenity on a Tour of Fort Worth Public Artworks

Across Fort Worth, public artworks anchor an engaging driving tour 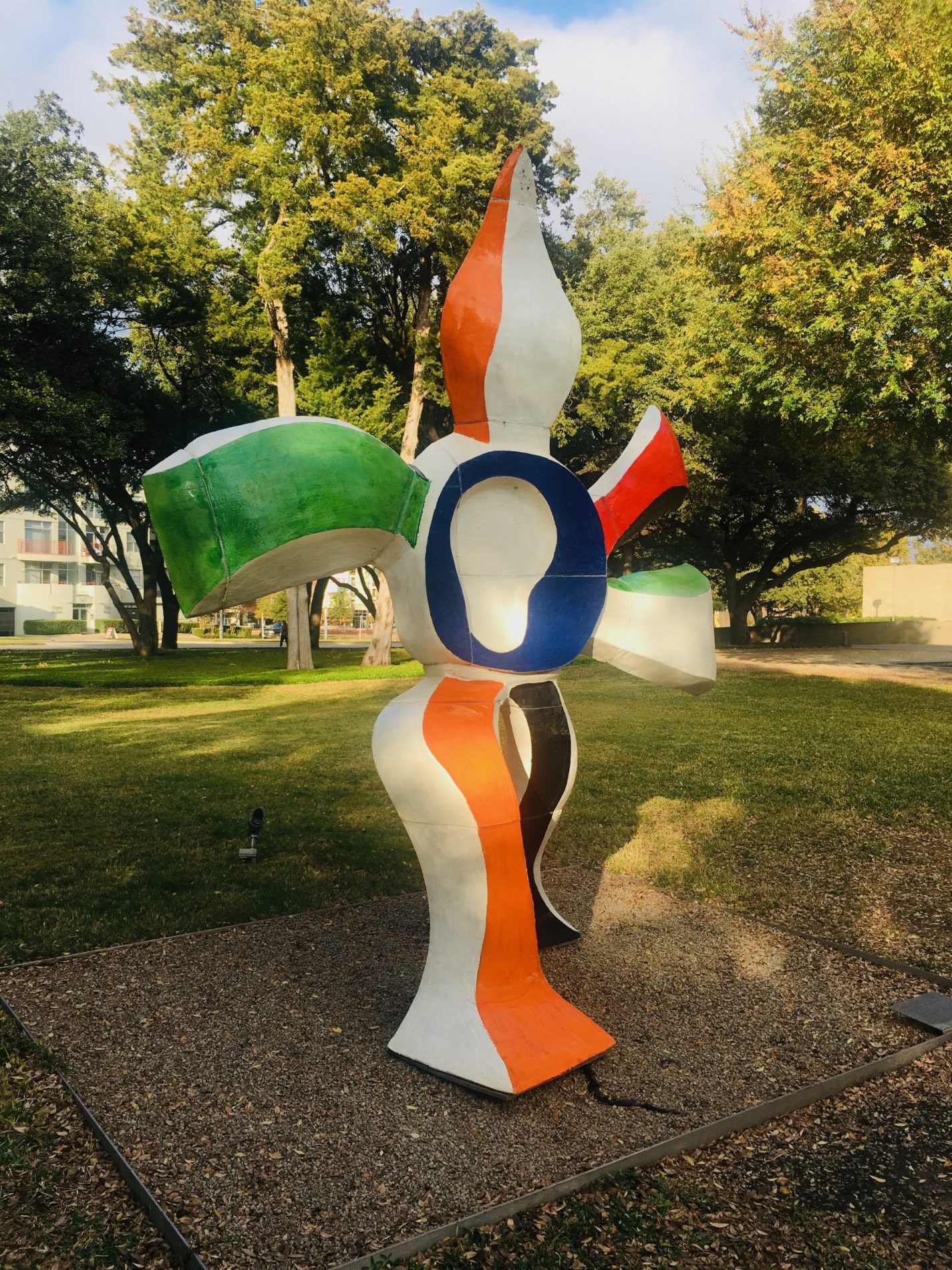 “Walking Flower,” by French artist Fernand Léger, at the Kimbell Art Museum in Fort Worth. Photo by June Naylor

Known for its Western heritage and collection of world-class museums, Fort Worth boasts a hefty roster of public sculpture and murals. Add in the city’s characteristically sunny and crisp winter weather—along with our collective quest for outdoor activities during the pandemic—and you’ve got the makings for an enlightening self-guided tour. To that end, I’ve highlighted 10 of my favorite outdoors artworks in my hometown, although this collection is only a microcosm of the city’s vast selection. Make sure your phones are powered up; the selfie options are endless.

The city’s Cultural District is a logical place to start with its several museums, each with its own collection of outdoor works. Of particular note is the colorful “Walking Flower” on the Kimbell Art Museum’s lawn, next to a beautiful fountain and reflecting pool where visitors relax and picnic. The 1952 ceramic sculpture by French artist Fernand Léger stands more than 10 feet tall and conveys a spirit of fun and movement to start your tour.

Across the street, just past a handsome bronze of the humorist Will Rogers astride his faithful horse, Soapsuds, you’ll see the Will Rogers Memorial Center Coliseum and Auditorium. Built in 1936 to celebrate the Texas Centennial, the Art Deco buildings boast exquisite tile mural friezes worn like a hatband high on the twin buildings’ edifice areas. Credited to a craftsman named Kenneth Gale whose work was overseen by local architect Herman Koeppe, the colorful ceramic tile works—each made with more than 1,600 tiles—illustrate Texas’ cultural and economic history. 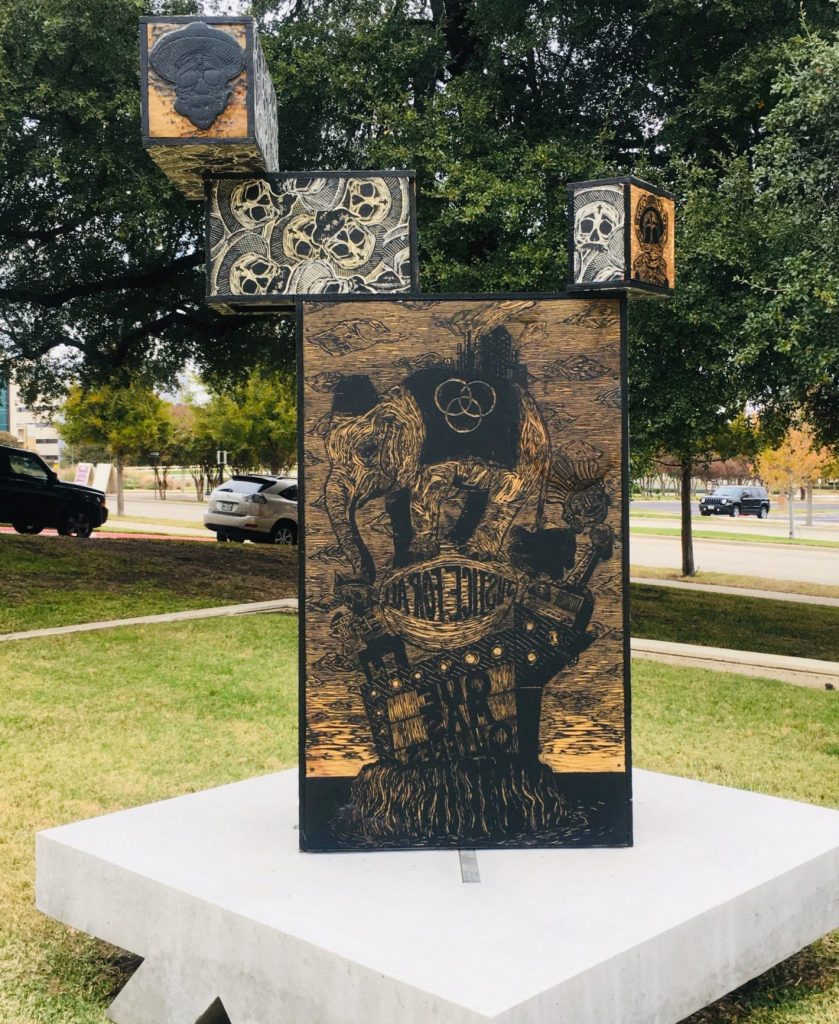 “Compacted with Care,” a sculpture by Dallas artist Ben Muñoz at the Fort Worth Community Arts Center. Photo by June Naylor.

Less than 100 yards to the west, the Fort Worth Community Arts Center boasts several artworks on its lawn. The newest installations include three concrete plinths by local artist Kris Pierce, whose 2019 sculptures were created to honor the building’s Bauhaus-style architecture. The plinths are permanent foundations for temporary works in this outdoor gallery: Now on view through July 2021, one of those works is called “Compacted with Care,” a sculpture by Dallas artist Ben Muñoz. Resembling the building blocks his kids play with, the assemblage is made from the artist’s woodcut blocks; look closely and you’ll see images on the blocks that include skulls, a Longhorn, and an elephant.

A one-block walk to the south, outside the Fort Worth Museum of Science and History, find a bronze sculpture garden that honors beloved Dr. Seuss stories. Favorite characters you can sidle up to include those from the Cat in the Hat, Green Eggs & Ham, Horton Hears a Who, The Grinch Who Stole Christmas, and The Lorax. 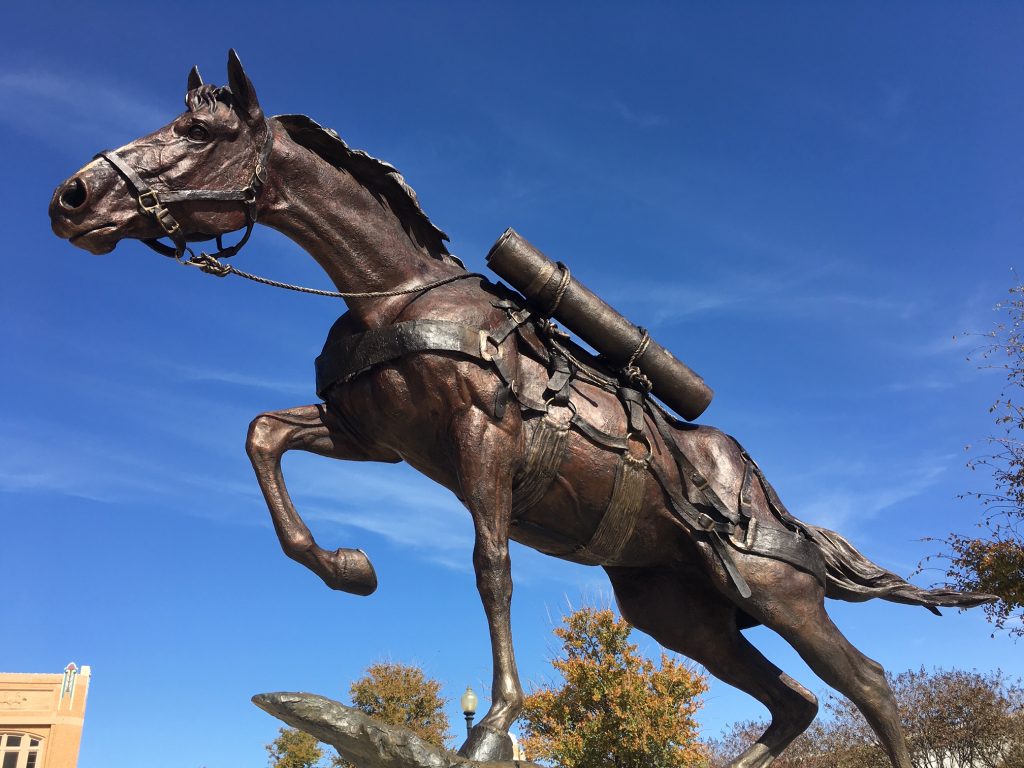 Just another two blocks south, one of the most famous horses in American history is immortalized outside The National Cowgirl Museum and Hall of Fame in Alice Walton Cowgirl Park. “Sergeant Reckless” honors the horse bearing that name, a mare known as the most decorated war horse in modern history. The horse held official rank and served in combat during the Korean War, carrying ammunition and saving lives. Dramatic and awe-inspiring, this life-size bronze is a copy of the original that stands at the National Museum of the Marine Corps in Quantico, Virginia.

It’s only a quick stroll south a block to Fort Worth Botanic Garden, where a profusion of sculpture mingles with nature. Some are art from the realism vein, such as the giant frog in mid-leap over a reflecting pool, while others are more abstract, like the seven-piece series in granite and terrazzo called “Pollen.” Created by Fort Worth artist and art professor Cam Schoepp, these are scattered through a grove of live oaks at the entrance to the garden and the Botanic Research Institute of Texas.

Particularly on Fort Worth’s reinvigorating Near Southside, you’ll find an ever-growing number of murals. The sides of restored (and some new) commercial and residential buildings provide massive canvases for local artists to tell dramatic stories in bold colors. Most, if not all, relate to social and cultural issues in the current consciousness. A newer one pertaining to family comes from a series by local muralist Jay Wilkinson. Called You’ll Never Walk Alone, the concept was inspired by the isolation people have suffered during the pandemic and looks at overcoming difficulties with the hope for togetherness to come. Wilkinson’s collaboration with local photographer Diana Urbina finds a portrait of Diana’s mom and grandmothers having a silly moment on a recent afternoon, holding up sliced kiwis to their eyes. 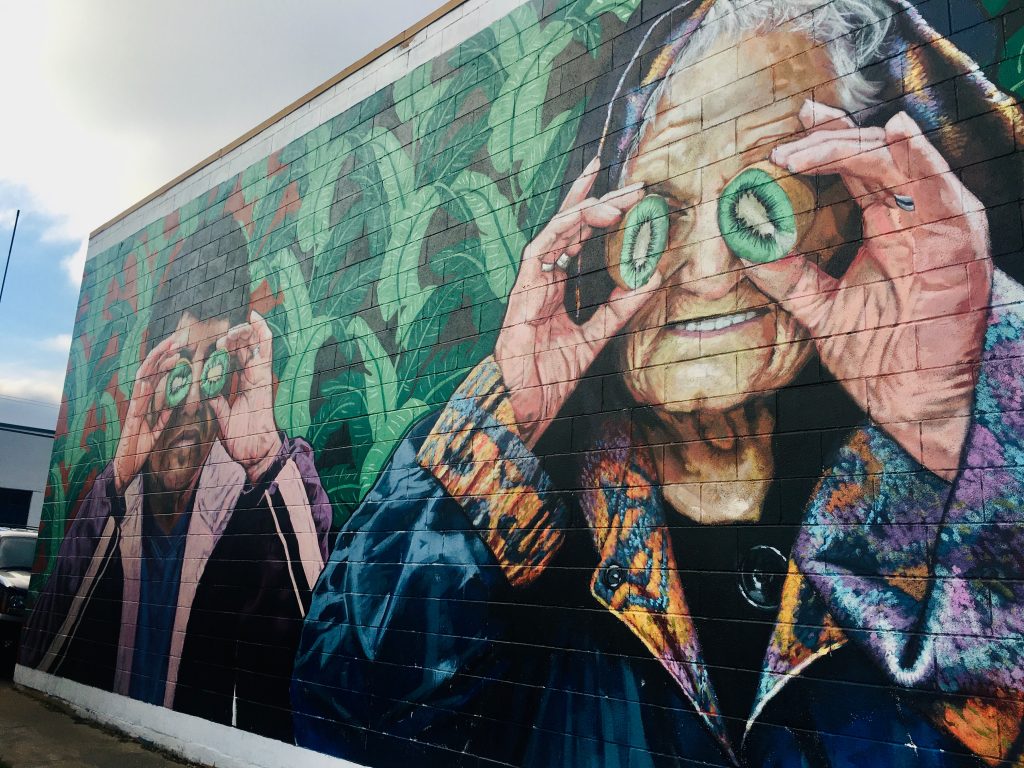 This mural on Fort Worth’s Southside is a collaboration between muralist Jay Wilkinson and photographer Diana Urbina. Photo by June Naylor

Count on finding powerful artworks reside outside Fort Worth’s fire stations. Commissioned by the Fort Worth Public Art Program, these include a wide variety of sculptures and murals, each bearing a message the artist derived from spending time in residence with on-duty firefighters. At Fire Station No. 42 in Burleson, artist Shawn Smith created an artwork in 2019 he named “Burning Bright,” a pixelated panther sculpture composed of small, colorful pieces of powder-coated steel that form a long image of a big cat wrapping the corner of the building. The speed and purpose of the animal’s motion reflects that of firefighters; the panther is one of Fort Worth’s longtime symbols.

Another public art commission is “Carousel,” a 2019 sculpture of painted aluminum and steel crowning a roundabout on East Rosedale Street at Mitchell Boulevard, on Fort Worth’s east side. You’ll see six huge, brightly colored parrots that pay homage to the mascot at nearby Polytechnic High School. The carousel’s dramatic look honors Jubilee Theatre, a renowned local African American theater company that began at nearby Texas Wesleyan University. Artists Jim Hirschfield and Sonya Ishii of North Carolina conceived this whimsical creation that never fails to put a smile on motorists passing by.

The most recent commission public artwork installment called “When Air Becomes Sky” consists of three enormous stainless steel butterfly sculptures crafted by an architect-artist team called Animalis Works. In addition to size and scope, the butterflies take your breath away with thousands of embedded crystal prisms that catch sunlight to make the wings a magical sight. Found along the Northwest Community Park walking trails, these butterflies were inspired by the millions of monarchs that make an annual stop here on their migration to Mexico.

More on Fort Worth’s outdoor artworks are found at fwpublicart.org and at nearsouthsidefw.org.