For Fans of Christmas Lights, a Carriage Ride in Highland Park Is Peak Holiday Fun 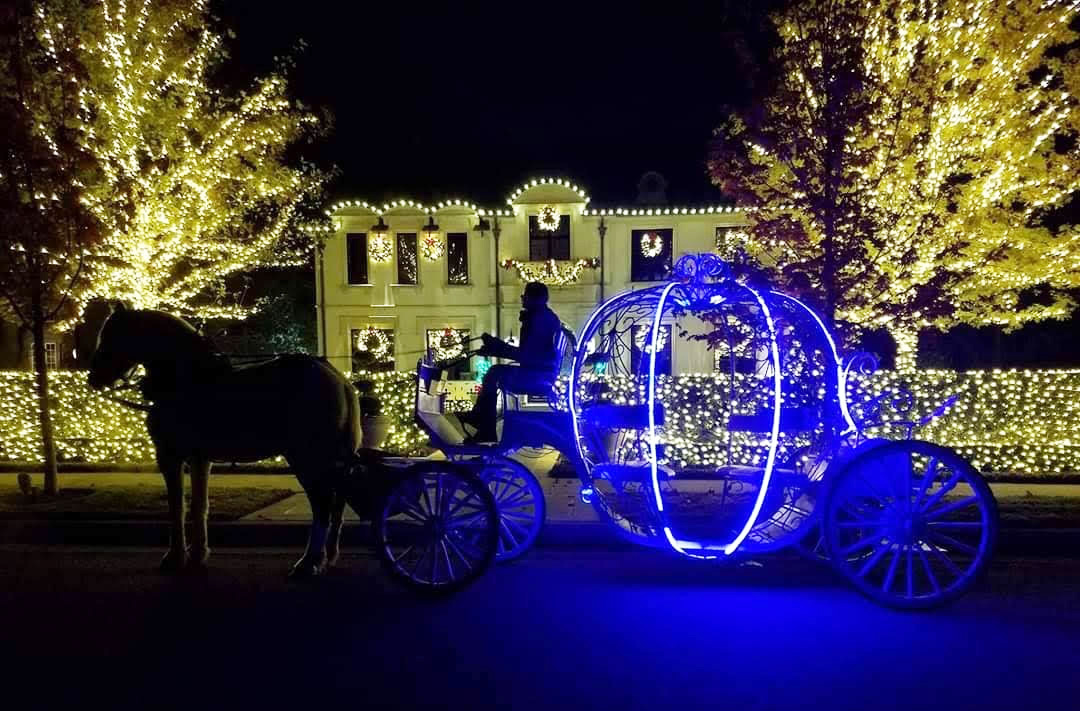 I am a Christmas lights devotee. Perhaps it’s because my father, an otherwise outstanding parent, never allowed me and my mother to festoon our suburban house in colorful lights. Inside our home, every available space held a Santa or reindeer or elf, but outside—nothing.

Then, in 2019, when a friend told me you could view the over-the-top Christmas lights of Dallas’ Highland Park from the cozy charm of a horse-drawn carriage, I jumped at the chance. Suddenly, my late-night entertainment of searching houses I can’t afford on Zillow had melded with a Christmas activity for the kids. I booked my ride online, enlisting my dear friend Katie Becker and her kids to join me and my son in some holiday cheer combined with gawking at the historic homes in one of the city’s priciest neighborhoods.

Highland Park boasts many attractions—lush tree-lined parks, a shopping village complete with Hermes and Rolex boutiques, and the fancy residences of athletes from the Mavericks and Cowboys. It also boasts some of the most expensive and notable homes in Dallas, some going for tens of millions of dollars. For example, the home at 3428 Beverly Drive, designed by Hal Thomas, graced The Dallas Morning News society pages several times in its heyday, presumably for parties held in its grand ballroom. In other words, Highland Park is the kind of neighborhood that can, and does, goes all out for Christmas.

Snuggled with family and friends in the back of a carriage, listening to the clip-clop of the horse hooves, it’s easy to pretend you’re in a Hallmark Channel movie, even if it’s an unseasonably warm night. Tracy Pratt, owner of Brazos Carriage, points out, “It’s probably the closest thing you can get to a sleigh ride in Texas.”

A self-professed “horse fanatic,” Pratt operates one of several outfits offering carriage rides through Highland Park, including DFW Carriage (Northstar Carriage) tours, Highland Park Carriage Tours, and Threejays Carriages. Pratt started her carriage career with a $500 rescue horse as a side hustle while earning her B.A. in accounting from Texas Christian University in Fort Worth. Now, Pratt runs Christmas light tours of the neighborhood from the week after Thanksgiving through the end of December, largely with horses rescued from kill pens.

Highland Park, located about 4 miles north of downtown Dallas, between Interstate 75 and the Dallas Tollway, serves as a premier destination for carriage drives in North Texas. The residents enthusiastically wrap the tiniest branches of their towering live oaks in glittering white lights, erect large inflatable Santa Clauses, and even place life-size toy nutcrackers and jack-in-the-boxes on their manicured lawns. Though the décor may change year to year, the tradition’s popularity has remained steady since Dallas Surrey carriages began offering holiday light tours in the 1980s, first in downtown Dallas then in Highland Park, attracted to the neighborhood’s outsized holiday cheer.

Pratt and her team have shepherded thousands of couples, families, and work colleagues through Highland Park over the years, and she is always surprised by how far they’ll come to hop in a Brazos carriage. “We have people that fly in from out of town. It’s a tradition for them,” she says. “We even have a really select set of clients that ride on Christmas Eve and Christmas Day.” 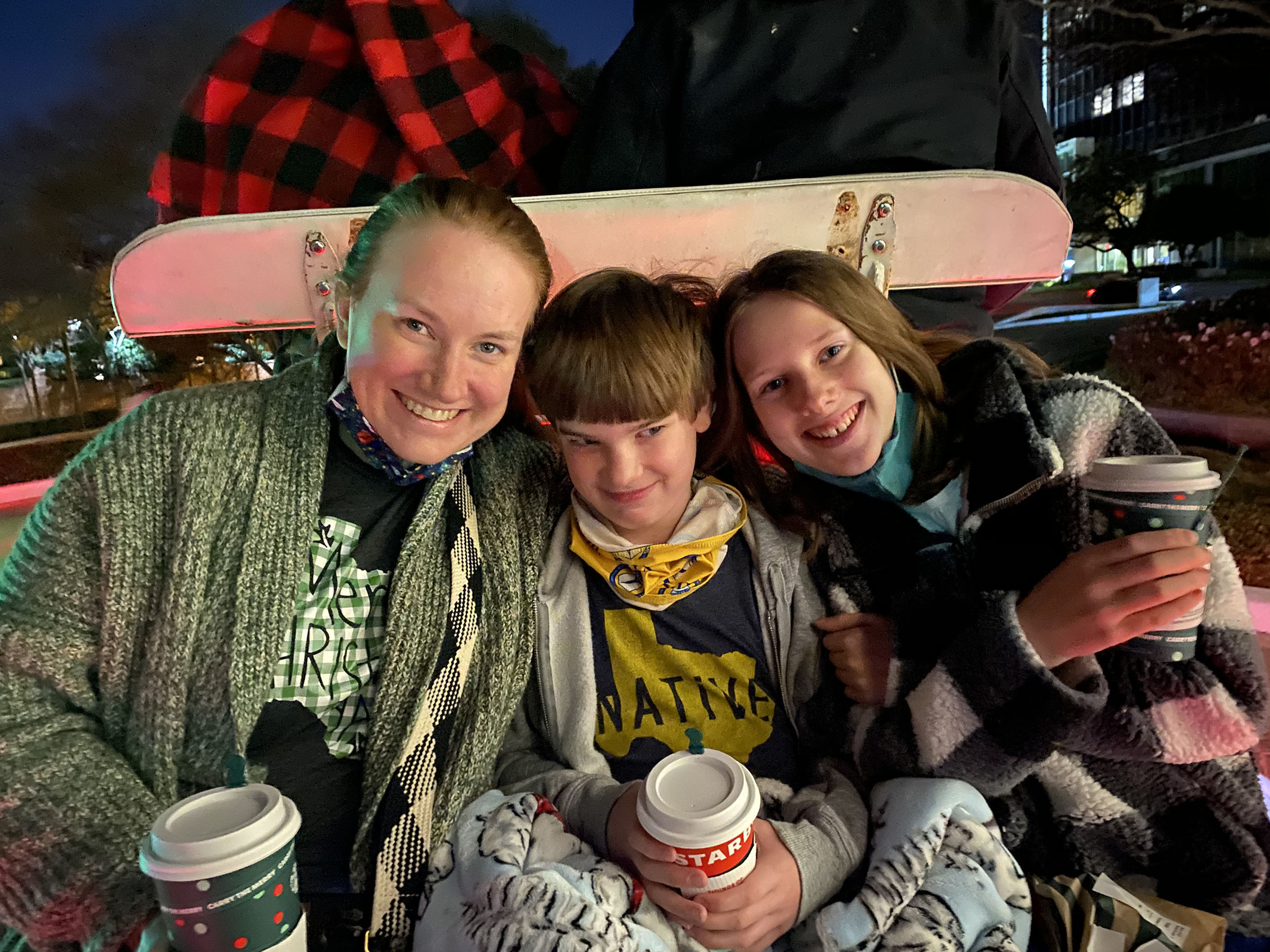 Pratt suggests you book as early as you can to get the plum time slots like Christmas Eve or Christmas Day. Rides, which last for an hour, generally occur each evening starting at 6 p.m. and run as late as 9:45 pm. Even the Highland Park residents like to get in on the carriage ride action, often booking rides themselves, waving at the carriages from the windows, or stopping by to say hello to the horses as they walk their dogs.

I took my first ride with Brazos Carriage in 2020, excited to have an outdoor activity in the midst of COVID. Since then, I’ve been hooked, calling my friend Katie in September to check dates we can bundle up the kids and engage in what has become a holiday tradition. Luckily, Katie continues to liven up the festivities. “I’ve learned to bring hot chocolate, blankets, and some cookies to make the ride even more festive,” she says.

While the kids sing along to Christmas carols playing from the carriage radio and point to particularly elaborate light displays, Katie and I like to gawk at the mansions, some of which stretch multiple blocks. Apparently, we’re not alone. “I would die to see some of the insides of these houses,” Pratt says. “They are so cool!”