Three species of turkeys trot through our state, numbering over half a million 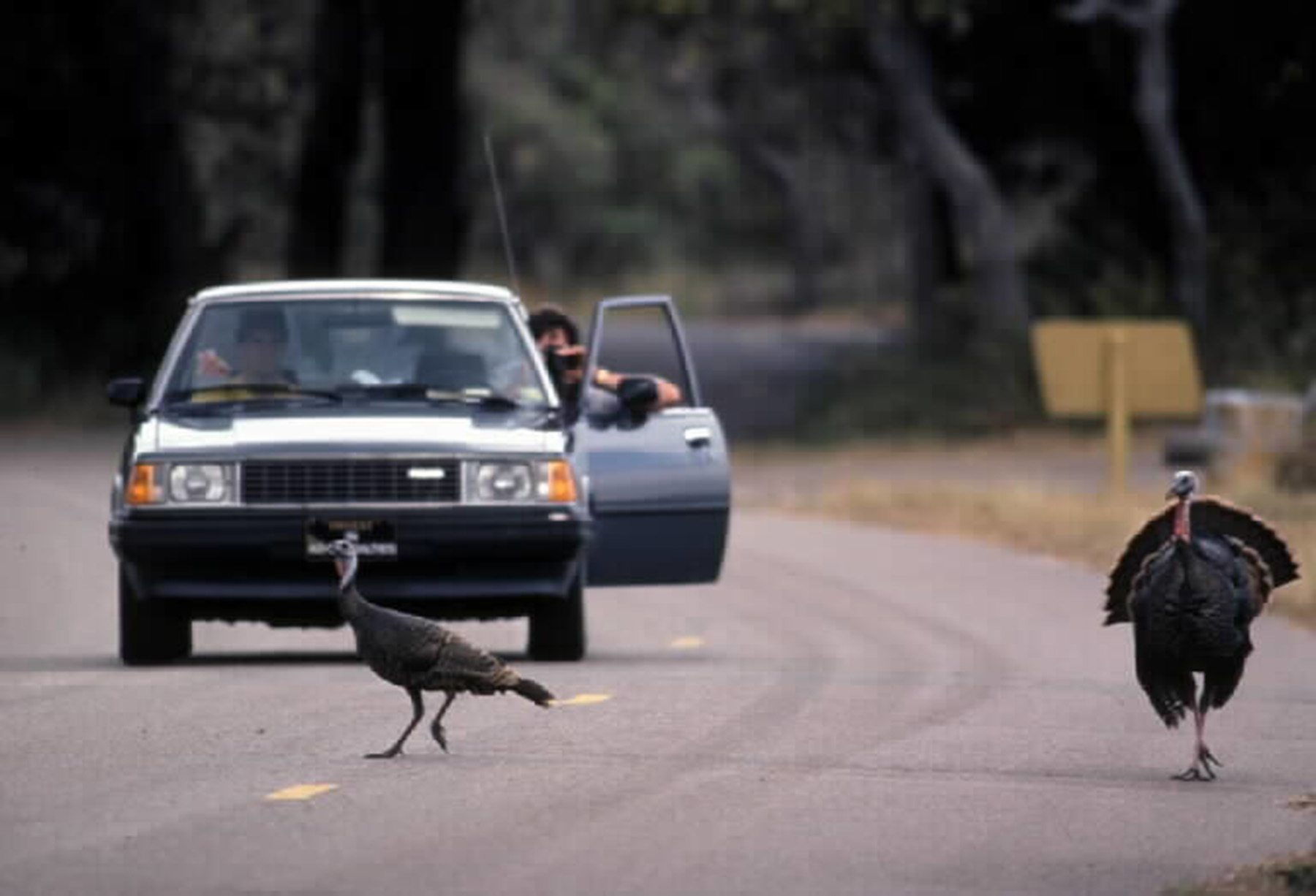 Turkeys cross the road along a scenic route within Aransas National Wildlife Refuge in 1983. Photo by Randy Green

The change comes with the cool November winds. Across Texas, the temperature begins to drop. Leaves change and drift to the forest floors. For those attuned to the changing rhythms of nature, the message is clear: It’s turkey season.

The U.S.’s largest native game bird, the North American turkey ranges across the Lower 48, scratching at the forest floor for everything from acorns to lizards. In the spring, the males hoot and gobble, stamping around pompously after females. In the winter, they appear out of the creek draws and riverine forests, gathering in larger flocks to roost against the coming winter.

This is a particularly common site in Texas, which—according to Jason Hardin, the Wild Turkey Program Leader with the Texas Parks and Wildlife Department—has one of the largest concentrations of wild turkeys in the country. Three different varieties are found in the state. A few thousand Eastern turkeys—large and dark-feathered—live in the piney woodlands and swamps of East Texas. In the Guadalupe and Davis Mountains, you might find a couple hundred Merriam’s turkey. Between them, running in a band from the Edwards Plateau to South Texas, are anywhere from 500,000-700,000 Rio Grande turkeys, a smaller, lighter-colored subspecies.

While turkeys are now a common sight across the central part of the state, the gobblers once had a brush with disaster, Hardin says. Throughout the late 1800s, unrestricted hunting and habitat destruction nearly wiped state populations out. “You were allowed to shoot a ton of birds,” Hardin says. “You could shoot them roosting, and there were no game wardens. We went from having a million turkeys in Texas to them being gone from East Texas, and almost gone from the Rio Grande range.”

In the 1930s, the Game, Fish and Horse Commission—the predecessor to TPWD—began trapping and relocating Rio Grande turkeys from their remaining strongholds, such as the King Ranch down in South Texas. The state also instituted much stricter management of turkeys, including bag limits and shorter seasons for less dense populations. The results have been dramatic: the Rio Grande turkey is now present over nearly all of its original range, Hardin said.

Efforts to get Eastern turkey numbers up are also ongoing. The state initially tried releasing pen-raised birds, which they eventually concluded didn’t work. Now, they try to relocate wild ones. “It’s been a lot tougher,” Hardin says. The landscapes have changed with development, and East Texas is at the far edge of the Eastern turkey’s range.

As a result of the state’s efforts, wild turkeys are now quite abundant—and available for hunting. The fall season throughout most of Texas began Nov. 5, and Hardin recommends using the MyTexas Hunt Harvest app, where hunters can report their kills and help the agency build a scientific data set at the same time.

If you simply want to see the Rio Grande turkey, meanwhile, the subspecies is thickest on the ground around the Edwards plateau in Central Texas. Just find a backroad that parallels a creek or river, where trees grow tall enough to make them turkey-friendly roosts. Drive it in the morning or late afternoon, and you might see the secretive birds crossing the road or foraging out in an open field, a symbol of Texas’ fall bounty—something we can all be thankful for.