A pioneer in more ways than one, Grace Jones helped make Salado what is today 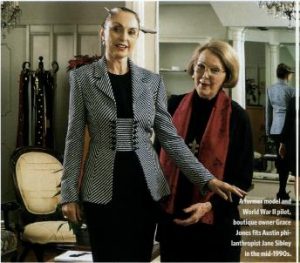 During the 1960s, most people who visited the Central Texas village of Salado were there to enjoy a relaxing break amid expansive views of gently rolling hills. However, a number of celebrities (including Gene Tierney, Loretta Young, and other Hollywood actresses) had a different goal. When these leading ladies stepped out of their personal helicopters and fancy cars, they immedi­ately made their way to fashion maven Grace Jones’ high-end clothing boutique.

Grace Rosanky Jones (1921-2008) was born in Waelder; the nearby town of Ro­sanky was named for her grandfather. When she was 15, Jones enrolled in Bay­lor University in Waco; a year later, she transferred to the University of Texas at Austin. At the beginning of World War II, Jones read an article in Look magazine zine about women pilots in the U.S. Army Air Corps and convinced her father to pay for her to take flying lessons. In her early 20s, she joined the Women Airforce Ser­vice Pilots, a division of fewer than 2,000 women who flew in noncombat missions. Even in the cockpit, Jones always made sure to look her best. Once, when she landed unannounced at a Florida airbase, a security detail ran out to meet her. Jones walked down the stairs from her plane in a pair of pumps with her blonde hair flowing from under her flight helmet. Soon after, she married the base’s captain, Lt. Col. Jack Jones.

Military runways weren’t the only run­ways she had her eyes on. After the war ended, Jones started a modeling career in New York City. Too petite for high-fashion work, she began acting in commercials, including some for Ford Motor Company and Spic and Span. After her husband re­tired from the U.S. Air Force, Jones agreed o move back to Texas on the condition that she could open her own boutique.

“Grace Jones of Salado” opened its doors in 1962, eventually offering cou­ture lines from famous labels including Geoffrey Beene, Valentino, Dior, Bill Blass, and Carolina Herrera Browsing was nor­mally not an option in the store. Custom­ers were whisked to a spacious, private room upstairs outfitted with chandeliers, mirrors, and a large, wooden platform. The staff brought in clothes they believed would be best for their clients’ body shapes and images. Other employees brought tea and carried packages to the car. Jones also stationed someone downstairs to enter­tain the numerous passers-by who wanted to get a glimpse of the famous Grace Jones and her retail operation.

Nancy Light, Jones’ assistant for sev­eral years in the 1980s, recalls Jones returning from market after a hunt for a coat for Austin socialite Jane Sibley and saying, “Jane Sibley is not going to get a coat. There are no good coats this year. She will have to wait until next year!” Light says, “That’s how dedi­cated to her cus­tomers she was. About 50 percent of them would call her before they went out, to have her check their outfits.”

“Her endorsement was everything,” says Carolyn Williams, who owns a shop in Salado called Gregory’s, a high-end jew­elry boutique that opened in 1977, when there were only a handful of antiques stores and art galleries in town. “I aspired to have a high-end store like Grace:’ she continues. Fifteen years after her store opened, Williams got that endorsement: Jones approached her at a Christmas party and said, ”You have made it.”

Although Jones often mingled with fashion royalty and other celebri­ties (Lady Bird Johnson, Liz Carpen­ter, and Erma Bombeck were custom­ers), Light recalls that ordinary things pleased Jones. One of her dreams was to open up a hamburger joint in Salado, al­though this never happened. “She loved cowboys and simple things:’ says Light. She adds that Jones never served hors d’oeuvres at parties and frequently ate black-eyed peas and cornbread. Her wardrobe consisted mostly of a neutral palette, except for accessories.

Even after Jones’ retirement in 2000, she always dressed for the day, and her fashion sense continued to influence the village’s style. Residents often recall times when they “double-checked” what they were wearing upon chance meet­ings with Jones. “Grace set the image for Salado,” says Light. “She was Salado.”