Wide-open skies (and possibilities) in Lubbock 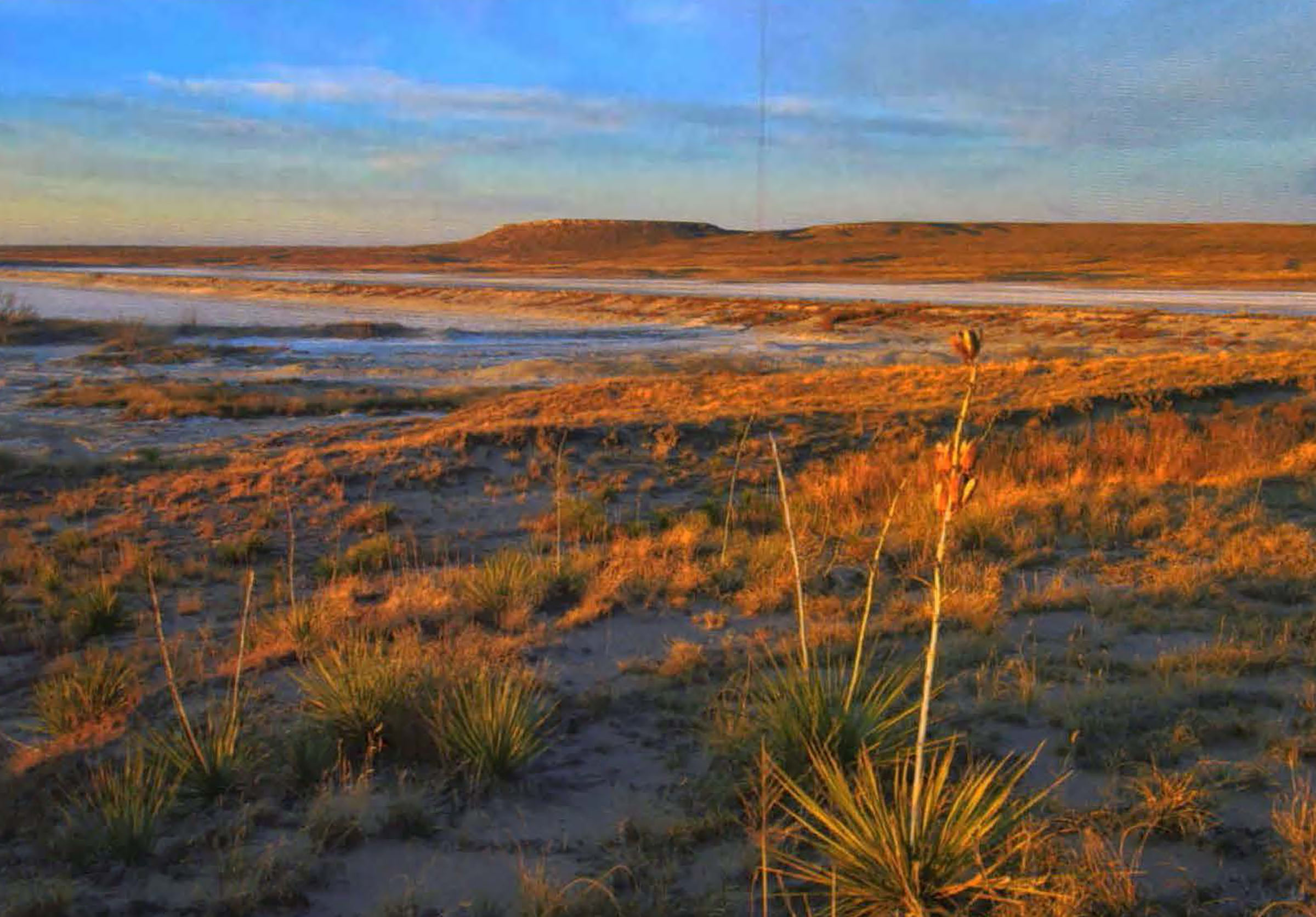 Established in 1935 to provide habitat for migratory birds and other wildlife, Muleshoe National Wildlife Refuge lies 60 miles northwest of Lubbock. Overnight camping is allowed near the refuge’s headquarters.

The sky in Lubbock sprawls from horizon to horizon, soaring overhead like the sandhill cranes that pass through twice a year. The wind ruffling my hair has met scarcely an impediment as it traveled the length of the country, and it carries the scent of thousands of fresh, fertile miles.

Lubbock pins the southern end of Texas’ Great Plains, holding it fast to the rest of Texas. People here work hard to make a living, but my weekend visit proved they appreciate playing hard, too.

Upon arrival, I checked in to the styl­ish, 15-story Overton Hotel, one of the city’s highest buildings, which meant a great view from my room window. The large and leathery lobby furniture evokes a Western spirit, and the downstairs bar has an outdoor patio, the better to enjoy those big skies. The Overton’s Pecan Grill menu listed tempting dishes such as rabbit loin wrapped in jalapeño bacon, sweet-tea-brined Cornish game hens, quail, antelope, and wild boar, but I had arranged to meet friends for dinner a few miles west of town at Cagle Steaks.

The only steak served at this family-­owned, Old West-style restaurant is the ribeye, which comes from the center of the rib roast and is prized for its mar­bling and flavor. Owner John Cagle tells me that his cooks season the steaks with a secret-recipe spice mixture and then grill them over mesquite. The result is a juicy, melt-in-your-mouth flavor explo­sion. But the menu here offers more than ribeyes: Diners can also choose grilled chicken, salmon, fajitas, and bar­becue plates, which come with a buf­fet of beans, potato salad, cole slaw, and cornbread. Throw in peach or cherry cobbler, and you may not need to eat for a week. A full stomach and luxurious bed had me out like a light that night-all the better to get an early start on adventures the next morning.

The campus of Texas Tech University starts just a block from the Overton. One of its main attractions, the Museum of Texas Tech University, includes a gallery of South­west Indian Art, plus an extensive ex­hibit called The Ice Age on the South­ern Plains, which includes two murals depicting plant and animal life, dinosaur and phytosaur bones, and skeletal casts.

At the National Ranching Heritage Center next door the real action is out­side. Spread across 27 acres, a total of 48 authentic structures re-create ranch life and history from the late 1780s through the 1950s. A dugout, bunkhouse, one-room schoolhouse, barns, blacksmith shop, ranch homes, train depot, windmills, livestock pens, stables, and cookhouse scatter among grass-covered hills dotted with sotol, mes­quite trees, and the occasional jackrabbit With the right point of view, I could imag­ine I’d gone back in time. 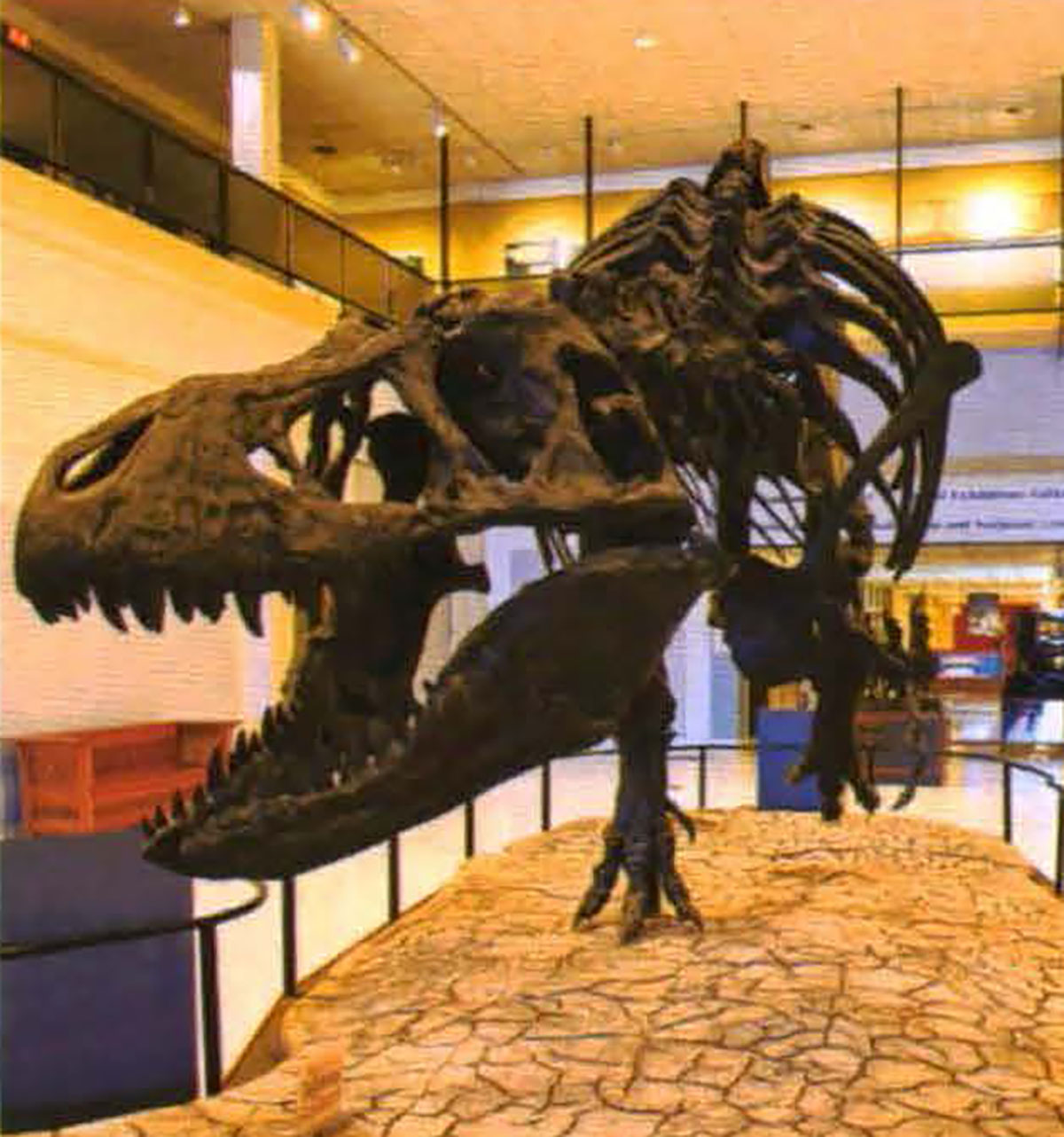 In the main gallery of the Museum of Texas Tech University, visitors encounter a faceoff between T. Rex (shown) and Triceratops.

A little more than a mile north, Lub­bock Lake Land mark, an archeological preserve of the Museum of Texas

Tech University, contains a complete cultural record from the Clovis period (roughly U,000 years ago) through the present. Several trails crisscross the property, each focusing o a theme: archeology, natural history, and nature. Archeologi­cal digs here have uncovered bison kills from more than 10,000 years ago, along with the remains of mammoths, ancient stone tools and pottery, and artifacts from early Anglo-American settlers. As I walked in a draw once filled by ancient springs, knowing that the ground beneath my feet contained traces of the humans who had lived here, I felt both serene and disconcerted.

Just as humans found the area hos­pitable, so do creatures such as prairie dogs. Some 60 miles northwest of town, Muleshoe National Wildlife Refuge, whose saline lakes draw thousands of sandhill cranes in winter and many other birds year-round, harbors a robust prai­rie dog community. Check it out from the road near the refuge’s Paul’s Lake; bring binoculars for a close look. 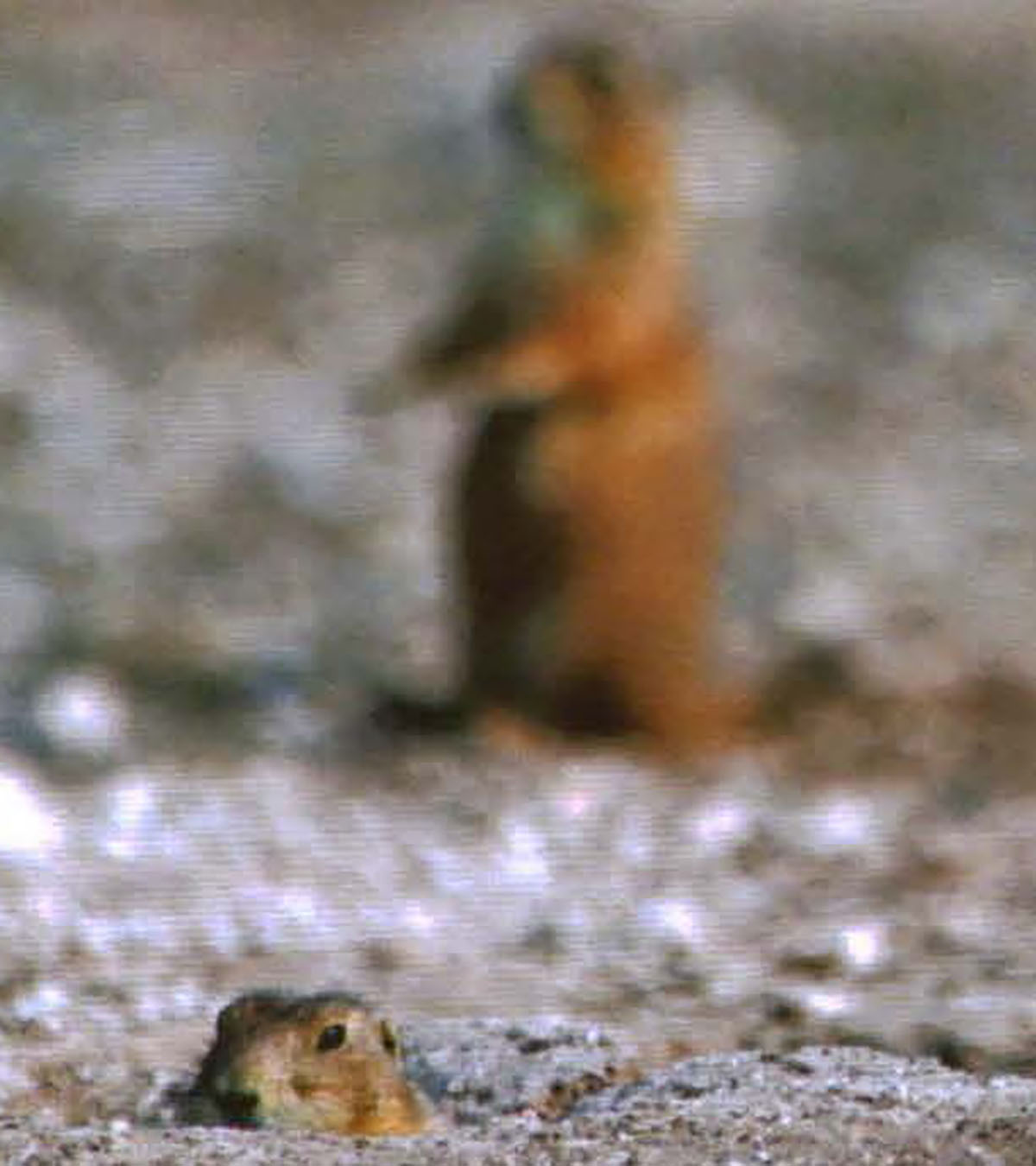 I also enjoyed watching the antics of prai­rie dogs near downtown Lubbock at Prai­rie Dog Town in Mackenzie Park, estab­lished in the 1930s by resident Kennedy Clapp, who feared the entertaining ani­mals were disappearing. I hopped out of my car and watched the plump, furry crit­ters—not actually dogs, of course, but rodents closely related to ground squirrels—­zip in and out of their burrows, yip, and stand upright as if posing for photos. Prai­rie dog burrows provide habitat for owls, homed lizards, rabbits, and hares, and the little fellows may help preserve grasslands by reducing the spread of brush.

Grapes like it here as well. In fact, the area’s grape-friendly climate and soil earned designation as The High Plains American Viticultural Area, one of eight appellations in Texas, and it produces many award-winning wines. I grabbed a spot at the stainless-steel bar of McPher­son Cellars’ tasting room, in a former Coca-­Cola bottling plant, to try some for myself. Owner Kim McPherson’s father, Clinton A. ”Doc” McPherson, co-founded Llano Estacado Winery in 1976, one of Texas’ first post-Prohibition wineries. McPherson Cellars debuted in 2000, and this tasting room opened in 2008. McPher­son’s Viognier, Sangiovese, and DBS (a blend of Dolcetto, Barbera, and Sangiovese grapes) won my top votes. 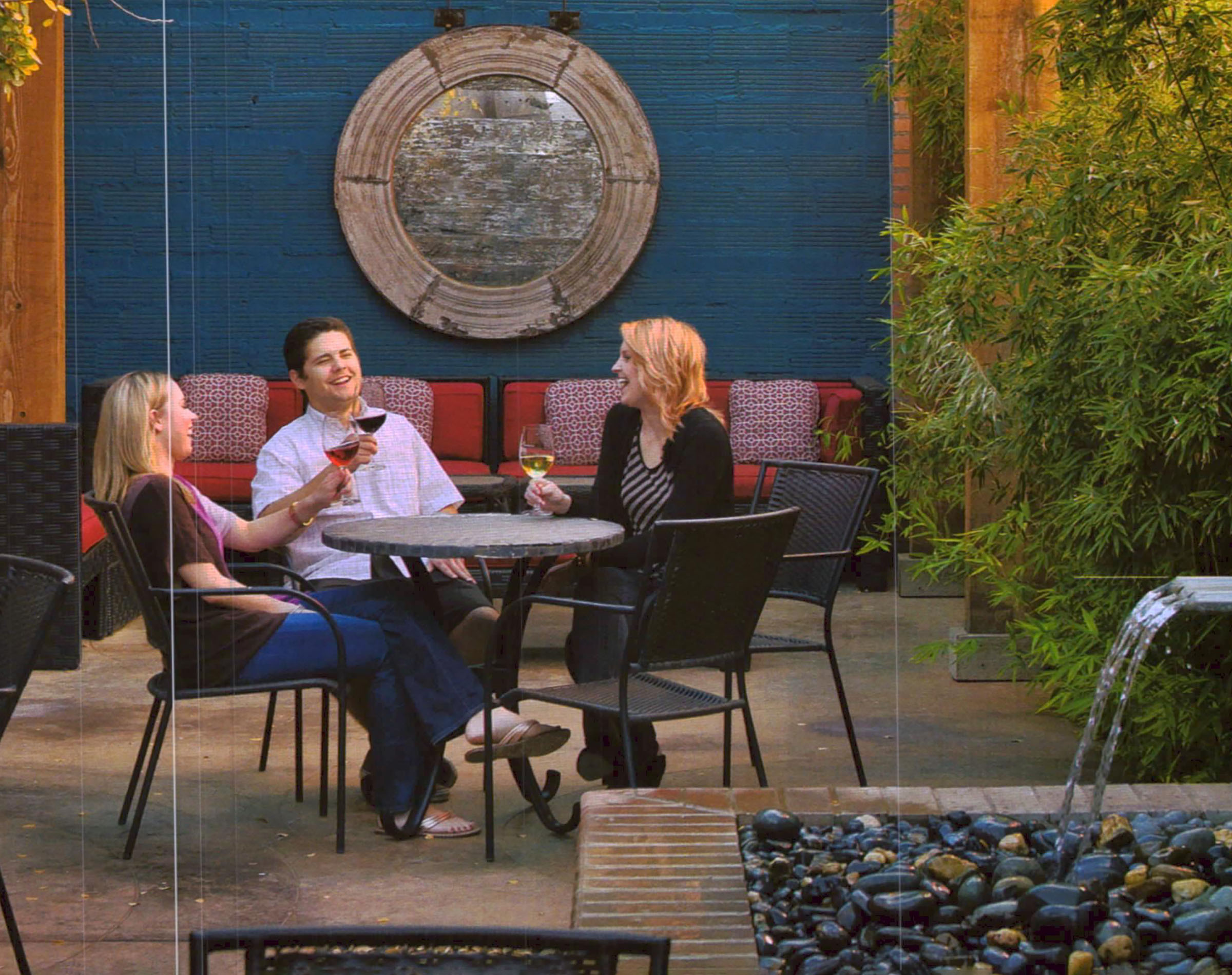 A former Coca-Cola bottling plant now houses Lubbock’s award-winning MacPherson Cellars, a winery that offers daily tastings of up to five wines for $5.

Located about 10 minutes from my hotel-which counts as ”way out” in Lubbock-the Funky Door Bistro & Wine Room does, indeed, have a funky, sculpted-metal door. It also has fondue, pasta, burgers, live music, and an exten­sive wine list that includes 48 available by the glass from a European Enomatic “self-serve” machine. I ordered a glass the old-fashioned way and enjoyed a robust Malbec to accompany my fettuc­cine with prosciutto and peas.

As the child of a World War II B-25 pilot, I’m always drawn to military war museums, so I stopped by the Silent Wings Museum in the original Lubbock airport terminal, which tells the story of the WWII glider pilot program. Roughly 80 percent of American glider pilots received their silver wings here at the South Plains Army Air Field, the precursor to the Lubbock Inter­national Airport. The museum has several gliders on display in a tall, glass-walled room overlooking the airport, along with exhibits on operations in which gliders par­ticipated, including the Normandy land­ing. Here, too, is a wealth of period pho­tos, uniforms, weapons, flags, and banners.

I had time for one more stop. Should I make it the Buddy Holly Center, Ameri­can Wind Power Center, an apple orchard, or one of the area’s four other wineries? I knew I’d have to make another visit And so before I moved on, I stood for a few more moments, taking in the wide, blue sky and feeling the wind in my hair.