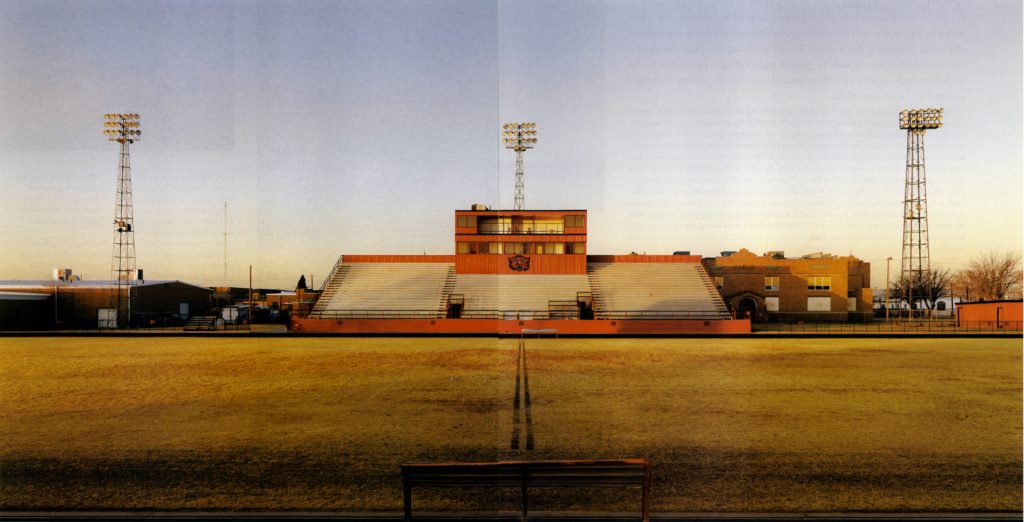 “When 1was in junior high, Wink was playing Pecos and the teams got into a big fight. I took out that way. But then my dad said,’Stay put.’Someone called the fire department, which came out and hosed everybody down.” -Lillian Horner

As a photographer, I am compelled to document  and reserve for posterity both the things that interest me and the things that I feel have an impact on the larger landscape of modern culture. In our society, football is a pursuit that is rife with meaning, both overt and obscure. It is easy to discount the importance of what is, in essence, just a game. To do that, however, is to overlook the cultural significance of sports in general, and football in particular. In the intricacies and eccentricities of human endeavors, rarely is there an undertaking that is truly superficial.

Texas high school football has alternately been presented as a noble pursuit and as the apogee of excess. It has been aggrandized to the point of hyperbole in television, motion pictures, and print. The idea of the football stadium as a house of worship is a shopworn metaphor, but one that lives on because it is close enough to reality to remain eerily and sometimes comically plausible. In truth, each community has its own relationship to the game and to the cultural phenomenon it embodies. That relationship manifests itself in many ways, from the color of the uniforms, to the choice of mascot, right down to the playing surface. The stadium, however, has become a particularly special expression of how a community as a whole feels about the game and, oftentimes, how it feels about itself. It is a specialized architecture, meant for only one purpose. It is a structure that is revered in a way that most will never be. In many ways it is a community gathering place, on a par with the drive-in on Saturday nights or the corner coffee shop. It is a place to congregate, to exchange thoughts and ideas, and, most importantly, to experience a kind of camaraderie unavailable, and possibly even frowned upon, in any other venue.

The promise of an empty football field is an irresistible force for those who understand and revere the game. It represents a blank canvas begging to be painted with the varied sights and sounds of youthful action and enthusiasm. Covering a cross section of social, economic, and geographic criteria, the photographs in this book represent a small but varied sample of stadiums across the state. By surveying the stadiums in winter repose, after the season has run its course and the crowds have filed out, we as viewers are privy to a quieter and more contemplative side of the subject that is seldom revealed to the casual observer. Presenting the home stands of each stadium from the same vantage point on the 50-yard line allows the viewer to see them as equals, regardless of their position in any hierarchy. Looking at these photographs, we can experience these places that hold so much collective memory in a state they were not meant to be seen in: as potential, rather than kinetic, energy. Far removed from their normal state of intense dynamism, they become cultural artifacts to be puzzled over for their quirks and appreciated for their ability to offer us a window into the hearts of those responsible for them.

Any fan, however jaded, would be hard-pressed to stand in the middle of a West Texas football field at dawn and not be moved. The relative innocence of the game in high school keeps the sport grounded in a way that it can never be at the collegiate and professional levels. The banners of butcher paper exhorting players to excel, the colorful images of mascots crafted from plastic cups stuck in chain-link fences, and the grass trampled by hundreds of pairs of cleats tell the story of a season. The meaning of something as basic as one hundred yards and a pair of goalposts can easily be clouded by the introduction of money and the expectation of profits that inevitably follows. But for the time being—as captured in these photographs—it is simple and pure, like a perfect spiral arcing gracefully across the sky.

“Our stadium was built for flood control and is affectionately known as ‘The Pit.’ {flooding) doesn’t happen very often as we’re ‘The Cactus Capital of Texas.’ Four or five years ago, we had a heavy rain and the newspaper ran a photo of kids swimming back and forth between the 40-yard lines.” -Beverly Farley Choate

“The stadium was originally built for eight-man football, which used an 80-yard field. When we switched to 11-man, we had to add 20 yards to the field. Now, the bleachers are centered on the 30 to 35 yard line, not the SO.” – Martin Martinez