To support their hometown hero, Whitehouse, pop. 8,000, designates Friday "Chiefs Day" as it paints the town red and gold 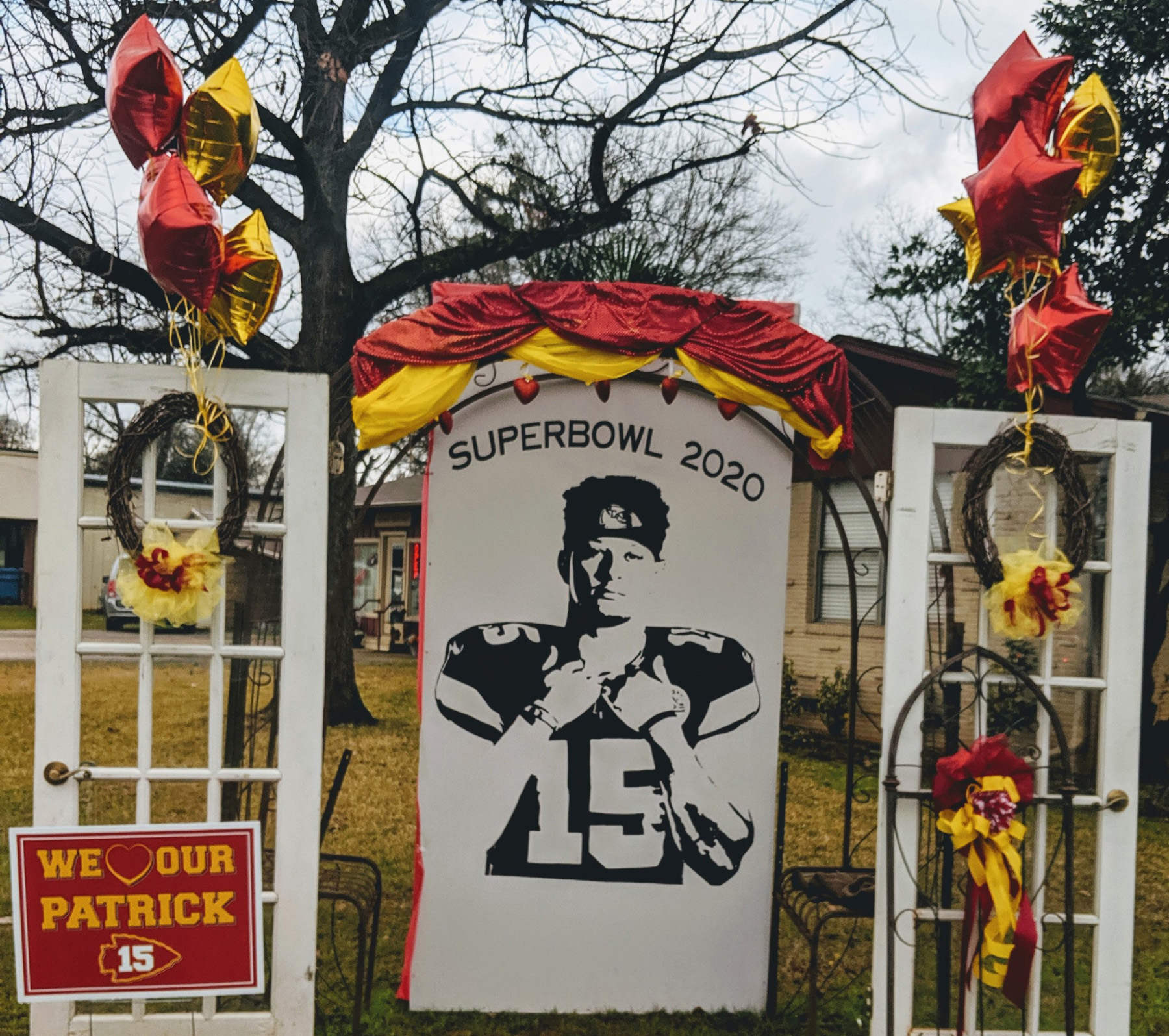 The East Texas town of Whitehouse is about 10 miles south of Tyler, but in the weeks leading up to the Super Bowl, it is looking more like a suburb of Kansas City. The town is so draped in red and gold colors you might think the best barbecue in town is at Arthur Bryant’s, not Ribmasters or Katie’s Old Fashion BBQ.

This traditional Dallas Cowboys stronghold has replaced the blue star with the Chiefs’ arrowhead logo because reigning Super Bowl MVP Patrick Mahomes II—whose team plays for a repeat title on Sunday in Tampa, Florida—found his love for football as a member of the Whitehouse High School Wildcats.

“Everybody dresses up their places in honor of our hometown hero,” says Gloria Munoz, co-owner of Montez Creekside Kitchen in Whitehouse. One of the most popular items on the menu is the Mahomes Hot Dog, made with pulled pork, fried egg, jalapeño, pickle, and fried onions. It might sell out on Friday, which has been designated as “Chiefs Day” in the town that has a population of about 8,000.

The adulation starts on a sign leading into town, which says “We (Heart) Our Patrick.” The love is all around for the new king of fling.

“In Whitehouse everybody knows everybody,” Munoz says. “When the Chiefs play, we’re cheering for one of our own.”

The Whitehouse Flower and Co., whose “Patrick Is Mahomie” front window design was shown on ESPN and other stations last year, has come up with a new slogan—“Home Sweet Mahomes”—in advance of this year’s Super Bowl, which pits the Chiefs against Tom Brady and the Tampa Bay Buccaneers.

“It was a little crazier last year because it was Mahomes’ first Super Bowl,” says artist Natalie Buckley, who designed a silhouette of No. 15 in the back of the flower shop. “But the orders for new signs have picked up in the last week.” 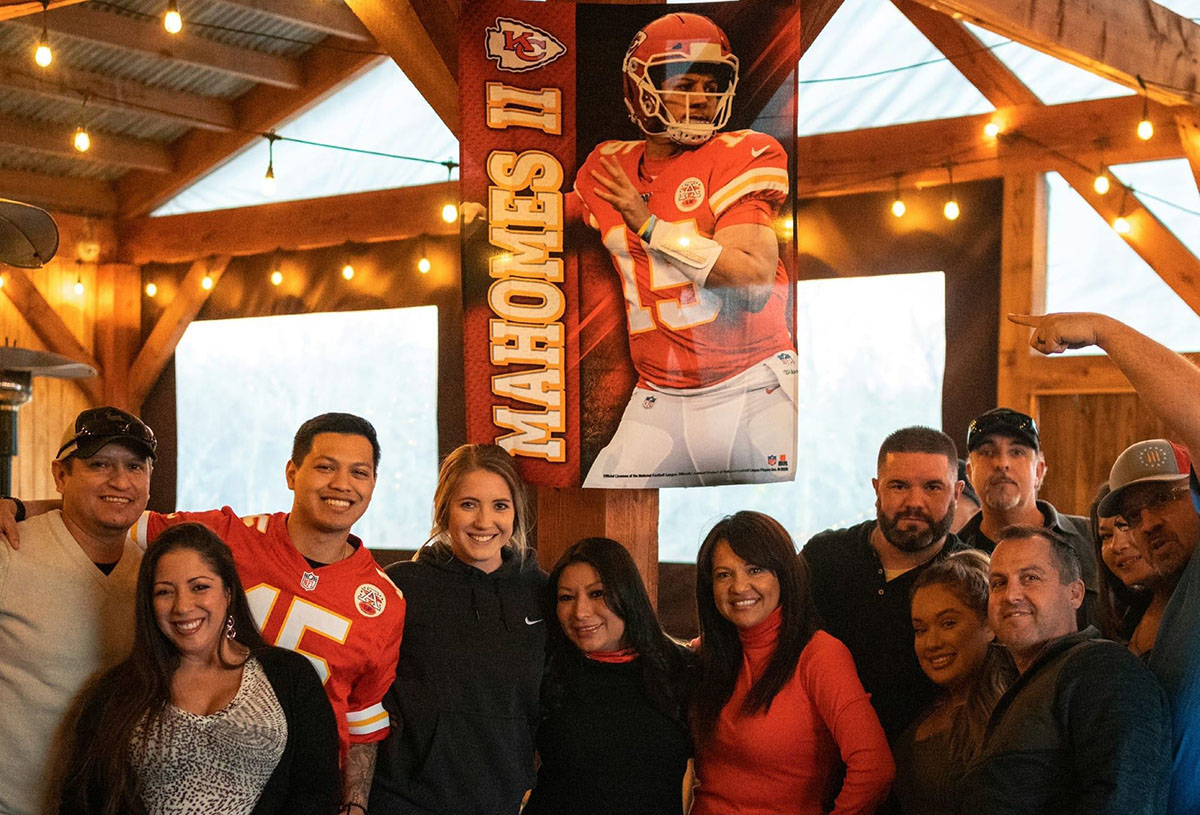 Mahomes plays for Kansas City, but also represents Whitehouse, where his mother, Randi, who graduated from nearby Troup High School, moved her family in 2005. Patrick’s father, Pat Mahomes, a former major league baseball pitcher from Lindale, and Randi divorced when Patrick was 10 and brother Jackson was 5. But both parents have been active in their kids’ lives and remain friendly.

Mahomes returns to East Texas for a couple months every year after football season to see friends and family and workout at the APEC training center in Tyler. He golfs at the Hollytree Country Club, where his mother has worked as an event planner for 15 years. “Folks here try to give him his space, that respect, but he’s such a big star,” Villapudua says. “Sometimes there’s a fuss, but he’s so good to people.”

It seemed unlikely that Smith County would ever produce another NFL legend as big as Earl Campbell, who won a Heisman Trophy playing for the University of Texas Longhorns, then brought “Love Ya Blue” frenzy to Houston Oilers fans in the late 1970s. But the accomplishments of “The Tyler Rose,” a first-ballot NFL Hall of Famer, could eventually be overshadowed by “The Whitehouse Cannon.” Mahomes’ arm strength and accuracy are two primary reasons Kansas City ended a 50-year Super Bowl drought by beating San Francisco 31- 20 in last year’s finale.

At age 25, the lightly recruited former Wildcats quarterback has set passing records during his time at Texas Tech, won the NFL Most Valuable Player award, and led his team to two Super Bowls. But Mahomes is just getting started, as evidenced by the contract he recently signed that will pay him up to $503 million over 10 years to remain a Chief.

And to think he almost chose to follow his father into Major League Baseball, with his 93 mph fastball providing a new definition of East Texas heat. Mahomes didn’t even play quarterback until his junior year of high school, when he switched from defensive back. By that time, Brady had already won three Super Bowls with New England.

Going for his seventh Super Bowl win on Sunday, the 43-year-old Brady is known as the GOAT (greatest of all time) at quarterback. But the people of Whitehouse will be cheering for the baby goat. As the signs on Main Street announce in red and gold, Patrick is their homie.