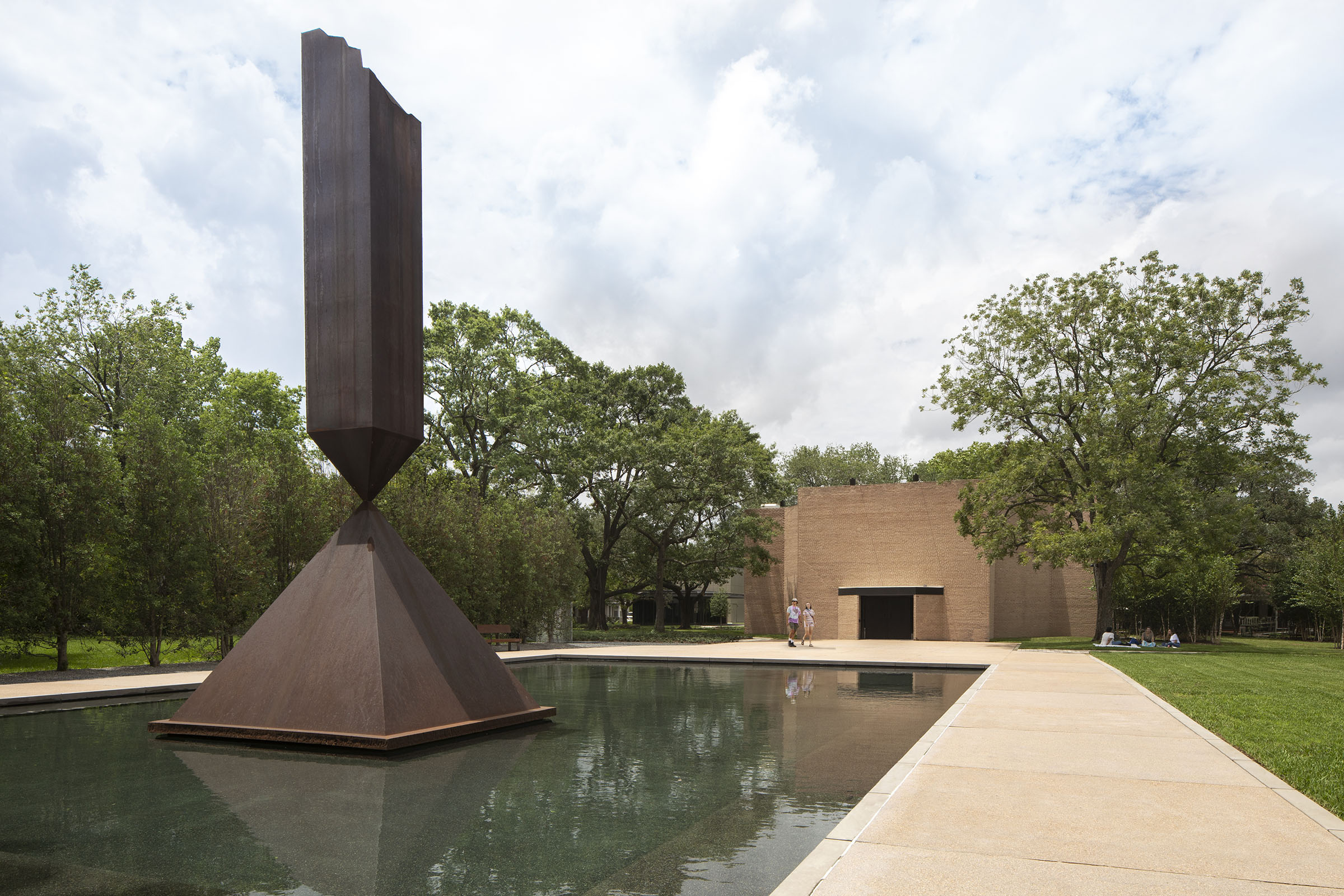 Since 1971, the nondenominational Rothko Chapel has served as a quiet oasis for contemplation amid Houston’s bustling Montrose neighborhood. The octagonal brick building, commissioned by John and Dominique de Menil and designed by architects Philip Johnson, Howard Barnstone, and Eugene Aubry, contains 14 large, dark paintings by Mark Rothko that at first glance appear nearly monochromatic, but upon closer inspection reveal a variety of subtle hues.

For much of its existence, however, the chapel has struggled to capture the artist’s original intent. That has changed with the completion of the first phase of a $30 million comprehensive restoration and campus expansion project, which has enlivened the somber interior, enlarged the campus, added a new welcoming center and shop, and improved the grounds. (A second phase will include the addition of the Administration and Archives Building, a relocated guest house, a meditation garden, and a program center.)

Visitors can witness the new transformations when the chapel reopens to the public on Sept. 24. We talked with Executive Director David Leslie about what visitors can expect.

How has the chapel changed through the restoration project?
Part of Mark Rothko’s goal was to engage with the elements—the sun, clouds, seasons. When the chapel opened in 1971, it had a skylight, but the light was too intense and washed out the paintings. That led to a series of interventions, like baffles and scrims, to cover the skylight and mute the light. In 2000, glass partitions were added in the entryway foyer to reduce humidity levels inside. During the restoration, overseen by Architecture Research Office with lighting design firm George Sexton Associates, we restored the chapel architecturally and existentially back to what Rothko had intended. The partitions have been removed from the foyer, and there’s a skylight with louvres and a very light scrim. There’s really not much distance between you and the sky and the clouds. Through this process, light transforms the interior space of the sanctuary and gives a new appreciation for Rothko’s art. You can see the brushstrokes.

What are some of the changes to the grounds?
Visitors will see a lot of changes to the grounds, which have been redesigned by Nelson Byrd Woltz Landscape Architects. There used to be bamboo around the reflecting pool, and now there’s Savannah holly. Trees for Houston donated 13 oak trees that are being planted along the perimeter. There is a grove of river birches, benches scattered across the lawn, and places for meditation and picnics. 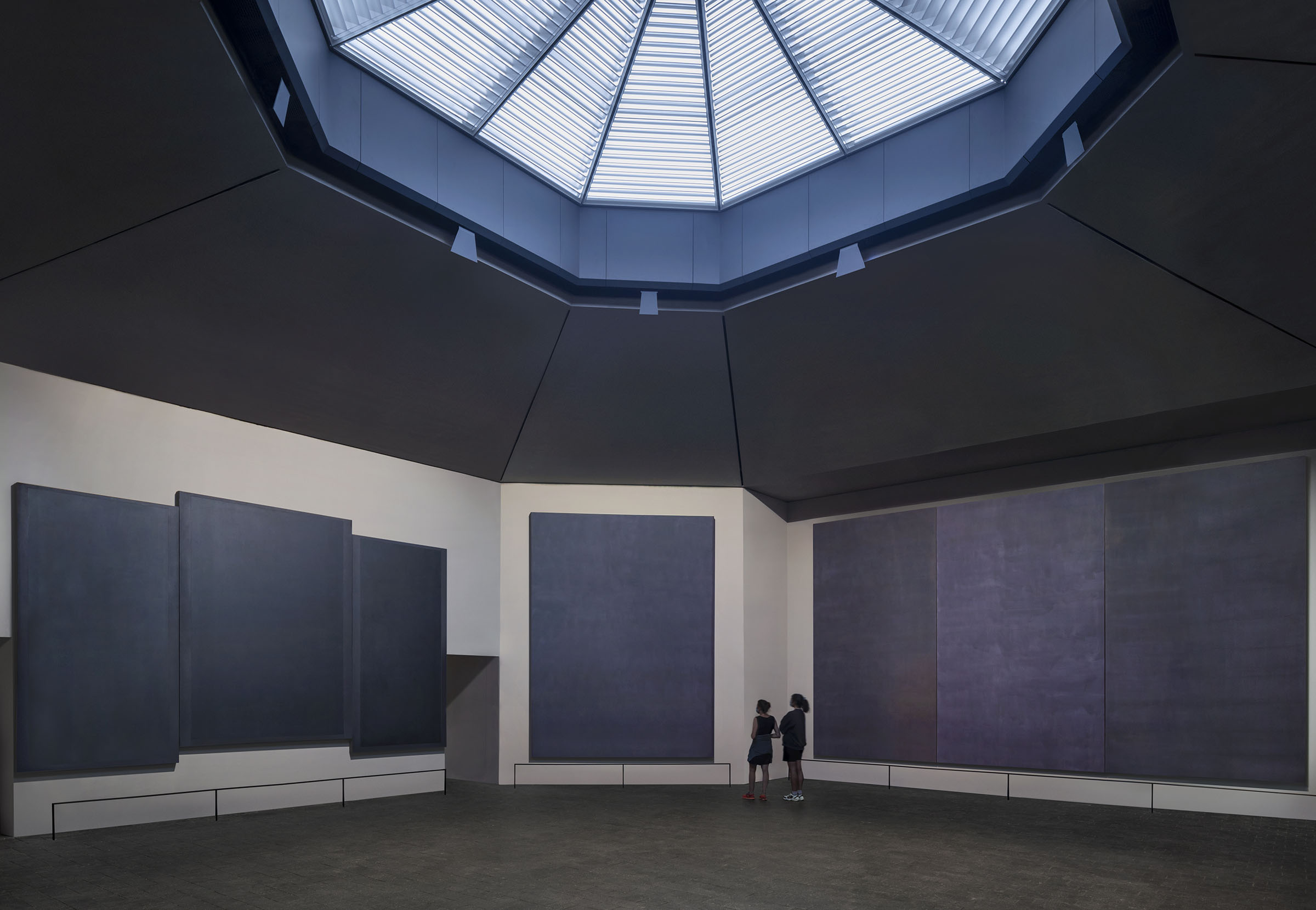 What are the new protocols for visiting the chapel?
We’re going to a timed-ticketed system, with a limited number of people per 30-minute session. It will still be free, but you’ll have to make an online reservation. Normally, the chapel is open seven days a week from 10 a.m. to 6 p.m., but we’re going to have a shorter week and shorter hours [Wednesday to Sunday, 11 a.m. to 4 p.m.]. We’ll have safety protocols, and you’ll have to wear a mask.

In terms of programming, what does the chapel offer?
The programming has always focused on the intersection of art, spirituality, and human rights. Notable people have spoken at the chapel, like Archbishop Tutu and Nelson Mandela. We host meditations every month, and also concerts, dance performances, poetry readings, and symposia. Central to all of our interdisciplinary programming is creating understanding, relationships, and engagement across the various lines that divide us.

Next year is the chapel’s 50th anniversary. What sort of events are being planned for it?
We are planning a long weekend of celebratory events around the 50th anniversary on Feb. 26-28. We hope to have whirling dervishes perform, as well as other interfaith celebrations, a talk about the restoration of the chapel, and a re-dedication of the Broken Obelisk by artist Barnett Newman dedicated to Dr. Martin Luther King Jr. Later in the spring, we’ll also host a symposium on the contemporary state of civil rights in our country, as well as a Latvian jazz concert, in part because Rothko’s father’s family came from Latvia.

What do you hope visitors take away from their experience at the chapel?
I hope that they leave with a sense of the importance of sacred spaces like the chapel. By “sacred,” I mean something set apart from normal, day-to-day life. And how important it is for physical, mental, and spiritual health, particularly in urban areas like Houston, to have places like this to disconnect a bit from the cacophony of the city and from everyday demands. The chapel is a statement about the power of contemplation and action, about interior transformation and social transformation. Spiritual self-care is tied up in the well-being of the community, in challenging the injustices of the world. The programming at the chapel is an invitation to get involved. My hope is that it will spark people to do something to better the world.