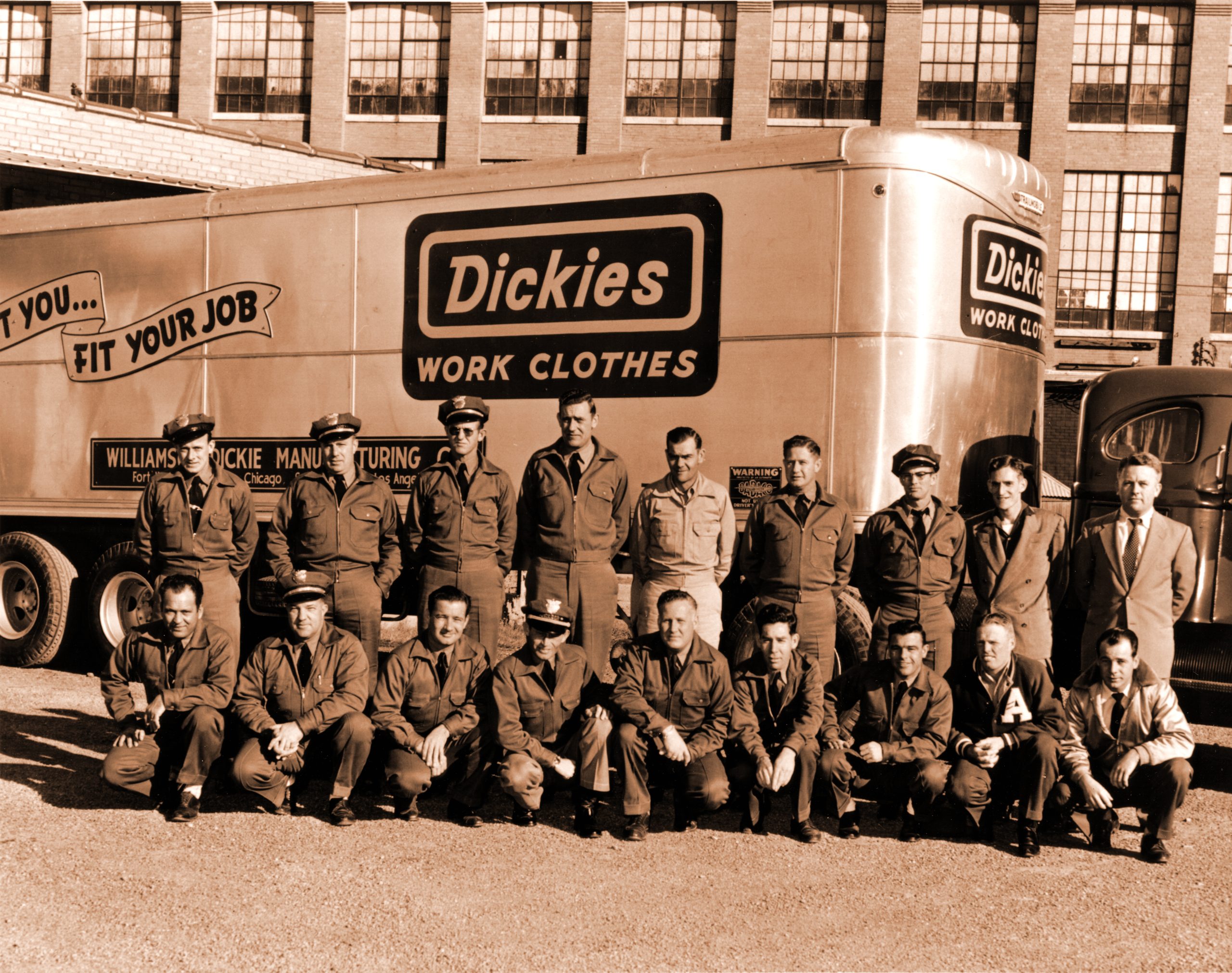 In the 1940s, American workers like these Dickies truckers, liked the work-wear company’s clothes for its functionality. Photo courtesy Dickies.

When I was growing up in and around Fort Worth, Dickies was ubiquitous. Eating biscuits and gravy on Saturdays at the Bronco Café in my then-small hometown of Mansfield, I’d watch local ranchers and farmers clad in Dickies pants and dirt-covered boots read the local paper over coffee. In high school, we’d wander the stockyards during the Fort Worth Stock Show and Rodeo to spot cute cowboys in Dickies shirts in town to compete. My son even wears Dickies blue pants as part of his school uniform. Not bad for a Texas company founded 100 years ago.

E.E. “Colonel” Dickie, C.N. Williamson, and his son C.D. Williamson started the company in 1922 in a now historic Fort Worth building. The original intent was to provide quality bib overalls for the “American worker,” and today it’s the world’s number one work apparel manufacturer.

But Dickies appeal extends far beyond farmers and mechanics. It’s a brand that’s as mainstream as it gets. Eager paparazzi snap photos of celebrities from reality TV star Kourtney Kardashian to rapper A$AP Rocky to model/author Emily Ratajkowski decked out in Dickies slacks and jumpsuits. Just this past July, the fashion website Who What Wear presented their cool girl clientele with myriad ways to style different types of Dickies pants to mimic the looks of “multiple fashion influencers and insiders.”

Dickies clothes can be found in all corners of social media. A quick search for the #Dickies hashtag on Instagram yields 1.4 million posts capturing everything from cool dudes stunting in their Dickies on bikes to blond women holding Starbucks cold brews vamping in carefully styled jumpsuits for the camera to a tattoo artist in a Dickies shirt inking a fresh tat on a man’s pale arm.

According to Annette Baker, the curator and director of the Texas Fashion Collection housed at the University of North Texas in Denton, this transformation of work clothing to trendy item is a particularly American one. 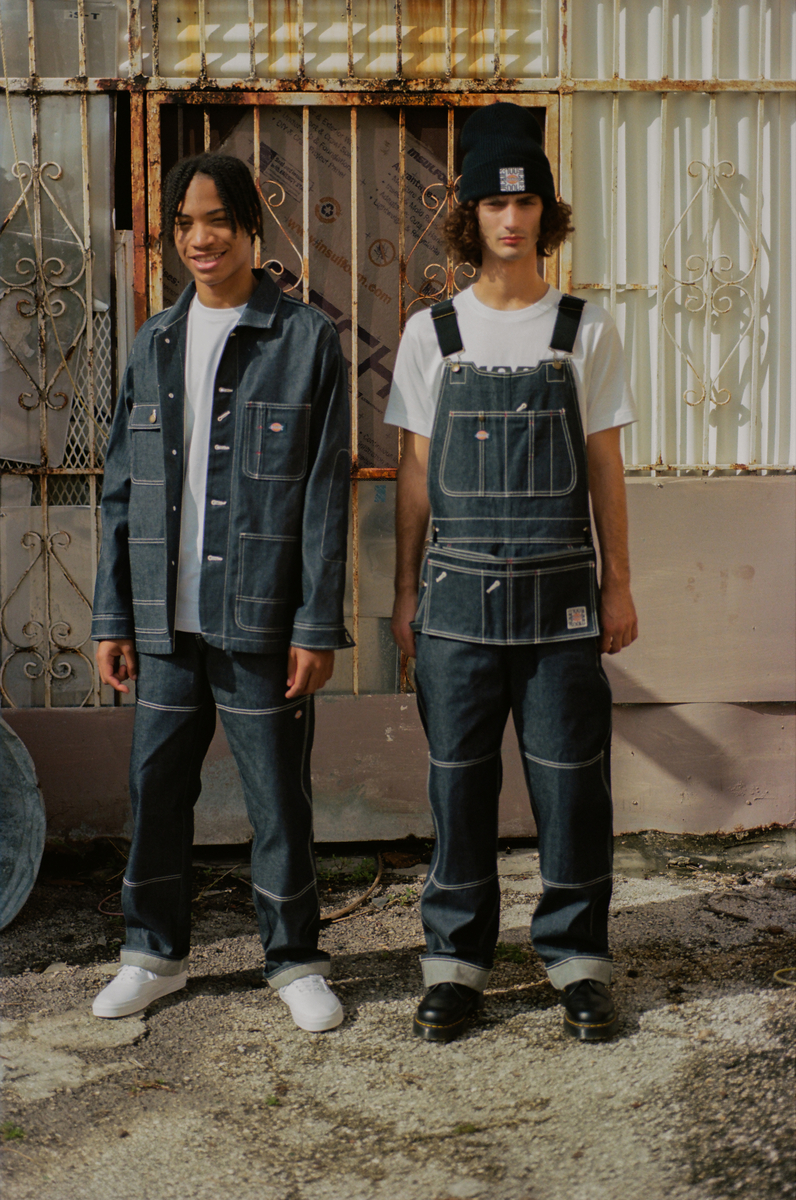 “The identity of American fashion has been so wrapped up in an idea of a work ethic and working that our clothing relates to that, even if we’re not the ones directly engaging with American soil,” Baker says. Whereas French fashion might be considered “fussy and expensive and maybe slightly overdone,” she notes that American fashion with its basis in cotton, simplicity, and functionality feels more tied to our puritanical delight in being good and useful. It’s that goodness and usability that seems to appeal to fashion icons and blue-collar workers alike. Both groups value clothes that are made well and made to last.

“Dickies can satisfy my dad doing farm chores and satisfy these people who are thinking about the ethics and sustainability behind their clothing,” Baker notes. “It’s pretty brilliant that a brand could reach both audiences in a really authentic way.”

Despite its growing appeal across cultural groups, Dickies remains a very Texas brand. “Texas holds multiplicities,” she remarks. “There is space for people wearing work wear for its original purpose and people who are more rooted and grounded in a high fashion complex. Remarkably Texas can hold both of those identities and keep them true.”

Loyal to its Texas roots and all the complexities existing therein, Dickies still has its headquarters in Fort Worth, where it launched a new venture in 2019 with Dickies Arena, a modern space boasting the Stockyards’ art-deco flair. There, you can catch a concert with a famous band, or better yet, attend the Fort Worth rodeo where well-heeled fashionistas and kids in town to compete in the stock show will likely both be wearing Dickies.

I once heard a friend joke that when he retired all he wanted was a closet full of Dickies jumpsuits. Each morning, he’d wake up, drink his coffee, and pick out a Dickies jumpsuit for the day, each one with pockets ready to be filled with candies for his grandkids. Such is the mythos of the clothing brand that has ridden shotgun to major 20th-century events, outfitting people from World War II welders in factories to skaters in the 1990s. Dickies exists not just in our past, but as a fantasy for our future selves, a cultural impact the company’s founders probably couldn’t imagine.